We've been anchored in beautiful Taiohae Bay for a week, and it really does seem like paradise. 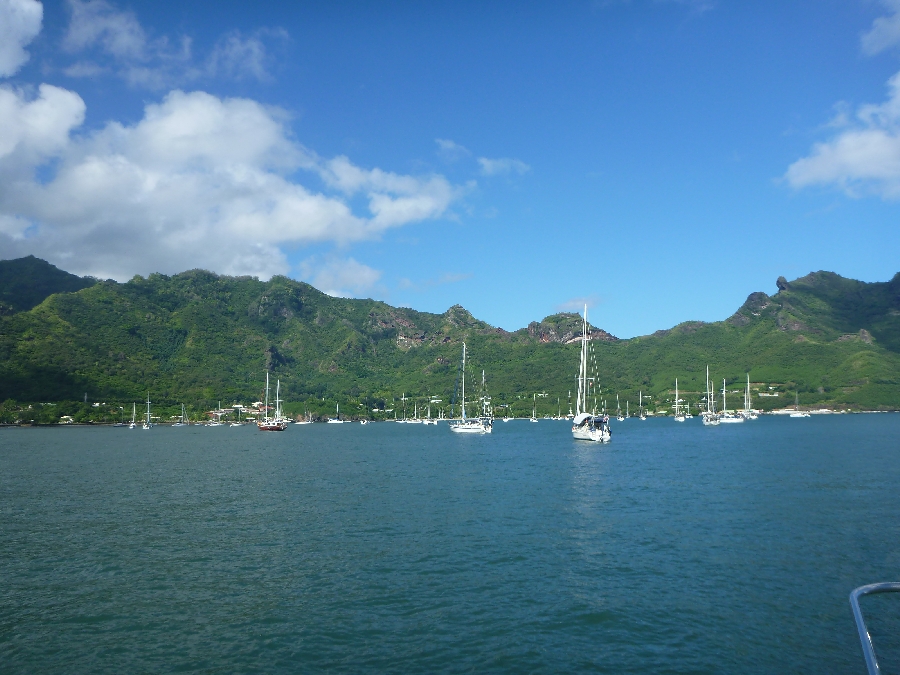 The weather here is mild, but extremely humid. The daytime air temp is a sweaty mid-80s, but as long as there's a breeze – which there almost always is – it's actually quite comfortable. The temperature drops down into the mid-70s at night, making for very pleasant sleeping. The clouds build up over the mountains several times each day and they sometimes drop rain on us, but never for longer than a few minutes. This morning while it was raining I scrubbed the decks so that we can start collecting this free water in our tank. The water temp has hung out around 85-90 degrees, pretty warm. The air is scented with flowers and ripe citrus, with a little bit of smoke occasionally mixed in, from local yard-waste fires.

We've been told that we can swim in the bay, and we've seen lots of kids playing in the surf, but the water is usually tinted brown by the river runoff, making it unattractive to us. Also, there are sharks here, large ones that come in to feed off the fish entrails left by the fishermen. So we'll wait on that.... 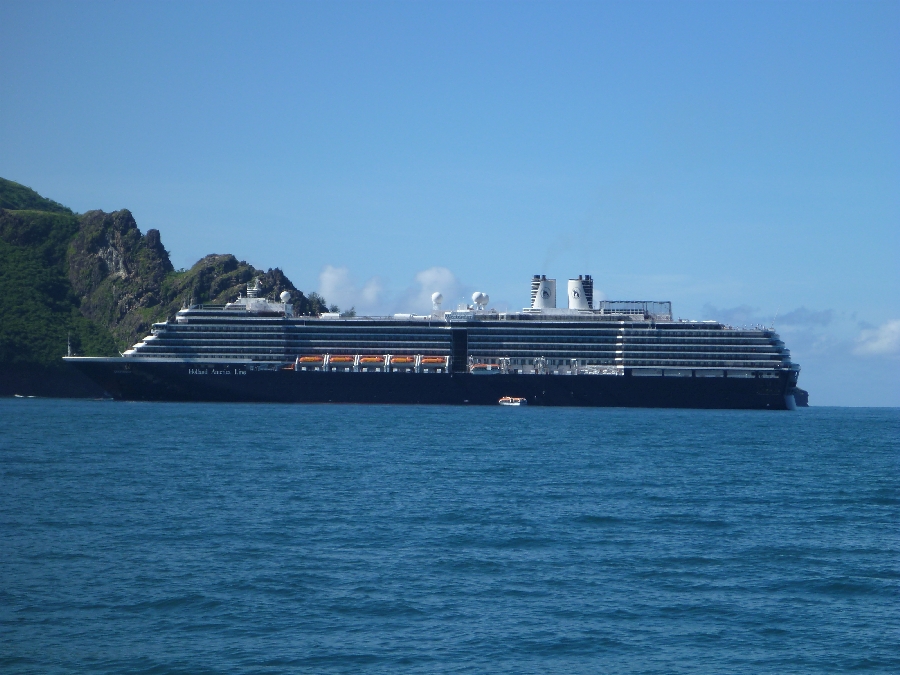 We've been ashore almost every day, dinghying in and tying up to the concrete wharf at the northeast end of the bay. Most of what we need is located right there on the quay, including Yacht Services, where Kevin and his lovely Marquesan wife, Annabella, are ready to assist with anything and everything that cruisers might need. From advice on the intracacies of filling out immigration paperwork (and a lift to the gendarmarie to present your documents to the officials), to expediting the ordering and shipping of parts, to filling of cooking gas (it's butane here, not propane, by the way), to providing tours and rental cars, selling ice cream and local crafts, and even doing laundry, Kevin and Annabella can get it done for you. They're amazing. 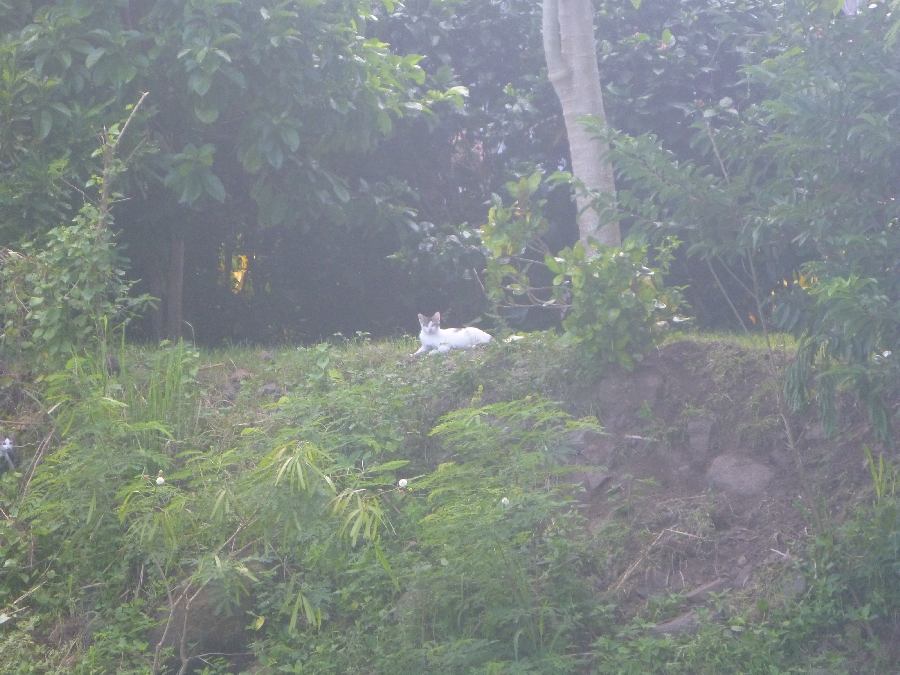 There are two little restaurants near the quay, where I had my first taste of what is now my new favorite food: poisson cru coco – think ceviche with giant chunks of fresh tuna, slices of crunchy local vegetables, all swimming in coconut sauce. What's not to like? They also have fresh grapefruit juice and free Wifi which we've used on a number of occasions.

A produce market is open most mornings, offering local fruits and vegetables: huge pamplemousses (grapefruits), delectable papayas (why do they taste so much better here, than they do in Mexico?), mysterious starfruit, limes, bananas of all sizes (we like the little ones best), and bright green string beans that are more than a foot long. We've been told that if we arrive early enough – like 5 am – we can also get some tomatoes and lettuce, but we will probably never know. We've only begun to sample the local food, but already we know we're going to like it. Eric is excited because they have "real cheese" here.

We're still adjusting to not being on passage. The land moves when we stand still, and our legs are a bit soft. Joints complain a bit after a long walk. It was five nights before I slept through the night. Every night before that, I'd wake up in a panic several times, wondering who was on watch if both of us were sleeping in bed, or I'd sleep fine until midnight, then be awake until three, and then sleep again until seven am. I didn't realize how skewed our circadian rhythms had become, and that it would take some time to unwind them. But it's better now.

It's been great reconnecting with cruising friends who we last saw in Mexico, and meeting new ones. We've also met the crews of other boats who we only knew as voices from the Pacific Puddle Jump radio net each morning. It's been really fun to catch up and hear the fascinating story of everyone's voyage. Every crew had a different passage experience, even though we were all out there at about the same time. The ocean is like that, I guess.

And speaking of the boats in the bay, I find it kind of cool that there is such an assortment of national flags being flown – French and US and Belgian and Australian and many more. But we're all in the same club in one way: every single boat in this bay had to make a lengthy passage to get here, with its own story. There are no shortcuts to Polynesia by boat.

On Friday evenings at 5:30, many of the English-speaking cruisers gather for happy hour at the Hee Tai Inn. It's a fun place to meet people and have a good dinner.

Soon after we arrived, Eric began tackling repairs and maintenance; and I began to return SCOOTS' cabin space to "living" mode from "voyaging" mode. 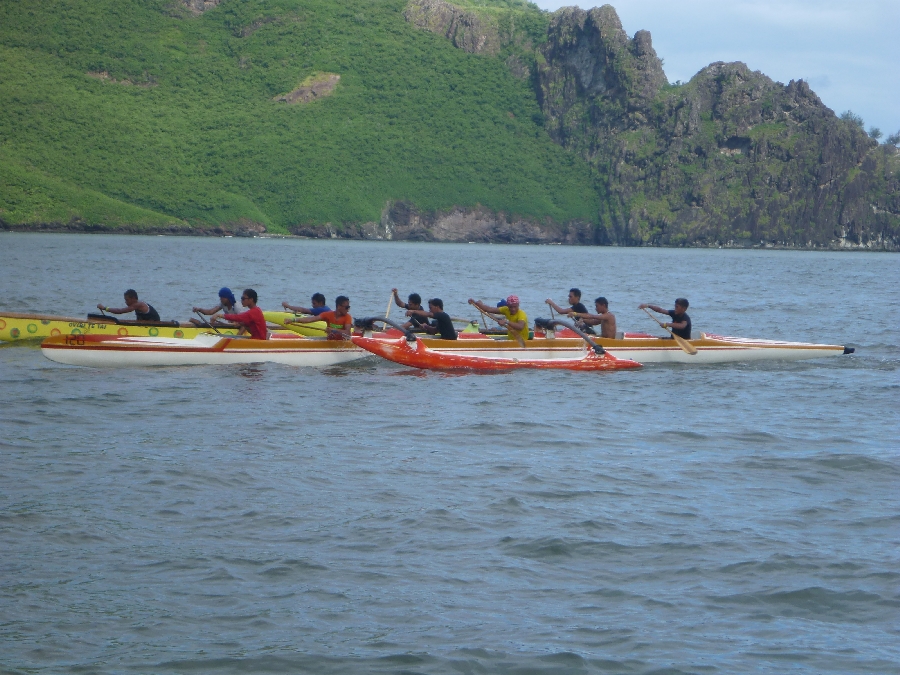 Eric worked with Kevin to get a quote for a new radar system. Though more than 20 years old, SCOOTS' radar worked great...until three days before we arrived. So we need a new one. The new radar has now been ordered and will arrive through Tahiti, with all the customary extra import fees added on, in a couple of weeks. Ka-ching.

Eric also went up the mast to check on the situation with our former foredeck light. He discovered that the sad little wire sticking out of the mast powers the still-extant, though currently nonfunctioning, steaming light, so he'll be able to fix it; the wires that powered the now-somewhere-on-the-bottom-of-the-ocean foredeck light are inside the mast, so we won't be able to fix that for awhile. 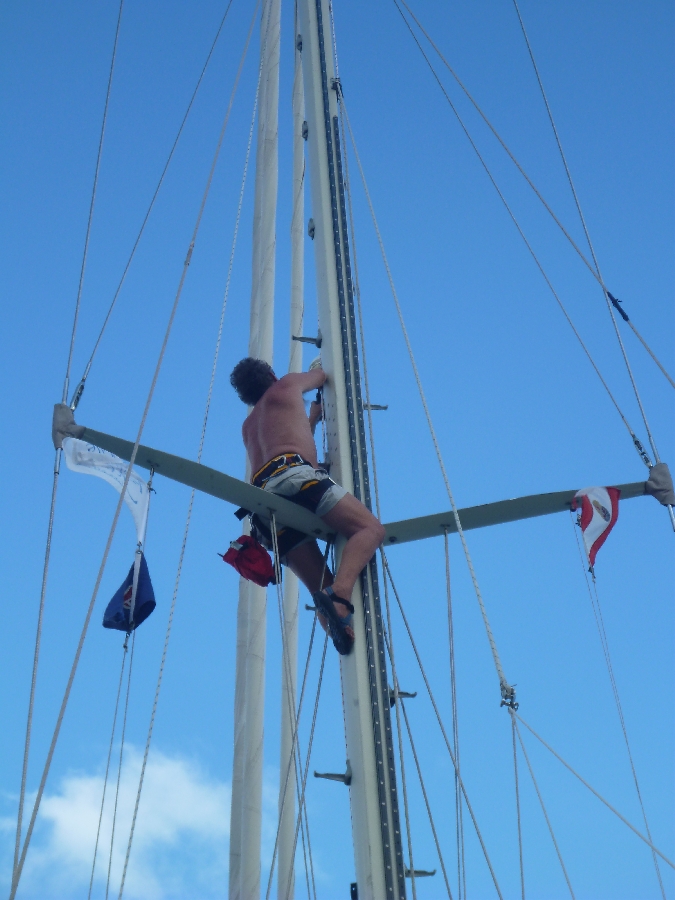 He also checked around to see if our shredded Code 0 could be repaired here. Answer: no. Maybe in Tahiti....Or, maybe we'll just need to buy a new one.

I've been making SCOOTS into a comfortable home again. Fresh sheets on the bed, clean surfaces in the galley and head and cabins, drops of lavender essential oil here and there, having our laundry washed, dropping our trash in the bins on shore, restowing the random stuff that ended up on all the horizontal surfaces... I moved all the supplies that were stored in our forward bunk for the passage, back into the aft cabin, so we can sleep forward again, under the big hatch and with three fans going.

We haven't seen much of the island yet, though we are hoping to schedule a tour soon. We went on a little hike with our friends Morris and Debbie the other day, along a concrete road, which turned into a dirt road, which then turned into a small dirt trail that led into a forest. 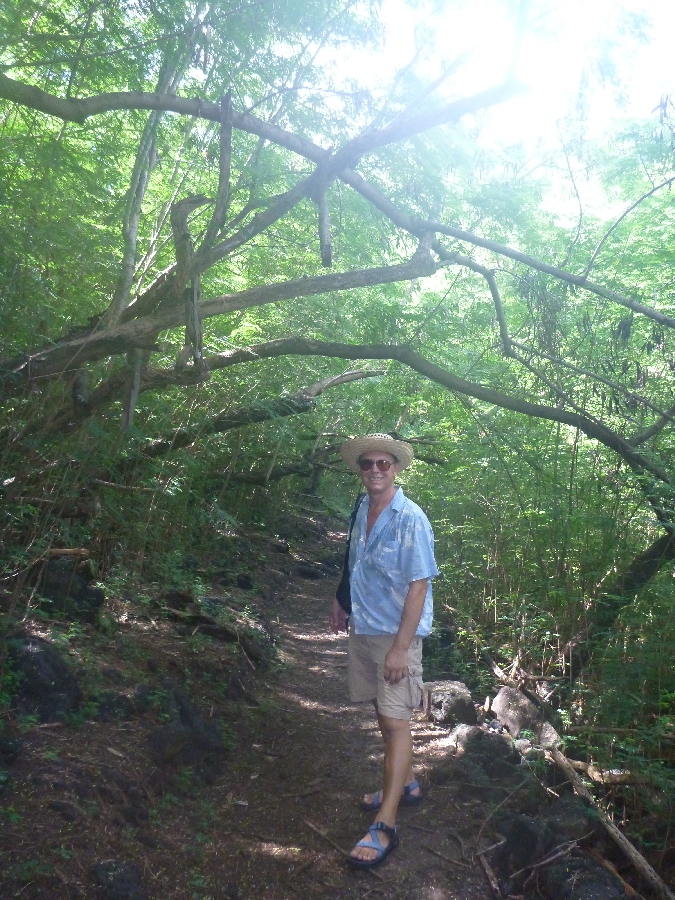 Walking along under the shady canopy, being serenaded by birds, was fabulous! I can't wait to explore the rest of the island!
Comments
Newer Older
Contents