Update! Photos to accompany "A Tale of Two Hikes" can now be found in our Gallery in the folder called "Two Hikes." I took most of the Anaho photos; Eric took all of the Hatiheu photos.

After completing our slow circumnavigation of Nuku Hiva, SCOOTS is again anchored in Taiohae Bay. For the past couple of weeks, we sampled the island's northern and western anchorages, enjoying our time in each one. The map below shows the anchorages we visited on Nuku Hiva. We haven't visited Controlleur's Bay, just east of Taiohae Bay, though its three anchorages are reported to also be stunning. 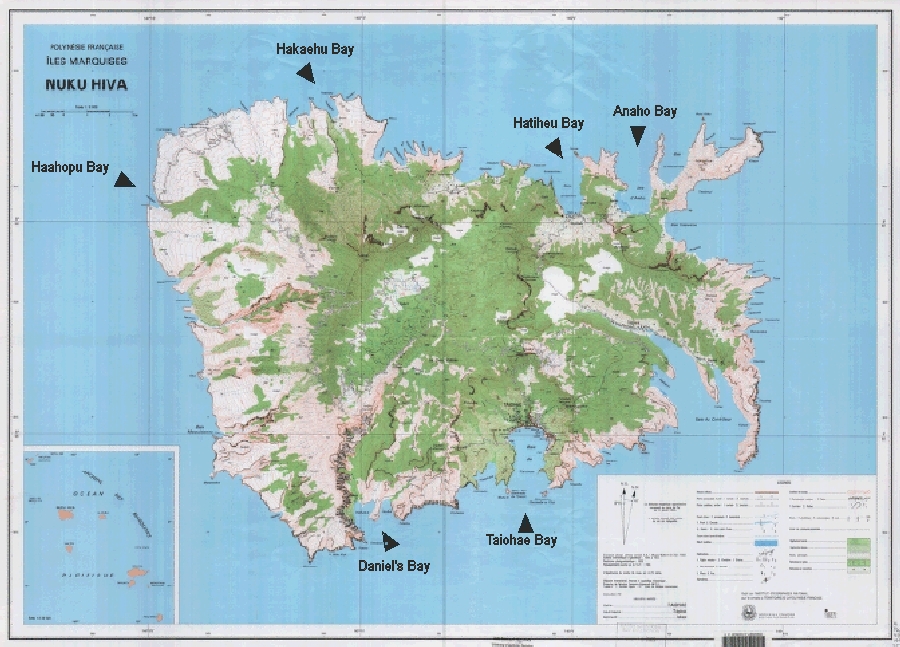 Hatiheu Bay 08 49.55'S, 140 05.0'W
After a fun (and sometimes muddy) stay at Anaho Bay, we made a quick stop in rolly Hatiheu Bay to avail ourselves of its WiFi, to check on the status of our new radar. The radar had made it to Tahiti, but we were bummed to learn that it was being held up due to some customs paperwork. A call to Kevin at Yacht Services confirmed that he had taken care of the customs issue, but he further bummed us out by telling us that Air Tahiti was having a strike, which would further slow the arrival of our radar into Nuku Hiva. No sense in hurrying back to Taiohae Bay... So we moved along to Hakaehu Bay, a few miles down the coast.

Hakaehu Bay 08 47.3'S, 140 10.7'W
Open to the northwest, Hakaehu Bay is calm and sheltered; the rocky headlands of the bay absorb most of the energy of the boisterous eastern swells that gallop along the northern edge of the island, creating huge white plumes as they smash into the shore well away from the anchorage. 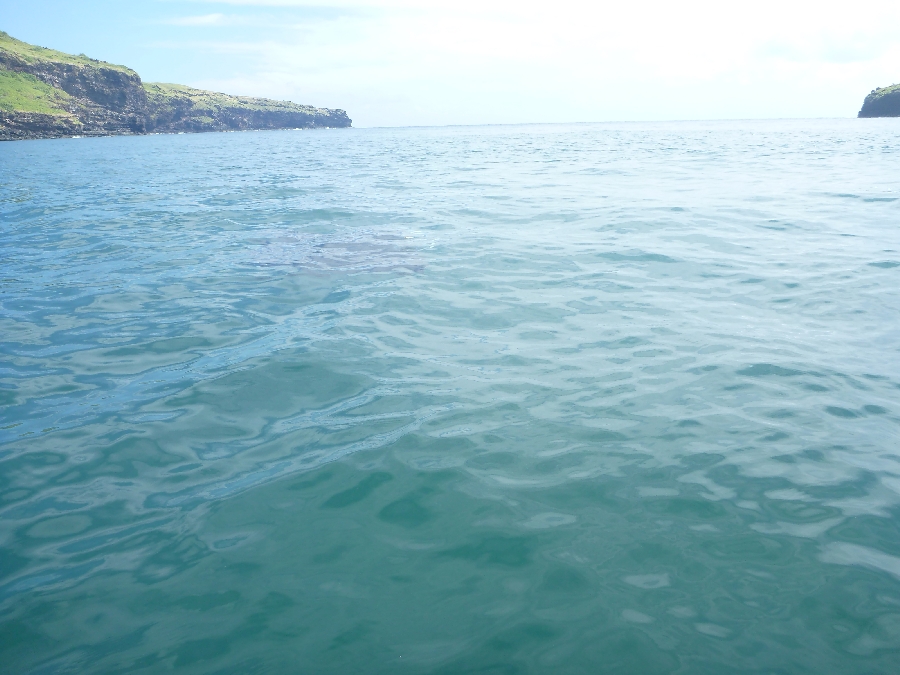 The bay is framed to the east and west by tall, shrub-covered cliffs, popular with the many resident wild goats, whose baaaaing voices waft out over the water throughout the day. 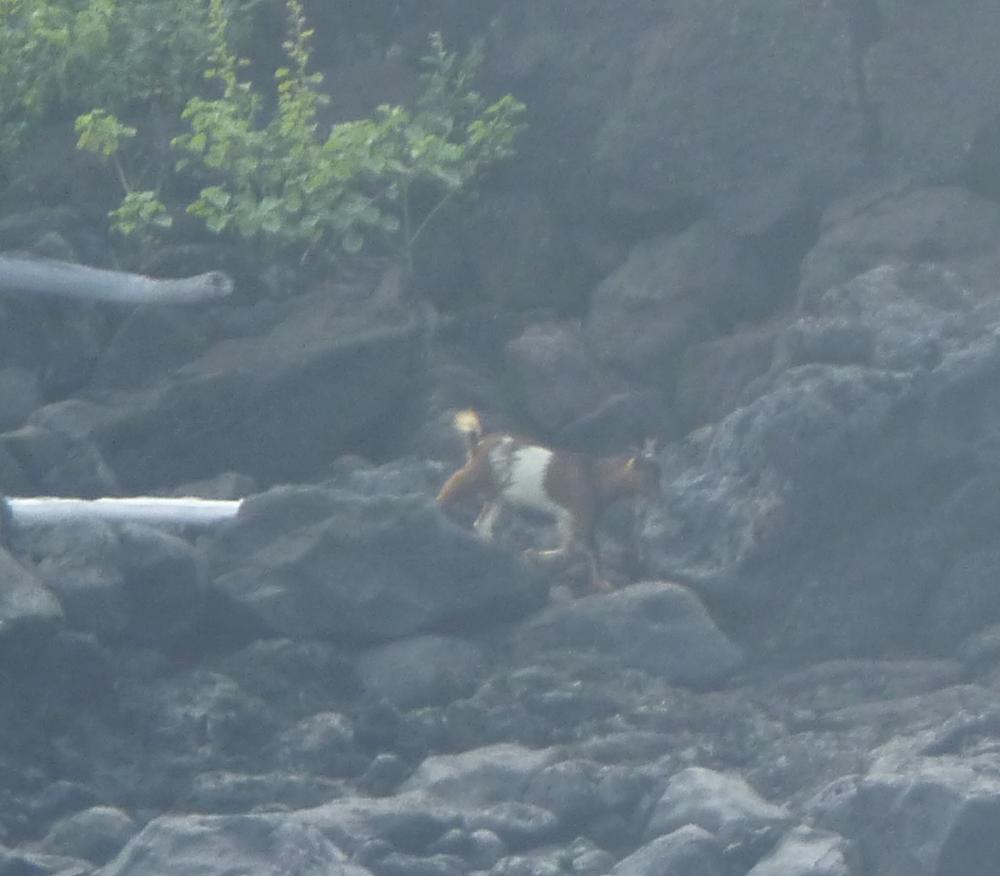 To the south, beyond the crescent beach, stretches the verdant Pua Valley, also known as the "Valley of the Chiefs," which shelters an extensive coconut palm grove and the remains of a large ancient civilization. Also to the south, overlooking the valley and the bay is a majestic, jungle-clad mountain. On shore, a Marquesan family – mom, dad, little girl – played on the beach and fished the shallows with a seine net. 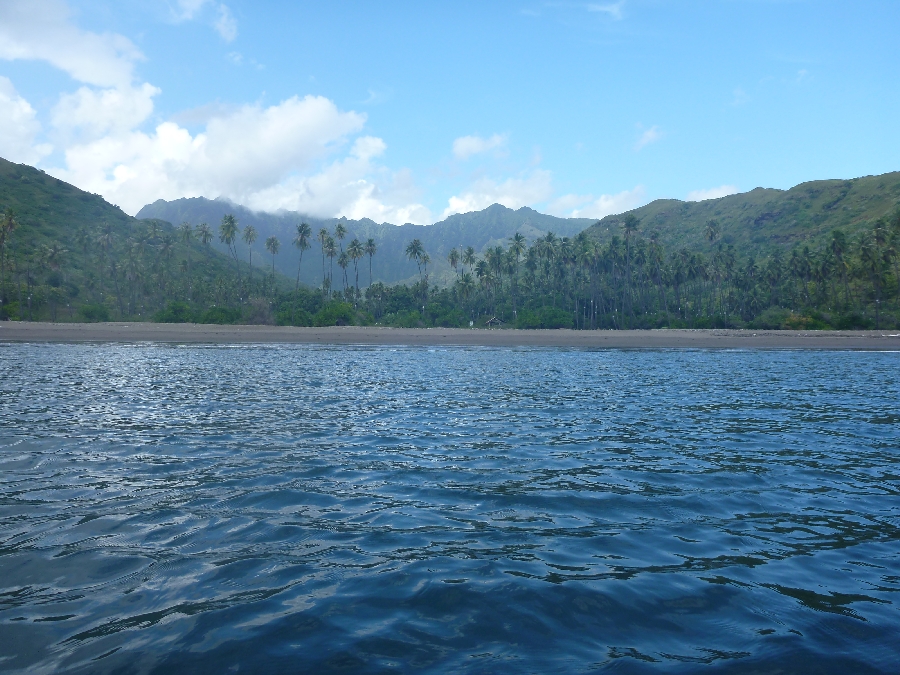 We had the anchorage to ourselves for two days. While we were there, we spent time reading, goat watching (okay, that was just me), kayaking, and taking care of some boat projects. 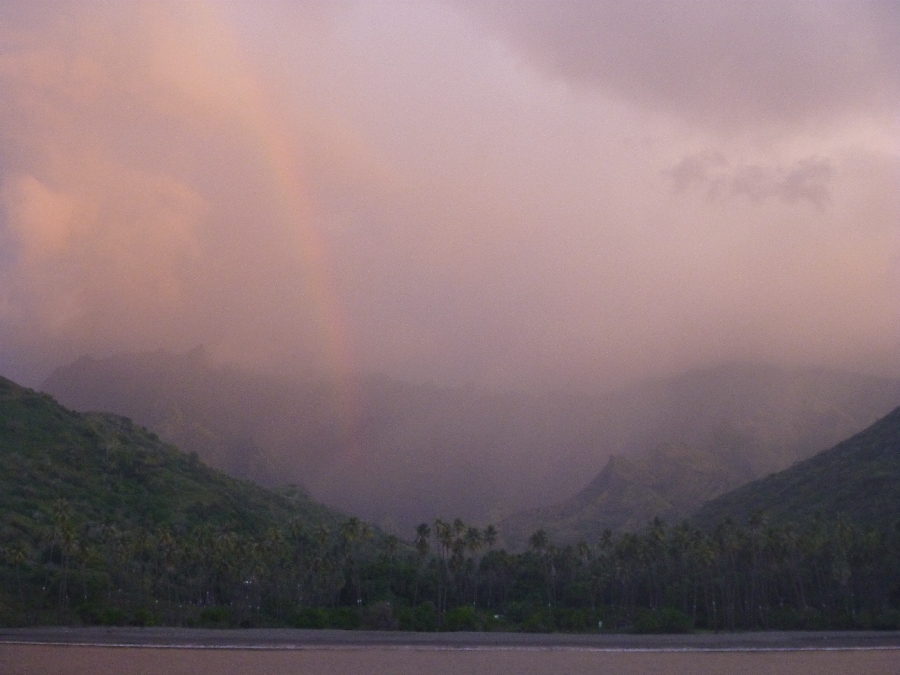 Three different species of wasps frequented our boat, some of them just passing through, others looking for places to construct their mud nests. (For a detailed description of the ghoulish practices of nesting mud daubers, check out our blog entry, "Still catching up...Playa #2 and San Francisquito" from Nov. 4, 2015.) After finding and dismantling several partially-built mud nests attached to various books, we also found a completed mud dauber nest that was stuck to the ceiling behind the bookshelf above our bunk. We were tipped off to its general whereabouts after finding a zombie spider splayed on our bedsheets. The nest and its contents were given a burial at sea. 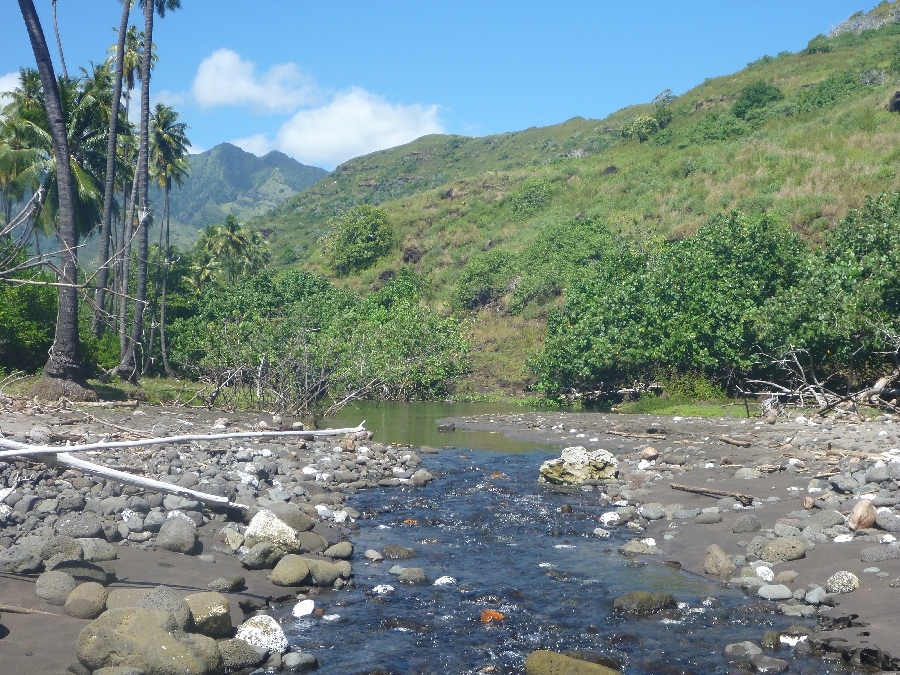 One of the two clear streams

We dinghied into shore one day, hoping to meet the Marquesan family and give them some chocolate chip cookies we'd baked, and to ask permission to explore the green valley where they lived. We never met the family, but we did meet three friendly Marquesan men in a house near the beach. They spoke Marquesan, some French, and very little English; we spoke English, very little French, and except for the word for "hello," no Marquesan whatsoever. We handed them the plate of cookies, and through hand motions and our pooled limited linguistic resources, we were able to ask and receive permission to walk the valley, and to understand that when we returned, they would have some fruit for us. Cool! 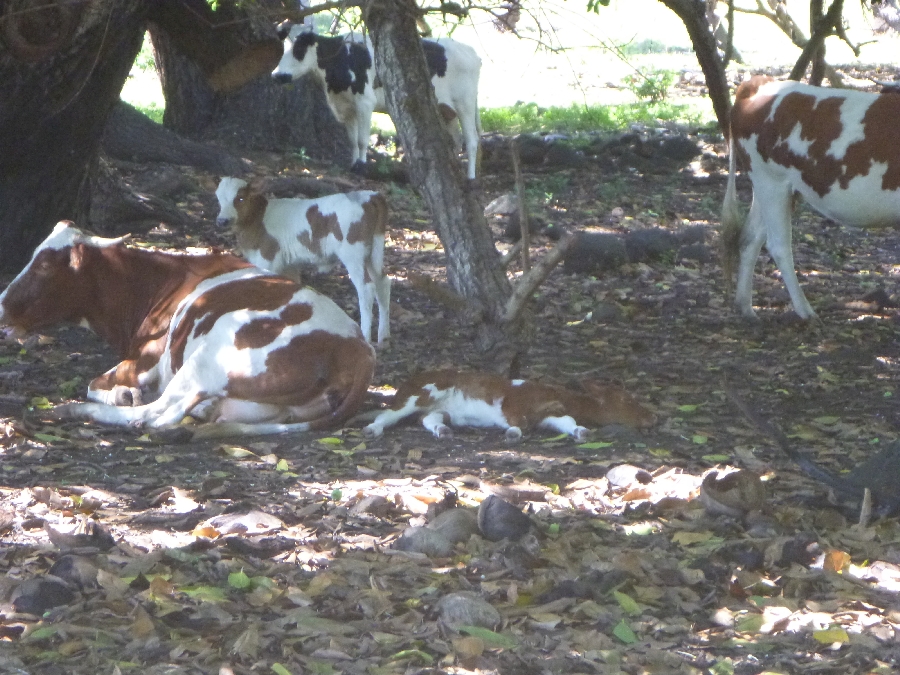 We walked along an ancient Marquesan road, constructed of level inlaid stones. Beside the road were stone platforms, known as "paepaes," on which houses had stood. It was fun to imagine thousands of people living here. 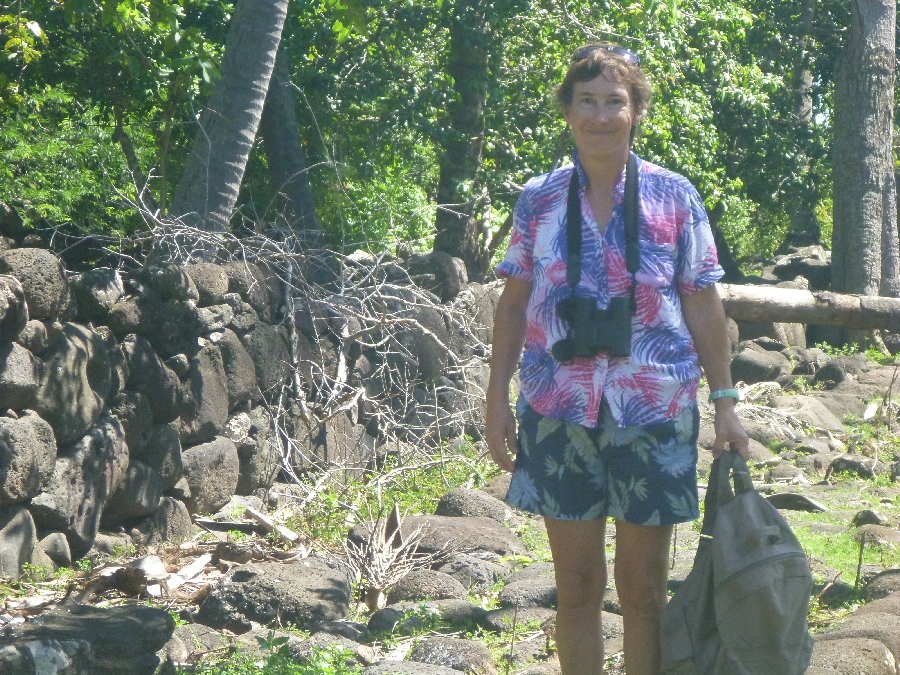 Fewer than ten people live in this valley now, along with a handful of cows, horses, dogs and goats, 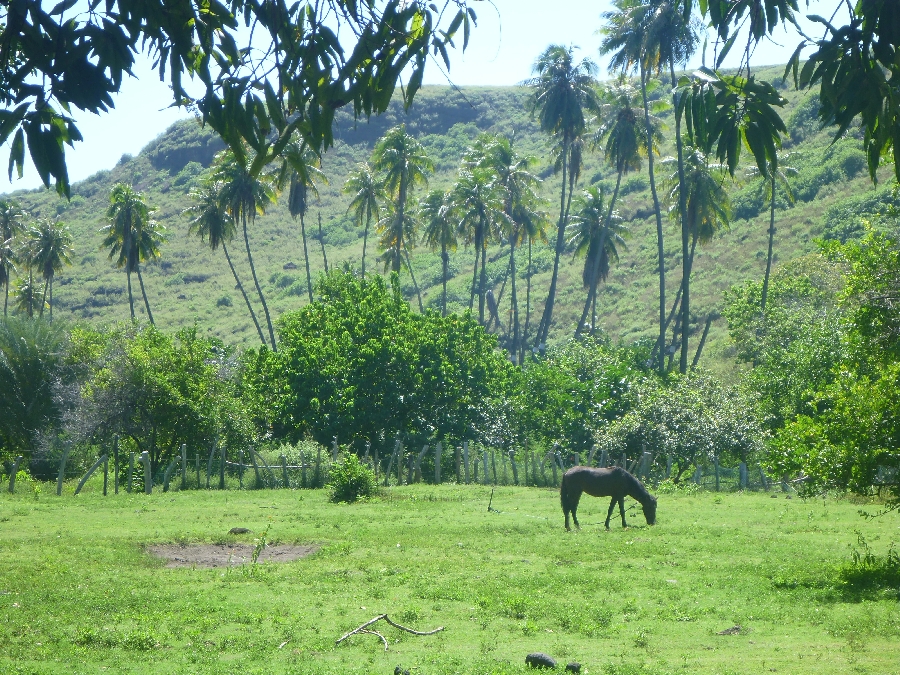 and modern contraptions contrast with the ancient structures. 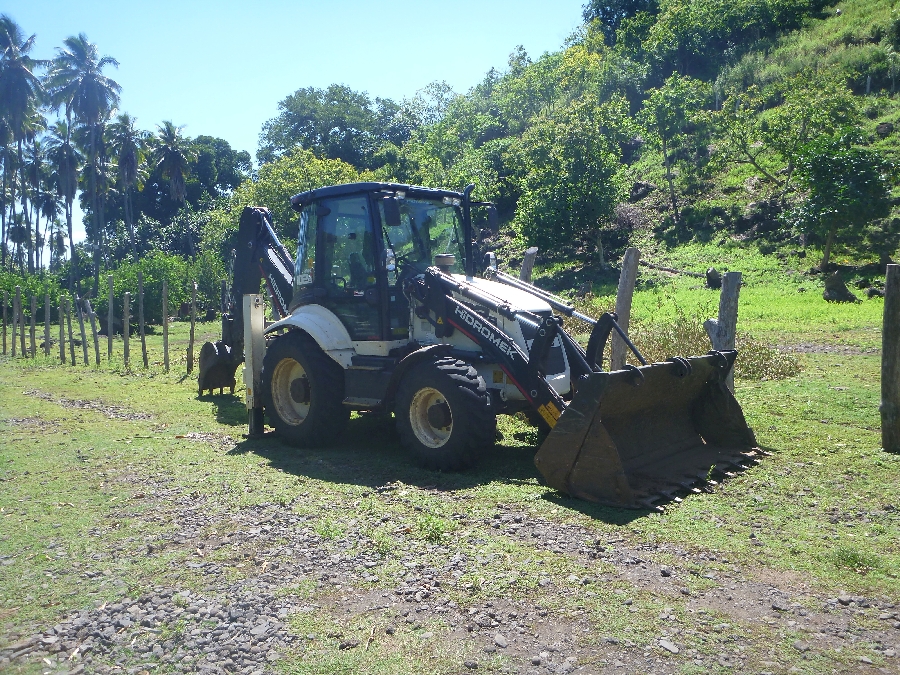 Towering breadfruit trees, arranged in rows, provide fruit for the residents and nest sites for black noddies, dark tern-like birds with white caps. We spotted many of the small cuplike nests – some with the parents in attendance. (I didn't know they nested in trees....) The many coconut palms were laden with coconuts, from which the residents produce copra (coconut meat used for making coconut oil). Pretty streams ran along both edges of the valley, eventually emptying into the bay. We walked for awhile, stretching our legs and enjoying the sounds and sights of the forest and fields.

Back at the mens' house, we found a large sack filled with fruit for us: a dozen pamplemousses, each bigger than our head; two hefty papayas; a couple dozen juicy Marquesan limes. The bag weighed about forty pounds. We thanked the men – who said the cakes we gave them were good (they didn't know the English word for "cookies" and we didn't know the French word, so we'd settled on "cakes"). Fortunately, Eric didn't have to lug the heavy sack too far to our dinghy on the beach.