Shortly after we returned to Taiohae Bay, our radar and chartplotter finally arrived! We picked up the three big boxes containing the components on a Saturday afternoon, started the installation on Sunday morning, and were done on Tuesday. Of course, we only worked on it during the day, reserving the evenings for socializing with friends, including listening to our San Jose Sharks play in the Stanley Cup Finals over the wifi. 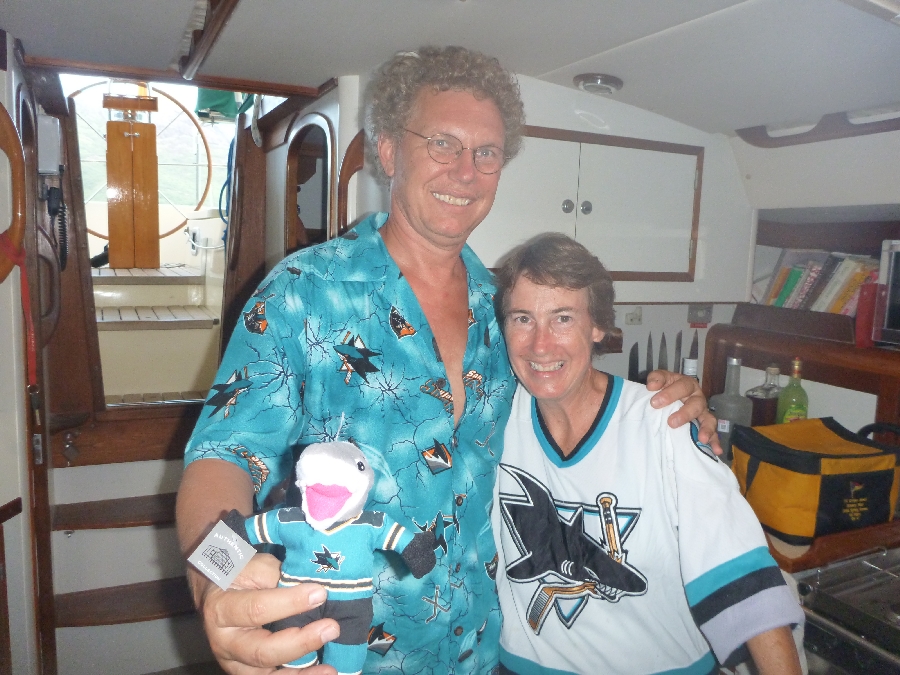 The installation required many trips up to the top of the radar arch, where we balanced tools, the radar machinery, and ourselves, in the frequently rolly anchorage - and as many trips back down again. It also required a trip to the local hardware store to purchase a 1-inch drill bit. This turned into an impromptu guys' trip as Eric brought our friends Morris and Tom along because who doesn't like to peruse a hardware store? 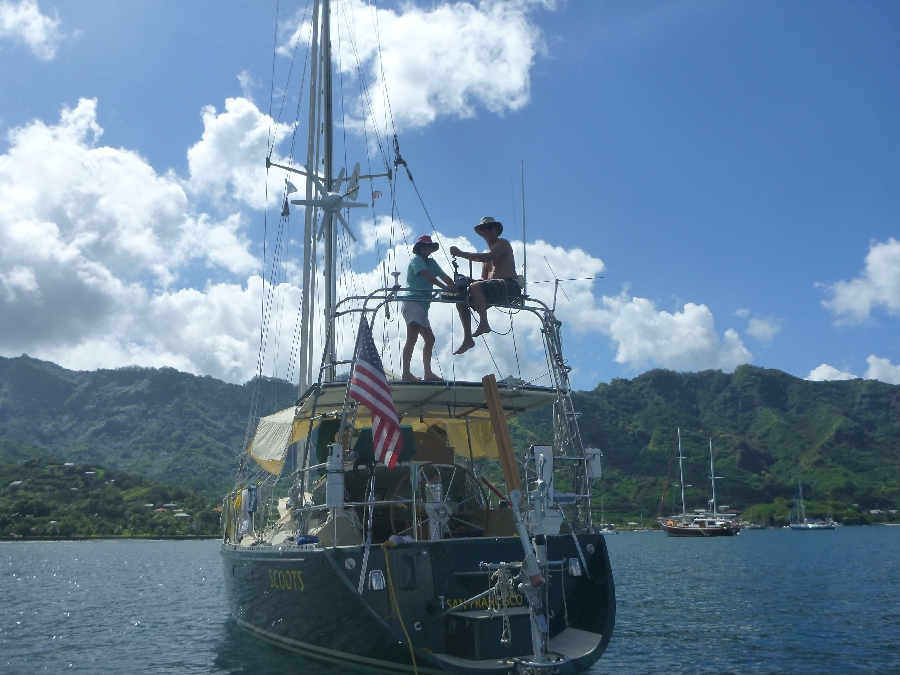 On the radar arch

We also needed to drill four new holes in the stainless steel plate beneath the radar, as the pattern of holes needed for the new radar was different from the ones already there. Fortunately, Eric had brought along our big, heavy Cole hand drill, which can cut through stainless steel, though it takes awhile. Unfortunately, it's stored in a cubby waaaay back under the mattress in the aft cabin, which is currently crammed from bunk to ceiling with storage (hey, we're on a long trip, give us a break). So we had to redistribute the items from the aft cabin all over the rest of the boat, which looked "like a bomb had gone off inside of SCOOTS," according to one of our brutally honest friends who happened to visit during the process.

We would have had to empty the cabin anyway, so that we could remove the ceiling there to allow access to the wiring above it during the part of the radar installation lovingly known as "threading the wire." 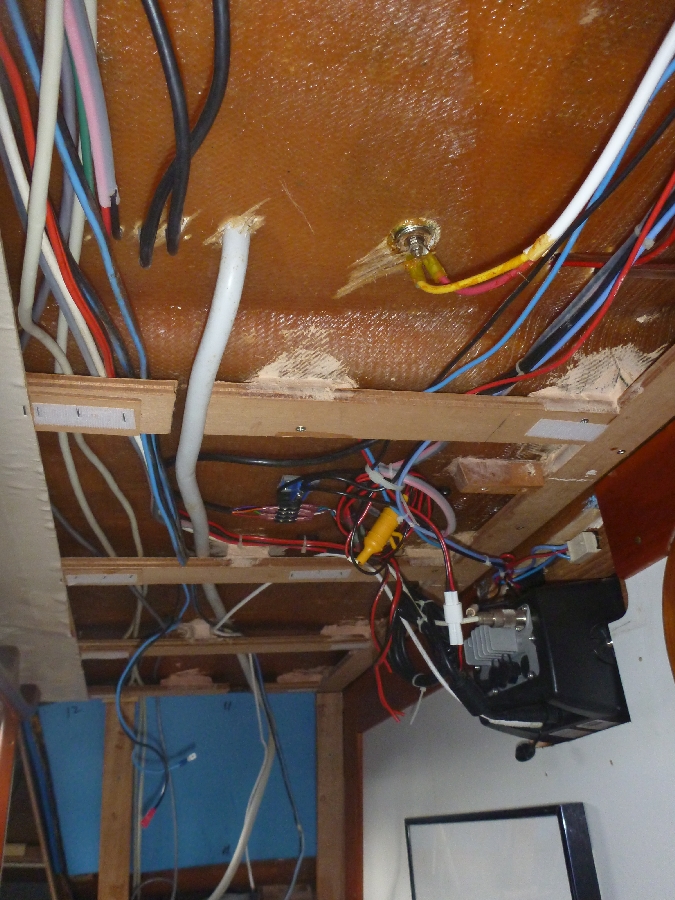 This part of the process went well enough, the wire being lubricated with a smattering of sailor words and a prodigious amount of perspiration, as it snaked its way from the top of the radar arch, down through the radar arch tubes, through Hell (as we call the cramped space beneath the aft part of the cockpit), up into the aft cabin ceiling, through the hanging locker, then up to the new chartplotter perched under the dodger in the forward part of the cockpit.

When the radar was installed, we fired it up and were happy to see lots of bright red blobs appear on the chartplotter screen, in the exact positions where boats were anchored. In other words, it worked! 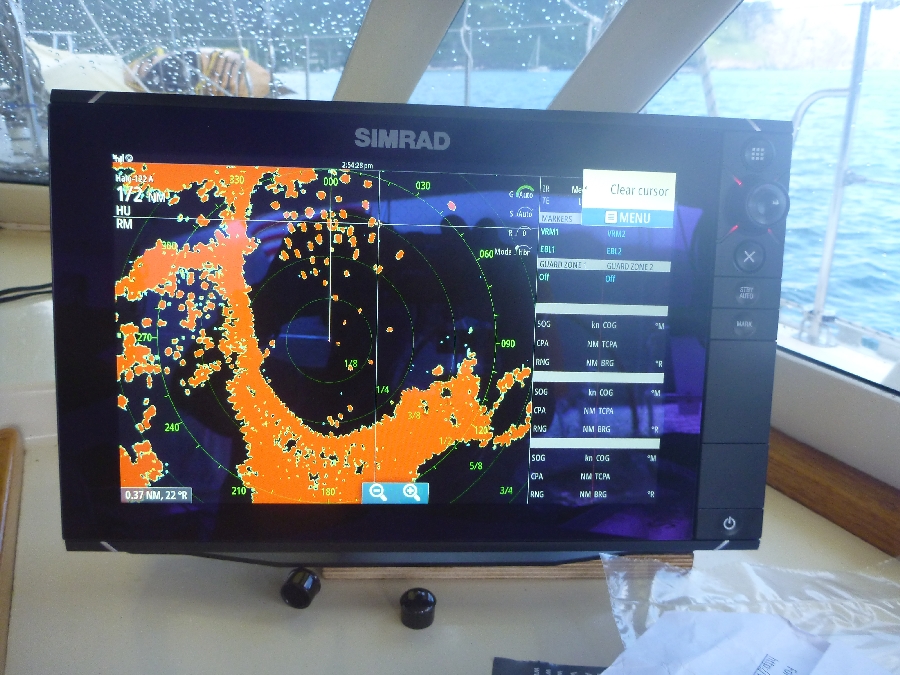 And, a surprise feature of dubious benefit, our radar is also equipped with two sets of blue LEDs, one on each side of the device, that will allow us to light up the stern of our boat like a disco, with a night-vision-destroying, UFO-like blue glow. In case we ever want to do that.

With the radar installed, and our Sharks beaten in the Stanley Cup Finals, it was time for us to leave Nuku Hiva. But not without one final hurrah...our friends Tom and Sylvia from s/v Cinnabar arranged a land tour for six of us: themselves, Eric and I, and Morris and Debbie from s/v Impulsive. 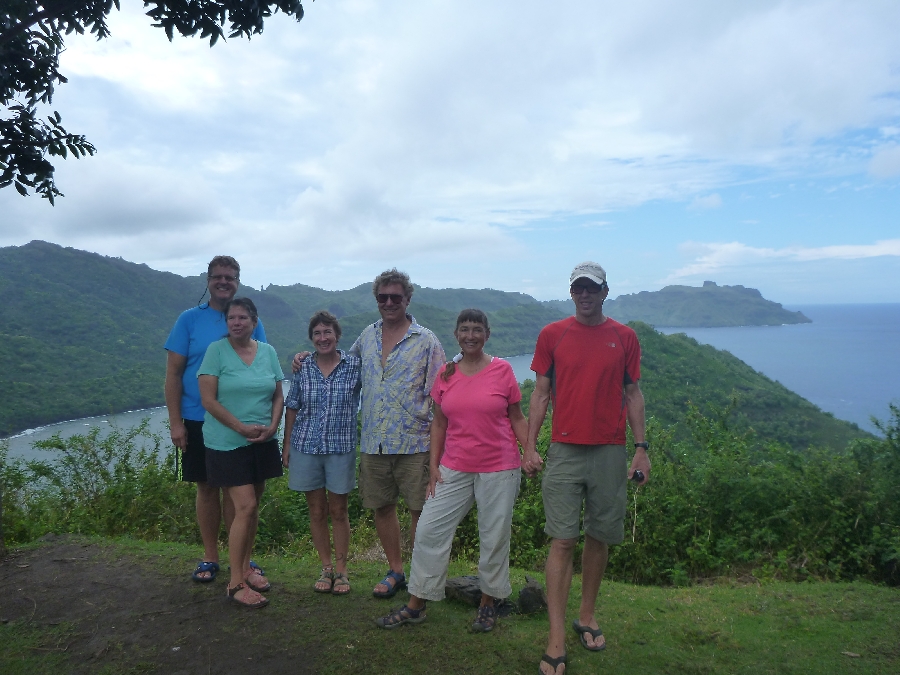 So on one particularly swelly day, when our boats were rolling like crazy and we all needed a break from the rock and roll, we dinghied to the small quay and met Jocelyn, our tour guide for the day. Jocelyn drove us all around the island, stopping at breathtaking overlooks, fascinating archaeological sites, and modern cultural centers, sharing all sorts of interesting information along the way, including these Fun Facts...

Fun Fact #1: the first butterflies arrived on Nuku Hiva only 13 years ago, as stowaways on some road construction equipment brought from Tahiti.

Fun Fact #2: False acacia trees, which now cover most of the island, were planted on Nuku Hiva with the intention that livestock would eat it. Unfortunately, they don't eat it. Also unfortunately, the trees produce large pods with seeds that are scattered on the wind, making their proliferation the floral equivalent of a wildfire. Oh well, another attempt by humans to "fix" nature gone awry.

Jocelyn also gave us a resident's view of what it was like when the first Survivor season was shot in two different bays on Nuku Hiva (Daniel's Bay and Controller's Bay) in 1999. In short, there were good aspects (Wifi was installed on the island so that the producers of the show could communicate easily with the rest of the world) and bad aspects (the two bays and the land surrounding them were off-limits for the duration of the filming).

We stopped for lunch at Yvonne's Restaurant in Hatiheu, where Eric, Morris, and Tom had a pancake breakfast on the day they hiked over the hill from Anaho Bay. Though Sylvia, Debbie and I had declined to make that hike, we eventually got to visit Hatiheu, and eat at Yvonne's, after all. Afterwards, Jocelyn took us to the archaeological site that the guys had visited, and filled us in on all the details as we walked through. 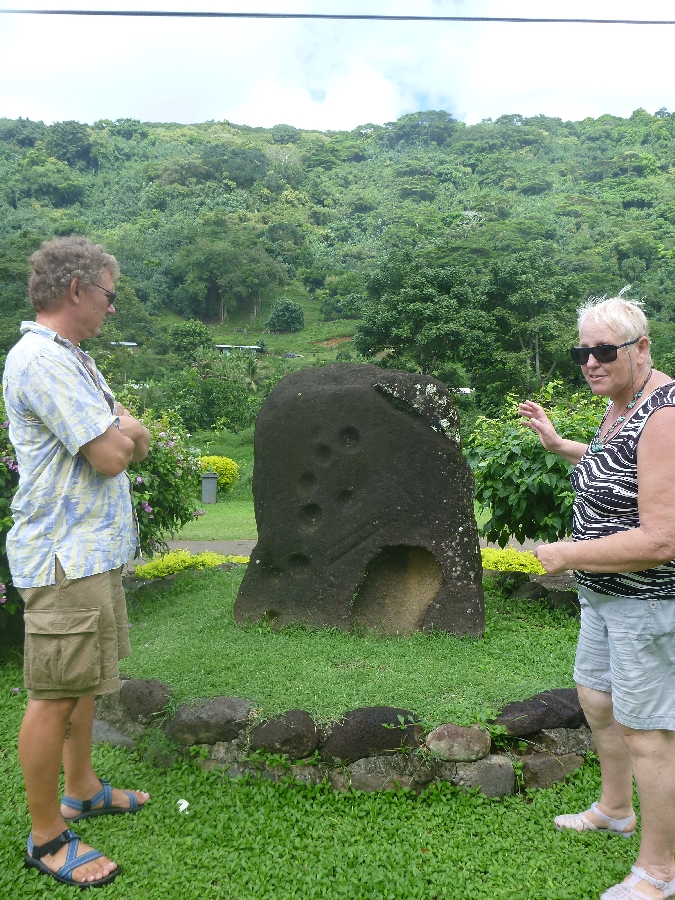 Eric getting the details

Fun Fact #3: Banyan trees like the one below are sacred to the Marquesans and are never cut down. Ancient Marquesans used to stash human skulls among the roots, some of which are still being found today. 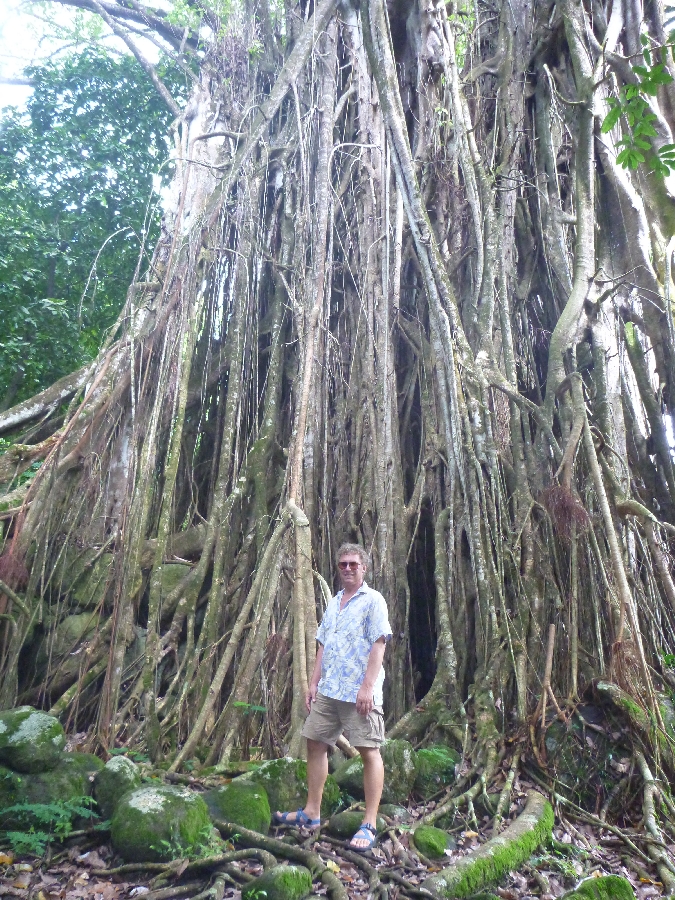 Eric and the banyan

Trip #1. We said goodbye to Nuku Hiva on June 11, seven weeks after first arriving. We headed out of Taiohae Bay in the late afternoon, headed for the island of Tahuata, about 85 miles away to the southeast. 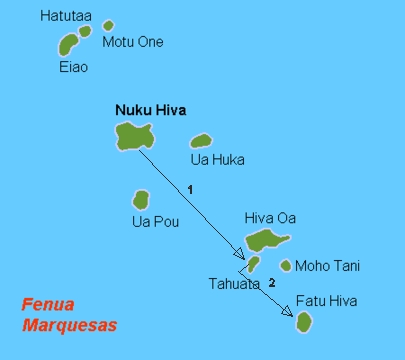 Map of the Marquesas

This would be an overnight trip, the first since our Pacific passage. It was nice to be out on the open ocean again, and we had fun trying out our new radar and chartplotter. The night passed uneventfully, and when the sun rose, we could see the dark shapes of the islands of Hiva Oa and Tahuata up ahead.

Six boats were already anchored in the bay, so we took a spot on the edge of the pack. The bay is lovely, with clear water and fish that will come to the boat if you feed them. It's like floating on an aquarium. 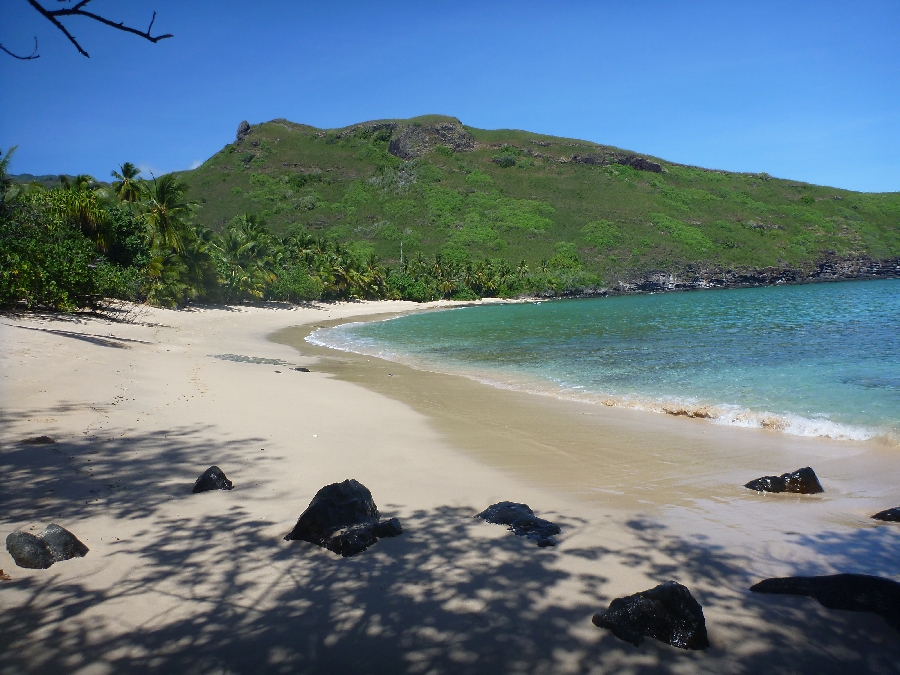 During our time at Hanamoenoa Bay, we went snorkeling and kayaking, and explored the white sand beach, and yes, did some boat projects. We met five sailors on two boats from Norway, a single-handing Swede, a woman from Brazil, a man from Portugal, and a couple of Americans. One afternoon, we all met on the beach for a lunch potluck, which was a lot of fun. 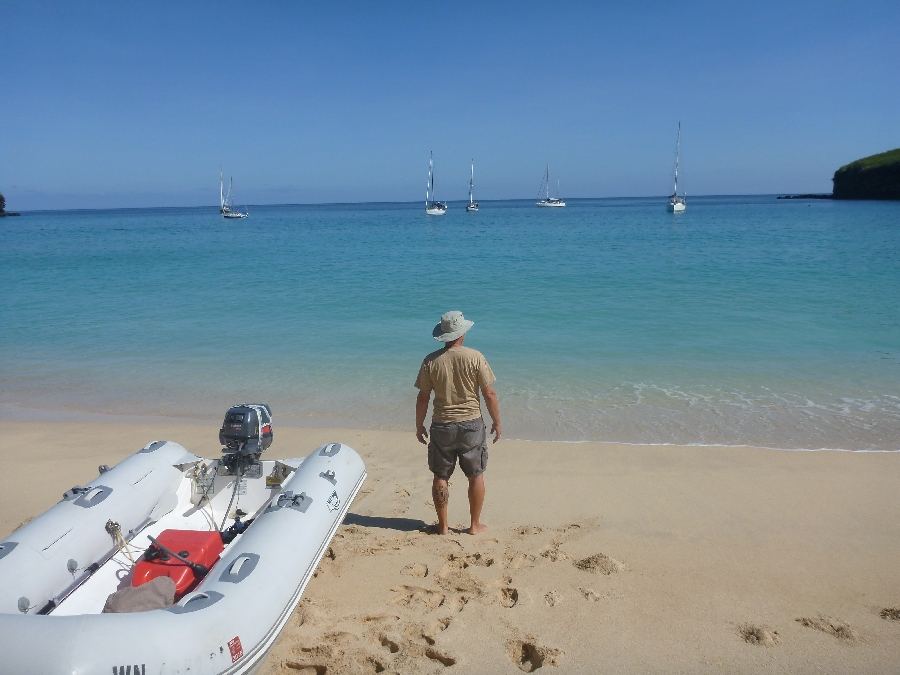 At sunset, four of the boats set sail for Nuku Hiva. Eric conched them all out of the anchorage. We arrived as strangers and left as friends. That's one of the things we love about cruising. 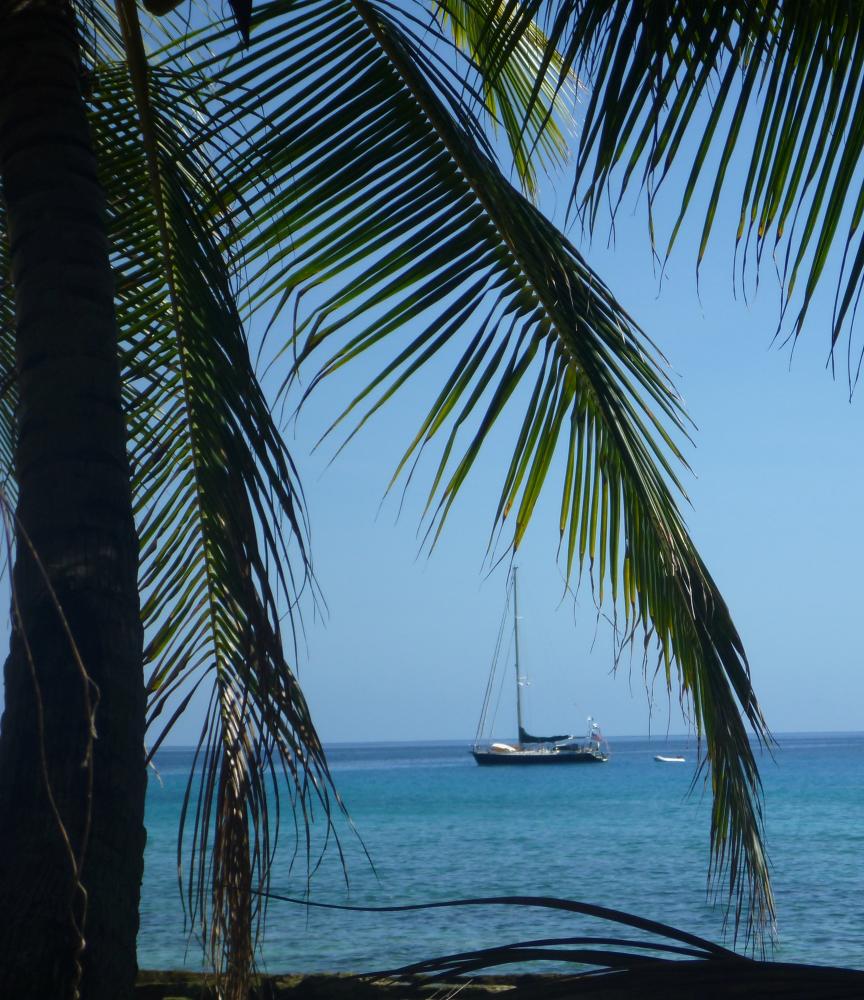 Trip #2 from the map.
After a wonderful week in Hanamoenoa Bay - which is currently my favorite bay in the Marquesas - we set sail for the island of Fatu Hiva, home of the famed penis rocks, 45 miles way. We had a spirited upwind sail, in 15-20 knots of apparent wind, with 1.5 meter seas, many of which SCOOTS used to wash her bow and the kayak. No worries; Fatu Hiva is also know for its rain. 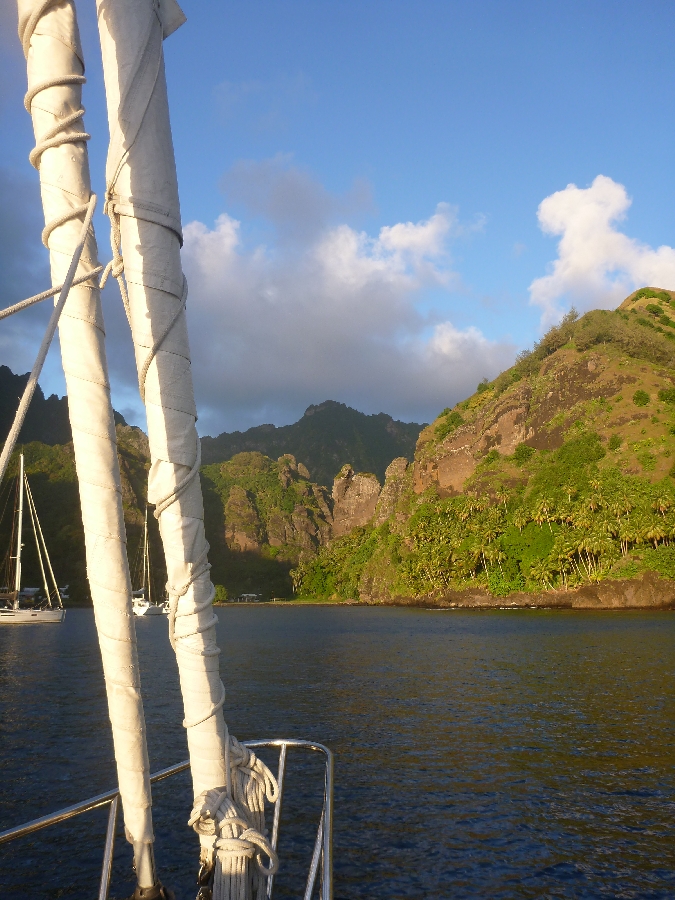 We arrived in mid-afternoon, joining five other boats who were already anchored in the part of the bay that has reasonable depths, so we motored to the edge of the pack and anchored in 80 feet. We have lots of room here, which is good, because as the wind funnels up the bay, it sets all the boats to dancing around in the shifting wind.


Fun Fact #4: Hanavave Bay's original French name was Bay of the Penises. When the missionaries came, prudes that they were, they renamed it Bay of the Virgins. I wondered, why virgins? Why not some other, equally Christian-approved name? Well, it has to do with the French language...Bay of the Penises in French is "Baie des Verges"; Bay of the Virgins is "Baie des Vierges." So by misspelling the name by adding one little "I" the missionaries were able to de-phallus the name. But the rocks are definitely still here. As is a cool rock formation that looks like - depending on whom you ask - the Virgin Mary, or the knight from the chalice room in "Indiana Jones and the Last Crusade," or the face on Mars, or Jesus, or the devil. An interesting variety of opinions, don't you think? What do you think it looks like?