What is that critter? Revealed! A big thank you to John for reminding me to tell you what the critter in the water was. Sometimes I get caught up in the here and now and forget to go back and see whether I left you hanging.

Anyway, take a look at the photo of the critter.

If you look very closely at the bottom of the critter, you'll see a tail tucked around to the right.

Those two black disks are not eyes, but are distracting coloration around two clear pectoral fins, which you can't see in the photo.

Just up and to the left of the right black disk, you'll see a small bulge. That's an eye. There's another one to the left, but it's harder to see.

Just up and to the left of the eye is another smudge of brown, which is a mouth.

Up from that is a large area of prickly-looking white. That's a belly.

Can you see what it is now?

Here's another picture of the same kind of critter, in someone's hand... 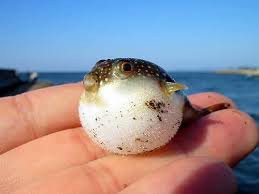 Scroll down for the answer...

It's a puffer fish!

A minute after we took the photo, it decided that running away was better than puffing up. It deflated quickly and swam away.