Work and play in Papeete, and a Fun Fact After leaving Fakarava, Eric and I made landfall on the island of Tahiti about two days later at Point Venus, the headland of a large, unobstructed, coral-free bay. This was a welcome change from the coral-studded anchorages in the Tuamotus, and a good spot to make landfall, especially at 2:30 am when we arrived. We were able to anchor quite comfortably in the dark, using our radar, our depth sounder, and our eyeballs to make sure we were situated in a good spot, before falling into bed for a few hours' sleep. 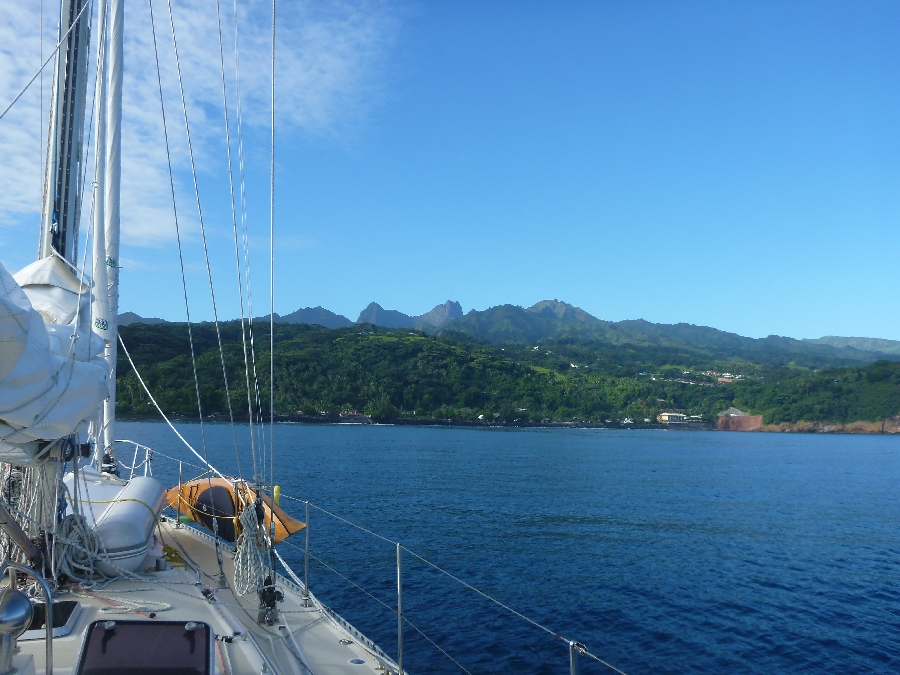 The quiet anchorage at Point Venus

A few hours later, we pulled up our anchor and moseyed down the island and into the main pass at Papeete (pronounced "pah pay ay tay"), the capital city of Tahiti. The pass is narrow, with a dogleg to the left, so boats wishing to enter are advised to call the port captain to make sure there's not a cruise ship, cargo supply ship or other large vessel intending to exit at the same time.

Megan and Matthew, friends of ours who came this way last year in their boat, Daybreak, had raved about the new city marina, Marina de Papeete, so we took their recommendation and steered SCOOTS into a slip there. We were very glad we did! This marina, in addition to being clean and new, is right downtown, within walking distance to anything you might want to walk to. Which was all particularly useful for us, as our time in Papeete was going to be very chore-intensive.

And, cruisers take note: in addition to being centrally-located, Marina de Papeete had REAL SLIPS, so you don't have to mess around with Med-mooring like you would at Marina Taina, the older marina further down the channel. 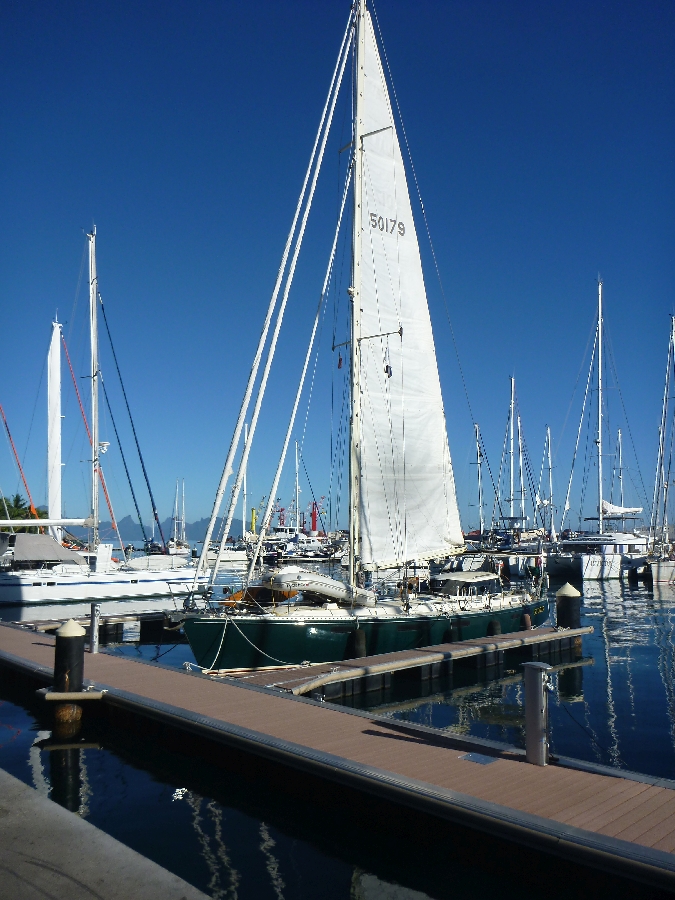 The part of Papeete that was within walking distance from the marina, which was the only part we visited, was nice, an interesting combination of Polynesian and French influences. Like Honolulu, only with baguettes. 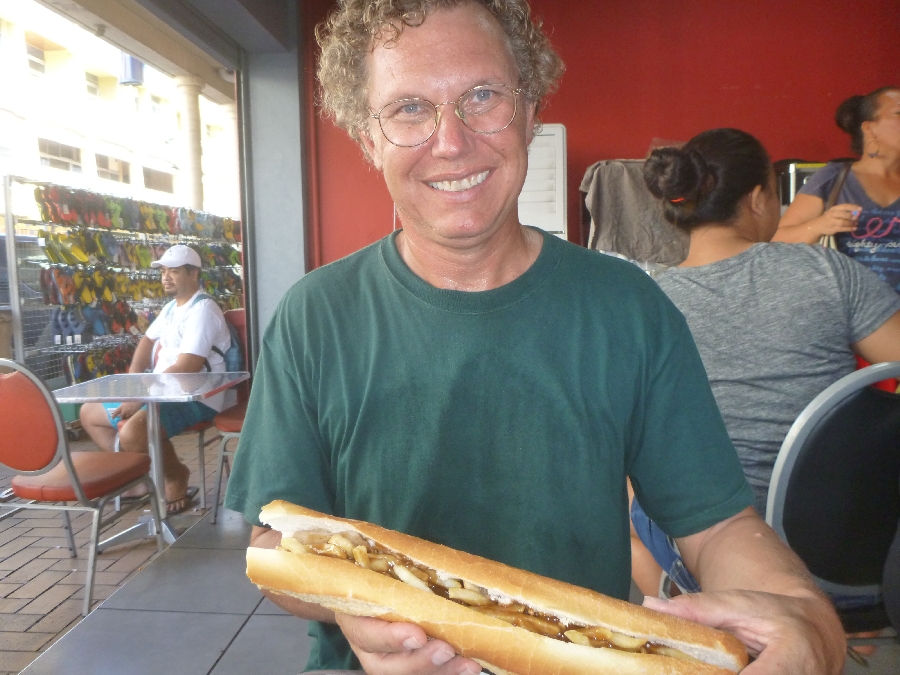 We were just as likely to be greeted with the Tahitian "Iaorana," as we were with a "Bonjour." We had a tasty dinner at Les Tres Brasseurs, a nearby microbrewery, another at a local park where a collection of food trucks gathered each evening, and some nice lunches at small outdoor cafes. We were surprised, though, at how many restaurants were closed at dinnertime, open only for lunch, which is the opposite schedule of most restaurants in Mexico.

We worked hard, and walked many kilometers while we were in Papeete, managing to cross off almost all the items on our extensive to-do list. Some of the items ticked off included taking our propane tank to a local Mobil station to be refilled; visiting the local outdoor market and the big Carrefour supermarket to replenish our food supplies; filling SCOOTS' diesel and water tanks; and dealing with the customs and immigration paperwork for French Polynesia and for the next two countries we're planning to visit. We weren't able to get to a sailmaker to see if our Code 0 can be salvaged; we hope to do that when we get to New Zealand, later this year. We also weren't able to get our alternator fixed, even though it spent an entire day in an alternator repair shop, Eric having told the repair guys what was wrong with the alternator when he left it. When Eric went to pick it up, they told him it was broken and they didn't have the parts to fix it. Hmm. 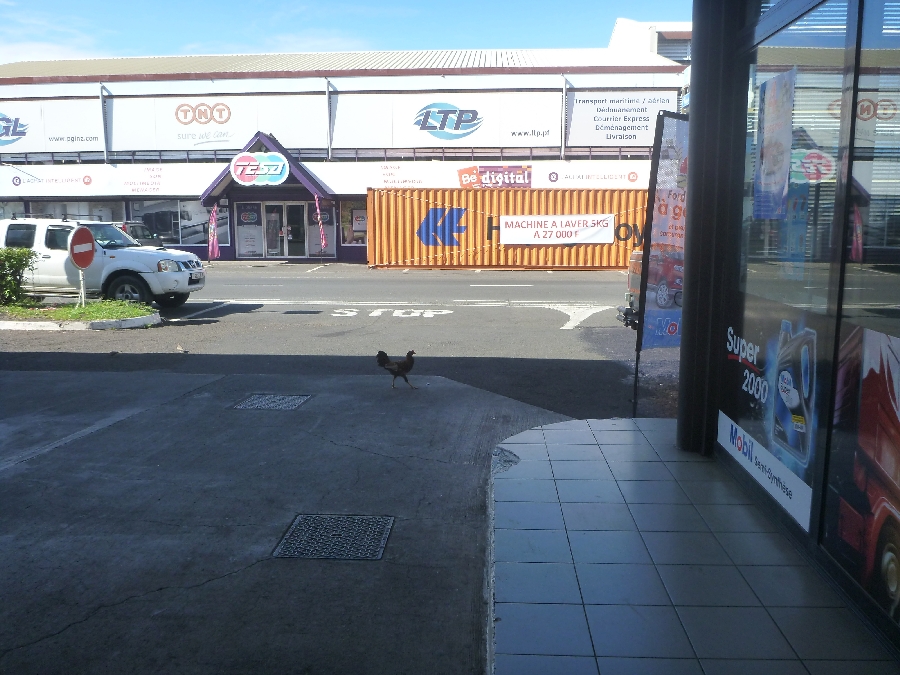 Also, after many trips to various electronic stores and chandleries, Eric found the Simnet to NMEA-2K cable he needed, which would allow our new radar and chartplotter to be fully functional.

We also had fun while in Papeete. Reuniting with our friends on s/v Batu, who were also at the marina, we attended a night of Tahiti's Heiva festival in the local outdoor arena, where singing and dance groups from many of the Polynesian islands converge to compete for top honors. Wow, what an amazing display of Polynesia culture! The extravagant headdresses, the skimpy dance costumes, the numerous costume changes, the demanding choreography, the frenetic gyrating hips of the female dancers, the aggressive movements of their male counterparts, all carried along by the continuous percussion backbeat! We were amazed that the women could keep their hips moving at that speed for almost an hour and how the hundred or so dancers could stay so well synchronized for that length of time, and that their costumes were able to stay on, given the stresses to which they were subjected. We weren't allowed to take photos inside the arena, but here's a link to a video of the winning groups from this year's competition. Your text to link... Start watching at 2:47 to get a flavor of what I'm talking about.

Halfway through the show, the skies opened up and rain began to POUR down. Remember, this is an *outdoor* arena. Sound technicians dashed out onto the dance floor to pull the microphones and speakers under the bleachers so they wouldn't get wet, and the night's festivities were cut short. Fortunately, the remaining groups were able to perform a few days later, and our tickets were honored, so we got to see the second half of the show.

Traveling the channel in the lagoon near Papeete is interesting, too, as sailboats are required to contact port control before passing in front of either end of the airport runway, which is situated at the edge of the lagoon. We called for permission four times during our travels and twice had to stop and wait for airplanes to land! 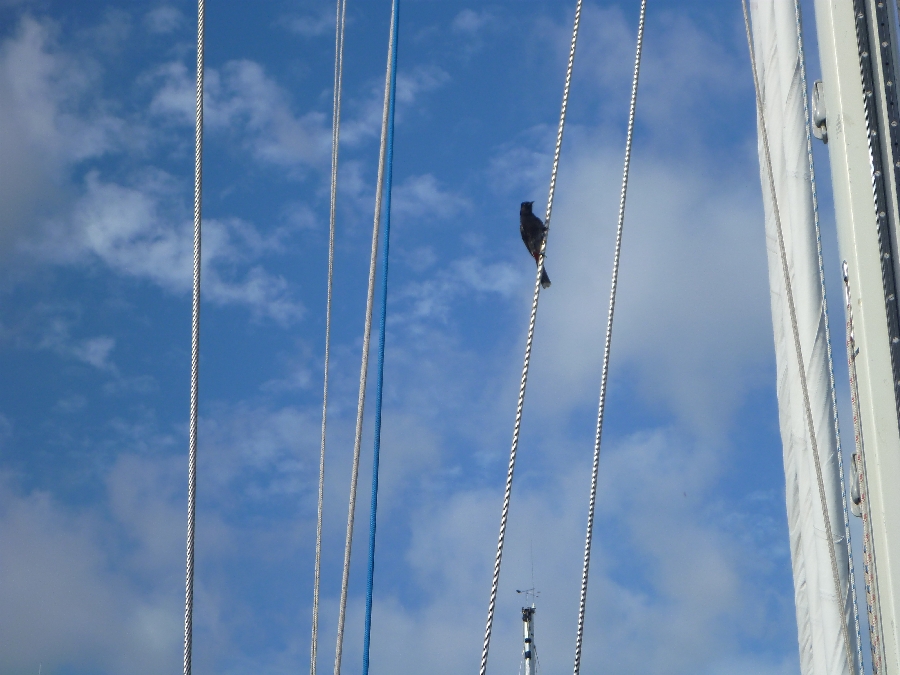 I haven't seen many landbirds lately, so I was happy when this red-vented bulbul landed on our rigging.

Fun Fact: we didn't find Tahitian Treat soda in any of the stores.