A quiet bay, vanilla, the Hibiscus Hotel, and some Fun Facts Another island we visited is Tahaa, a place I'll bet you've never heard of. Here it is on a map: 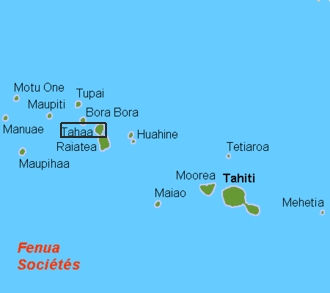 The wind was ripping and SCOOTS was rolling on 6-foot waves when we approached Teavapiti Pass, the route we were going to take into the lagoon. Though our cruising guides promised that this was an "all weather pass," I was skeptical. Both the wind and the waves were pounding the reef, and I couldn't imagine that with those conditions, the pass wouldn't be roiled up. But when we got closer, I became a believer: as the breakers crashed against the extensive barrier reef on either side of the pass, they expended all their energy, and the water in the wide pass was nearly calm. We slipped between the outer channel markers, leaving the rolling seas behind us, and emerged into the placid lagoon.

We enjoyed our visit at Tahaa, anchoring in one little bay, and tying to mooring balls in two others. The channels are well-marked, which is a good thing, because when you're moving around in a coral lagoon, there's not much distance between No Problem and Big Problem, when it comes to water depth. Fortunately, you can usually tell the difference by the color of the water (light green and light brown are bad).... 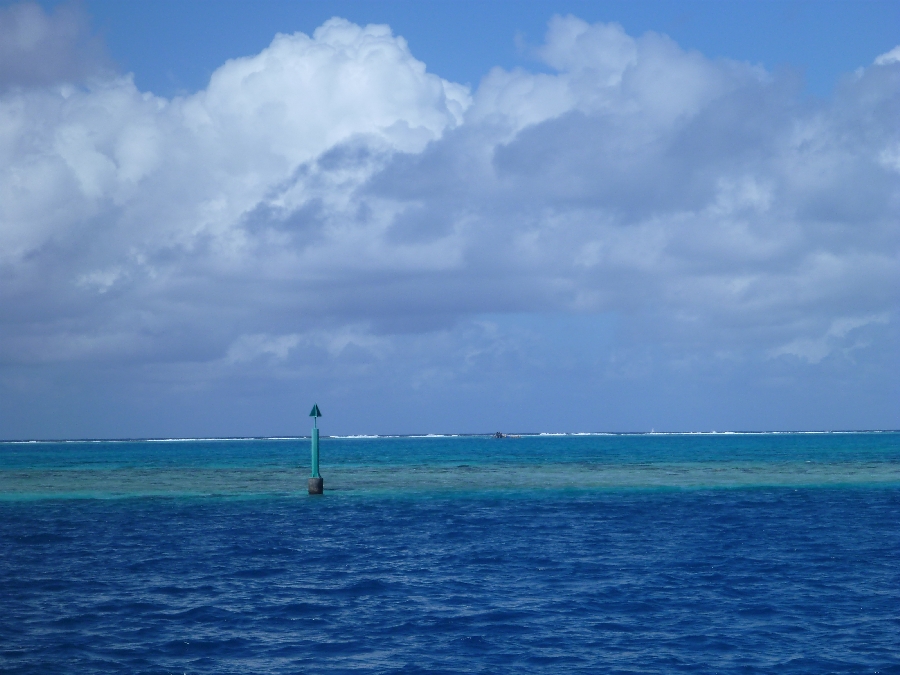 You don't want to be on the wrong side of this green marker.

We spent a few days anchored on the western side of the island in the snug little bay of Patii, in 80 feet of water, bounded by coral reefs on three sides. Our cruising guide suggested anchoring in 60 feet, but that brought us uncomfortably close to the coral reefs, so we stayed a little further out. It was a quiet place, not on the list of recommended anchorages for the charter boats, so SCOOTS had the bay to herself for the three days we were there. 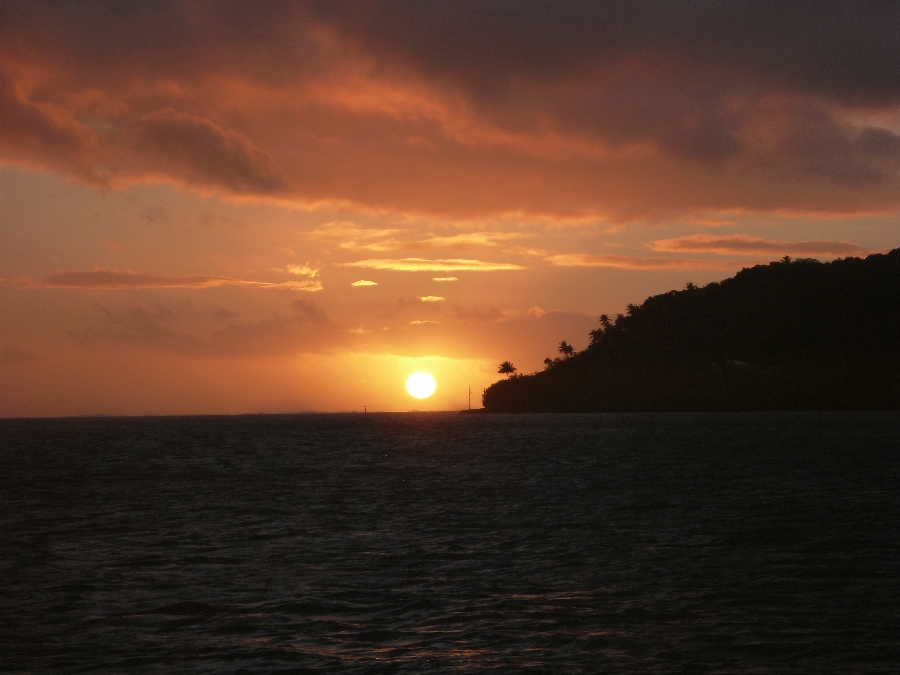 A collection of modest homes lined the white sand shore, roosters crowed each morning, dogs barked from time to time, children laughed, and Polynesian music wafted over the bay from one of the houses. One family spent an entire day chopping coconuts and preparing them for copra production. They lit the stack of discarded coconut husks, which gave off a smoky cloud for the remaining two days that we were anchored there. 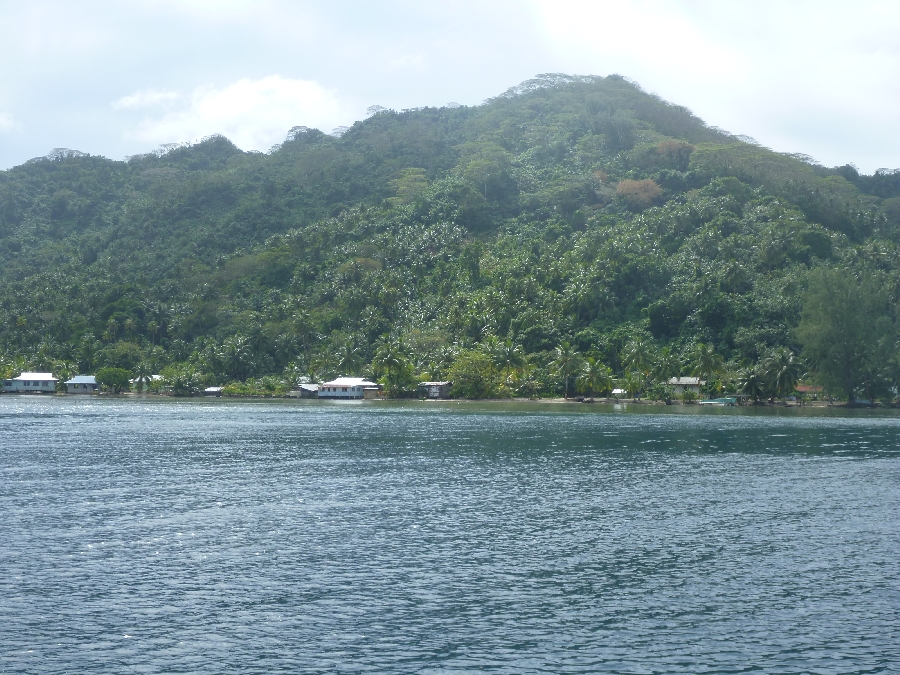 We also stayed on a free mooring near the Hibiscus Hotel for a couple of nights, where we dinghied in to enjoy dinner one night and to rent a car another day. 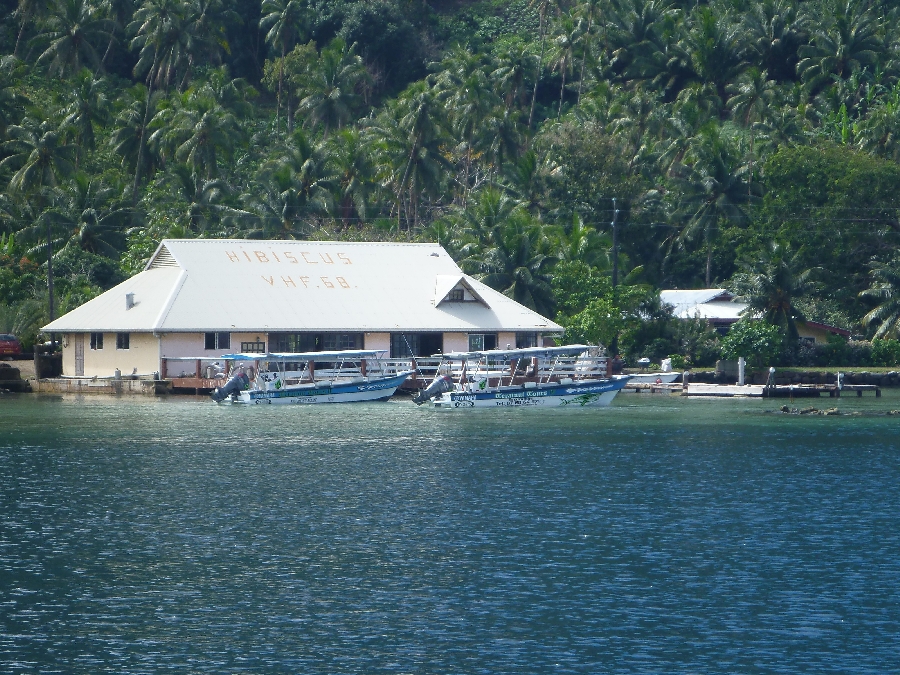 Unlike all the hoops that US car rental agencies make prospective renters jump through, this rental was refreshingly simple: we just took the car (no identification, drivers license, proof of insurance or attempt to sell extra insurance required), and paid them in cash when we got back. We drove all around the island, as the road mostly following the coast. 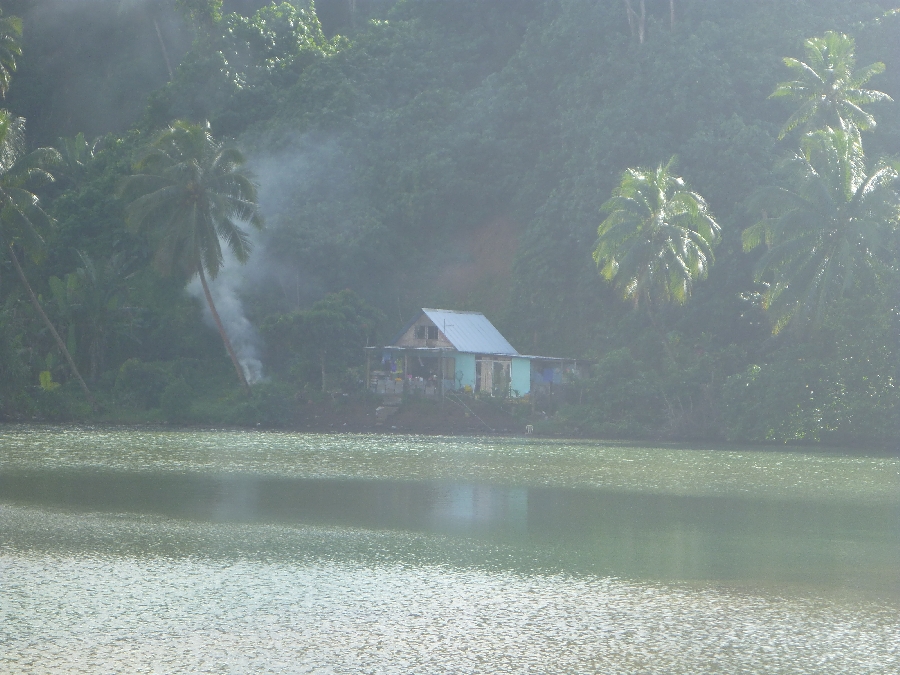 We started to drive on the one dirt road that went across the island through the jungle, but turned back when it became clear that it would be too much for our little rental car. It was fun to explore on land for a change.

We passed by a few churches that all had this anchor motif. We're not sure why... 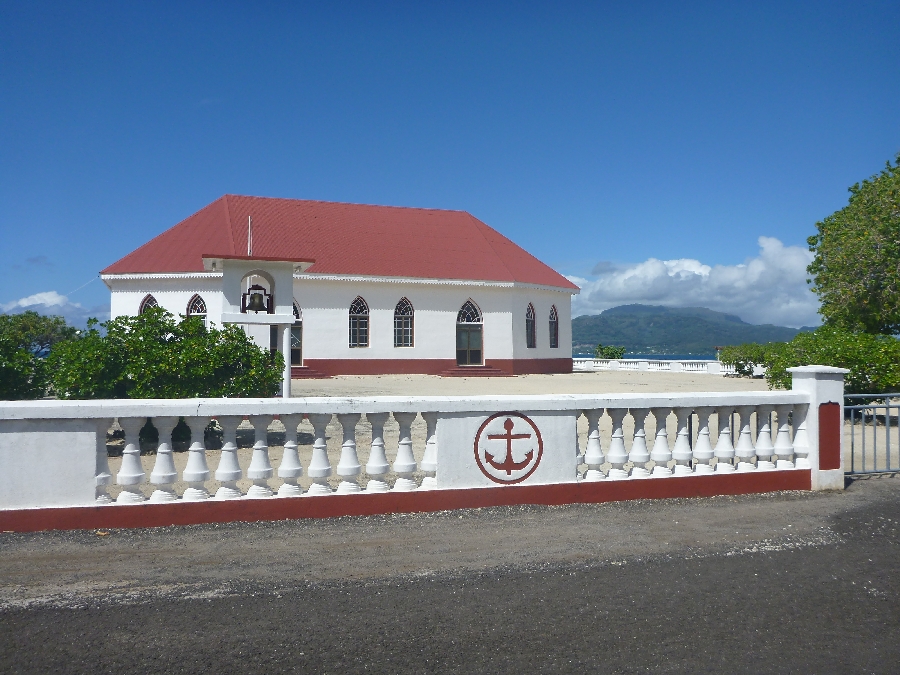 When we drove to Patii Bay, to get a closer look at the modest homes we'd seen from SCOOTS, and to see what the bay looked like from the land, the pile of coconut husks was still smoldering. 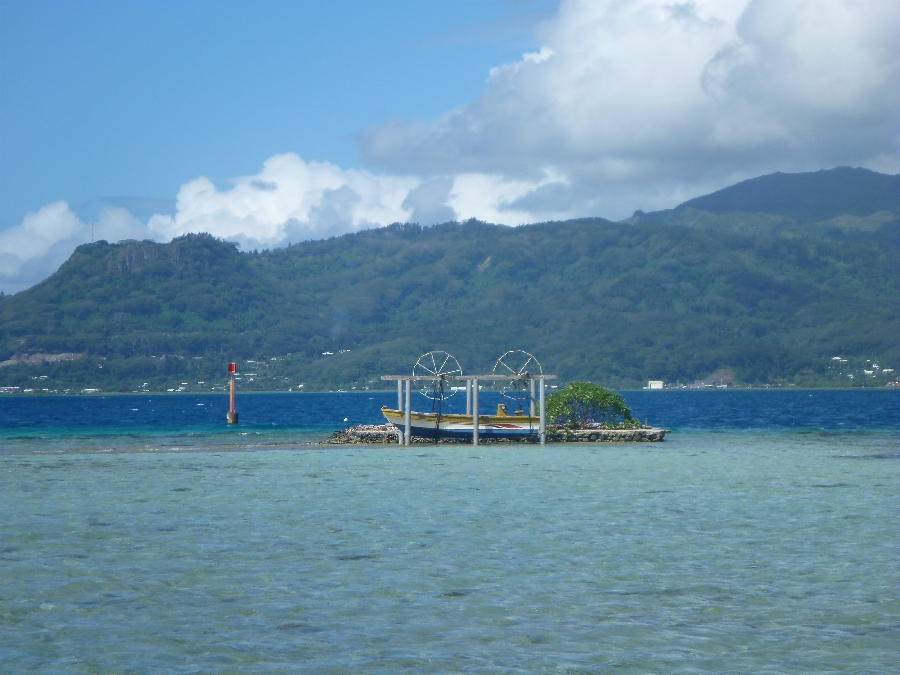 We had a picnic lunch at a shady spot on the north shore and stopped at a small magasin (grocery store) to pick up some baguettes. 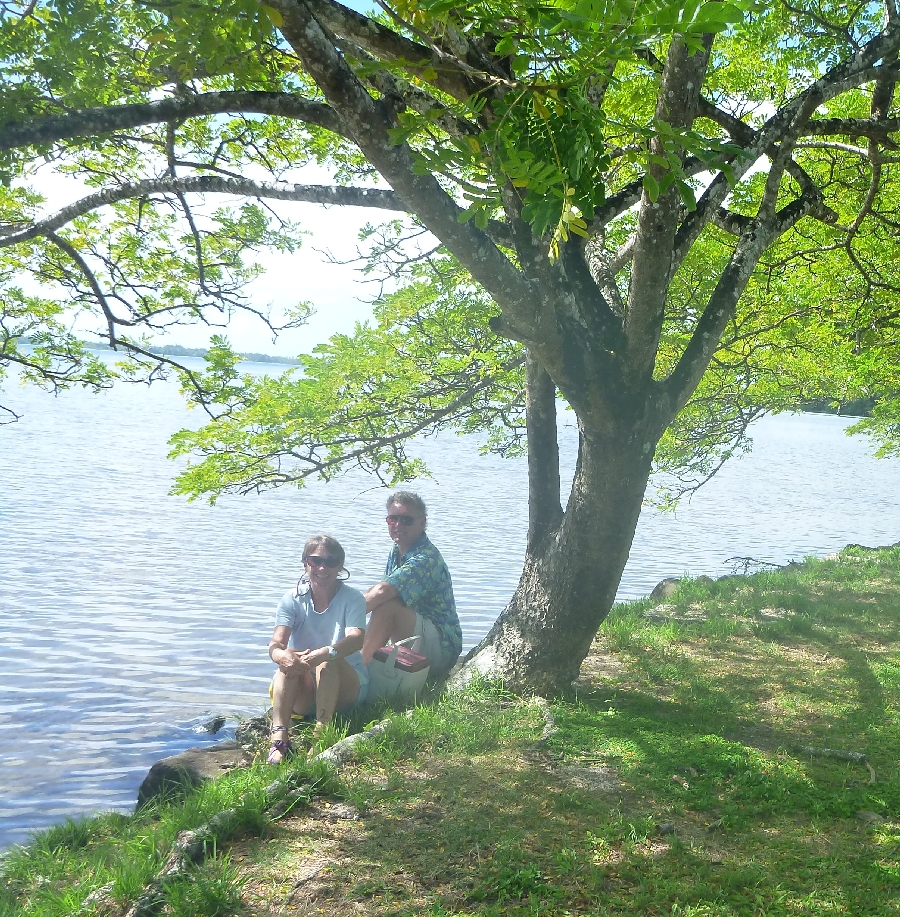 Tahaa is called The Vanilla Island, so we included a stop at a vanilla farm on our travels. At Le Maison de Vanille, we had a brief tour given by Gustav, the Tahitian owner of the small operation, and his friendly dog. 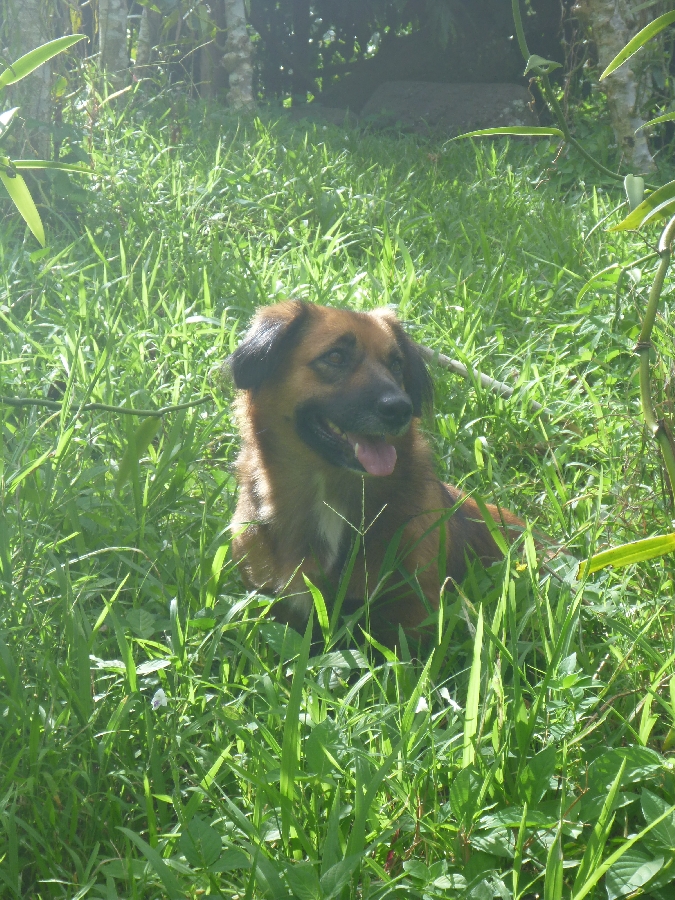 We gleaned as much information as we could about growing and processing vanilla, through French, hand gestures, and bits of almost-English. It was all very interesting, and we actually learned a lot. 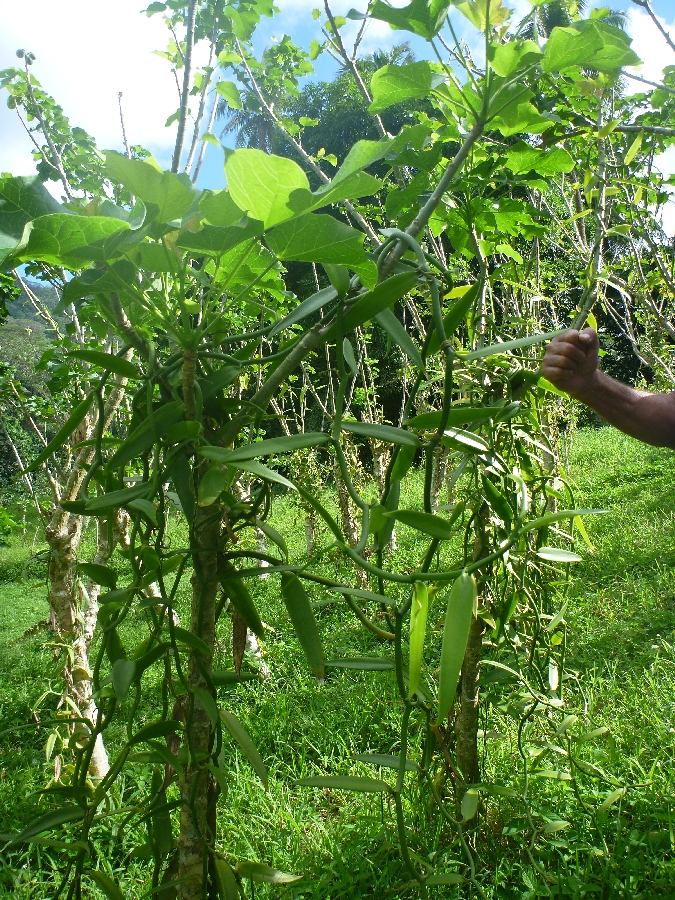 A vanilla vine growing on its support tree 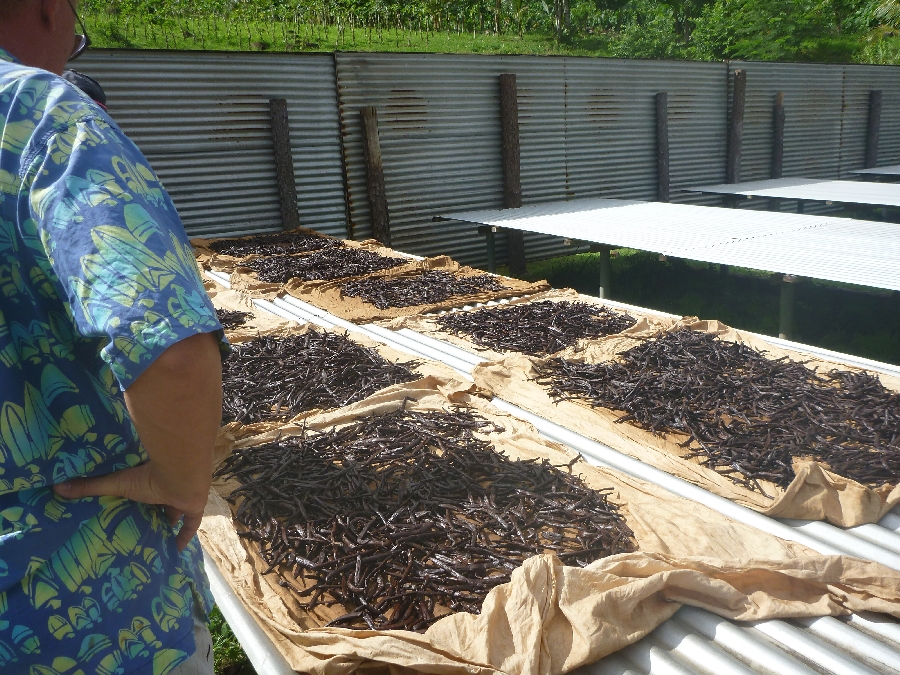 The pods being dried

Here are two Fun Facts we picked up from the tour:
Fun Fact #1: it takes 9 months for vanilla pods to mature on the vine before they're ready to be harvested.

Fun Fact #2: after processing, the length of each bean is measured before being packed for shipping. Longer, higher quality beans are sent to Europe, where tastes in vanilla are more discerning; shorter beans are sent to the US. 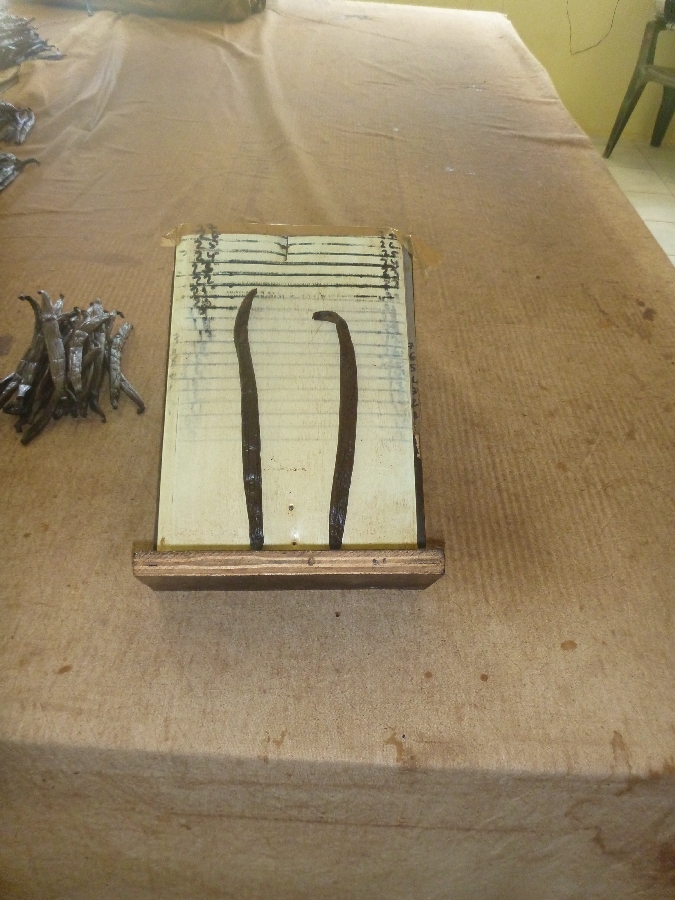 Measuring the pods. The shorter US ones are in the pile on the left.