A Polynesian white-out, a wayward mooring, a bit of a disappointment, some lovely anchorages, colorful clams, and a whole bunch of pictures We also visited Bora Bora, whose lovely lagoon lives up to - or possibly even surpasses - its reputation. We entered the pass after a fun three-hour sail from Tahaa, just in time for a Polynesian white-out. (That's what I call those squalls where it rains so hard that you can't see anything.) We were right in the middle of the pass, navigating through the channel markers, when it hit. Fortunately, we were able to safely complete our transit using radar to visualize boats and other things we might hit, our chartplotter to visualize where we were in relation to things on the chart, and my eyeballs to look at the real world (though I might've been able to see more, had I worn a mask and snorkel). Five minutes later, the rain was behind us, the sky was blue above us, and the moorings of the Bora Bora Yacht Club appeared ahead of us. That's the tropics! 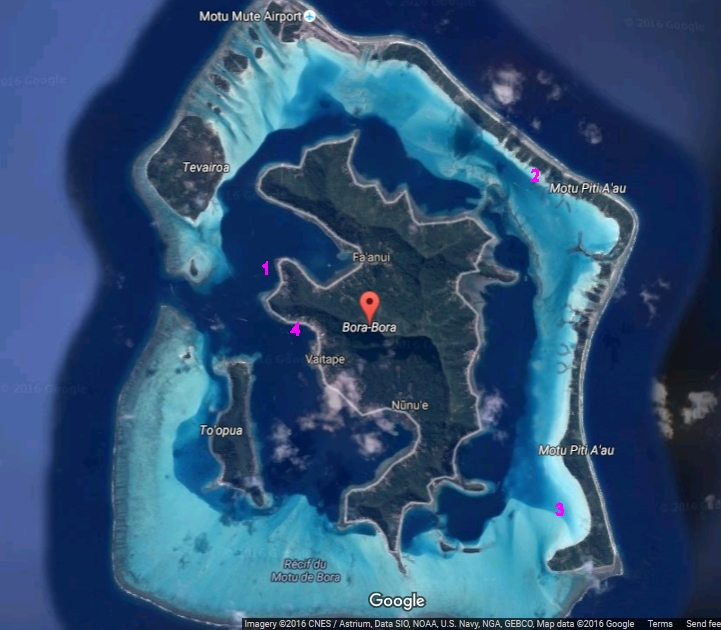 Here is a picture of Bora Bora, showing the 4 places we stayed during our visit.

We took a mooring ($20 US per day, including showers and wifi), and went ashore. We'd read about the BBYC in many of the books written by cruisers, way back when we were still living on land and hatching this crazy cruising idea of our own, and I was excited to see the place. Sadly, unlike Bora Bora's lagoon, its yacht club didn't live up to my expectations: instead of being the funky, cruiser-friendly hangout that I'd imagined, it was actually a pricey restaurant (they don't even have a happy hour) with $80 t-shirts for sale, that catered to the island's more well-heeled visitors. Oh well. 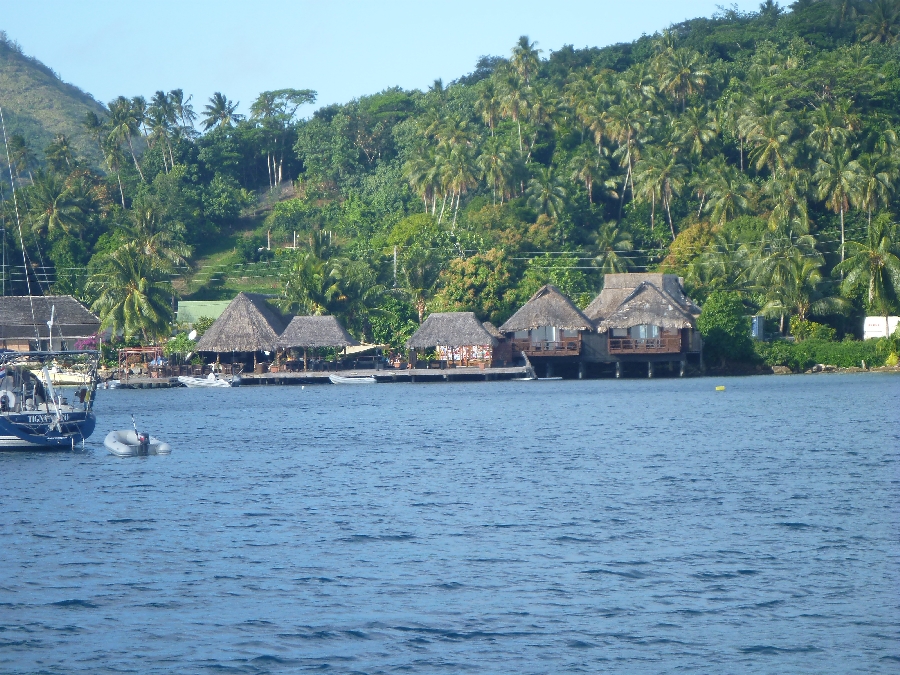 Also, cruisers beware if you take a mooring here: at least one of the moorings wasn't attached to anything on the ground! One afternoon, Eric and I noticed that the charter catamaran on the mooring next to us had drifted away, still attached to the mooring line and float. We hopped in our dinghy and buzzed out to the boat, where the occupants - a mom and two kids (the dad and one kid having taken their dinghy to shore earlier) - emerged from the cabin, unaware that they were no longer in the yacht club anchorage. When the mom pulled on the mooring line, she eventually pulled in about one hundred feet of rope with just a metal shackle on the end! Though they spoke only French, we were able to convey that we would help them tie up to another mooring. The teenage son did a great job of driving the boat back into the crowded mooring field, and lining up with the new mooring so we could hand them the line and they could tie up. That's why we always use our anchor alarm, even when we're tied up to a mooring.

We enjoyed a fabulous waterside dinner at the yacht club one night, with our friends Jeff and Tatiana from s/v Maja, whom we had last seen at Nuku Hiva's airport anchorage. The next day, we took our boats around to the east side of the island, where we spent time in some absolutely stunning anchorages. The lagoon on this side has extensive coral reefs and some very shallow water, but as long as your boat doesn't draw more than 9.8 feet (that's the shallowest spot we saw), and you stay within the marked channel, following it through some tight zigzags at times, you can end up in some fantastic anchoring spots by the outer motus. 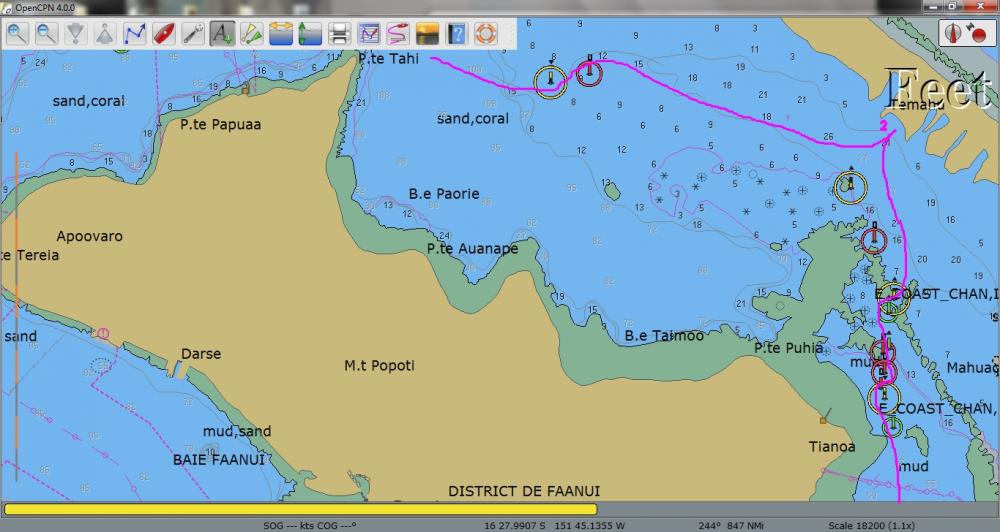 Here is a sketch of SCOOTS' path along the eastern side of the lagoon. Note the zigzags required.

Two of the fancy hotels on this side of the island - the Four Seasons resort and the Sofitel Private Island resort - provide their guests with free wifi, which SCOOTS' wifi booster antenna picked up while anchored nearby. It was pretty slick, to be able to use the Internet while anchored in those remote spots! 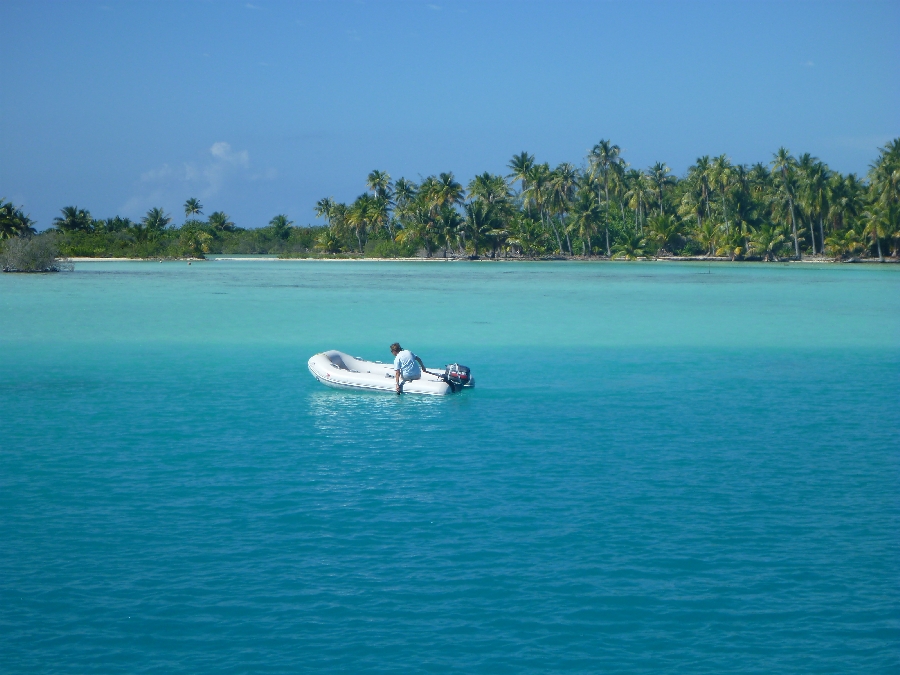 During our stay on the east side, we dinghied to the main island and hiked to the top of a ridge, from which we could see both sides of the island. 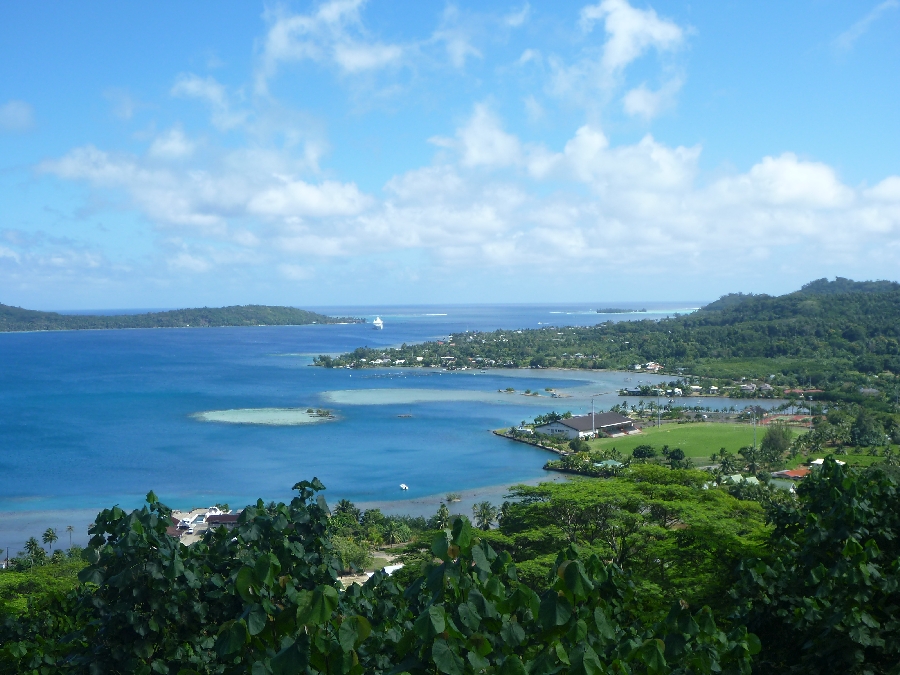 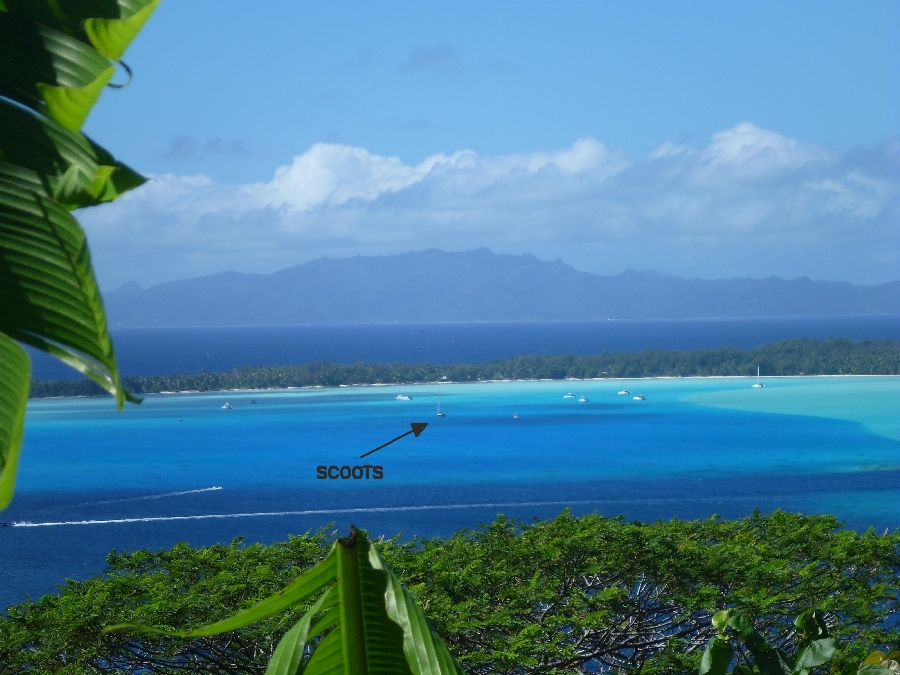 The views from the top.

Another day, we went snorkeling in a beautiful coral garden called The Aquarium, where tour boat operators regularly feed the reef fish. As a result, the fish are plentiful and quite friendly. 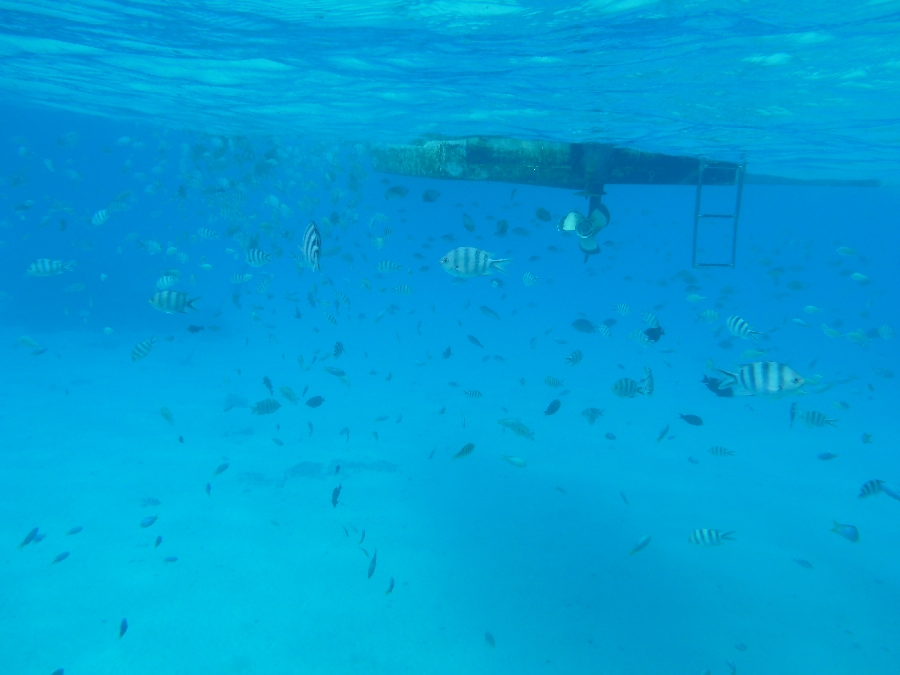 Feeding the fish in the Aquarium

I'm charmed by the colorful giant (Tridacna) clams that live here. Though I wouldn't classify the ones I've seen as "giant," at 8 inches long, they were still pretty big. What I like about them is the dazzling array of colors they come in. Embedded in the sand or coral, with their shells open and their mantles exposed, they add large swatches of bright colors - blue, green, turquoise, indigo, purple, and occasionally tan or black and white - to the scene.

I've included some photos that I took, but to really see the colors I'm trying to describe, you should Google some images of Tridacna clams. 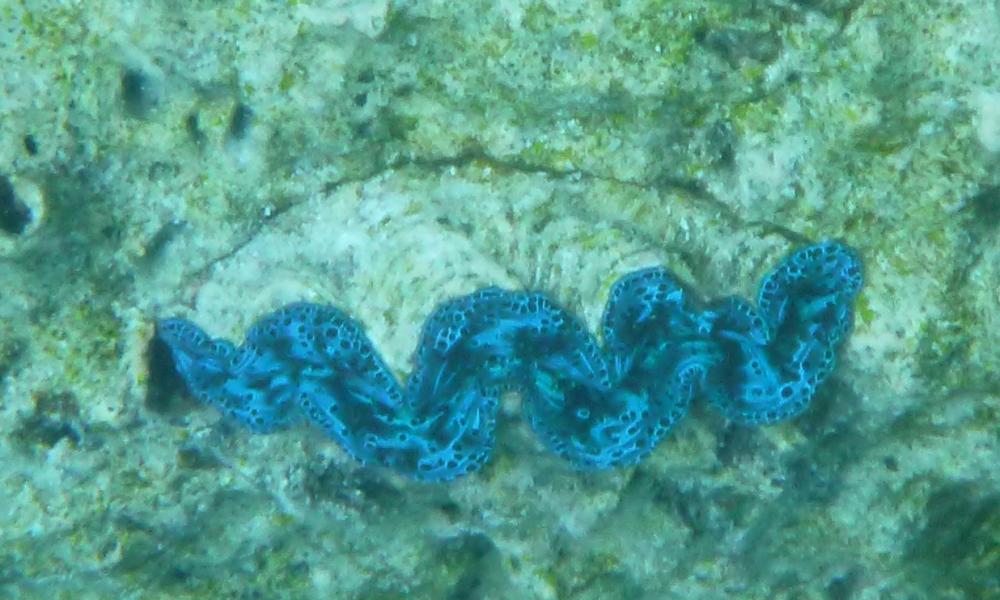 Through the luxury of wifi, I was able to research this question a bit. The answer, it seems, turns out to be quite complicated....

...The clam also produces small reflective cells called iridophores, which act as a sunscreen, and contribute to the mantle's iridescence.

...Genetics have been suggested, but not conclusively proven, to play a role in the colors and patterns of clams. Experiments investigating the effects of lighting intensity, seeding with particular zooxanthellae populations, and added nutrients on color production in the clams also proved inconclusive.

While I never succeeded in finding a definitive answer to my original question, I certainly learned a lot of interesting facts about clams. If you want more information, you can read the article here: Your text to link...

Here's a Fun Fact about clams that I discovered along the way:

Fun Fact: Giant clams are providing clues to help researchers improve color displays and solar cells. It's recently been discovered that Tridacna clams create white colors in their mantles in the same way that a color TV produces a white color, by combining red, green, and blue light. While electronics must produce the colored light using LEDs and other sources of light, the clams produce the colored light using highly-reflective iridophore cells, and ambient lighting. Researchers are planning to construct solar cells with structures similar to those used by the clams, in the hopes of making them more efficient.

Here's a link to the report that gives all the details....Your text to link...

Life wasn't all sunsets and umbrella drinks while we were anchored in those lovely places. We took advantage of the warm water to scrub off the grass skirt that SCOOTS had been sporting since Papeete, 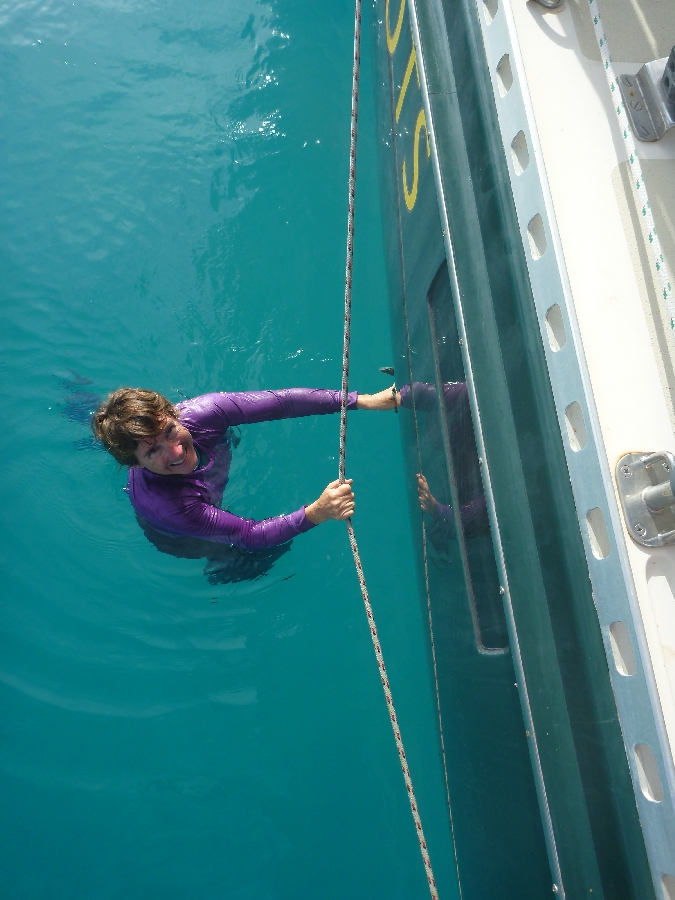 and Eric did a whole slew of jobs, including rebuilding one of our alternators. 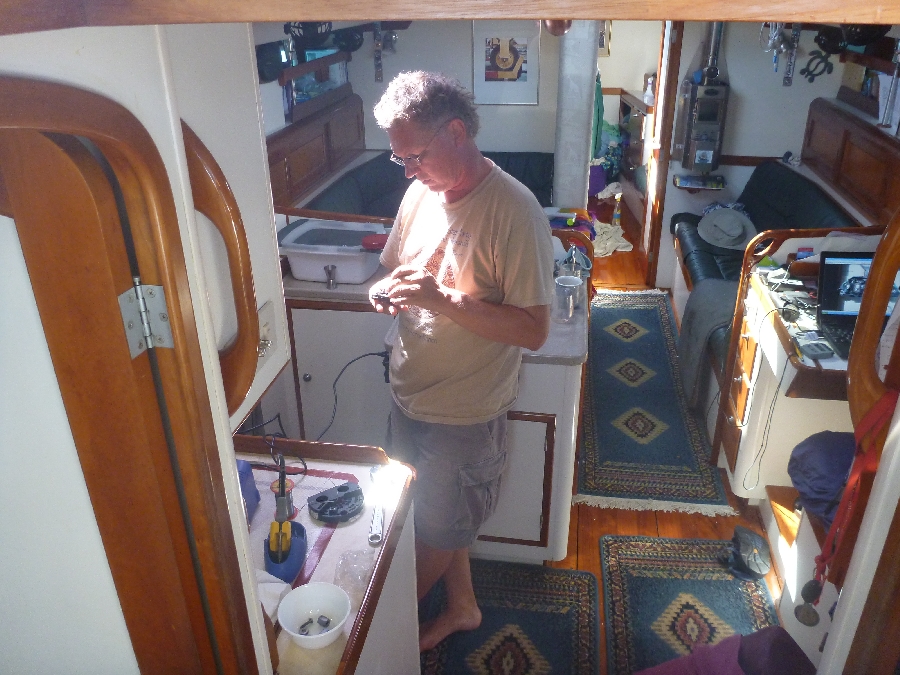 Because Bora Bora is such a lovely place, I've included a bunch of photos without a bunch of words. Enjoy! A bird at sunset A bit of a gap at the Maikai