We were excited to arrive at Suwarrow, as it was someplace we'd always hoped to visit, ever since learning of its existence back when we were still "couch cruising" in Belmont. From all accounts and photos, it seemed like the quintessential tropical island getaway. And it really is! 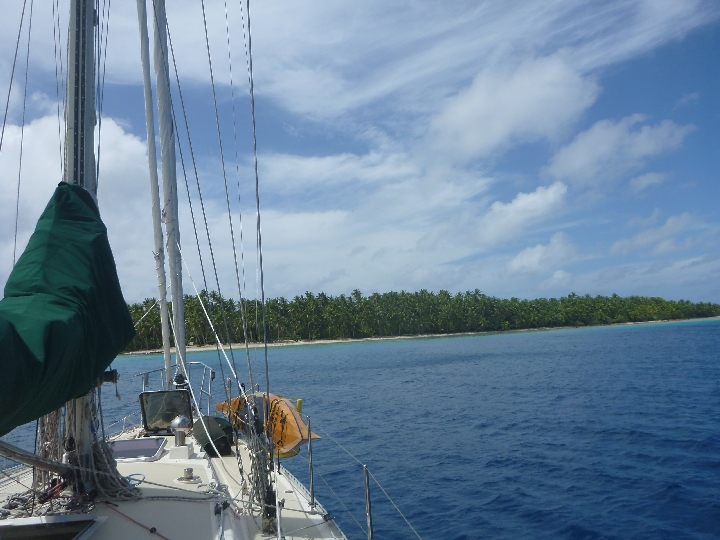 Between 1952-1977, New Zealander Tom Neale lived alone on Suwarrow, building a homestead for himself on Anchorage Island, and living off the land and whatever stores he'd brought with him. You can read more about his life and adventures on Wikipedia or in his autobiography, An Island to Oneself. These days, two Cook Islands park rangers, who live in Tom's former homestead between June and November, are the only human inhabitants of the island.

Soon after we anchored, we received a call on the VHF from the park ranger, welcoming us to Suwarrow and requesting permission to come aboard in an hour or so to check us into the Cook Islands. When Rangers Harry and Pai arrived in their small aluminum skiff, we sat in the cockpit and completed the required immigration and customs paperwork, which included declaring all our meat, produce, eggs, seeds and plants, firearms, tobacco products, and alcoholic beverages, and having our shoes checked for dirt from distant lands. The rangers didn't confiscate anything, but they provided us with a list of prohibited items and asked us not to bring any of them to shore.

The biocontrol portion of the process consisted of Harry spraying a mild insecticide inside our cabin, which would, presumably, kill any bugs that might be waiting to jump ship, take up residence on Suwarrow and wreak havoc with its ecosystem.

Because Suwarrow is a national park, there are a few rules we had to follow while we were there. These include (but aren't limited to) a prohibition on spearfishing, regular fishing, or throwing food into the lagoon, to reduce the probability of attracting large, dangerous sharks; visiting any of the other motus (small coral islands) except for Anchorage Island, because of an ongoing rat poisoning program; hunting or eating coconut crabs; or taking any shells, animals or other natural objects from the island. 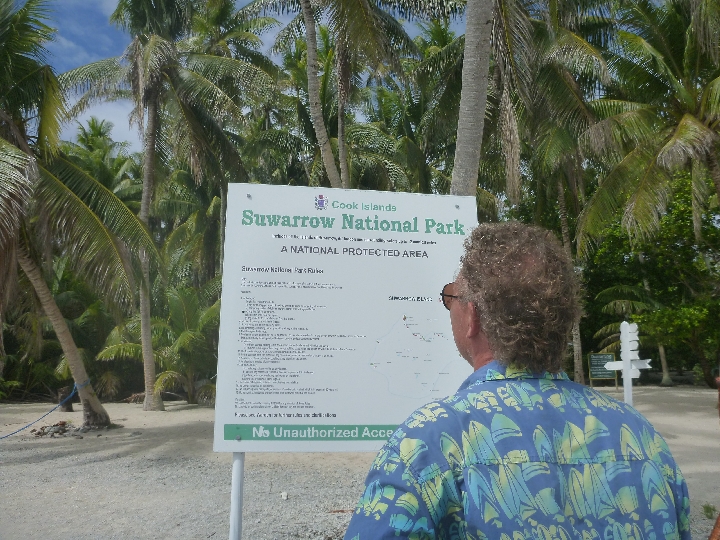 We also had to pay $50 US for customs. Why US dollars, when Suwarrow is a New Zealand territory? Harry said that most of the cruisers who arrive at Suwarrow are Americans, and it makes it easy for them to pay the customs fee. We, on the other hand, had NZ dollars (and some spare pesos and French Polynesian francs) and had to go digging around to find fifty US dollars. 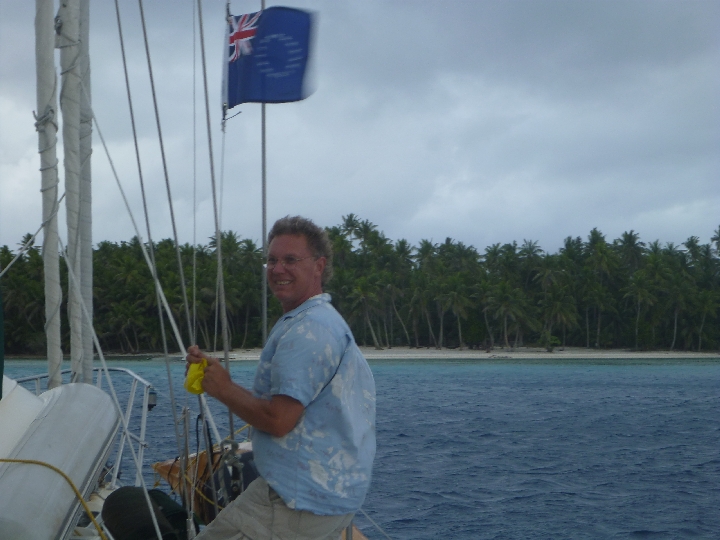 The water is so clear here that we could easily see our anchor buried in the sand, 60 feet down. Two- and three-foot-long black tip reef sharks, which tend not to bother humans, adopted SCOOTS as soon as she arrived, swimming slow circles around her, or around us whenever we were in the water. One of the sharks that adopted SCOOTS.

The snorkeling at Suwarrow is fabulous! We went three times while we were there, each time enjoying warm, crystal-clear water and many varieties of extravagantly-colored reef fish, bread-loaf-sized sea cucumbers and giant clams. Sharks – some about my size – regularly checked us out, but they must've decided that we were too big to eat, or not worth the trouble, as they always left us alone. 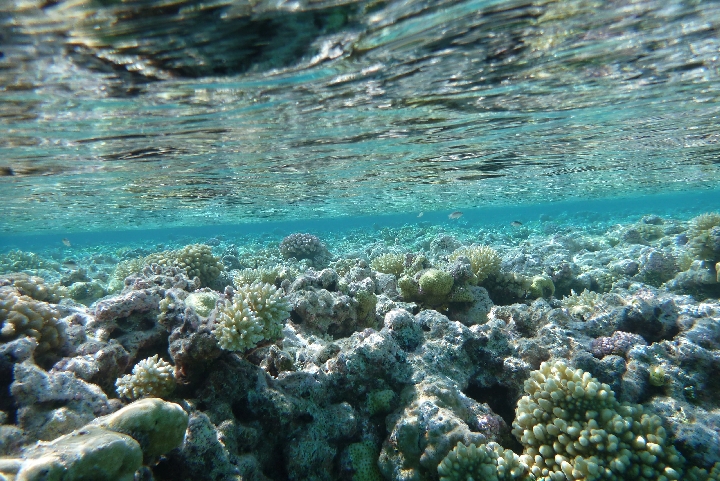 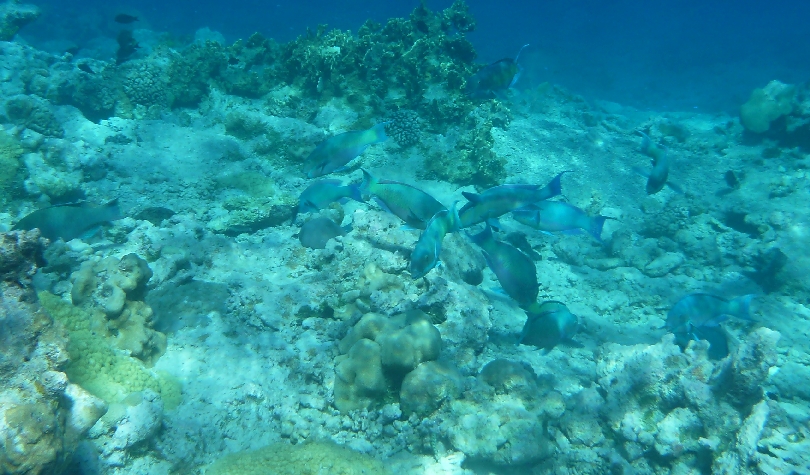 Is a group of parrotfish a flock or a school? 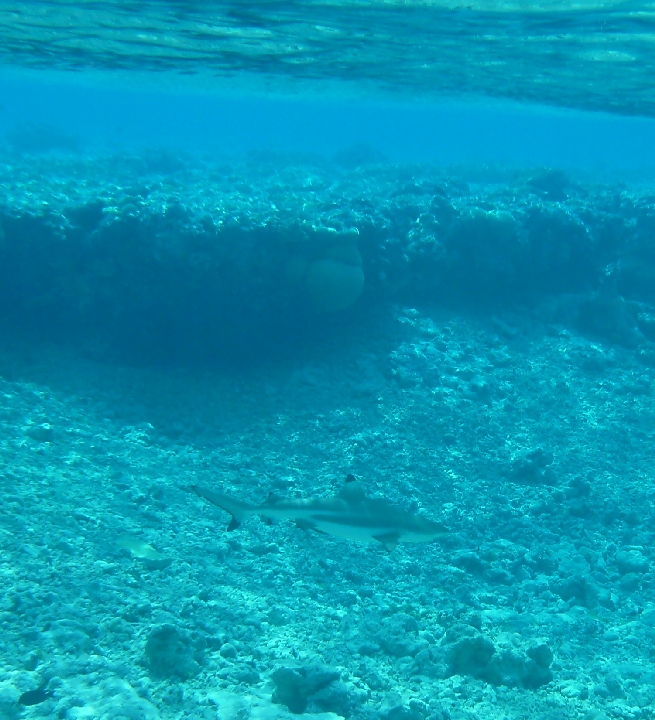 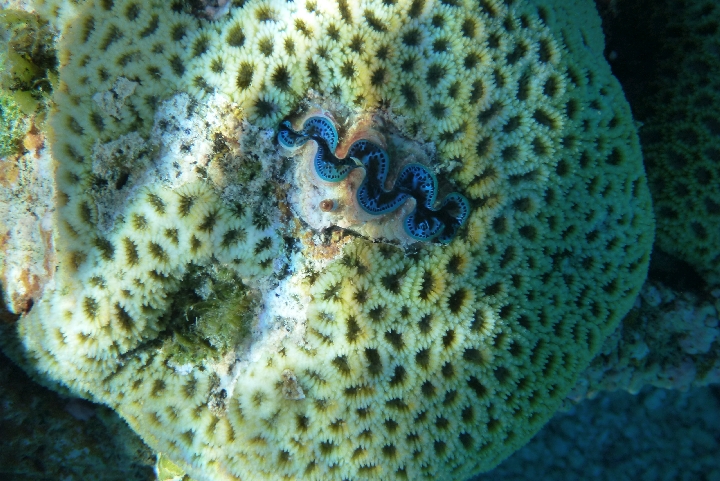 About a quarter of a mile away from the anchorage, Harry and Pai had installed a couple of orange buoys, marking the location of a manta cleaning station, where huge mantas would congregate each morning to be cleaned by smaller fish. Sadly, we never made it out there to swim with the mantas, before we had to leave. Other cruisers did, though, and they said it was spectacular.

We explored Anchorage Island as well, strolling along the beach where hammocks swung between coconut palms, hermit crabs scuttled, and Suwarrow's iconic sign reminded cruisers how far from home they were...

It's pretty far to anywhere 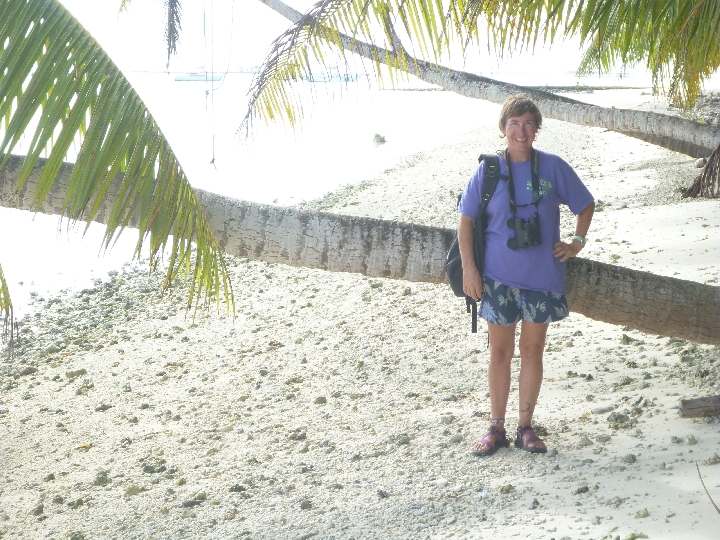 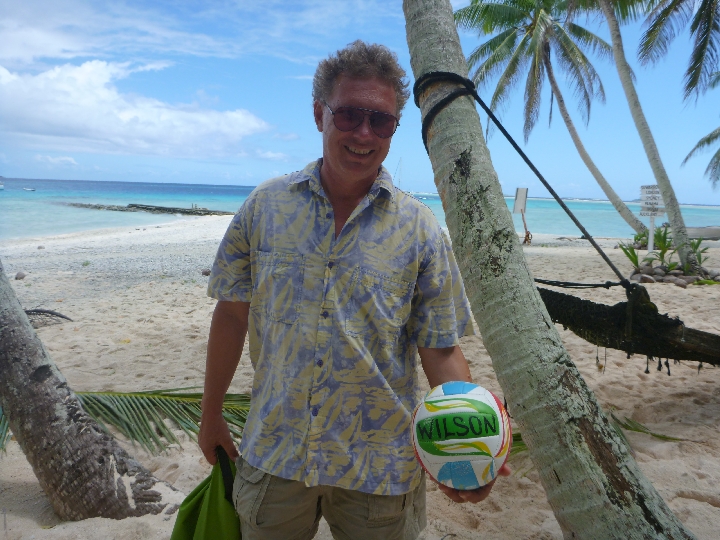 ...wandering across the island to the outer reef along a palm-shaded, hermit-crab strewn path... The path to the outer reef One of the many land-based crustacean residents

...and walking along the rocky outer reef... 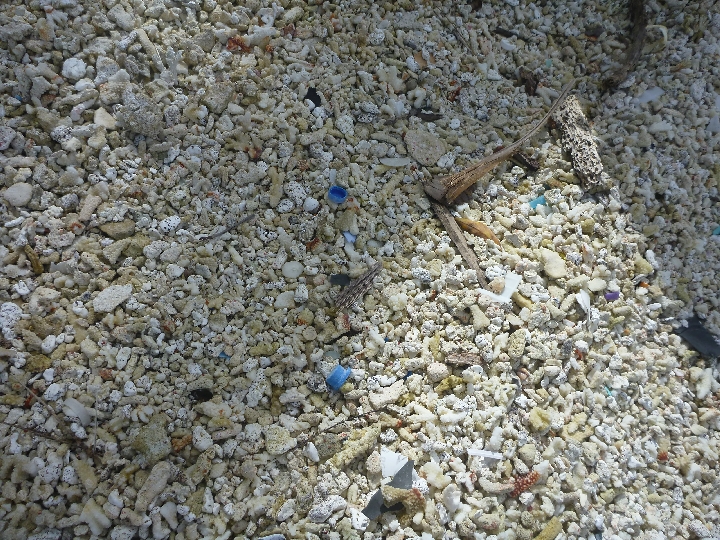 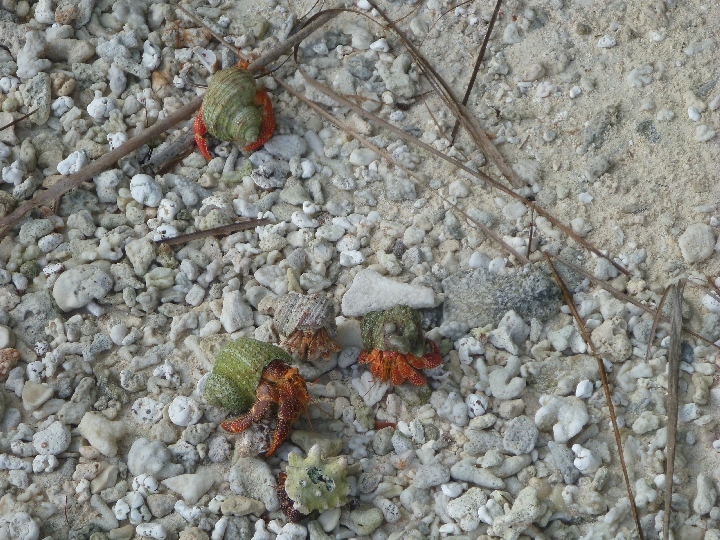 
Another day, I saw about two dozen black tip reef sharks swimming in a constant procession past a low coral shelf. They went around and around, like kids going on a ride again and again, and I wondered what they were up to. Some of the sharks swimming past the ledge.


Then, a big white tip shark joined the group. When it got to the ledge, it swam underneath and thrashed around for a few seconds, roiling up the water and attracting all the black tip sharks. As soon as the white tip shark swam away, a large magenta parrotfish came out from under the ledge and swam for all it was worth in the opposite direction from the sharks. It evaded them by leaping out of the water, landing high and dry on the coral shore, gasping for breath, while two dozen sharks thrashed and gnashed their teeth at the water's edge, trying to get at the parrotfish. It was definitely an "out of the frying pan, into the fire" situation for the parrotfish, reminding me of Gary Larson's "Far Side" cartoon about the goldfish standing next to their fishbowl in which their house was on fire. Maybe you've seen it...

Anyway, I was on my way over, planning to nudge the parrotfish into a nearby shark-free tidepool, when it must've decided that a quick death by sharks was better than a slow death by asphyxiation. It suddenly flopped its body back over the edge of the coral, into the water. The water exploded into a frenzy of spray and foam and sharks. I never saw the parrotfish again, once it hit the water. In less than fifteen seconds, the sharks dispersed, leaving no sign of the parrotfish that had been. Wow. Coconut crabs also inhabit the island. I think these prehistoric-looking critters more resemble land-lobsters than land-crabs. According to Wikipedia, coconut crabs are are the largest terrestrial arthropods, growing up to a meter across, leg to leg, and can weigh up to 9 pounds. They eat pretty much everything – including coconuts – though that isn't their main food. They climb coconut palms, as well as other trees, to escape predators. People do eat them, which is probably why they've been extirpated from areas with large human populations. The biggest coconut crab I saw on Suwarrow was about the size and shape of a large bowling ball. Eight other boats were anchored in this remote atoll along with SCOOTS, and we had a good time meeting the other cruisers – which included a family of six from New Zealand, two solo Italians, another Italian boat with a young family including a three-year-old, a French couple, a Bulgarian couple, a German couple, and a French solo sailor – and spending time with them on the beach and on their boats. Cruisers tend to seek and find camaraderie with each other no matter where we are and with whom we find ourselves sharing an anchorage. We're all "those crazy people who live on boats," so from the beginning, we already have something in common.

Next time: a stormy day at Suwarrow.

You can check out more photos in our Gallery, in the Suwarrow folder...