Tropical weather is notoriously skittish. Today's lovely sunny day could suddenly turn sullen and squally. Like most cruisers, we keep a watchful eye on weather forecasts - and on the weather around us - so we knew that Suwarrow would soon be visited by some stormy weather. 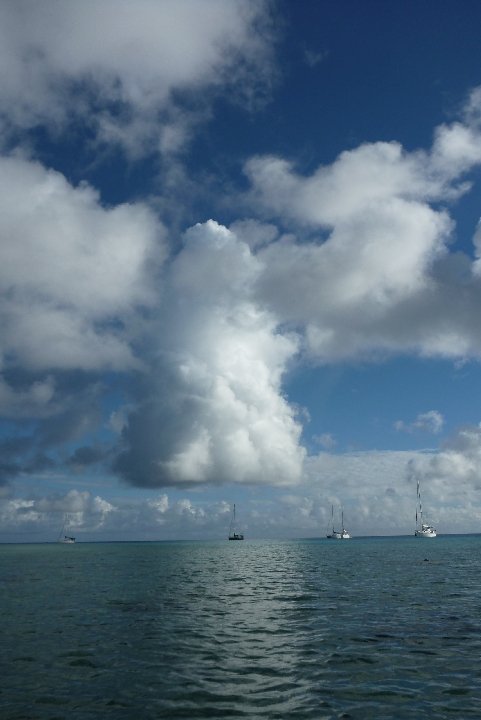 SCOOTS and her cloud

The prelude to the storm was a day of "backing" winds. The term "backing" means that the wind direction follows the compass around in a counter-clockwise direction. In our case, the wind began to shift from its usual easterly direction, toward the northeast. Awhile later, it was blowing from the north. Over the next few hours, it proceeded to blow from the northwest, west, southwest, south, and finally settled on the southeast.

This backing process has the effect of slowly turning all the boats in the anchorage in a circle around their anchors. In an anchorage randomly strewn with coral heads (bommies), as the one at Suwarrow is, turning in circles can result in anchor chains being wound around bommies. This is bad for a couple of reasons: (1) it can keep a crew from pulling up anchor quickly, should it become necessary; and (2) shortening the length (scope) of chain between the boat and the anchor could potentially increase the shock load on the boat, which could damage the boat if the wind or waves kick up.

As we were expecting the wind and waves to kick up later in the day, and since SCOOTS' track on our chartplotter suggested that our chain had, in fact, shortened since the day before, we decided to use the calm morning conditions to snorkel the anchor and chain, and see whether we had a wrap. We did. 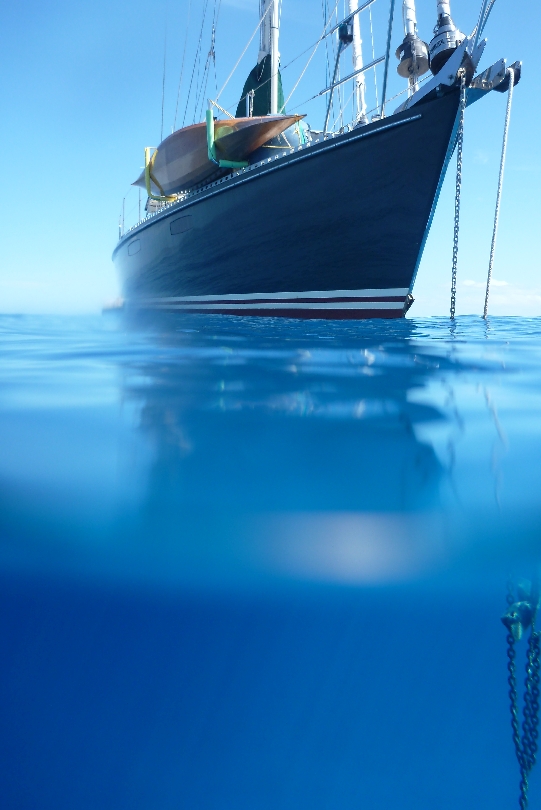 Because we'd buoyed our anchor chain with two floats, to keep it suspended above the bottom, and (theoretically) minimize wrapping on bommies, the wrap was minor and was located near the top of the coral head, which would make it pretty easy to undo. While I snorkeled over the anchor, directing, Eric drove the boat and we soon had the chain unwrapped. Now we knew that when the storm arrived, with its predicted southeast winds, our chain would be free of wraps. 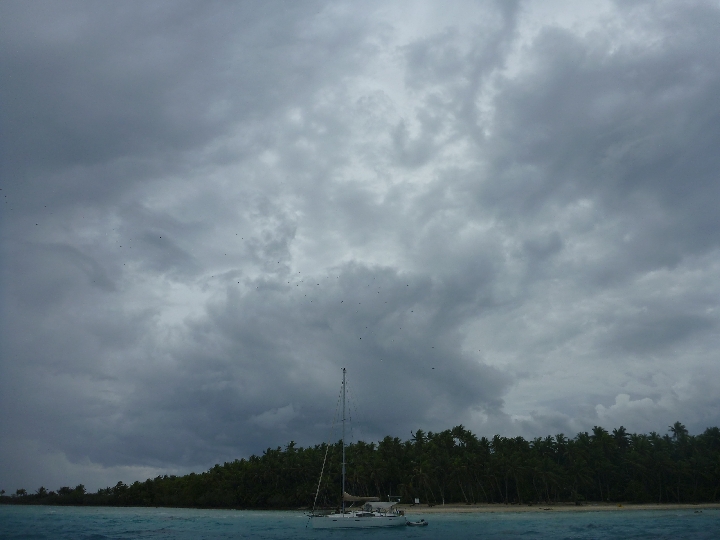 Just as we finished, Eric hollered down from the bow, "Sharks!" I put my mask in the water and saw four or five black tip sharks, some of them almost as large as I was, swimming toward me. Even though I know that black tips don't tend to be aggressive toward humans, I still felt a bit apprehensive; there's still something primitively intimidating about swimming with sharks. Drawing on my training from hiking wilderness trails in cougar habitats, I kept my eyes on the sharks, made myself as large as possible, and swam slowly, calmly, back to SCOOTS. The sharks never bothered me. 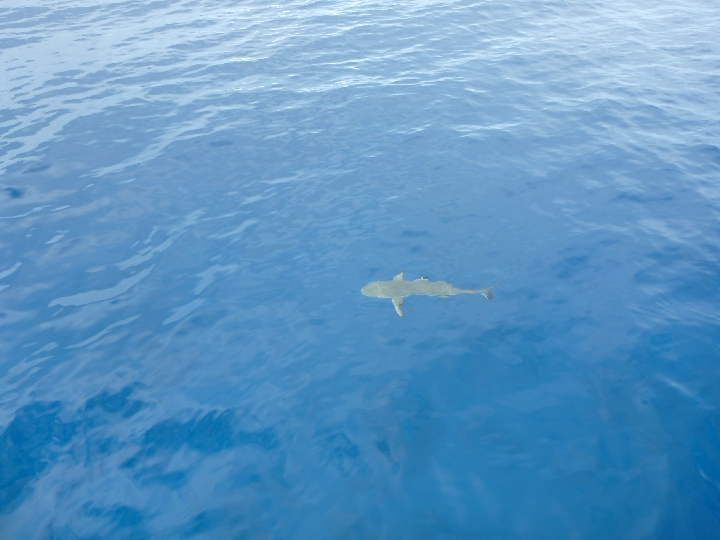 When the storm came, bringing 25-30 knots of SE wind and choppy waves 3-4 feet high, whipping the once-placid anchorage into a windblown hobby horse ride, we were glad of our preparations. 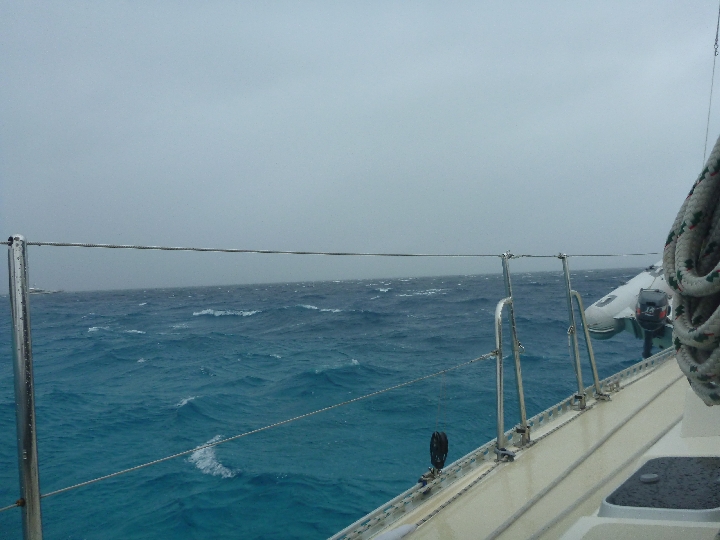 Storms with SE winds are particularly unpleasant in the Suwarrow anchorage, as it's exposed to wind and waves from the southeast to the northwest. With about six miles of fetch (the distance over which waves can form) between the barrier reef to the southeast, and the anchorage, rather large, choppy waves tend to develop when the wind is strong from that direction. These waves can cause a boat to buck like a bronco, which though not dangerous can be very uncomfortable. The motion could also dislodge the anchor, allowing a boat to drag, or damage the boat where the chain attaches to it, if there isn't enough scope to absorb the shock load. 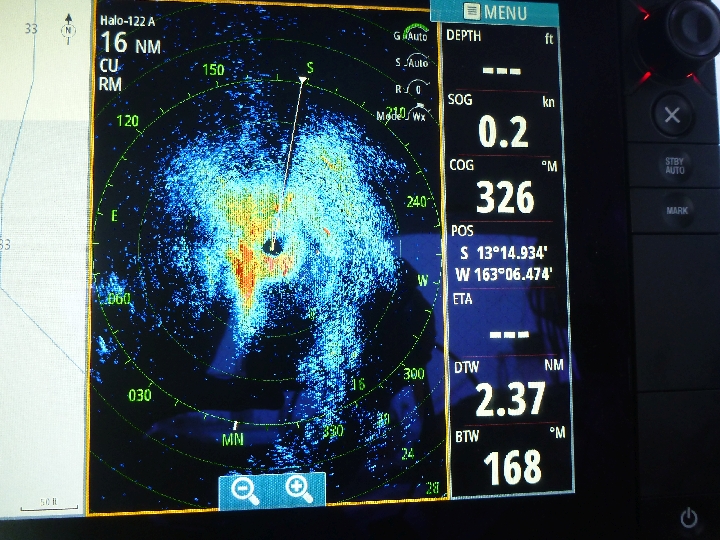 The storm as shown on our radar

SCOOTS did well, riding the waves like a Cadillac, her anchor staying put. A few boats had their anchors drag, putting them uncomfortably close to the reef; their crews had to up-anchor, drive around, and re-anchor during the height of the nasty weather, not a fun thing. 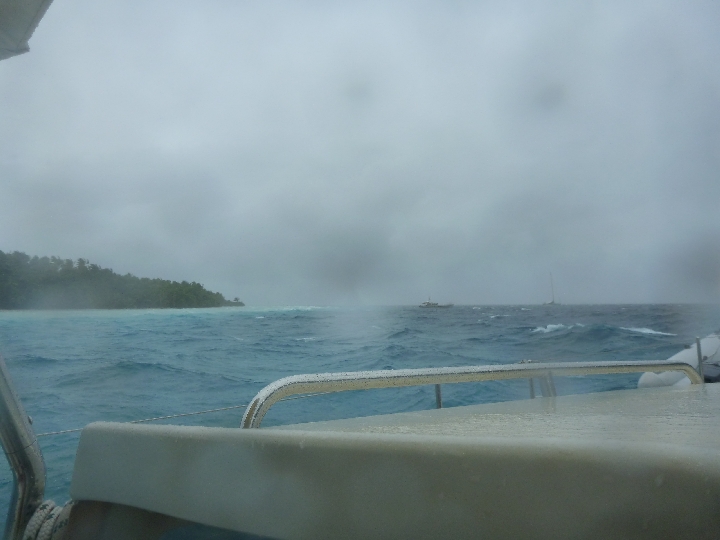 After treating us all to an afternoon of meteorological fun and games, the storm finally moved on, leaving the anchorage placid again. 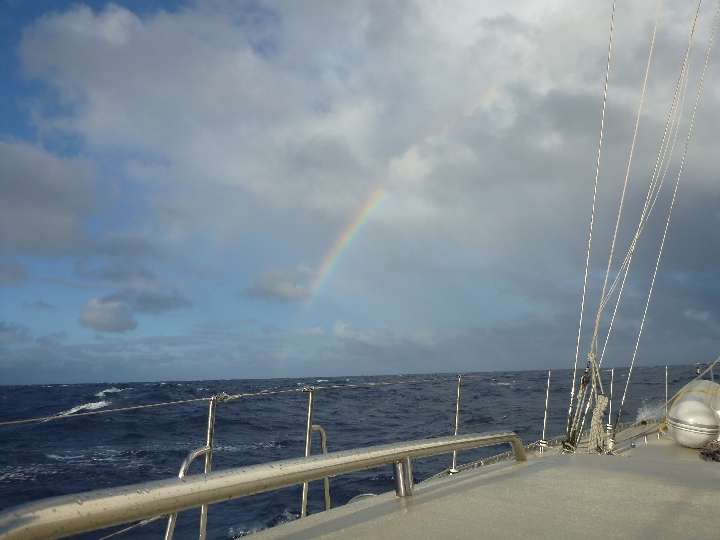 Because Suwarrow is an atoll, I didn't expect to see many different kinds of birds there, but in fact I saw five new (to me) species while we were there: lesser golden plover, wandering tattler, bristle-thighed curlew, sooty tern, and, the subject of our Fun Fact, a long-tailed cuckoo. Don'tcha love those names?

I was very surprised to see a land-based bird on Suwarrow, given the atoll's small size and remote location. I was kayaking along the shore one afternoon, looking into the trees, and just happened to see something moving among the branches. Focusing on it with my binoculars, I saw a large brown bird with a long tail, that had the general shape of a cuckoo. A cuckoo?! Way out here?! 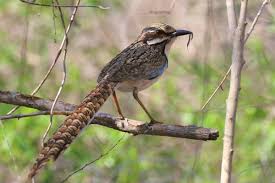 Yes, way out here. When I looked in my bird book, I discovered this Fun Fact: long-tailed cuckoos breed in New Zealand and then disperse to many of the South Pacific islands, where they spend the winter. By the way, Suwarrow is more than a thousand miles from New Zealand, and cuckoos can't land on the water. Well, not more than once anyway. So that's quite the epic trip, twice a year!

We wondered whether particular birds winter on the same island each year, bringing the new additions along to show them the way, or whether they go to different islands in different years. Why don't they all go to the closest offshore island? Why do some keep on flying, thousands of miles, to farther islands?

Anyway, it was cool to see the cuckoo, and read about its amazing travels. They make our own seem quite cushy by comparison.
Comments
Newer Older
Contents