A change of plans, a wet passage, a secret volcano, a piece of America, and some Fun Facts Cushy as our travels may often be, compared to those of the long-tailed cuckoo, the 450-mile passage from Suwarrow to American Samoa was not particularly comfortable. Variable 20-to-30 knot winds - coupled with steep, 3-to-4 meter, beam-on seas that routinely rolled SCOOTS over onto her starboard rail, submerged her hull windows, dumped copious gallons of salt water onto her decks and splashed it liberally into her cockpit - continually confounded our wind pilot, Leela, requiring us to spend most of our watches sitting at the back of the cockpit - often in the rain - pulling SCOOTS back on course whenever Leela let her drift. We eventually took Leela off duty and replaced her with Bender, our electric autopilot, who steered us dependably for the rest of the way.

Fun Fact #1: crystal blue perfusion. When a wave is getting ready to break, it gets tall and pointy, and very thin at the top. If it's tall enough that there's nothing but open space behind it, and light shines through the very thin part, the water is a brilliant, gorgeous, crystal blue color. We saw this many times on our passage, and I would have loved to take a photo of it, but as seeing nothing but space behind a tall wave implies that it is at least as high as your eyes are, I was usually reaching for something to hang onto, rather than for a camera.

Anyway, it was not a fun passage. I can hear you saying, "Quit your whingein'. You get to live on a frikkin' sailboat in the South Pacific." And you're right, of course. But I though it important that I point out, to any would-be voyagers who might presume that South Pacific sailing is all pleasant downwind sails, sunny days and moonlit nights, that sometimes it's nothing like that.

Fun Fact #2: volcano breath. As we approached within fifty miles or so of American Samoa, we noted a hazard marker on our chartplotter. Clicking on it provided more information: Volcanic Activity. Hmm, that's different. We learned later that a recently-discovered undersea volcano with a base 21 miles across, called Vailulu'u, is growing up from the seafloor in that area, currently rising 14,300 feet, to within 1800 feet of the surface. We wouldn't have to worry about running into it, but we did keep a lookout for anything that might indicate an impending eruption. Later, as we'd sailed downwind a bit, we smelled a faint sulfury smell, indicating that Vailulu'u was breathing. Here are a couple of cool websites, in case you want to read more about Vailulu'u: http://www.whoi.edu/oceanus/feature/voyage-to-vailuluu and http://www.nurp.noaa.gov/Spotlight/UnderseaMtn.htm


Where the heck is American Samoa? We traveled from Suwarrow (the black arrow) to American Samoa (the red arrow). It doesn't look that far, until you realize that each square of longitude on this map is about 1200 miles. 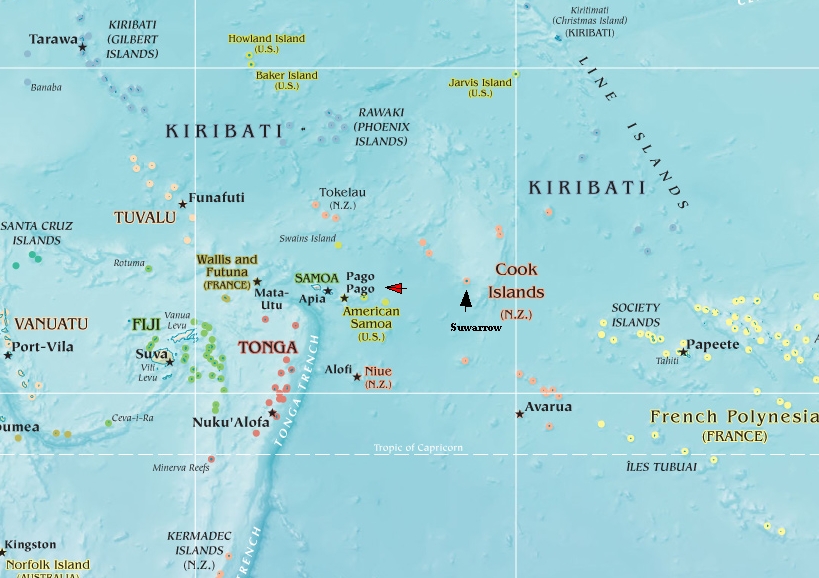 And so, after two days of this wet adventure, when we came within sight of American Samoa's Manu'a Islands, that lie about 70 miles east of our final destination of Pago Pago Harbor, on Tutuila Island, we decided to take refuge in a calm bay on the lee shore of the island of Ta'u, spend the night there, get some rest, and continue on to Pago Pago in the morning. We rejoiced at the first flat water we'd seen in days, and fell asleep with the scent of plumerias and gardenias, and the songs of night insects, wafting out to us from the jungle-covered hills.

We did everything as planned, except for the "continue on to Pago Pago in the morning" part, because we were so tired from our previous two days that we overslept and didn't get up early enough to arrive in Pago Pago before sunset. So we sailed about five miles west, to the next island, Olosega, and dropped anchor in a gorgeous bay on the northern side of that island. 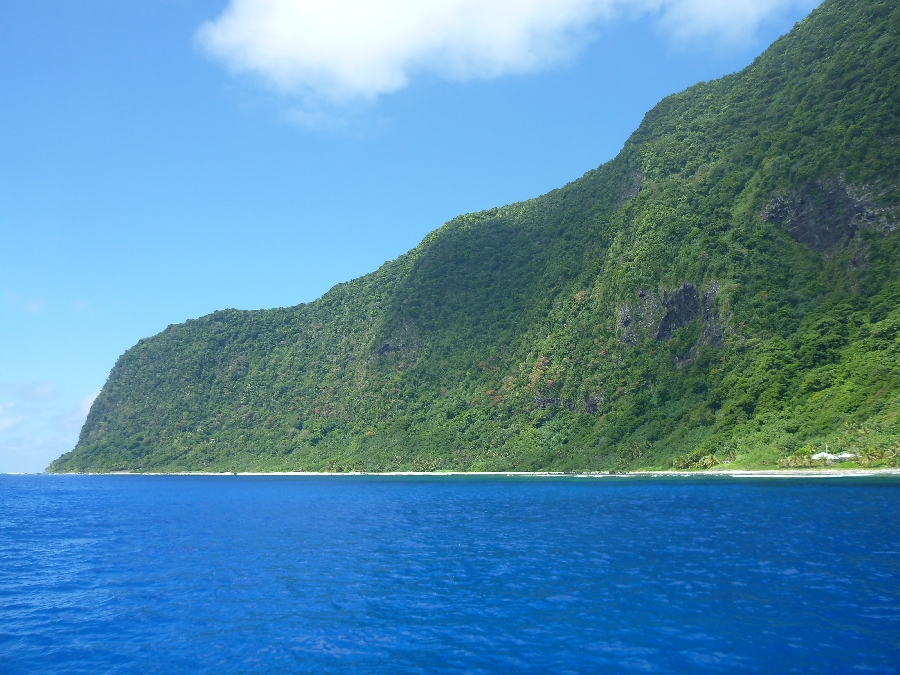 Olosega's bay in the sunlight

Olosega, and its twin, Ofu, are stunningly gorgeous islands, joined by a short bridge. Their steep black cliffs, covered with dense green vegetation, and edged with white sand beaches and turquoise coral reefs, rivaled the beauty of Daniel's Bay on Nuku Hiva. 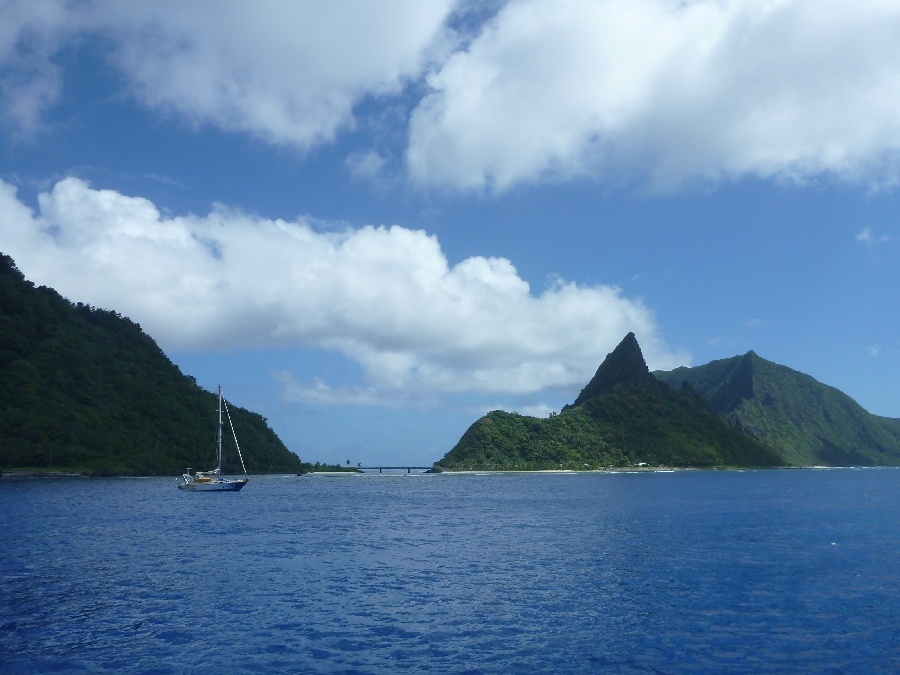 The bridge joining Olosega and Ofu

The following morning, we got up at 4:30 am, raised anchor in the dark and headed out, making good on our second attempt to get to Pago Pago in the daylight, arriving at about 2:30 pm. 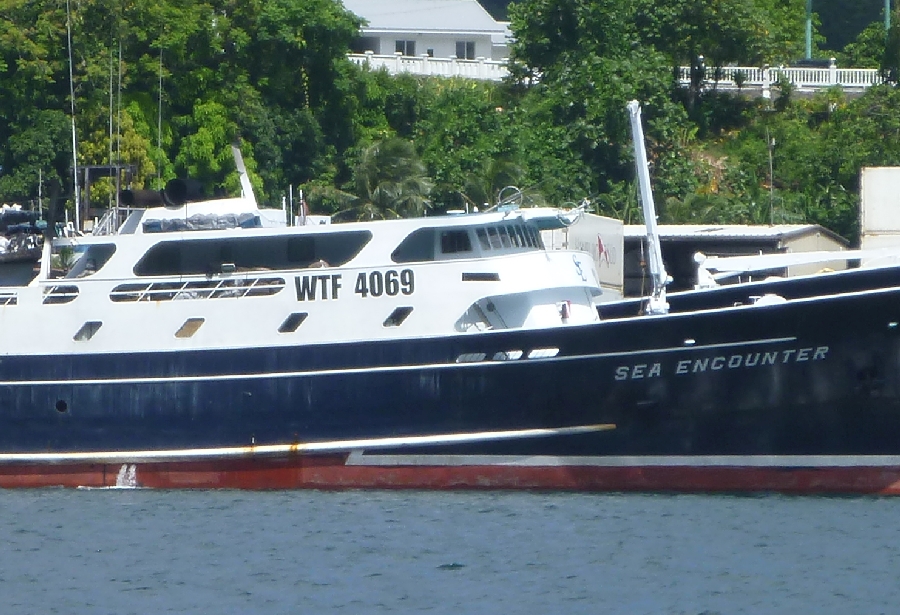 We were amused by the call sign on this tuna boat

We had the dinghy in the water and the outboard loaded onto it within fifteen minutes of dropping our anchor the second time (more about the holding - or lack of it - in Pago Pago Harbor later). Eric buzzed to shore to handle the clearing-in process, while I settled SCOOTS in after her trip. 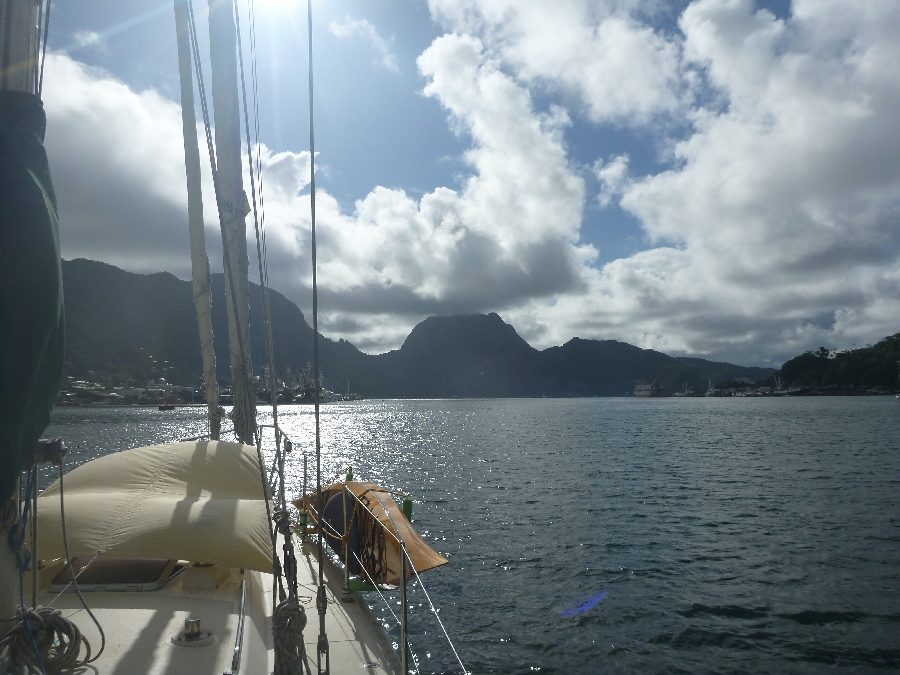 The view from SCOOTS' deck, looking toward the Starkist cannery and the main harbor.

Fun Fact #3: Samoan pronunciation. Unlike the way most Americans pronounce the word "Samoa," with the accent on the second syllable (Sa-MOH-ah), the Samoans accent the first syllable (SAH-mo-a). Also, Pago Pago is pronounced "pango pango," with a very soft-G sound. That's because the G's in the Samoan language are actually pronounced as "ng."

The name Pago Pago calls to mind a remote and exotic place, which it is. Maybe it's because Pago is a word that doesn't normally come up in English conversation, or maybe it's the repetition (like Bora Bora). Anyway, when you arrive in Pago Pago, you really know that you're not in Kansas anymore, or even in California, where we left from, but you are, amazingly, in America. 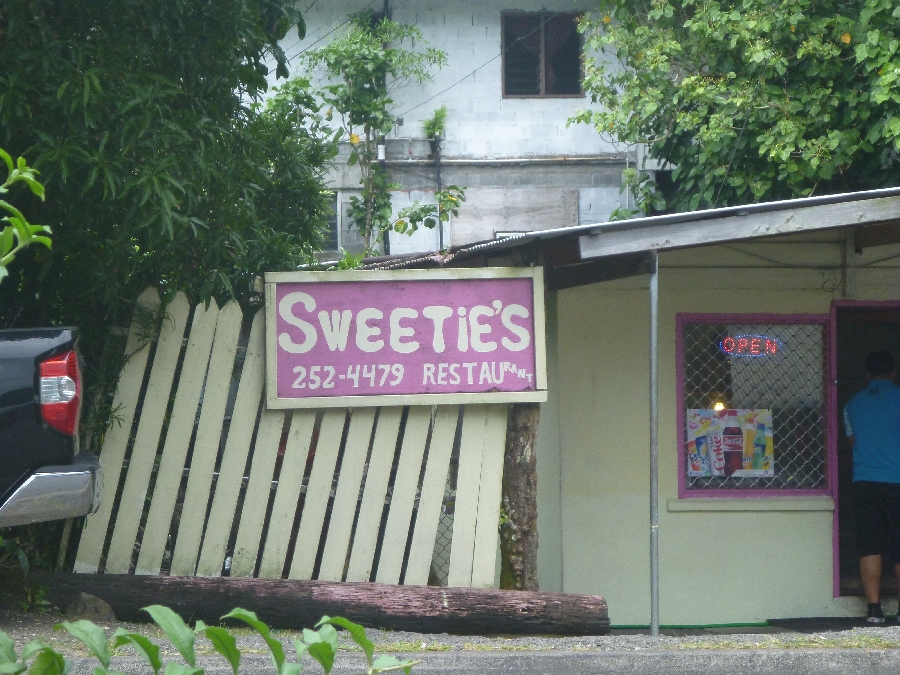 American Samoa is a piece of the United States, plunked down in the middle of the South Pacific. English (and Samoan) are spoken here, the currency is US dollars, and US flags fly from flagpoles. That's actually why we came here: as soon as we'd arrived in Suwarrow, which is about the remotest place you can imagine, we'd received notification via our at-sea email that an offer had been made on the house we're trying to sell in the States. To complete the transaction, we'd need Internet, cell phone service, and, most importantly, a US notary, none of which were available in Suwarrow, and all of which could be found in American Samoa. 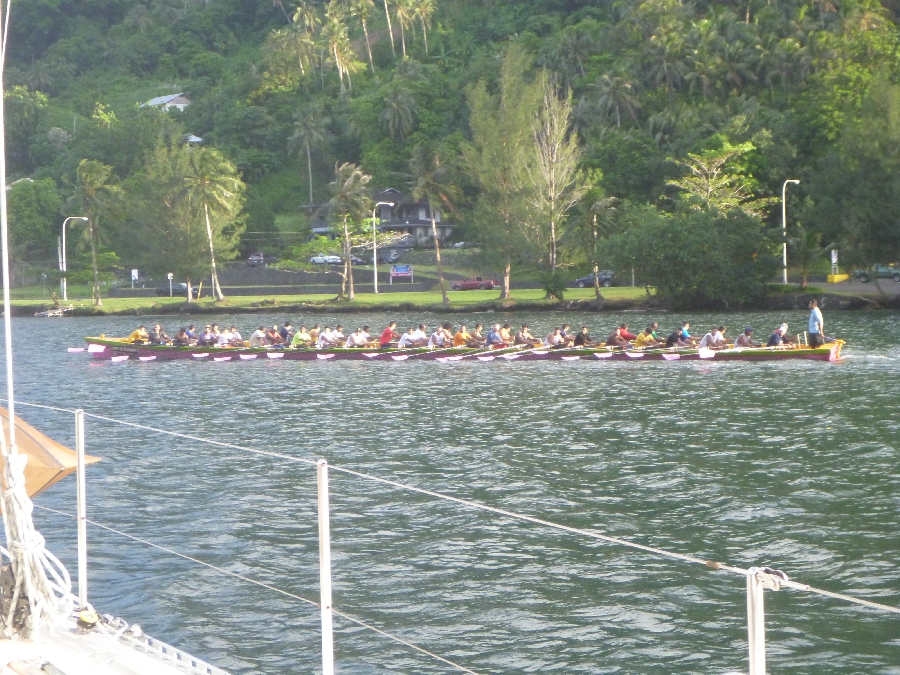 A 40-person Polynesian canoe, to remind us that we're not actually in the States

And so, our previous plan to sail from Suwarrow to the one-island nation of Niue, about 500 miles southwest, went out the window, and we headed 450 miles due west to American Samoa instead.

Eric had an interesting time, getting us cleared in, which I'll tell you about another time. When he returned, we found some wifi and he contacted our realtor, who told us that the buyers had backed out of the deal while we were on our way to Pago Pago. (Insert choice sailor words here.)

Oh well, there are still plenty of other First World things we can do in American Samoa, while we wait for another offer to materialize, the first of which was to have dinner at the McDonald's next to the dinghy dock. It was just like eating at a McDonald's in the States...we ordered in English, paid with US dollars, and ate the usual fare...except for one slight difference: the fruit bats flying past outside in the gathering twilight. Definitely not Kansas.
Comments
Newer Older
Contents