Life in Am Sam: going postal (well, going to the post office, anyway) Eric and I have been enjoying our time here in Pago Pago, getting to know the island and making the most of being in civilization.

One of the things we've been doing while we're here in American Samoa is ordering boat parts, because we have wifi and American Samoa has a post office, with a US zip code! We've been able to order items from Amazon, Fisheries Supplies, West Marine, and other suppliers, and pick them up at the post office. After almost two years in postal-service-deficient Mexico, it's exciting to be able to get mail!

Receiving mail here is a little more complicated than just walking out to the mailbox at the end of the driveway. We don't have a mailbox, and we don't have a driveway. But at least it's doable; we can actually pick up our packages here, rather than having to send them to a good friend or family member, and then have them hold onto the packages until we happen to visit. When everything goes as expected, the round-trip mail-pickup process takes about 30 minutes.

Our address for receiving mail here includes Eric's or my name in the first line, the phrase "General Delivery" in the second line, then Pago Pago, American Samoa 96799 for the third line. Who knew it could be that easy?

Actually getting our packages takes a little longer than it might in the States, because all the mail comes and goes by airplane. Only two flights a week travel between the States and American Samoa, one on Friday and the other on Monday (both stopping in Honolulu), and the post office only puts mail on the one that arrives on Friday.

So the first day we can even hope to see our mail would be Saturday morning, and that's IF the postal workers have finished unloading, scanning and sorting the mountain of mail that arrived on Friday's plane. This week, for some reason, the plane didn't come at all on Friday, so the mail was delayed until the next flight came, on Monday, which meant that Tuesday was our first pickup day.

To get our mail, we dinghy from SCOOTS to the dinghy dock behind McDonald's, tie up, and walk the half-mile or so to the post office, taking refuge under a handy overhang or two for a few minutes if a short downpour (or two) comes through while we're walking. At the post office, we ignore the front door and walk around to the Back Door. The hours during which the Back Door is unlocked have changed three times since we've been here, but right now, it's open Monday through Friday 8:30 am to 3 pm, Saturdays 11 am to 3 pm. Like many businesses in American Samoa, it's closed on Sundays. 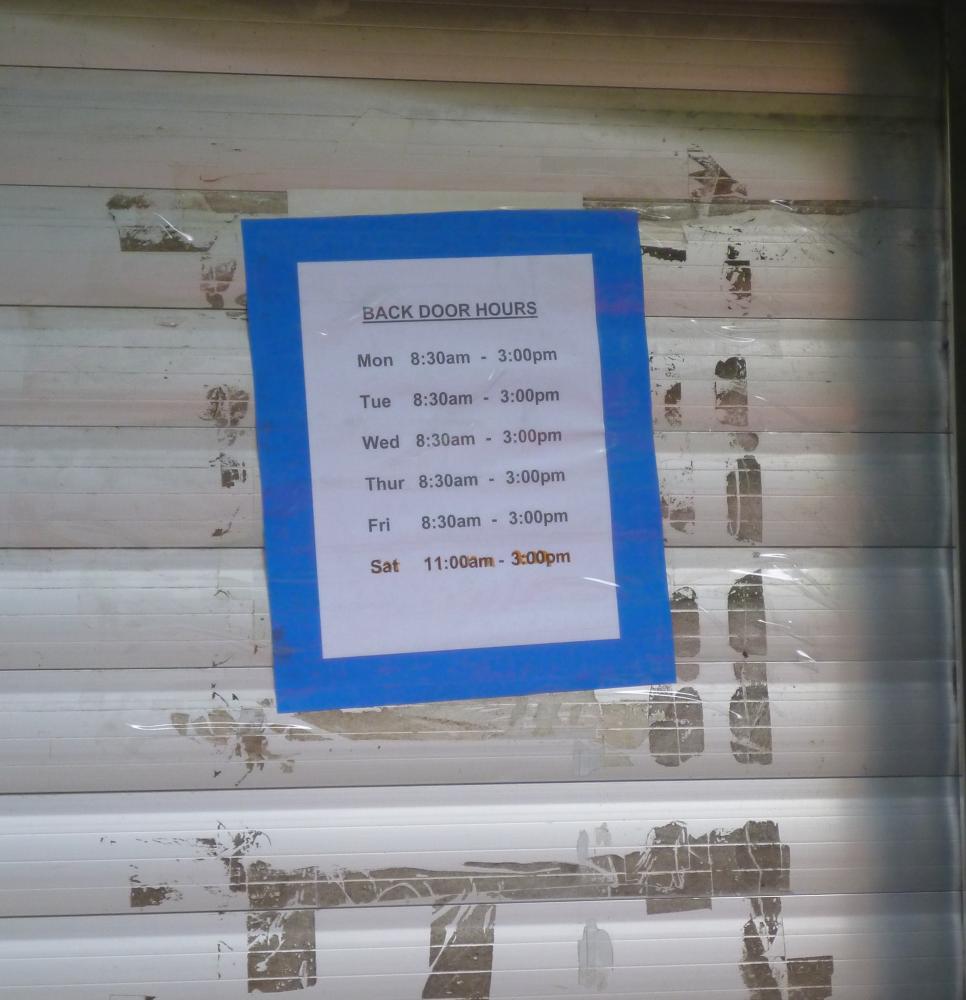 If we've managed to come during current business hours, we walk through the Back Door, and enter the Back Room. Three or four Samoan customs workers hang out on the left, a fleet of mail carts takes up most of the right half of the room, and a dozen or so people crowd into the remaining space, waiting to pick up packages. Except for Eric and me, who are usually the only palangi (causasian) customers, all the rest are Samoan residents with PO boxes. This ratio is typical of our experience: we're usually the only non-Samoans, anywhere we go on the island. The Back Room is air conditioned, so once inside, no one is in any particular rush to finish and get back outside. Then again, nothing happens fast in American Samoa, anyway.

The Back Room adjoins the rest of the post office, behind the counter; the part you typically wouldn't see. It's about what you would expect: piles and piles of boxes (most of them having suffered - some grievously - from their airplane ride); boxes on the floor, on carts, in bins, stacked against the wall, in cubbies. Some of them have the names or PO box numbers of the intended recipients; many are still awaiting their designations. 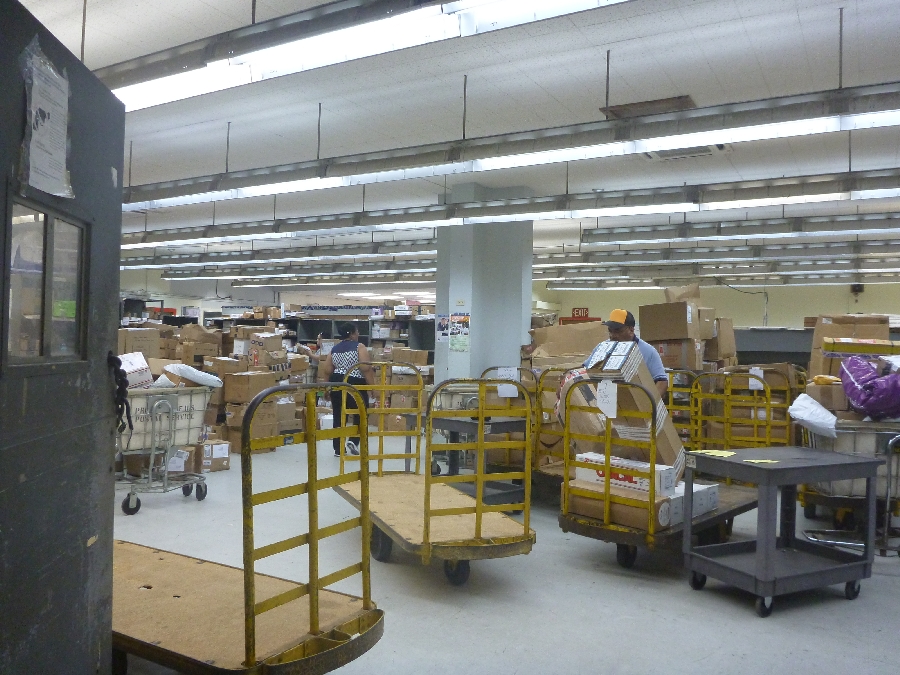 When the postal worker finishes distributing packages to a customer, Eric hands her his driver's license. The worker looks at Eric's name, disappears into the cardboard box wilderness, and returns with some subset of the packages that should have (according to their tracking numbers) arrived in the post office. When Eric asks about the rest of the packages, the worker says, "We haven't finished scanning that pile of boxes over there yet," she says, pointing to a mountain of squashed and lopsided, formerly-cube-shaped boxes. "Come back tomorrow."

We thank the postal worker, take the packages into the Back Room, and set them down on the desk near one of the customs workers. The conversation then generally goes something like this:

At that point, the customs worker will usually open up one package, look at the contents (boat parts, surprise, surprise), and then wave us through with the rest unopened. We exit through the Back Door, re-emerge into the steamy Samoan air, now seeming even more steamy in contrast to the air conditioning that we just left, and sit on a conveniently-placed bench to unpack our booty. We throw the packing materials away in a nearby dumpster, arrange the items in canvas bags or our backpack, walk back through town to our dinghy (dodging downpours as needed), and return to SCOOTS, where we start the process of putting our new items away or fixing things with them. Tomorrow we'll do it all over again. 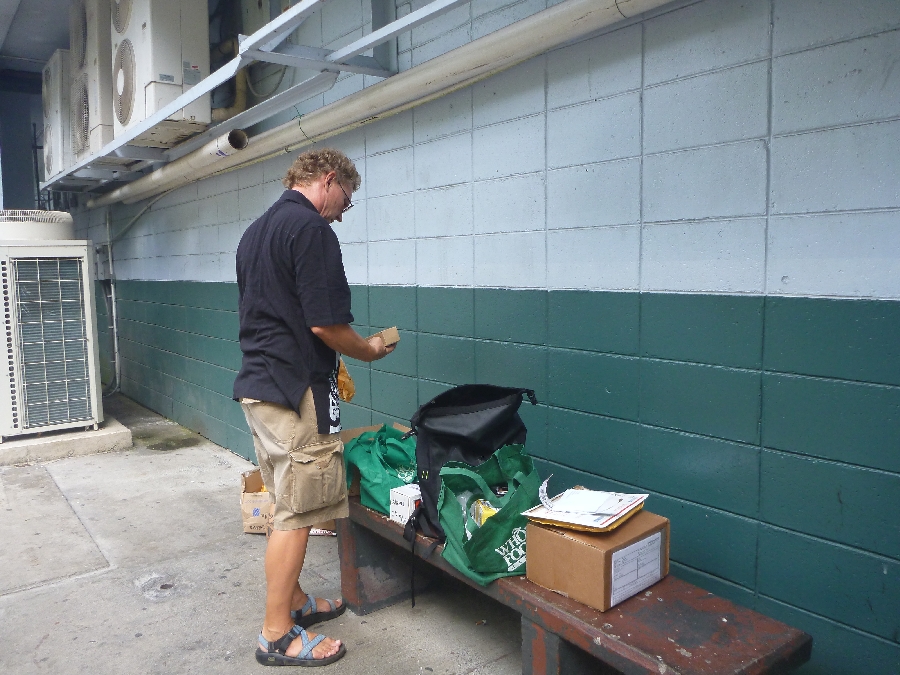