Life in Am Sam: projects, a low-tech tsunami warning system, WWII guns, a tragic accident, a friendly Samoan, and some Fun Facts It's been a busy couple of weeks for the crew of SCOOTS, here in American Samoa. We've been doing so many things that it's hard for me to know what to share in the blog. We've made numerous trips to the post office to pick up items that we've ordered online; we've walked or taken the colorful and musical Samoan buses to grocery stores to do some shopping; 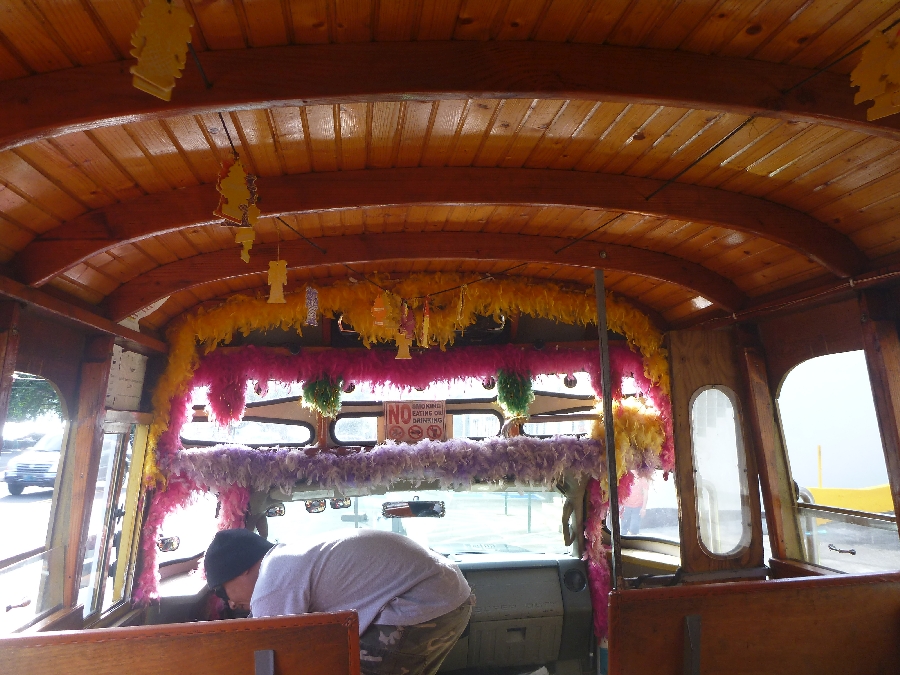 we've shuttled between SCOOTS and the local gas station in our dinghy, filling SCOOTS' diesel tanks with 60 gallons of diesel, 10 gallons at a time; 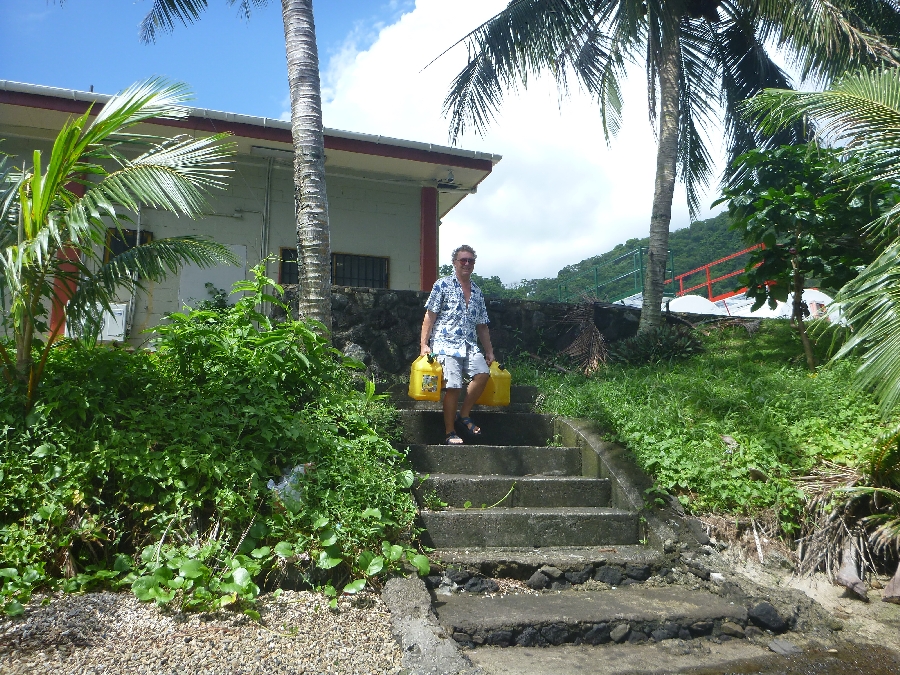 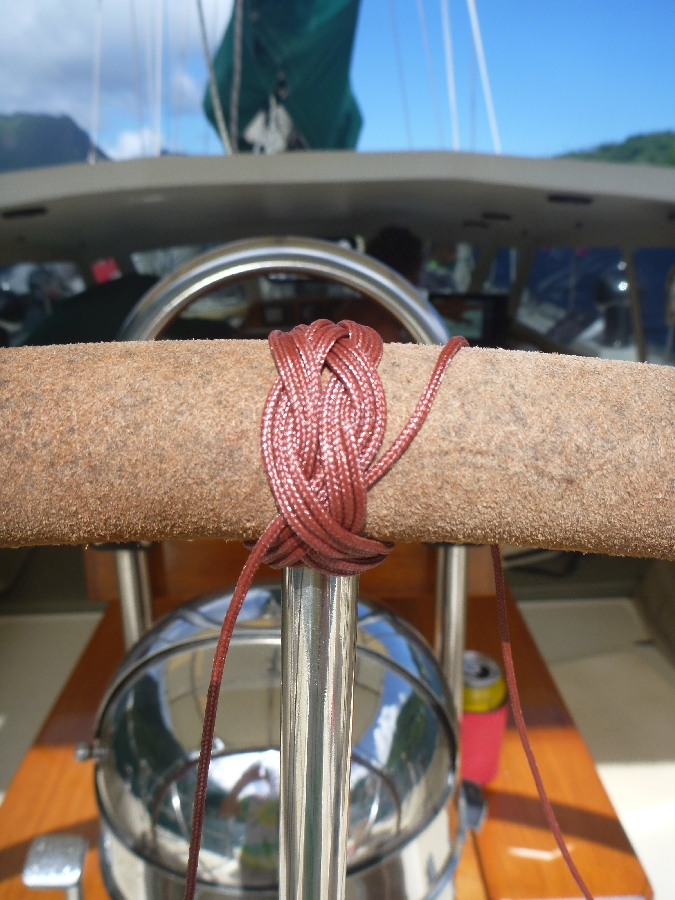 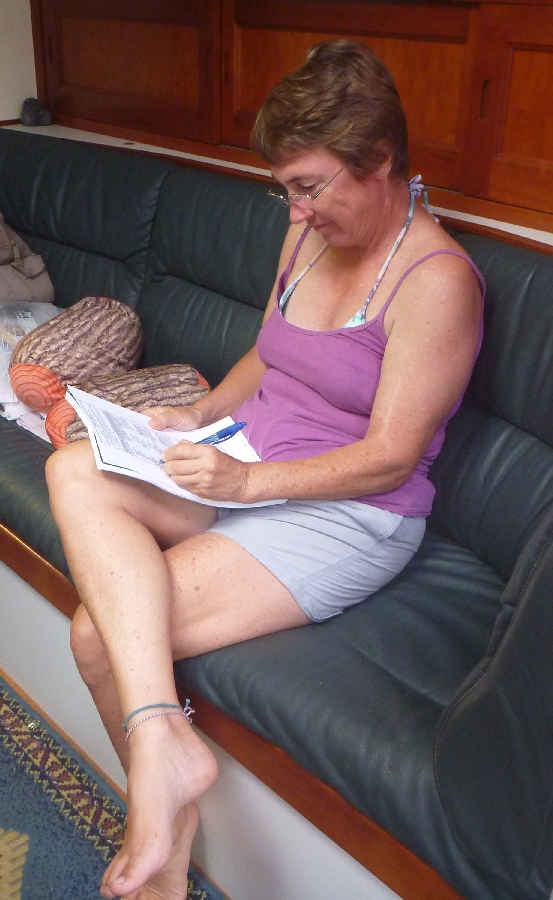 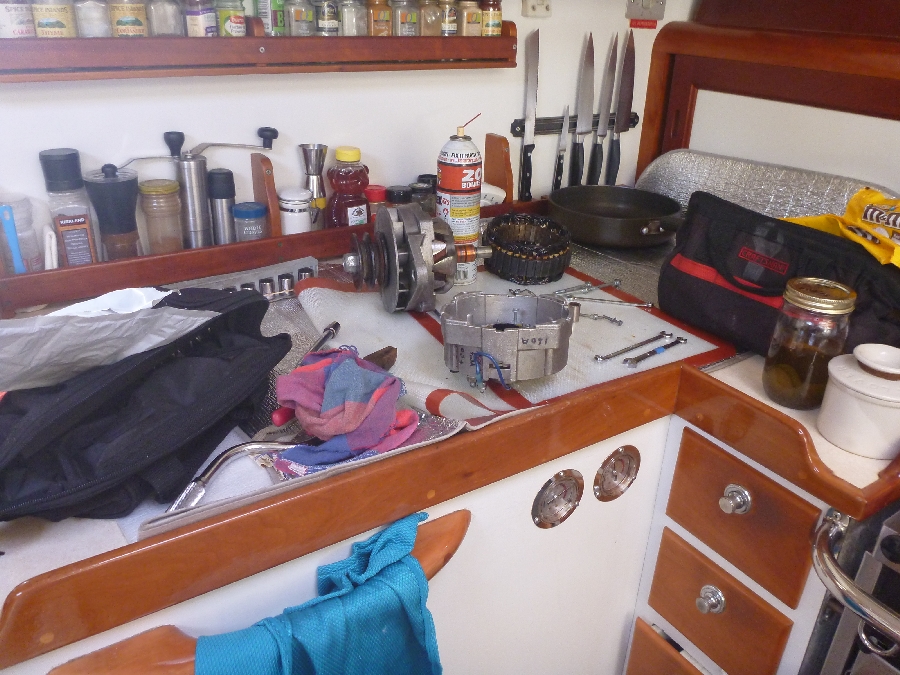 we've gone up the mast to retrieve and repair the glitchy anemometer; cleaned the cabin (an ongoing job); done several loads of laundry at the laundromat, spent time programming tiny computers, 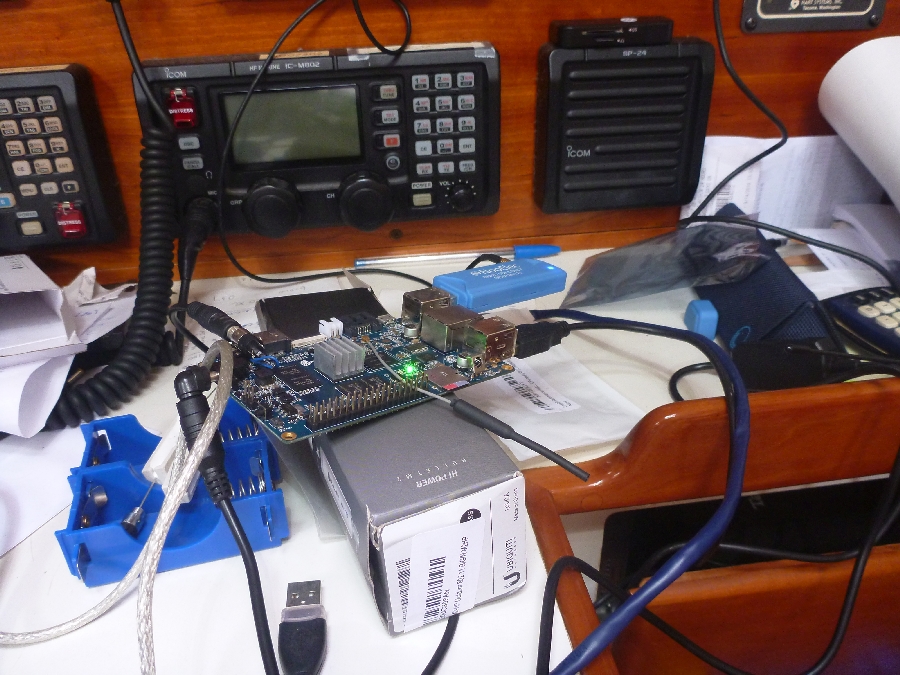 and taken some time to explore the island....

In case you ever wonder why I don't update our blog more often.

We've also taken some amazing hikes in the National Park. On three Saturdays, we went on hikes led by National Park rangers, who provided interesting insight into American Samoan culture and the many things we saw along the trail. Fun Fact: The National Park of American Samoa is the only American National Park south of the Equator. The park land isn't owned by the US government, as all other US parks are, but rather is leased from the families who own the land. Before walking some of the trails, hikers must gain permission from the landowners, who live near the trailhead.

Except for a thin veneer of habitation along some of the shoreline, the terrain of Tutuila, the main island of American Samoa, is wild: rugged coastal cliffs and jungle-clad mountains, which make for fabulous hiking.

We took two hikes to the northern coast, near the seaside village of Vatia (#1 on the map), with Rangers Pua and Warren, where we saw, among many other interesting sights, this example of a Samoan low-tech tsunami warning system. Yes, that's a gas cylinder. 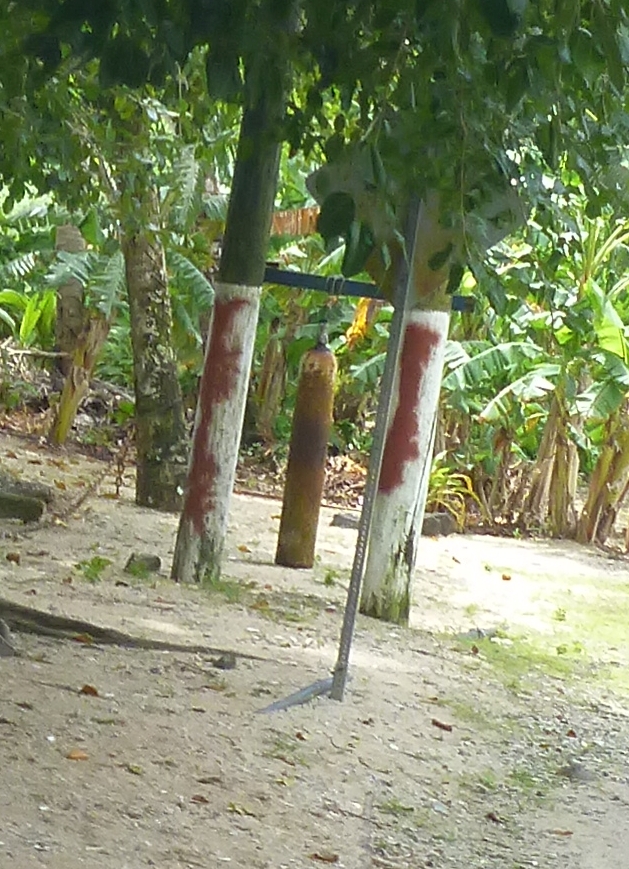 Some photos from our hike... 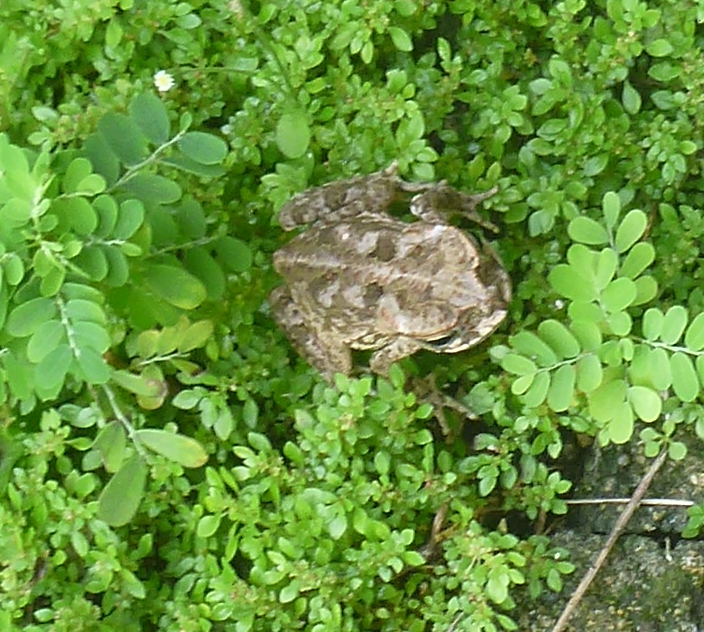 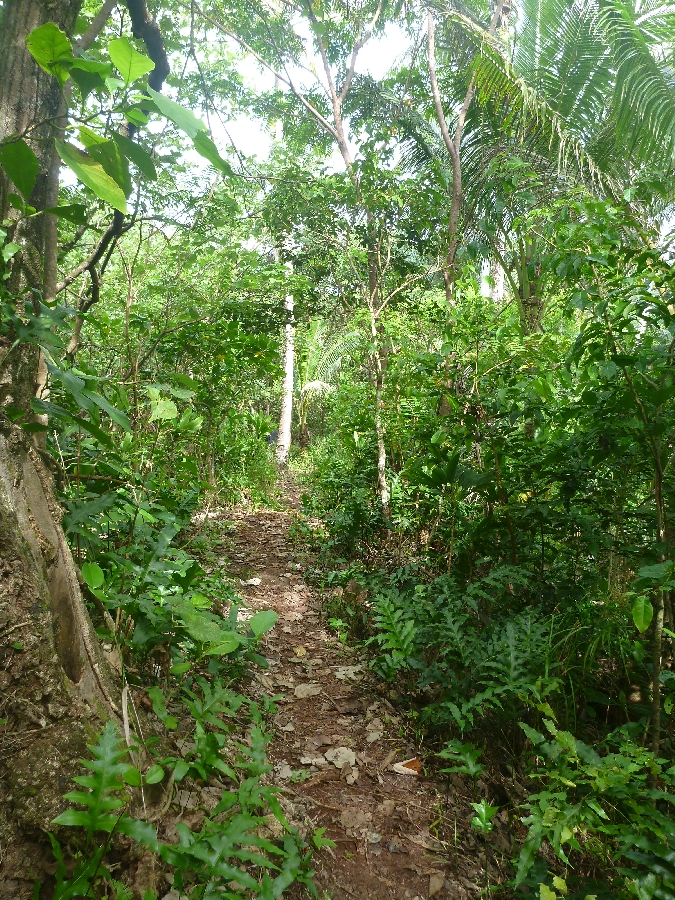 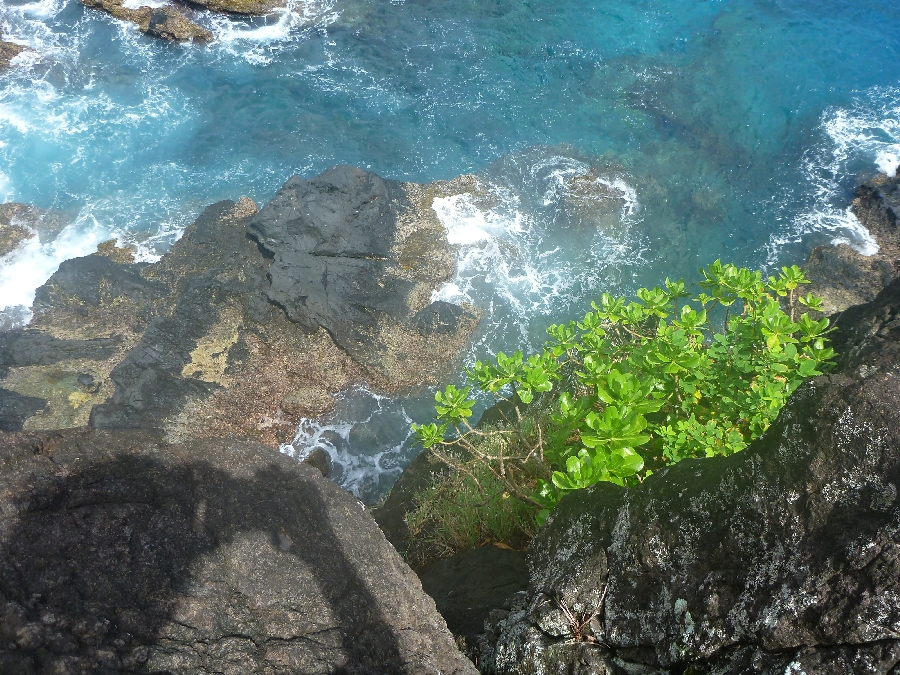 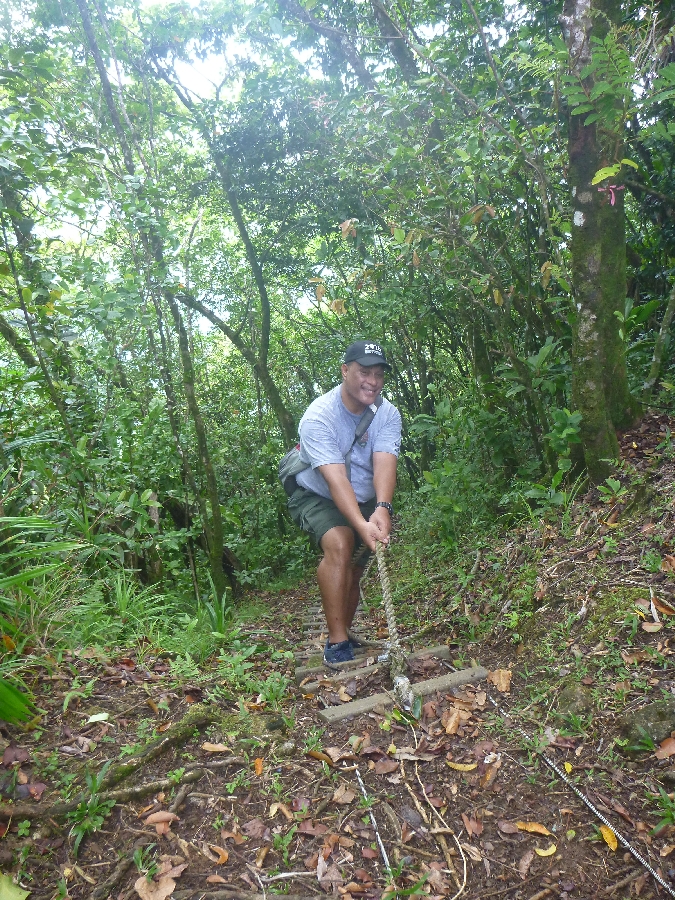 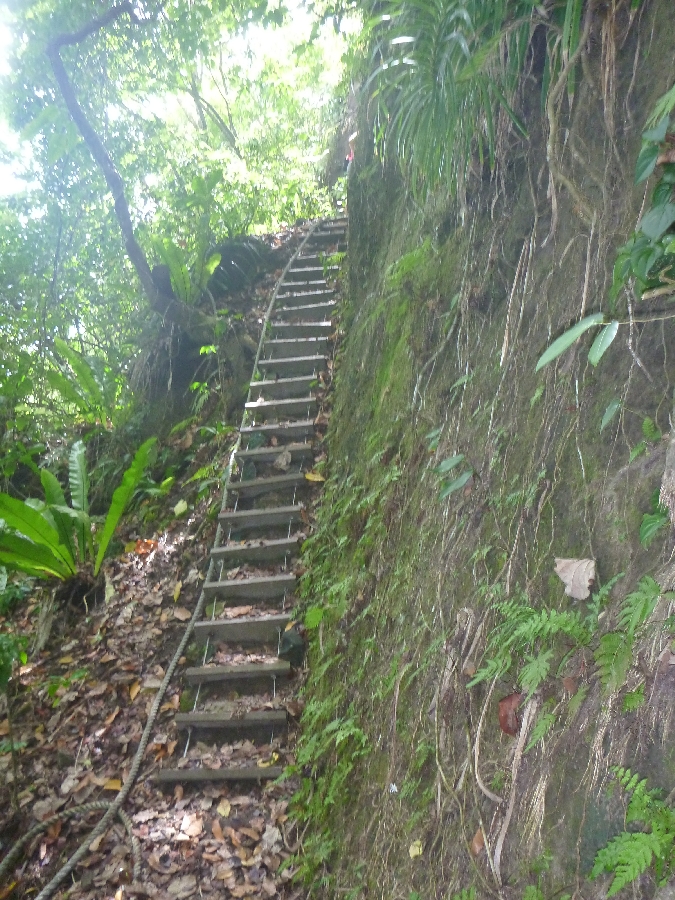 Fun Fact: When a devastating tsunami hit American Samoa in 2009, there were no high-tech tsunami warning horns as there are now (hooray for hindsight!). The lives of many villagers were saved by the use of the low-tech tsunami warning system, which can be found in many places along the coastline. Before the tsunami hit, alert villagers in Vatia noticed that the water was receding out of the bay, and banged on the gas cylinder, sounding the alarm, which sent the villagers scrambling to higher ground.

Both Pua and Warren recounted how they were driving along different sections of the coast road when they noticed the water receding. They pulled over, parked their cars, and ran up a nearby hill. A few minutes later, the tsunami arrived, sweeping both their cars into the ocean as it receded. In Warren's case, he had just left his car when the wave swept it away.

The tsunami deposited an enormous amount of detritus into the harbor where SCOOTS is currently anchored. This, along with the cultural propensity to throw trash on the ground or in the water, has resulted in Pago Pago Harbor having the (deserved) reputation of being a horrible place to try to get an anchor to set. We had to reset SCOOTS' 110-pound anchor four times within the first week, before we finally got it to hold. But that's another story.

Anyway, the hikes have also been wonderful opportunities to learn some local and military history, as well as natural history. On another morning, we hiked with Pua and Warren along the Blunt's Point Trail, the site of some WWII gun emplacements (#3 on the map). The hillside, now mostly overgrown, once sported a large military camp, a small tramway for hauling up construction materials to build the camp, camp supplies, parts to build the gun emplacements, and the huge guns themselves. 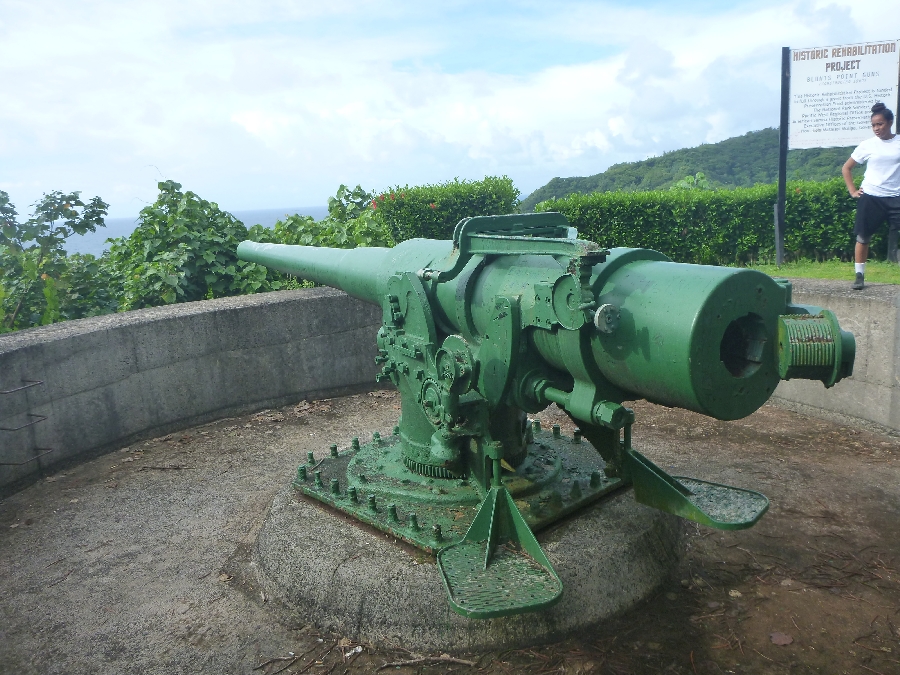 Fun Fact: with considerable effort and expense, two 6-inch guns were placed on Blunt's Point (and another two on Breaker's Point, on the opposite side of the entrance), intended to protect the entrance to Pago Pago Harbor, and the military installations it contained, in the event of an enemy attack. These guns had a range of 9 miles. That's pretty far. But not far enough: the Japanese ships that the guns were likely to be shooting at had guns with a range of 18 miles. You can see the problem here.

To solve the problem, the US military built an airfield at Tafuna, from which they could scramble planes to engage the Japanese ships before they got within 18 miles of the island. The 6-inch guns were never used, and the airfield became what is now Pago Pago International Airport. The Blunt's Point trail ends at the lower terminus of an abandoned tram, which used to shuttle passengers in gondolas across the harbor to the top of Mt. Alava. A pair of rusty gondolas, a decrepit mechanism, and yards of thick metal cable snaking along the ground, are all that remain of this once-popular conveyance, which ceased operation on April 17, 1980, after playing a role in a horrific accident. On that day, thousands of spectators had gathered on the main square to observe American Samoa's Flag Day celebrations, which included skydivers. The P-3 Orion, based in Moffett Field in Mt. View, CA, had just finished dropping the last of the skydivers when it snagged the tramway cables. The plane's tail and right wing were sheared off and the plane plummeted toward the ground, narrowly missing the main square and crashing into the Rainmaker Hotel, where it exploded. Fortunately, most of the hotel's guests were on the square watching the festivities. All six crewmembers and one Japanese tourist were killed. http://www.vpnavy.com/vp50mem_17apr1980.html

A memorial stands now stands on the site.

One day, Eric and I caught a bus to the head of the trail that runs along the main ridge overlooking the harbor (#2 on the map). The scenery was spectacular, and I especially enjoyed being surrounded by trees. We saw (or heard) fruit bats and many different species of birds along the way. During our time here, we've seen most of the two dozen or so birds that call American Samoa home, most of which I'd never seen before. When we were done hiking, and were standing by the road, waiting for the next bus to come down the hill, a woman in a pickup truck came by and offered us a ride back down the hill. We took her up on it! This is typical of the friendly nature of the American Samoan people.
Comments
Newer Older
Contents