A day on Aunu'u Island One day, we took a bus along the stunning coastline of Tutuila to Au'asi , where we caught a ferry (actually a small, sketchy, open boat, a typical aluminum motor catamaran with loose plywood sheet floors) to the island of Aunu'u, about a mile offshore. 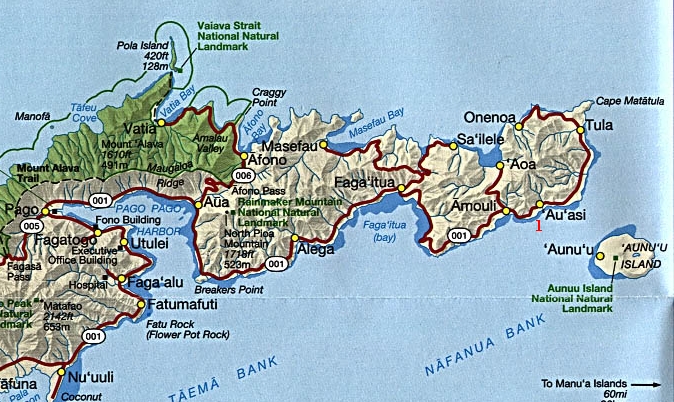 Map of Tutuila and Aunu'u

This small island has three attractions that we were hoping to see: (1) a quicksand lake that (according to Park Service intern Warren) sports a flock of gray ducks indigenous to this area, (2) a small crater lake, and (3) a swamp taro plantation. We figured that on an island with only 1.5 square miles of land, it should be pretty easy to find all three. I'll post our final score at the end of the blog entry.

Aerial view of Aunu'u (not my photo). The cleft on the right side of the island is Ma'ama'a Cove; the town is on the left.

A woman who boarded the ferry with us said that she lived on Aunu'u. On this day, the ocean swells were gentle. We asked her if the ride is wild when the swells are big. "Yes," she said, "but it's the only way we can get to and from the island." She also told us that sometimes the waves are so big that the ferries don't run at all, which can be a problem for Aunu'u islanders caught on the wrong shore. 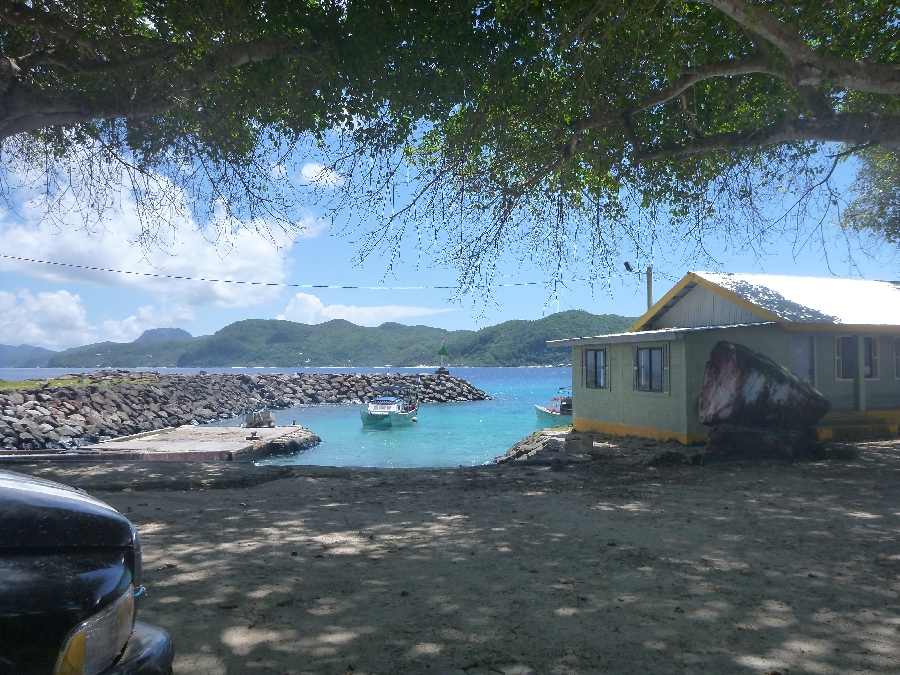 During the ten-minute ride, she gave us directions for walking to the quicksand lake: "From the ferry harbor, turn right and walk along the shoreline road until you get to the elementary school. Then turn left." That sounded easy enough. We had a very nice walk along the coast road, past beautiful white sand beaches, 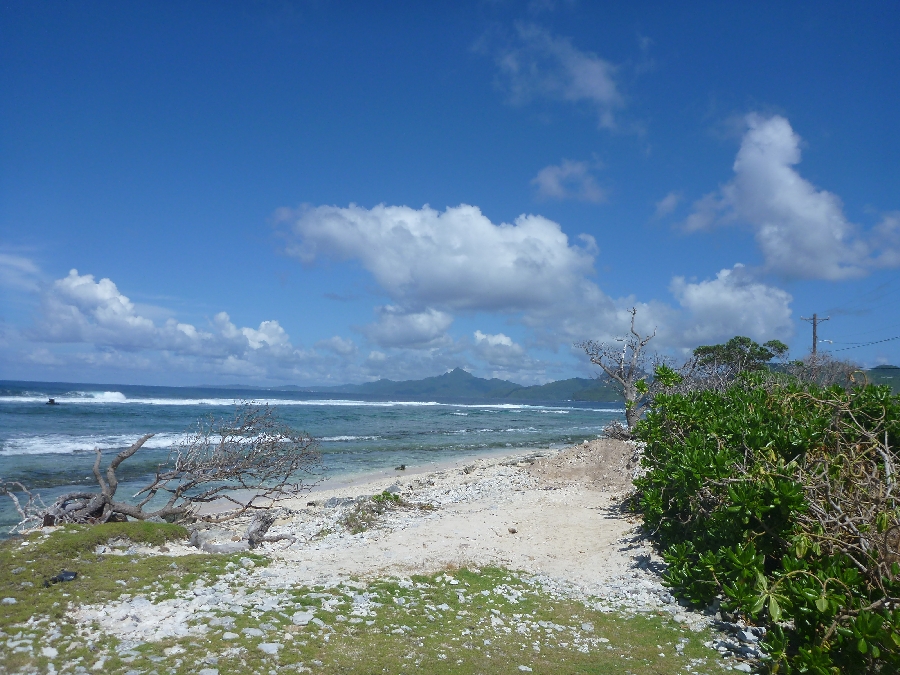 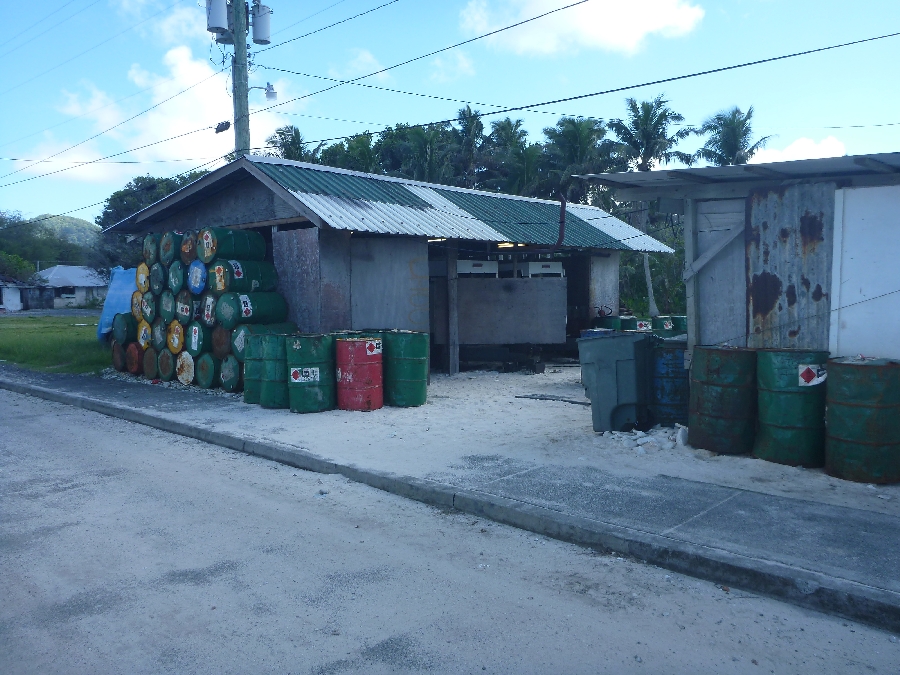 and the rusting hulks of boats that had met their end on the barrier reef. 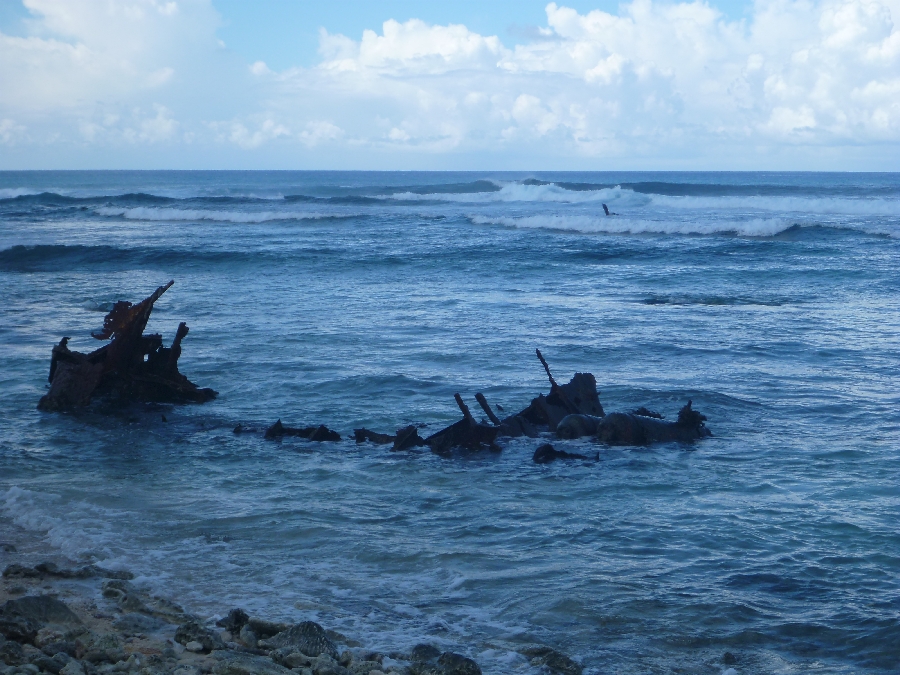 When we reached the school, we began looking for a road leading off to the left. Finding none, we wandered past the school and down a dirt track that led into the jungle. Was this the "road" she was talking about? We kept walking until we encountered a cement path that angled back toward the school grounds. We followed it, hoping that if we approached the school from a different place, we might find the "road to the left." We didn't. But we did find a man who was walking home along yet another path, who told us that he'd point out the trail to the lake. We walked with him for awhile, having a great conversation along the way.

When we arrived at the edge of the taro swamp, the man pointed to a cement causeway the led across it, disappearing into the jungle on the other side. "That's the way," he said, then added, "There are many trails on this island; some of them can be quite overgrown. Always take the path to the right, and keep to the ones that have two dirt tracks." We thanked him, said our goodbyes, and made our way across the taro swamp causeway. 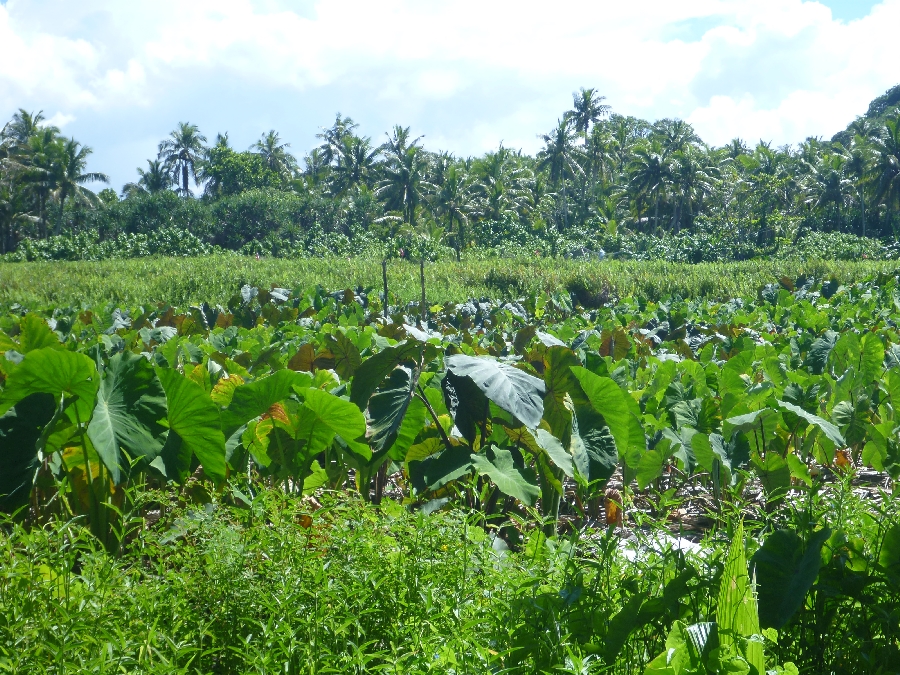 The swamp taro plantation stretched out on either side of the cement sidewalk, encompassing many muddy acres. Colorful flags waved lazily in the limp breeze at the edges of the fields, their purpose a mystery to us, possibly local scarecrows. 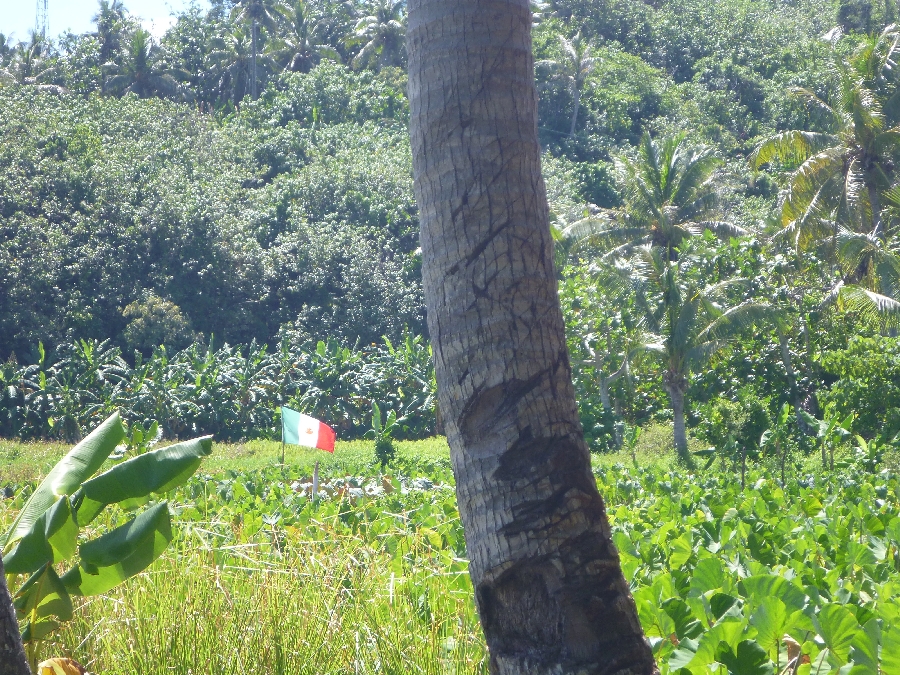 Covering the black mud between the thousands of taro plants was a thatch of finely woven palm fronds. We weren't sure whether this was intended to provide a slightly firmer footing for the taro farmers, or to prevent the growth of weeds. In any event, it must have been a huge job to cover the entire plantation with this woven palm frond floor. 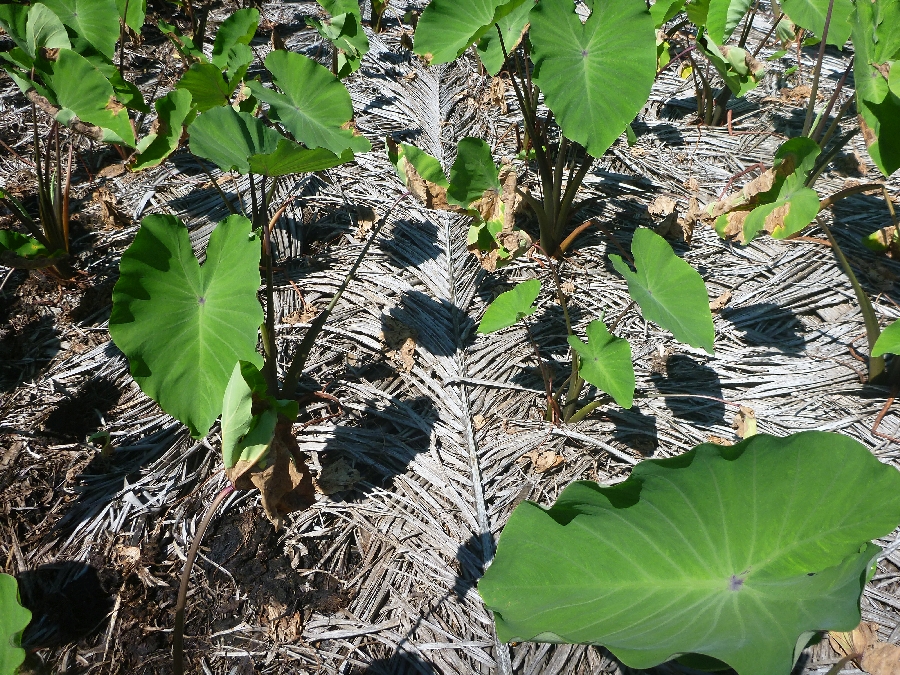 On the other side of the swamp, the path entered green jungle, winding up Aunu'u's only hill. The air was steamy, even in the shade. Birds sang effusively from hidden perches in the thick canopy, providing a pleasant and continuous musical accompaniment to our hike. Reaching the top, we found a radio tower and two paths leading down: one on the left and one on the right. 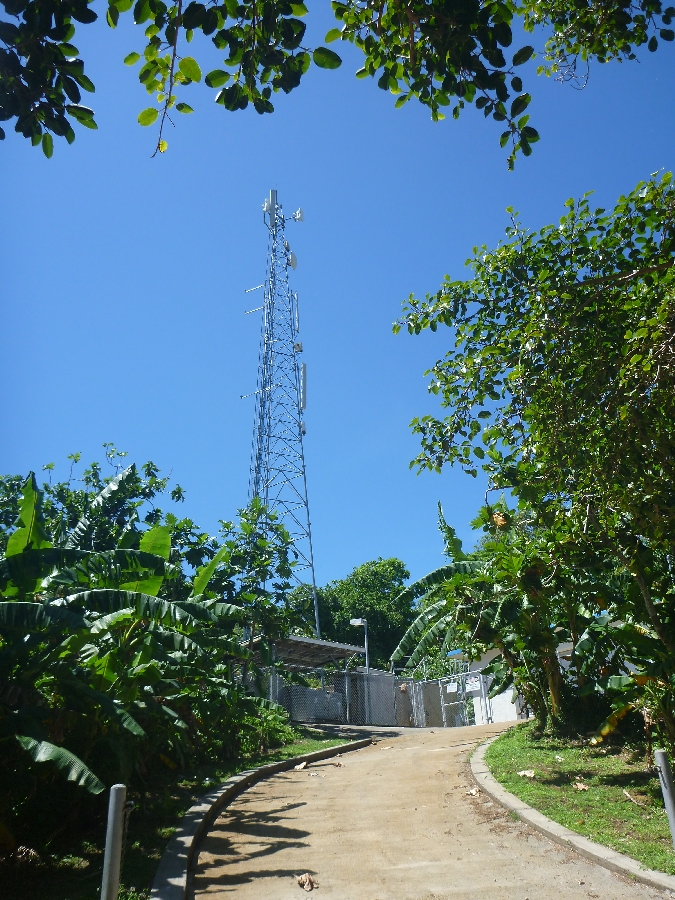 Following the man's advice, we took the path on the right, following it down the hill. As we walked, we kept peering through the thick jungle that grew on either side of the trail, hoping to glance the crater lake, but all we saw was more jungle. A booming sound - large breakers beating against a rocky coast - grew louder as we walked, so we knew we were nearing the edge of the island.

We emerged from the jungle at the edge of the jagged black bowl of Ma'ama'a Cove. 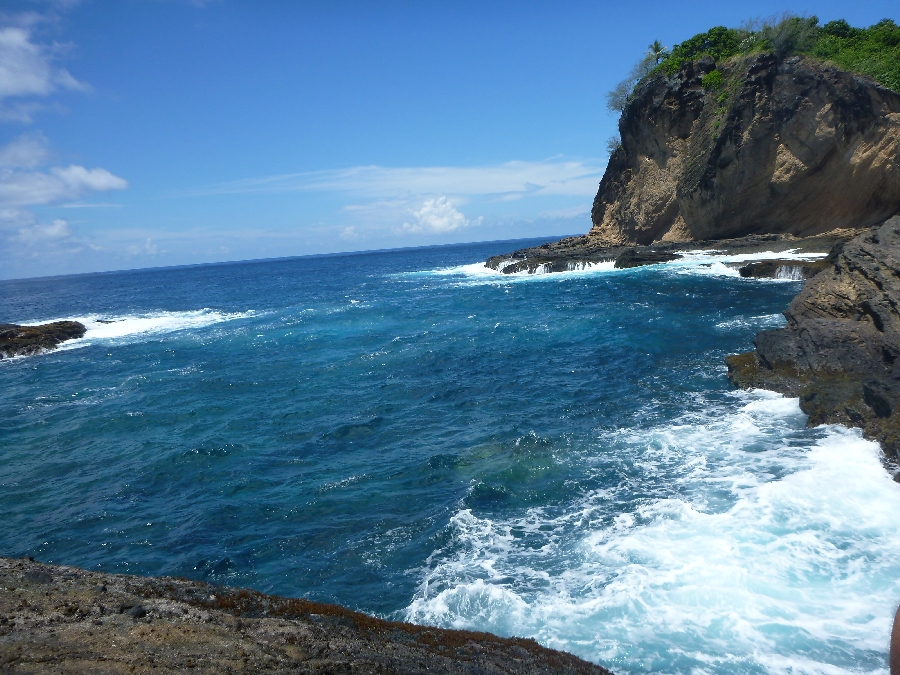 Breakers smashed against all sides of the cove, throwing salt water high enough to create shallow tidepools at the top of the cliff, and spewing huge geysers from a blowhole in the rocks. 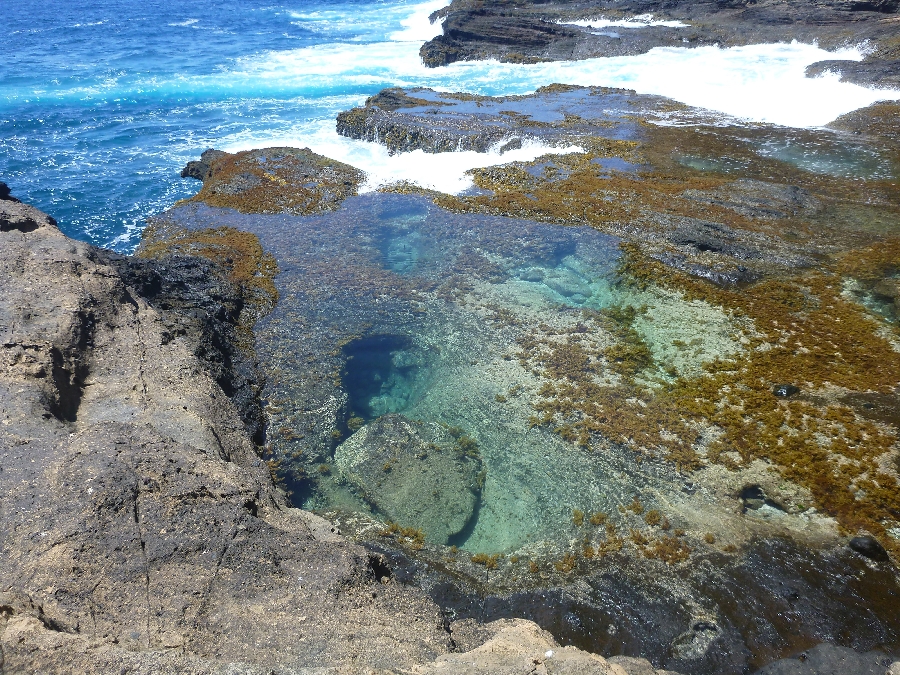 It was a spectacular scene, a place that we hadn't known about, or certainly it would have made it onto our short "Aunu'u" must-see list. 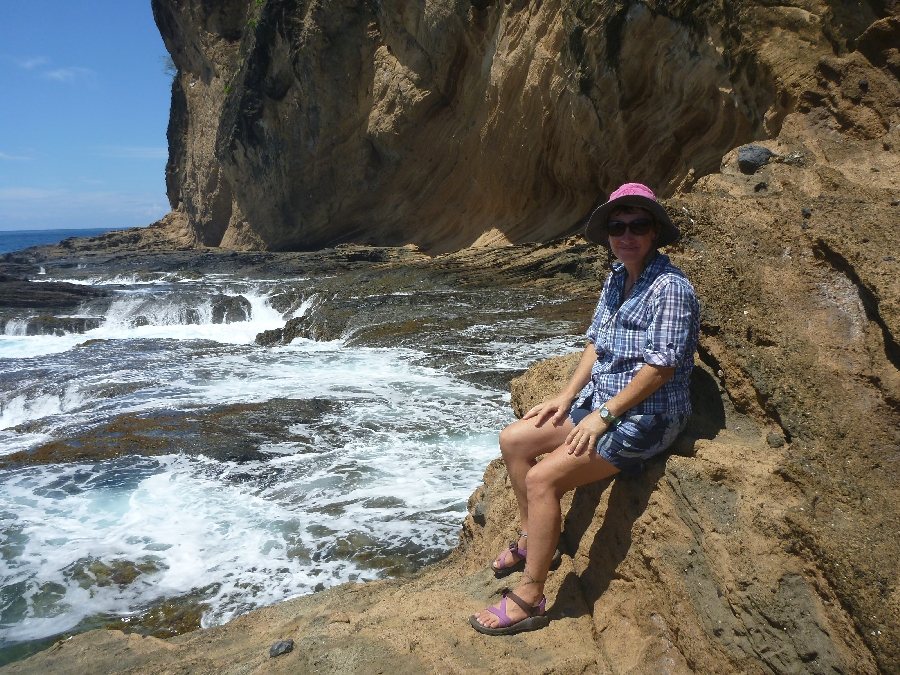 We sat in a sliver of shade next to a boulder at the edge of the cliff, and ate lunch, watching the blue water roil and crash beneath us. Van with her Woman's Sailing Seminar (WSS) lunch box. See where the WSS can take you? After lunch, we decided to head back over the hill to the taro swamp, find the road again, and take it in the opposite direction, hoping to find one of the lakes. The woman from the ferry had told us that we could walk to the lake in that direction as well, though it was "the long way." Having had no luck finding it by taking "the short way" so far, we figured we'd give it a try.

On our way back up the hill, we looked over our shoulders toward Ma'ama'a Cove, and saw, through a gap in the canopy, the glint of water. The crater lake! There it was, about a half mile away, surrounded by thick jungle, with no obvious path to its shore. Did we want to bushwhack through the jungle to reach it? No. It didn't look that interesting. We contented ourselves with the small glimpse we'd seen and continued on up the hill.

Back at the radio tower again, we took the dirt road back down to the taro swamp, crossed the causeway again, and followed the cement path to the right this time. 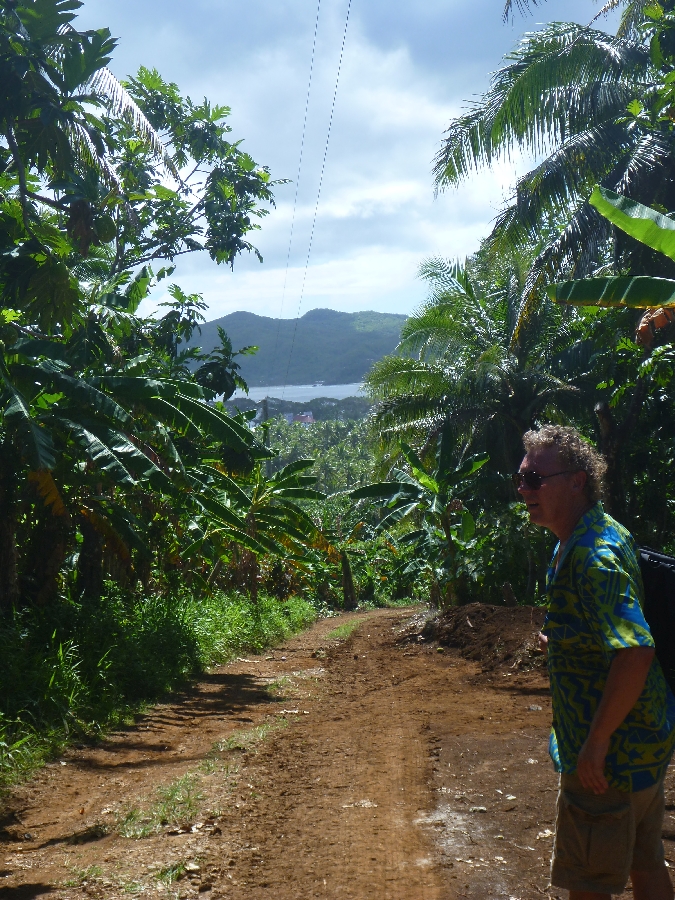 The road from the tower

The path changed to crushed coral that crunched underfoot as it wound between the small houses of the quaint village where nearly all of Aunu'u's 475 residents live. 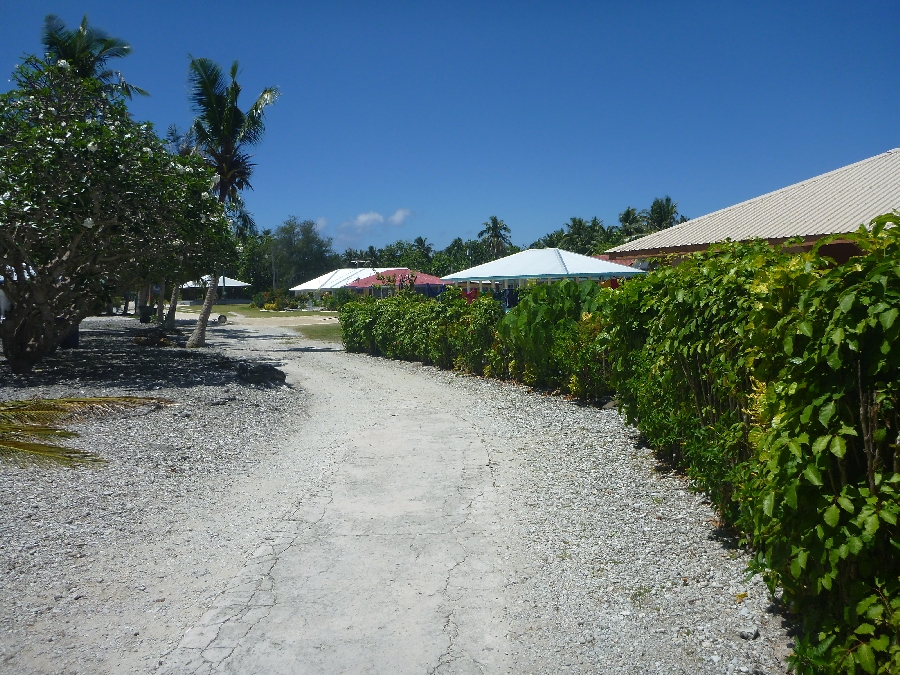 The cinder block construction of the houses and the coral-strewn grounds reminded us of the small village that we'd visited on Kauehi atoll, in the Tuamotu. 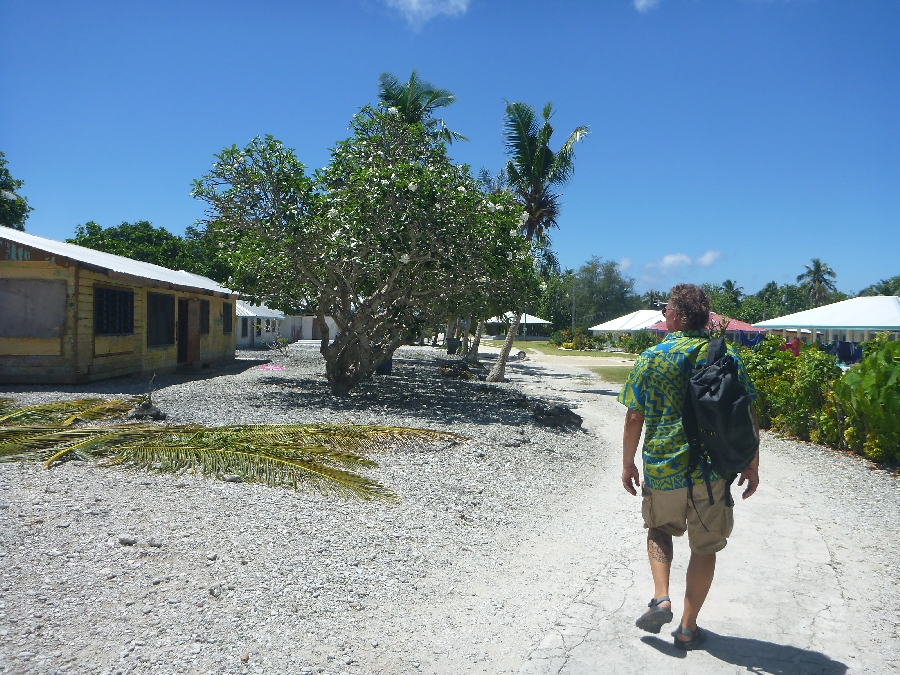 The road into town

We wandered through the town, back to the small ferry harbor and the coast road. The ferry driver was lounging in the shade under a huge tree. We asked him if the town had a store, because by now we had finished our water and were hot and thirsty from our long walk. To our great relief, he said yes and pointed to one of the houses that was painted lime green. We walked to the store, bought cold sodas, and enjoyed them while relaxing in chairs on the shady porch. 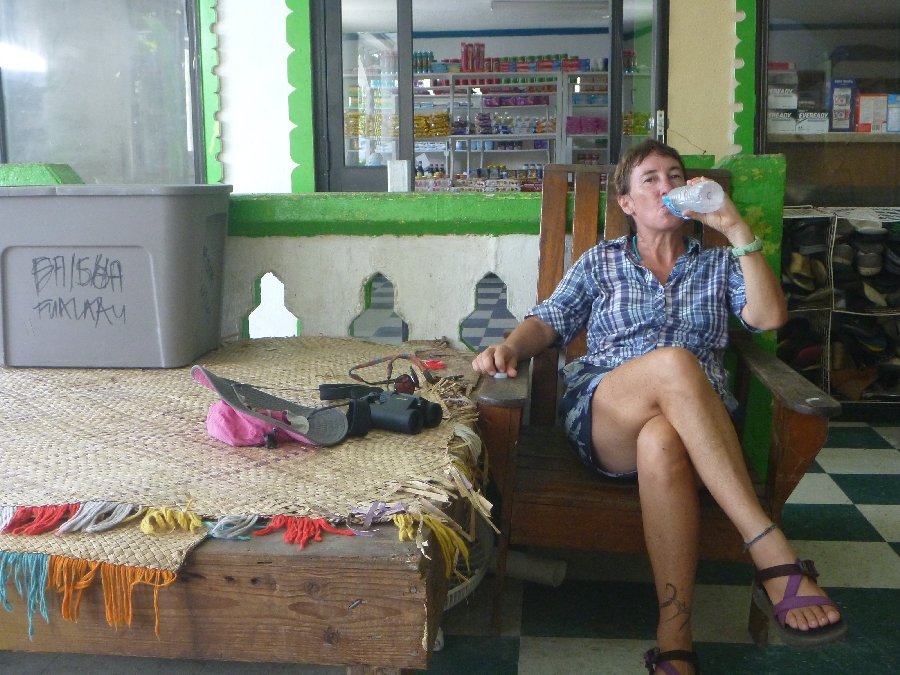 After our little break, we went back to the coast road and took it in the opposite direction, following the track along the edge of the island, with the beach on our left and jungle on our right, hoping to find the quicksand lake with its flock of indigenous gray ducks. As we walked, we kept peering through the trees, looking for the lake, but as before, all we saw were more trees.

Finally, through a break in the trees, we spotted water. The quicksand lake! A dirt path led through the trees to the lake's shore. And there were the indigenous gray ducks, floating serenely, near the shore. We walked slowly and quietly toward the lake, so as not to disturb them. When we were close, I stopped and looked through my binoculars...and immediately saw that something was not quite right. Though the ducks were floating, they weren't moving their bodies; one of them was listing heavily to starboard, its beak submerged. "Hey!" I said to Eric. "These aren't live ducks; they're decoys!" I gave the binocs to Eric, who confirmed the ruse. Had Warren known they were decoys, and been kidding us when he told us to look for the ducks? We'd make sure to ask him when we next saw him. (Update: he was as surprised as we were, to discover that the ducks were decoys. He didn't know who had put them there, or whether they were intended to attract the actual, live gray ducks to the lake.)

Feeling cheated, and a little disappointed, we wandered back out to the coast track and followed it to a beautiful little cove, where clear water gently lapped the white sandy beach, quite a contrast with Ma'ama'a Cove, just around the corner. 
We cooled our feet in the water, then continued following the track, which began to climb the hill...

...and yes, eventually emerged into the clearing at the top of the hill, where we met up with the radio tower for the third time. We'd arrived from the trail on the left, which, it turned out, had been the shorter trail to the quicksand lake. Oh well.

A couple of young hikers were resting in the shade. They asked us if we knew where a good swimming beach was. Having spent the past six hours wandering the island's trails, we felt qualified to give them directions: "Take the trail to the left," we told them.

Then we followed the road back down past the radio tower, back across the taro swamp, back through the houses and the town, and back to the store, where we bought another couple of cold drinks that we drank while again relaxing on the shady porch. Ready to return to the "mainland" of Tutuila Island, we headed back to the ferry harbor. We boarded the ferry with a man and woman, who, we learned during the mile-long boat ride, were the principal and assistant principal of tiny Aunu'u Elementary School. We were amused that in addition to heading the school, they each also taught a class.

When we got off the ferry, they offered us a ride back to town in their truck. We accepted and enjoyed a most interesting conversation about American Samoa's education system and politics, and what it was like to grow up in American Samoa.