Last Monday, Oct. 24, we finally pulled our anchor up from the bottom of Pago Pago Harbor. After holding us so well for the past six weeks, we were afraid it had been snagged on a submerged jeep or something similar, and might not come up easily. Though much of the chain sported a vibrant, fuzzy, aquatic ecosystem, complete with thousands of tiny crabs who'd been calling it home for some time, the anchor came up without a hitch and was completely clean. No trash, no diapers, no ropes, not even any mud. Go figure.

After a pleasant and comfortable (yay!) overnight sail to Western Samoa, we arrived in Apia Harbor, taking a slip in the tiny marina.

Knowing that we were only going to stay about a week, we decided to hit some of the highlights of the main island of Upolu. On Saturday, we took a full-day trip around the eastern half of the island with a taxi driver named Tuki. 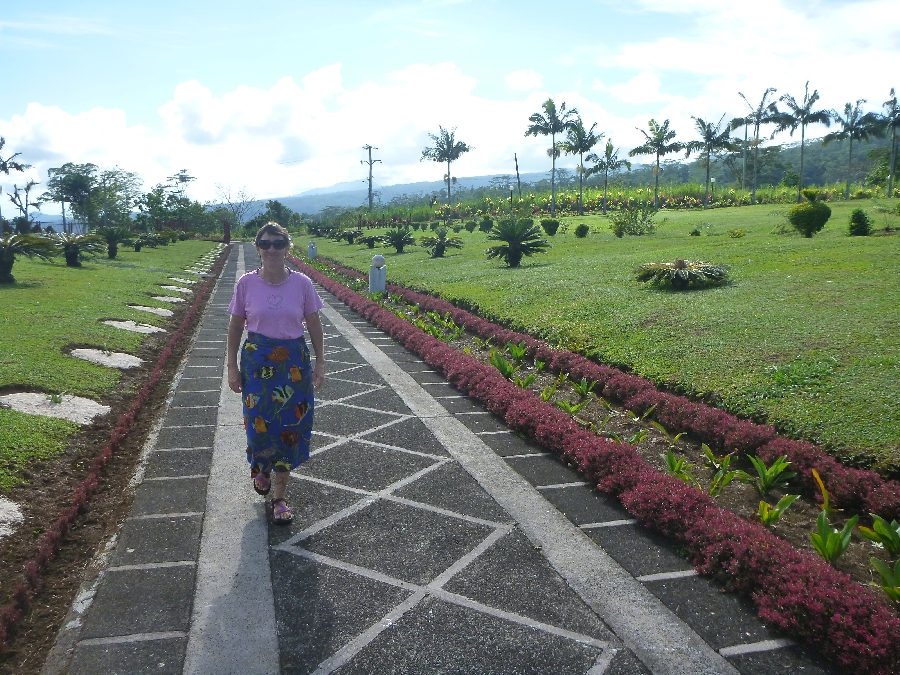 Van wearing a pareo over her shorts, required for modesty on church grounds 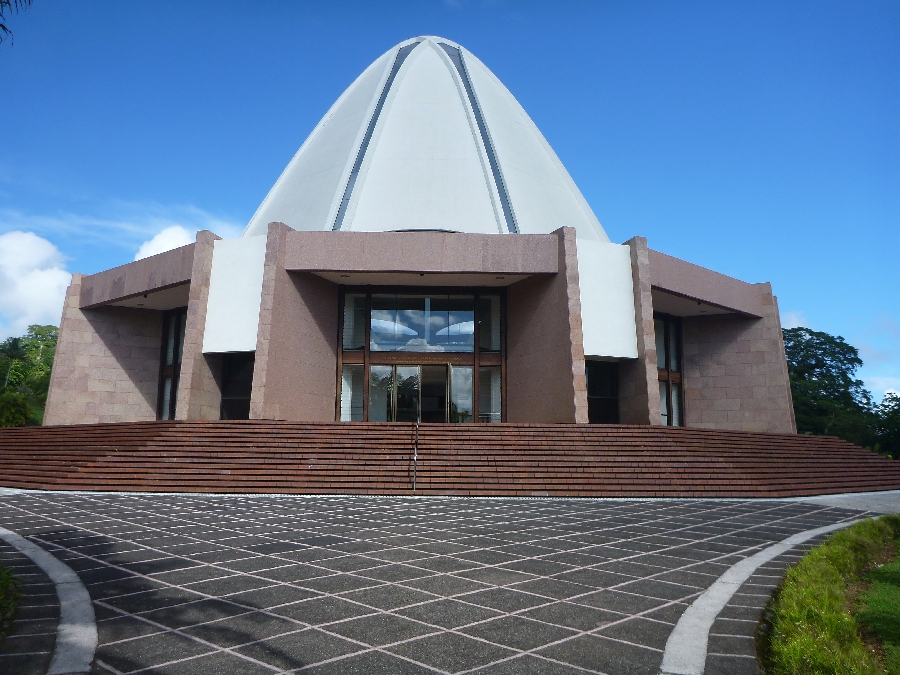 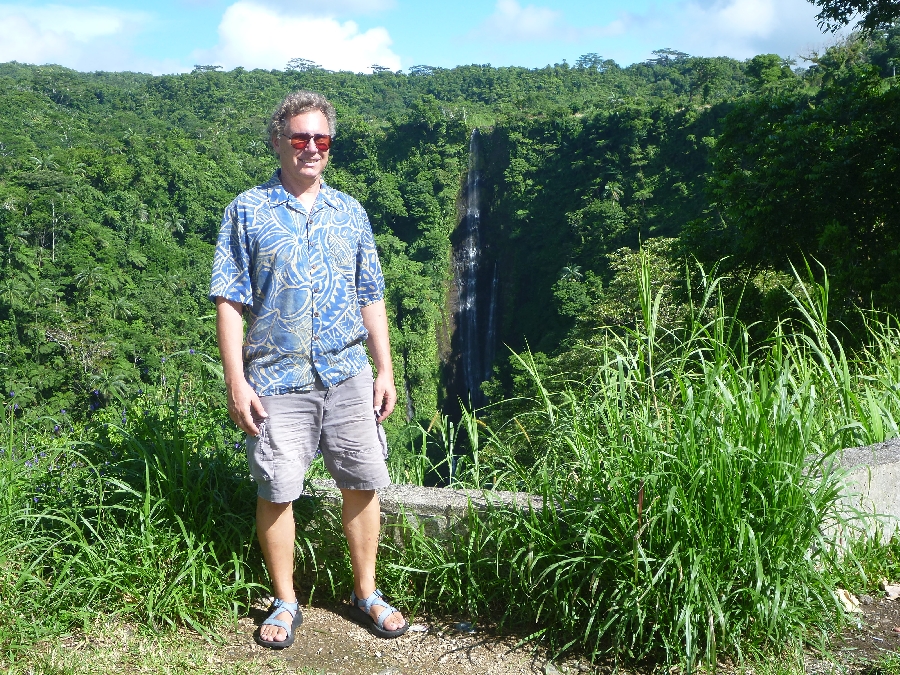 Eric in front of the falls. 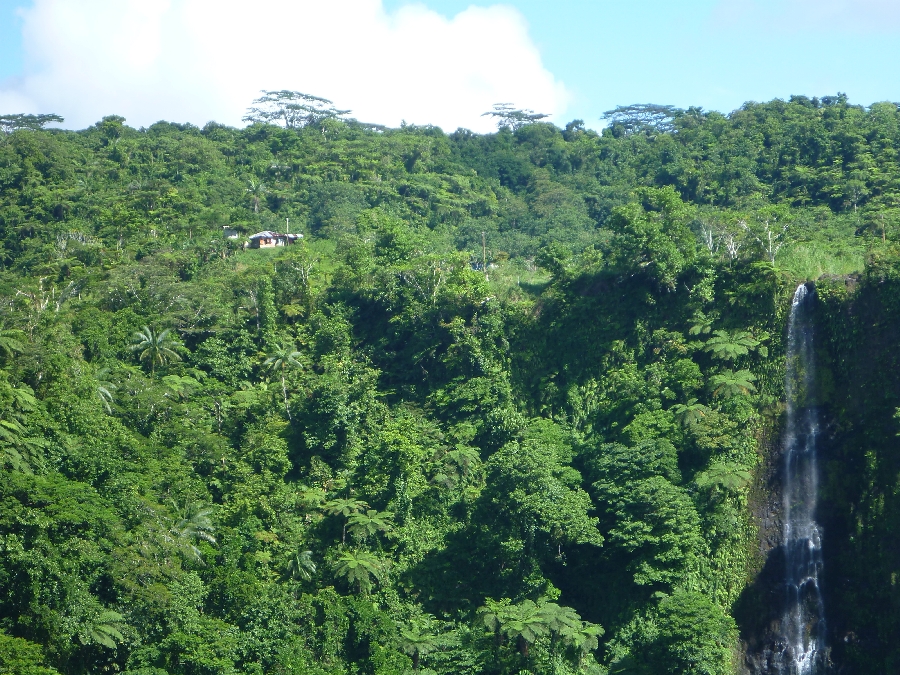 Can you see the little house perched on the cliff? Kelly and Nick, does it remind you of a particular movie? 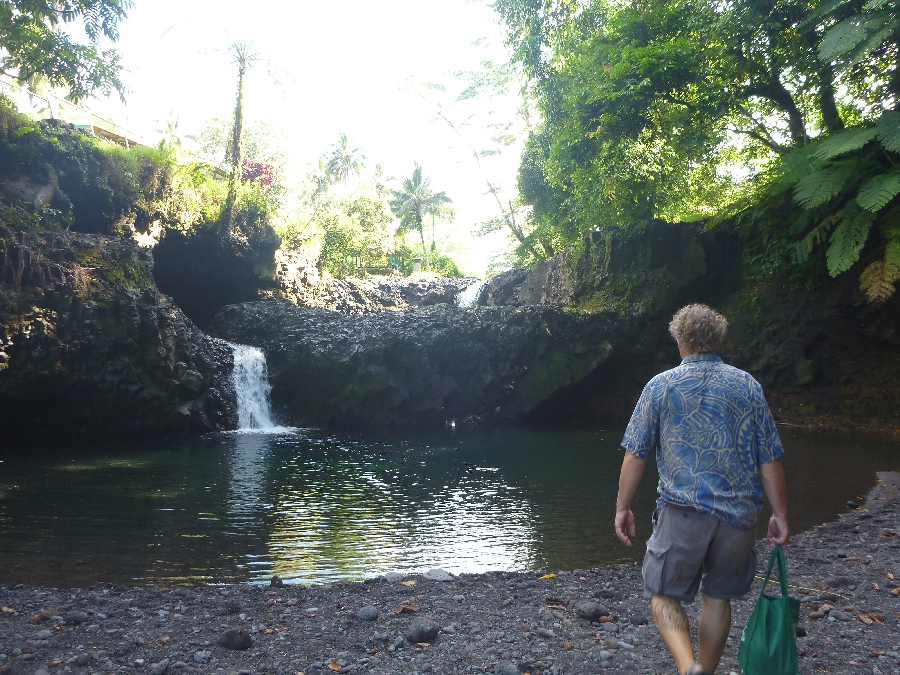 Much smaller than Papapapai-tai Falls, and you can swim there, too, though we didn't.

...Saletoga Sand Beach Resort, where I scooped up some Samoan sand for my sand collection... 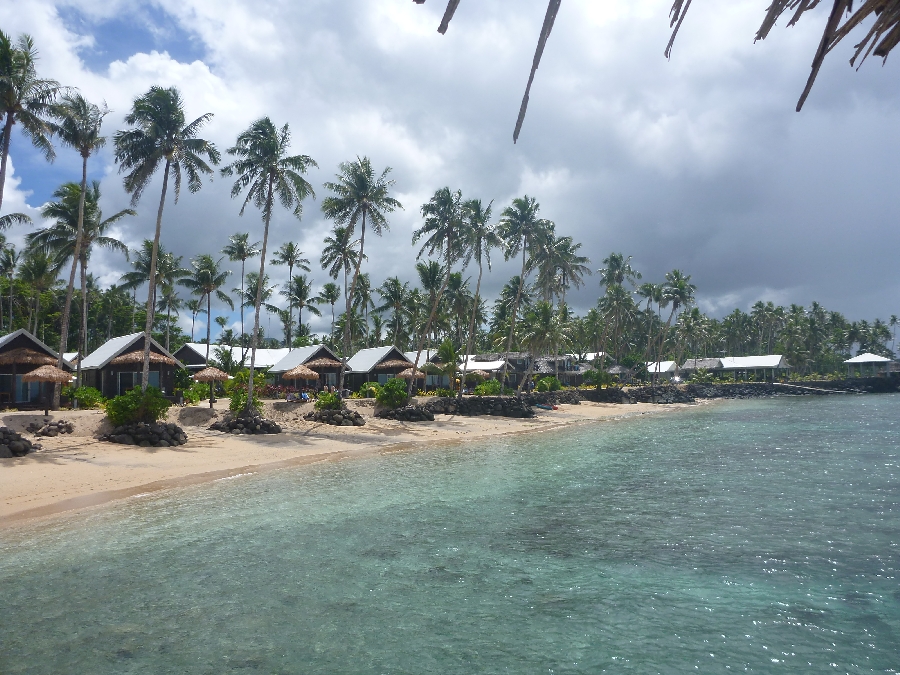 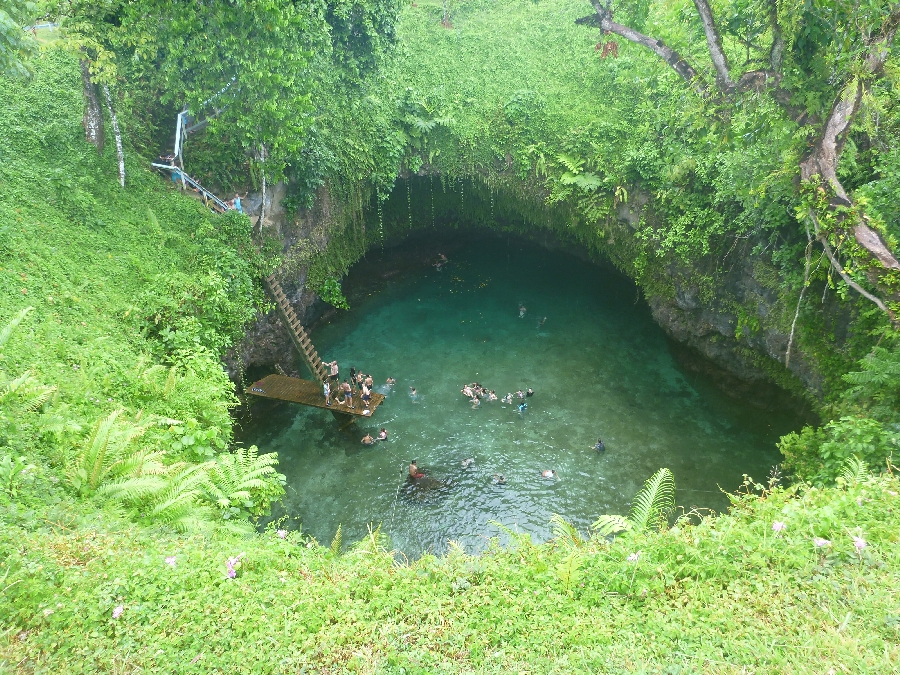 How you get in and out of the trench 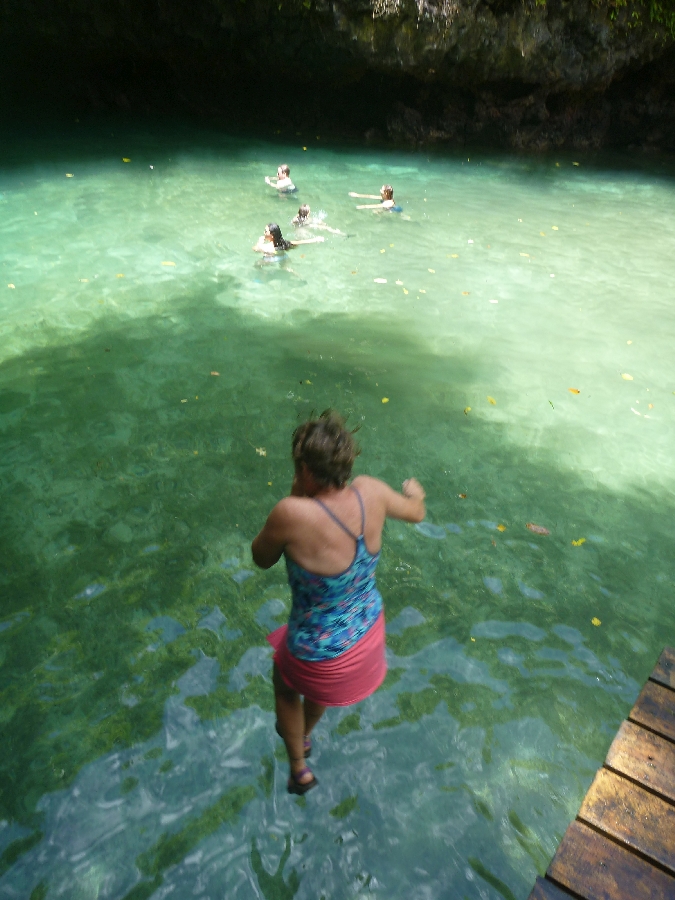 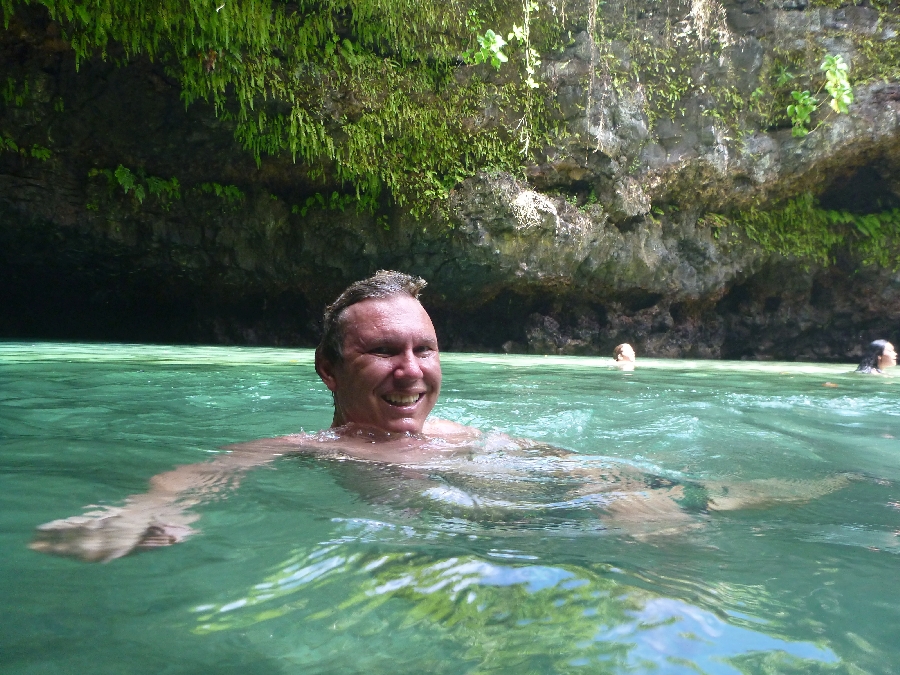 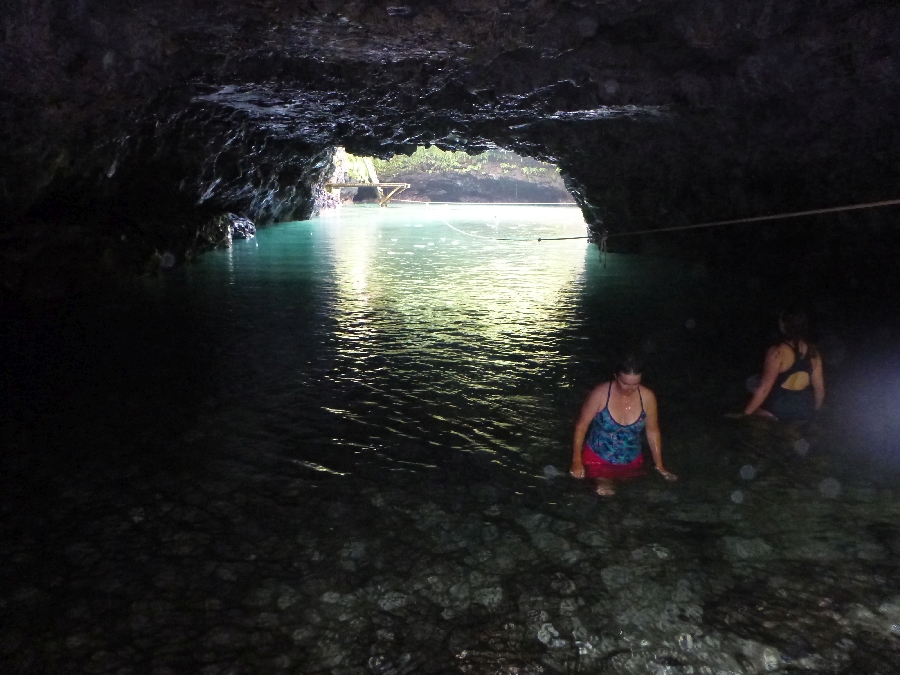 The cave on the other side of the trench 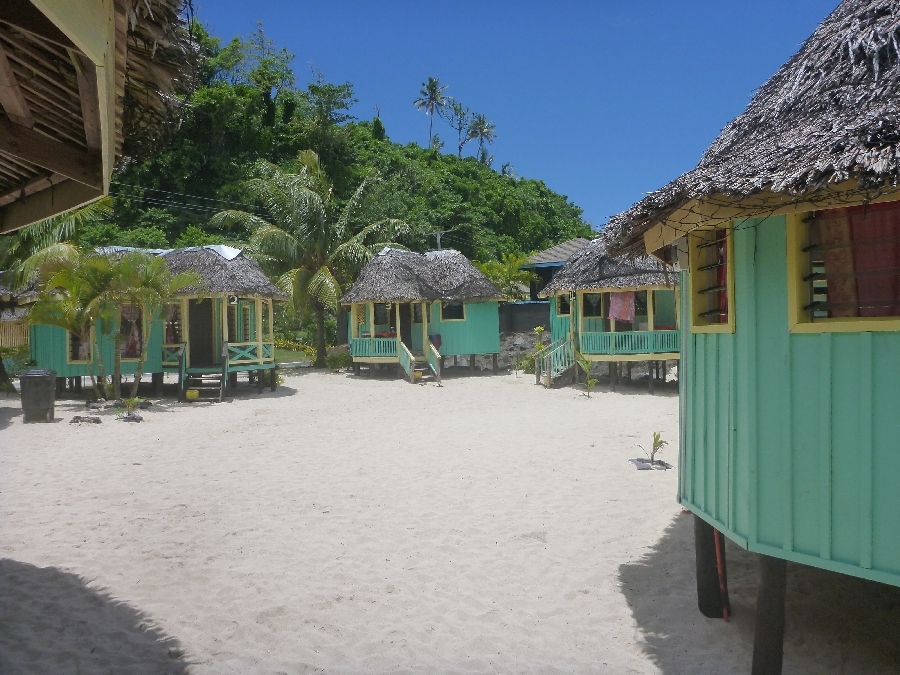 The fales (traditional Samoan shelters, usually without walls) have a different vibe than the bungalows at the Saletoga Sands resort. 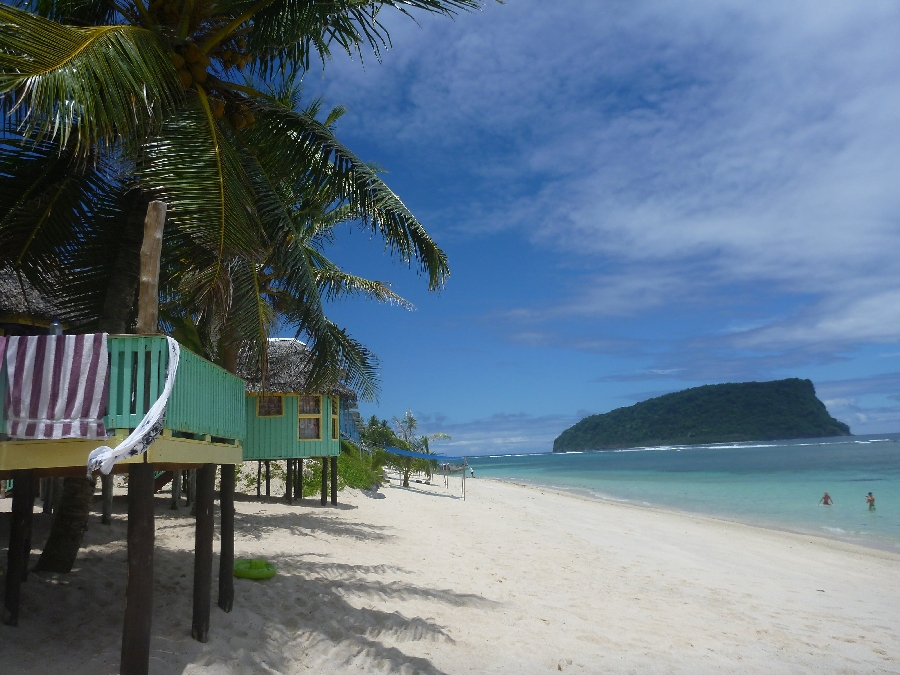 Both beaches are gorgeous.

...and over the green mountains back to the north side of the island, to Apia Harbor. 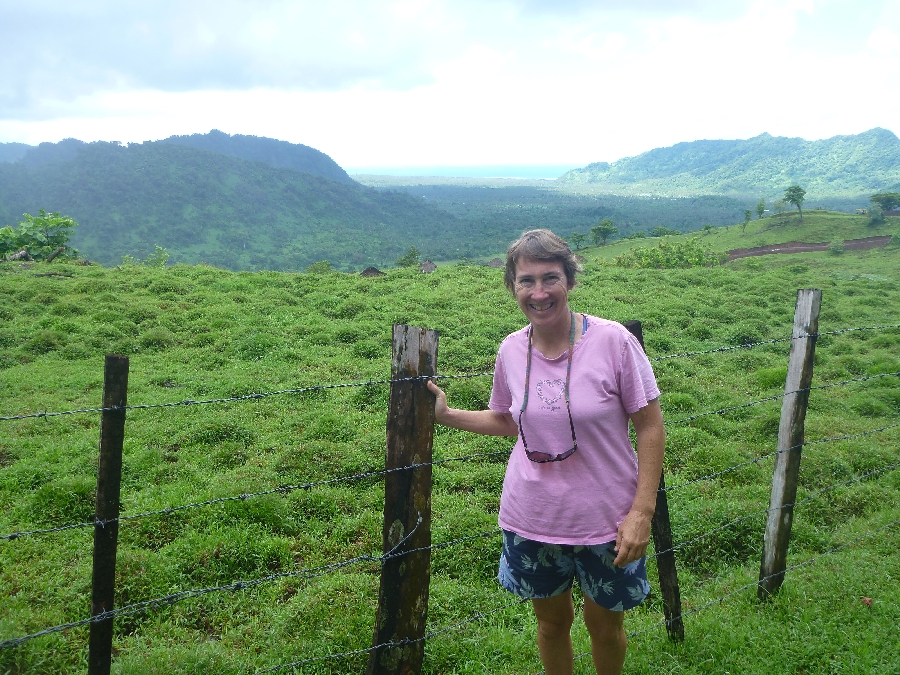 Did you know that Robert Louise Stevenson lived in Samoa from 1890 until his death in 1894? He bought some land on top of a hill in the village of Vailima and built a house there, which he called Vailima. The house and grounds are now a museum. We took a tour on rainy day. It was so fun to imagine the author and his family living and moving around in the beautiful, airy house. He was beloved by the Samoans, who called him "Tusitala" or "teller of tales." 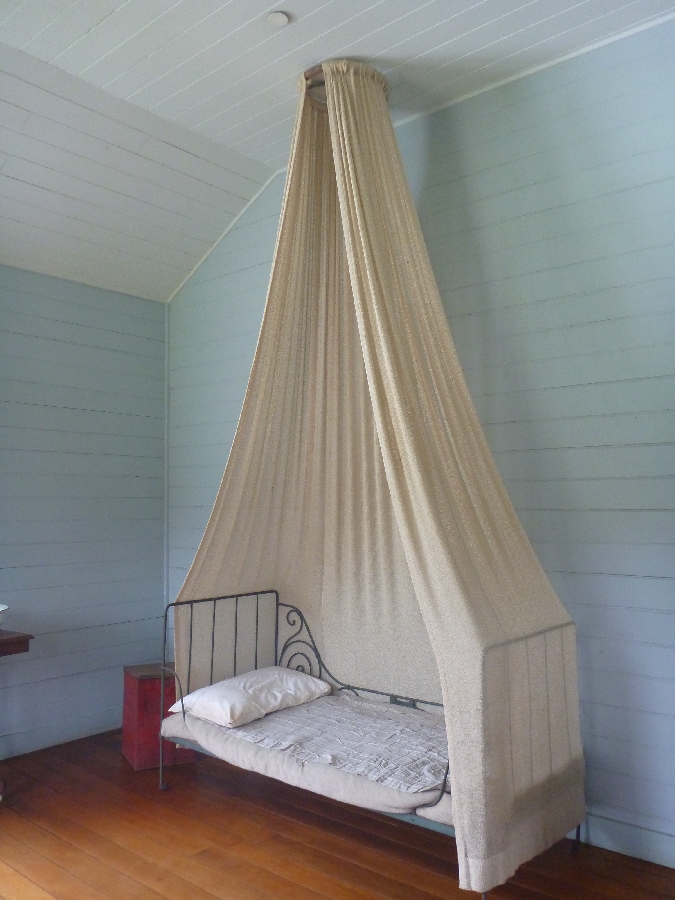 The bed in the "hospital" room of the house, where Robert's wife, Fanny, a nurse, ministered to him. Seeing the bed reminded me of the first poem I read by Stevenson, "The Land of Counterpane." 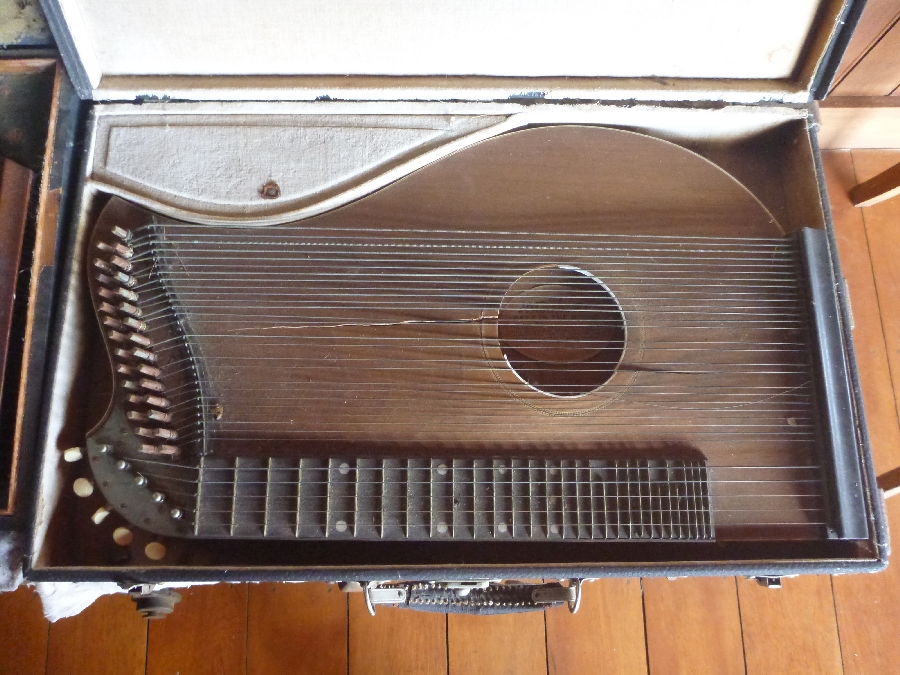 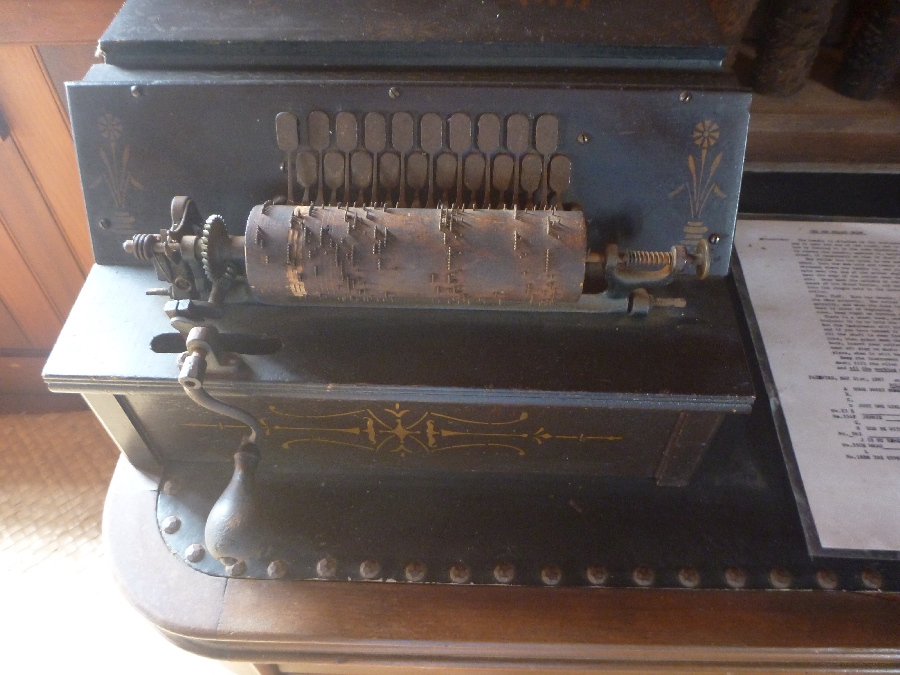 Two of the musical instruments in the house 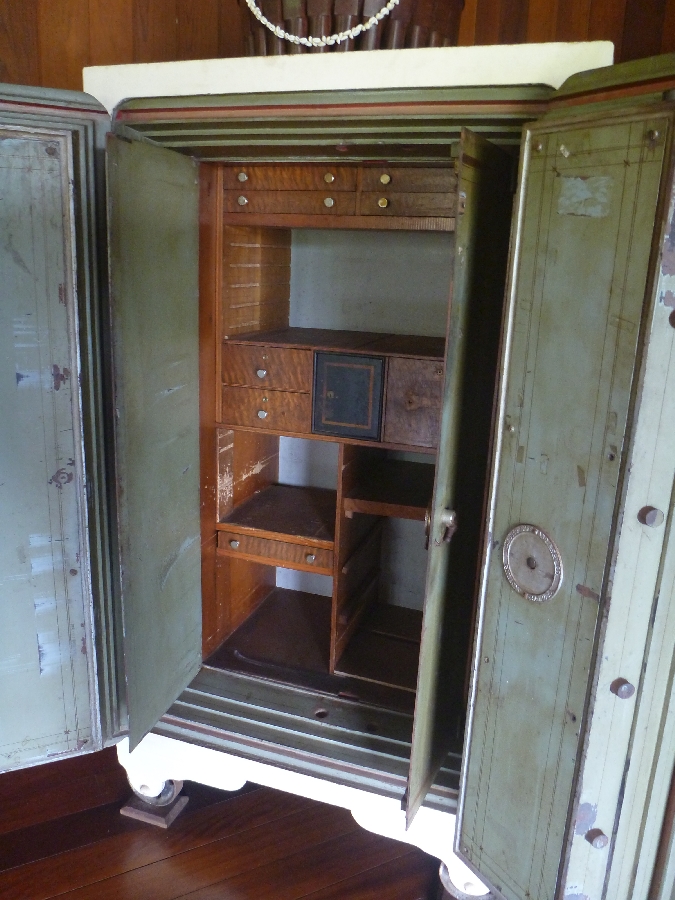 The safe where Stevenson kept his original manuscripts (and his money, too).

On another day, we visited the Samoan museum, which housed photos and artifacts from Samoan history. It was an interesting (and air conditioned) place to explore. 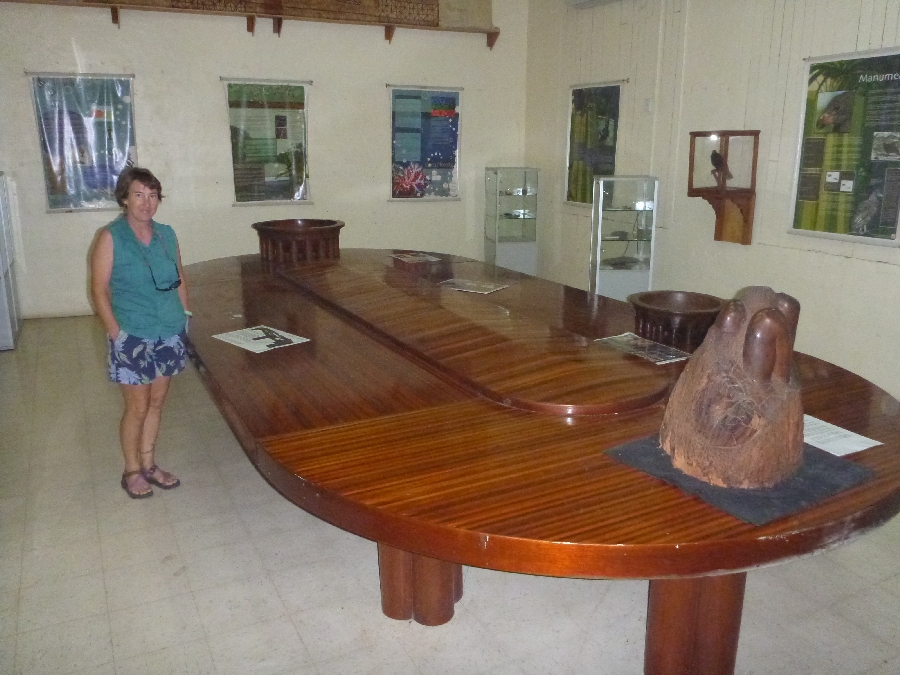 This huge council table was so heavy that it had to be cut into 8 pieces - each carried by 8 Samoan men - when it had to be moved.

Another day we went to the flea market, in search of a slot drum ("pate" - pronounced "pah-tay") for me. I'd been drumless since moving aboard SCOOTS, but I hadn't seen any drums that interested me. Until we attended the Heiva Festival in Tahiti last July. There, the percussionists produced some amazing rhythms to accompany the dancers, playing some interesting drums, including slot drums, which I'd never seen before. I really liked the sounds they made, and the fact that they were played with conical wooden sticks, rather than with hands. It took a few months, but I eventually admitted that I'd really like to have one.

In the flea market, we stopped at the first stall that had a couple of slot drums for sale. I asked if I could play one. The seller found a couple of sticks for me, and I played it. Then I played the other one that he was selling. I thanked him and moved on to the next stall selling slot drums, and asked if I could play theirs. I think they were at first amused, and then surprised, when they discovered that the small palagi woman actually knew how to play a few licks.

After I'd done this a couple of times, when I stopped playing, I could hear slot drums being played all over the market, by sellers letting me know they had some drums to sell. Everyone laughed. It was fun.

Eventually, I saw a medium-sized drum lying on an unattended seller's table. I walked over to it and picked it up. Soon the Samoan man whose stall it was came over and we struck up a conversation about this drum, drumming in general, and Polynesian dancing. He'd been a drummer for a Polynesian dance group, he said, and had traveled all over the Pacific and the US. He produced a pair of beautiful sticks, and allowed me to play the slot drum. It had a nice sound. Then I asked if he would play, and he did.

He played some fast Polynesian rhythms that soon had some of the other sellers peeking around corners to watch and listen. He was really good! Then he gave me some pointers on how to hold the sticks and play the different parts of the slot drum to get different sounds.

I bought his drum and sticks and am no longer drumless. Yay! 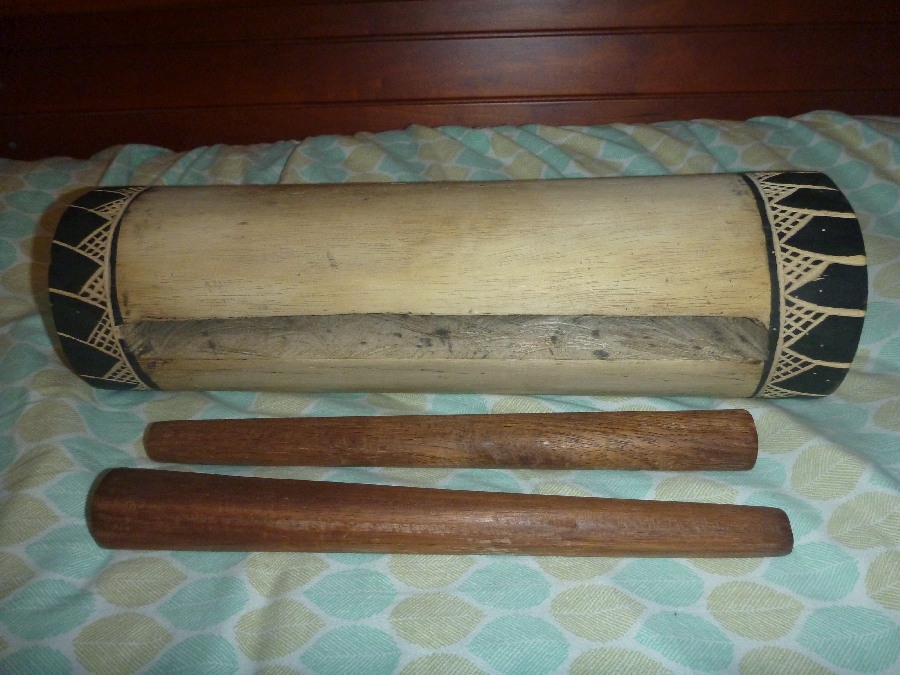 On our half-island tour, Tuki, our taxi driver, had mentioned that he was also a fire dancer, who performed in a fire dance ("siva afi") show every Tuesday night, at a restaurant right across from the marina. Cool! So of course we went on the next Tuesday night and had a great time!

The show consisted of frenetic fire dancing routines by men and boys, alternating with slow, demure dancing by women. It was really entertaining.

I've added a Link with a video I made, called Samoan Fire Dancing, showing some elements of the show. It's not a great video, but it'll give you a better idea of what it was like, than still photos can. Look for it in the Links section of the right-hand sidebar. 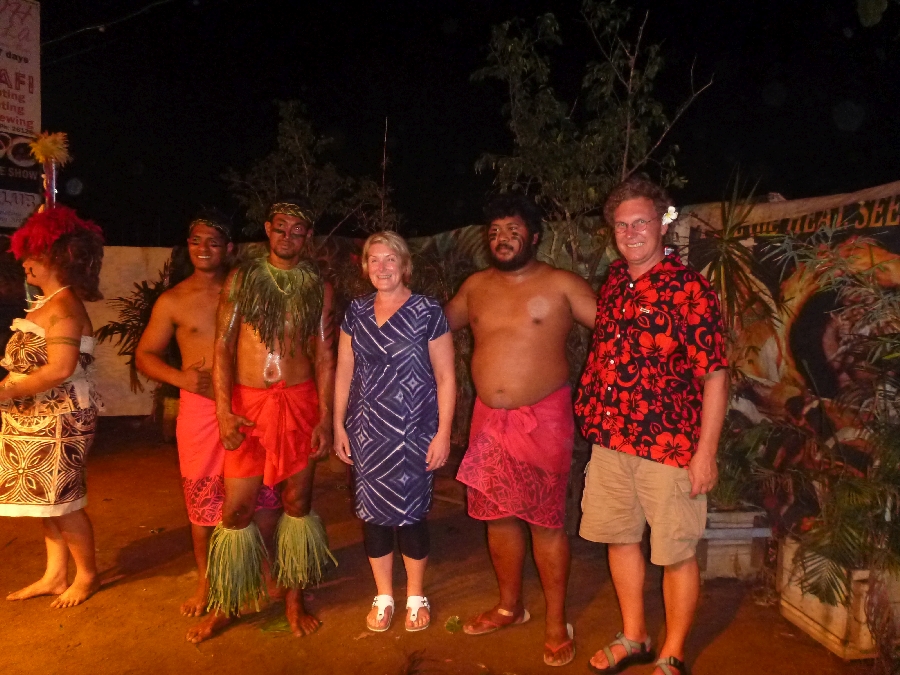 Here is a photo of Eric with Tuki (next to him) and some other people after the show.

We visited the famous Aggie Grey's hotel, where I had an actual umbrella drink. Believe it or not, we very rarely have umbrellas in our drinks. Van and her umbrella And another day, Eric tried "the best eggs benedict in Samoa."

On the Sunday before we left Western Samoa, Eric and I wandered about a quarter mile down the road to the Palolo Deep Marine Reserve, a quiet, shady park with some great snorkeling just off the beach. We enjoyed hanging out in our "microfale" ("fale," pronounced "fah-lay," is a roofed enclosure with open sides). Regular fales, seen in most villages, can shelter more than a hundred people, and swimming in the shallow coral and the large, deep hole further out. The view of the beach