Relocating
After ten wonderful days in Opua, we pulled up our anchor and began heading leisurely toward Whangarei, about 75 miles south down the coast, where SCOOTS would have a much-deserved rest.

The first day, we had a nice sail to Paradise Bay on Urupukapuka Island, in the Bay of Islands, a lovely cove with a white sand beach, and clear water. I was surprised to encounter clear water, after Opua's estuarine murk, but there was the sandy bottom, twenty feet down. By the way, you should say Urupukapuka out loud, it's kind of fun. Uru-puka-puka. My Maori place name book tells me that this means "a grove of pukapuka (trees)." 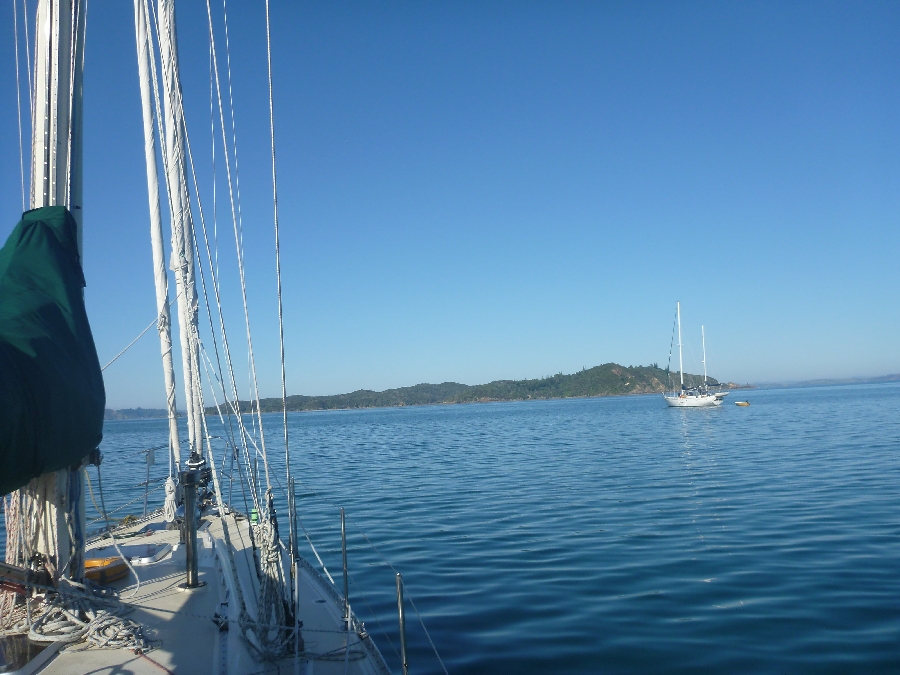 We took the dinghy to that white sand beach and followed a well-marked trail up into the bush (forest). 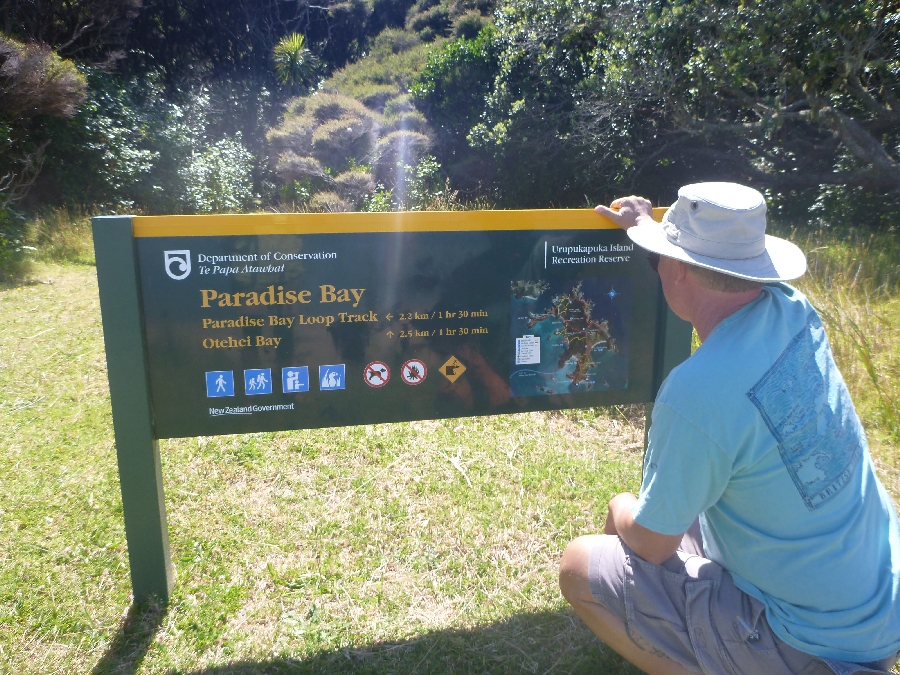 The NZ Department of Conservation (DOC) does a marvelous job of creating and maintaining trails. I was in bliss - hiking in a forest again, and with all those birds flitting around and singing! 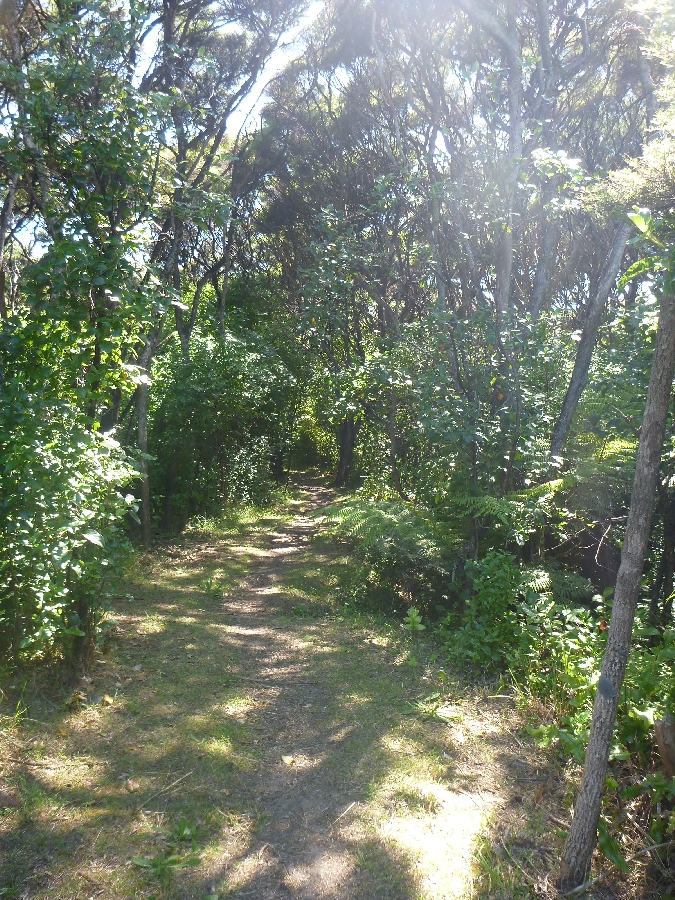 Our daughter, Kelly, informs us that New Zealand has no native land mammals, except for a few species of bats. Rats, stoats, ferrets, possums and different kinds of farm animals have been introduced - some on purpose, others accidentally. The DOC has an ongoing and active program to eradicate non-native mammals...except for the ones that taste good, Eric was quick to point out. On our way up the trail, we met a couple of Brits who were coming down, friendly folk who were traveling around NZ on holiday in an RV. We stopped to chat for a little while. They told us about a nice cafe in the next bay over, The cafe in the next bay

...and warned us about a minefield of sheep droppings in the grass at the top of the hill; we told them about the lovely beach at the end of the trail, and described SCOOTS so they could identify her among the anchored boats. Continuing up the trail, we eventually emerged onto a grassy hilltop, which sported a spectacular view of the island and its many coves, and, yes, many piles of sheep droppings. 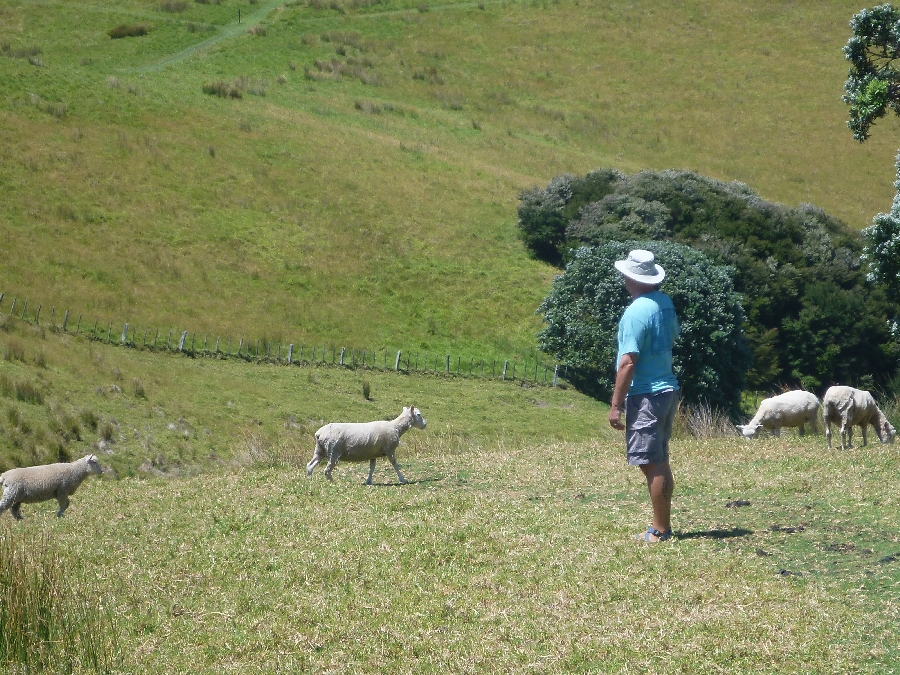 Eric with some of the tasty introduced mammals

Stepping carefully, we wandered down the hill until we came to the cove with its cafe and picnic tables, where we ordered lunch and sat down at one of the beachside picnic tables to enjoy the sunshine and warmish weather. Some people - crazy,misguided people, obviously - were swimming. Not us. 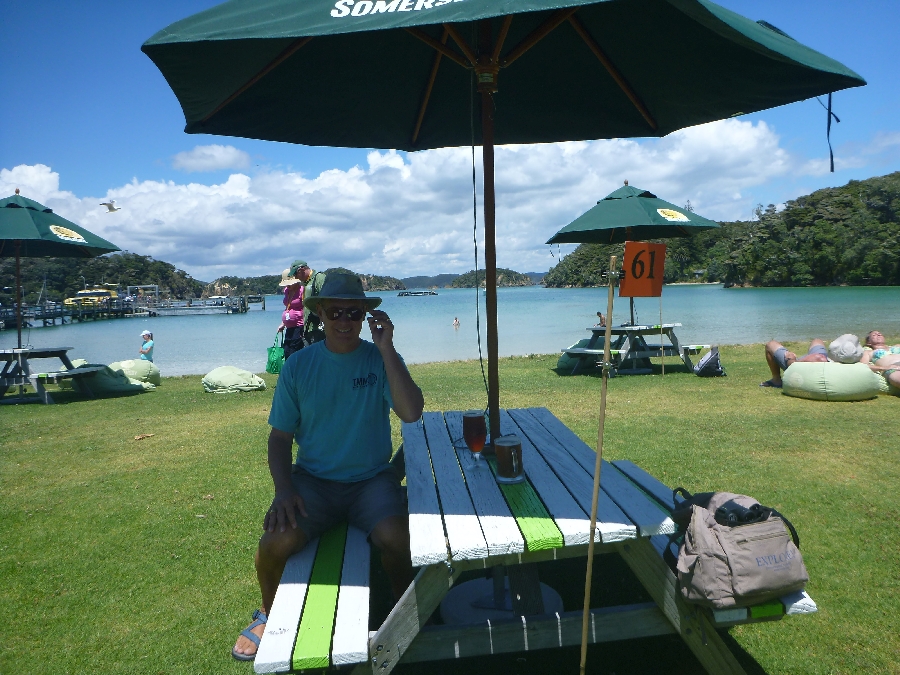 A nice spot for lunch

A few minutes later, we were delighted to see our new British friends coming down to the beach. We invited them to share our picnic table - which they did - and we were able to continue our conversation for another hour, until they boarded a boat back to Russell, where their RV was parked.

We enjoyed a quiet night in the calm anchorage, with a short burst of entertainment provided by
an argument and fistfight that broke out between two drunken young "bros" (that's what they were calling each other) on a sailboat anchored nearby. This ended when one bro ordered the other off the boat, and the other bro climbed into the dinghy and rowed away, complaining loudly into his cell phone about the treatment he'd received from his "bro" on the boat, and lamenting how he was now afloat in the middle of the ocean. Not quite. He eventually disappeared around the bend toward the next cove over, with the beach cafe.

The next day, we sailed south in the bright sunshine, out of the Bay of Islands, and down the Northland coast. 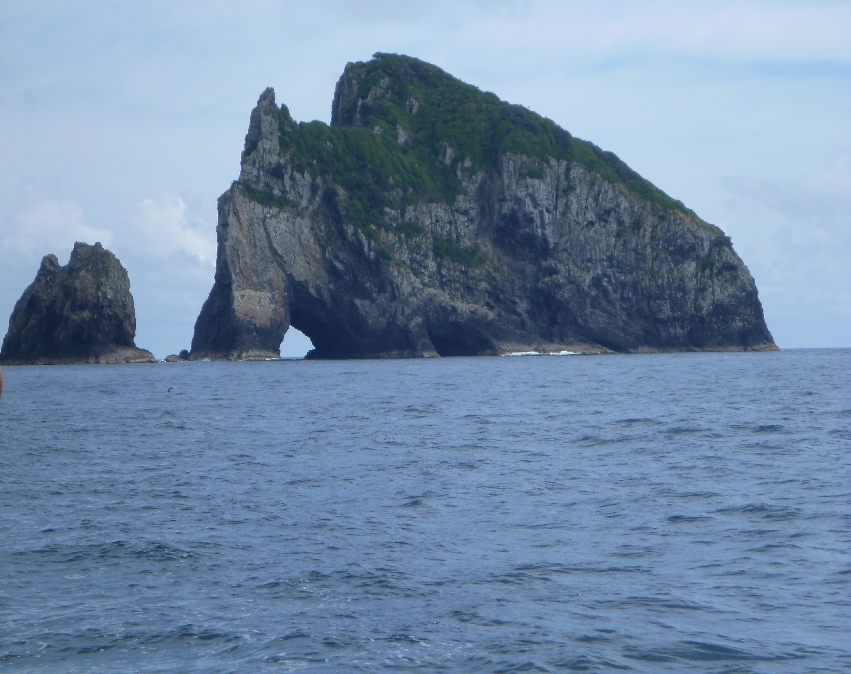 The famous - and aptly named - Hole in the Rock

As usual, we saw no marine mammals - in fact, since leaving Mexico, where sealife of all kinds abounds, we've seen exactly two whales, very few dolphins, and no pinnipeds. To be fair, we're pretty late in the season to see whales in these parts; some of our cruising friends saw plenty a couple of months ago. 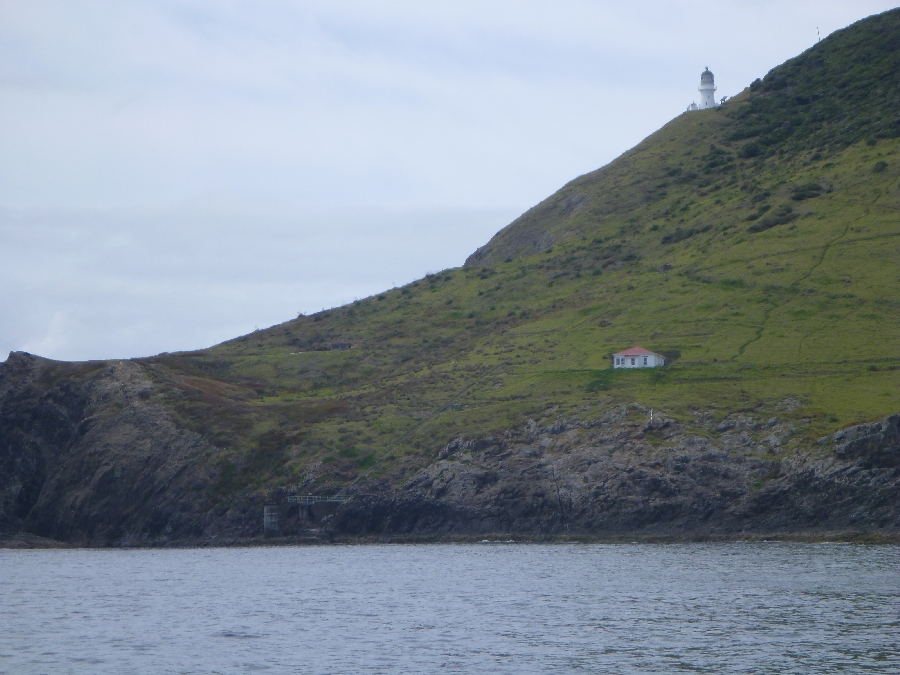 But oh, the multitudes of seabirds! It's so nice to be in a place with coastal birds like gulls and cormorants and terns again, in addition to the pelagic species. For the two days that we sailed south towards Whangarei, I was kept very busy with binoculars and a bird app, trying to follow the flights of the zooming, zipping shearwaters and petrels closely enough to determine what kinds they were. Does that one have gray thighs or white thighs? A speckled chest or streaks? A dark line over its eye or through its eye? Black legs with yellow webs or black webs? I eventually stopped looking for plumage details and just watched them fly, charmed and amazed by their athletic abilities. Differences in their flight patterns and other behaviors, it turned out, was a reasonable way to distinguish among some pelagic seabirds...as a group, shearwaters and petrels skim swiftly over the waves on long, pointed wings, like fighter jets, tipping to the right or left to create graceful arcs; diving petrels - resembling fat, gray and white potatoes with stubby wings - prefer to dive out of the way of our boat, rather than fly, but when they do fly, they flap like hell, barely keeping above the water, their wings a blur and their legs trailing out behind them; storm petrels fly more slowly, buoyantly, dangling their legs beneath them, lightly skipping and dancing across the surface of the water.

We tucked into Whangaruru Harbour (according to my Maori place name book, Whangaruru means "sheltered harbour") late in the afternoon, where we spent a quiet night. 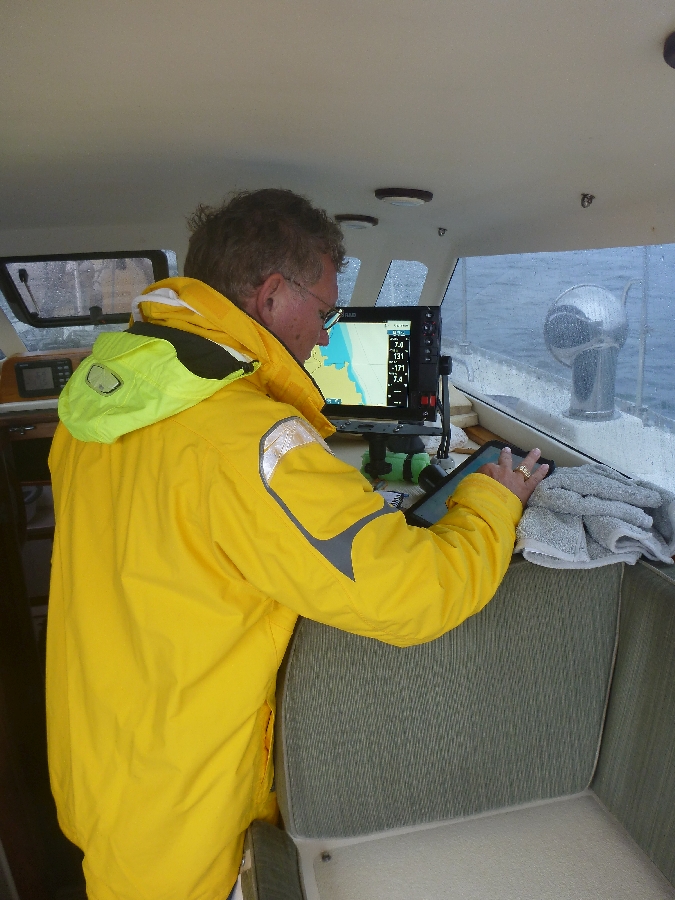 Though we woke to gray skies and drizzle, and expected a rainy, windy day, in fact it was only windy, which provided us with a lovely downwind sail, SCOOTS propelled by her two jibs, one open to either side. Bundled up, wearing my new hat that Sarah knitted for me. :)

We entered the outer reaches of Whangarei Harbour in mid-afternoon, and put SCOOTS' anchor down in Urquharts Bay, a large cove just inside the harbor. The next morning, we began the 13-mile trek up the Hatea River, to the Whangarei Marina. This would be a carefully-timed, carefully-steered drive up the channel - remembering to keep green (not red) markers to starboard on returning from the sea, here in the Southern Hemisphere. It was carefully-steered because thick mud lurked outside of the channel markers. It was carefully-timed to meet three conditions: (1) we had to arrive at the narrowest, shallowest portion of the channel during the second half of the rising tide - after 2:30 pm on this date - so there would be enough water under SCOOTS to keep her afloat (no kidding); (2) we had to be at a drawbridge along the way before 4 pm, after which they wouldn't open due to rush hour car traffic; (3) and we had to arrive at the marina, a little ways beyond the bridge, before their 4:30 pm closing time. After doing some calculations, we determined that we'd need to leave Urquharts at about 12:30pm, and keep our average speed at 5.5 knots. This should be easy, as it's quite a bit slower than SCOOTS' cruising speed. In fact, we had to keep SCOOTS throttled back even more, to counteract the current of the incoming tide, which boosted her speed by an extra 2 knots. Everything went as planned: we arrived at the skinny water at 2:35 pm, called the bridge and went through it at 3:15 pm, and arrived at the crowded marina at 3:30 pm. Eric, who was driving, had to slip SCOOTS into not just one but two tight spaces within the first hour of our arrival, both of which he carried out expertly. SCOOTS is now rafted up beside another boat, tucked in between two other boats fore and aft, along the dock in the long approach waterway to the marina. She'll be here for awhile.

Readjusting
After filling every available nook, cranny, cabinet, under-floor space, cupboard, secret hidey-hole, locker, shelf, box, and bin with enough provisions to gird us against the trip across the Pacific to the Marquesas, the breathtakingly expensive food of French Polynesia, the dearth of food on some remote islands and the bland or downright unhealthful food on others, the intervening months and miles of voyaging, and any other events that might require eating between Mexico and New Zealand during the intervening eight months...we now have a supermarket right across the street.

After months of paying close attention to our supplies (running out of TP halfway across the Pacific would not be good, for example) and making due or being creative with what we did have, it'll be a bit of an adjustment, to buy just enough stuff to get us through the next few days, or a week at the most. And if we forget something, it's no big deal...we can just walk back across the street to the store.

This will take some getting used to.

We can "stand down" now, from detailed, daily weather watching and prognosticating. Tied up securely in a marina, in a place that rarely receives cyclones, SCOOTS won't be bothered by the weather that's likely to come her way. Oh sure, we always keep a weather eye, and prepare for wind or rain, but it isn't quite as critical as when we're underway our anchored out.

And then there's the language barrier. Okay, so maybe it's more like a speed bump than a barrier, or better yet, a slight detour, because the fact is, even though New Zealanders speak something akin to English, it's different from the English that we speak in the States. In some ways, having a conversation with a Kiwi is trickier than conversing (or attempting to converse) with someone who's speaking French or Spanish, because at least then you know you're dealing with a completely different language. Here, everyone claims we're all speaking the same language, and that language is English. But we're not. Not exactly.

Sure, there's the Kiwi accent to contend with, but Kiwis also use words in different ways than we do. (For instance, you don't want to casually use the word "root" here...it means something very different, here in NZ, than it does in the States.) I want to do a big shout out to our cruising friend, Debbie, from s/v Impulsive, who sent us lists of Kiwispeak while we were on our way here from Tonga, so we could get a jump on the language. Thank you Debbie! Good on ya, mate!

Relaxing...
After putting so many miles under SCOOTS' keel this year, we're planning to spend the next few months exploring New Zealand - mostly by car but maybe with some sailing, too - and giving SCOOTS and ourselves some well-deserved TLC.

This will be our final blog post for 2016. We'll return in 2017 with tales of our explorations in New Zealand, and beyond. Thanks for reading along. It's fun to have you with us. Merry Christmas and a very Happy New Year!