This past weekend, Eric and I attended a kiwi release! It was a wonderful opportunity to get up close to some of these amazing birds and learn some fun facts about them, which I'll be sharing with you. One of the cool things about this, is that, until very recently, I never had any inclination that I would ever have an opportunity to see a wild kiwi – or live in New Zealand – and yet, here we are. 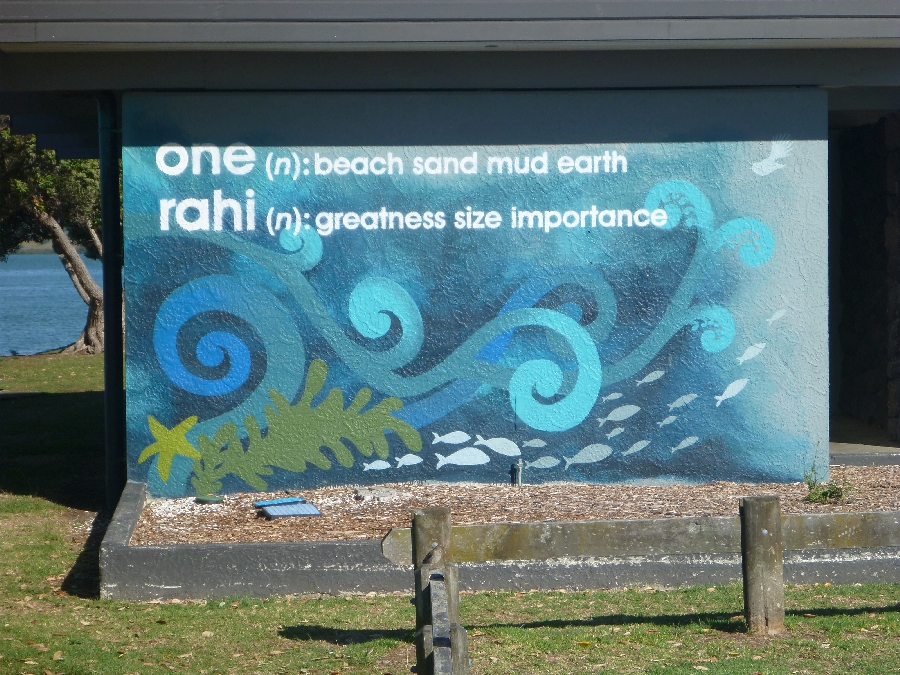 We arrived at the Onerahi Yacht Club boat ramp, a few miles east of the Whangarei Town Basin Marina, at 10:30, just as the small boat ferrying three adolescent kiwis from Limestone Island arrived. 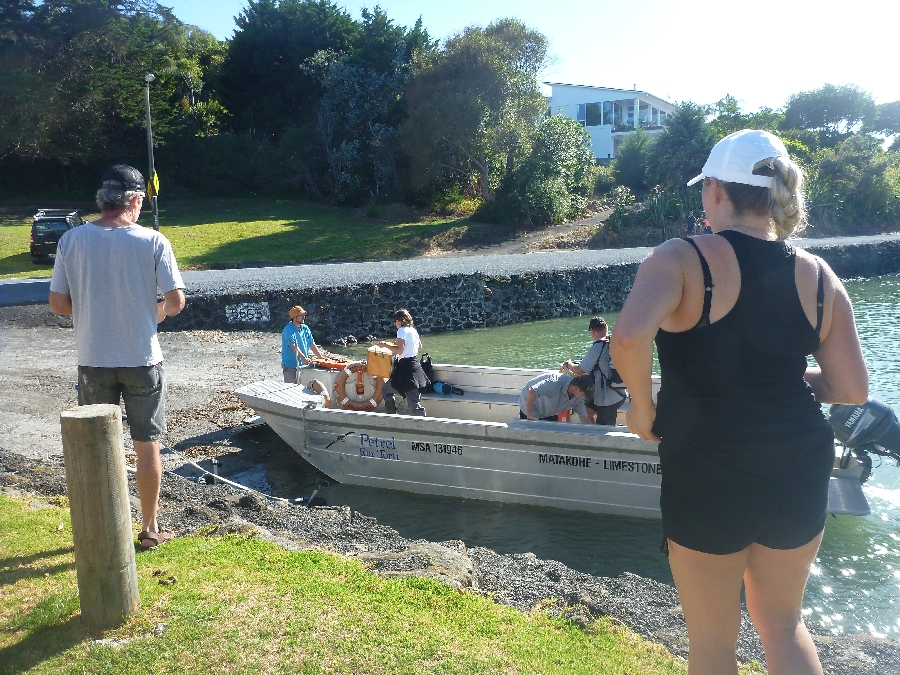 As part of Operation Nest Egg, these kiwis had been brought to predator-free Limestone Island when they were very young. They had spent a couple of years growing up there, completely wild. Now it was time for them to return to the mainland.

When kiwis evolved in New Zealand, which lacks native mammals, they had no natural predators. And so, when humans and other non-native mammals arrived, kiwi populations were severely reduced by predation by domestic dogs, stoats, rats, and habitat depletion. Now, groups such as Backyard Kiwi and Kiwis for Kiwi administer programs that provide public education, carry out non-native mammal eradication, protect kiwi habitat, and administer hands-on kiwi husbandry projects, such as Operation Nest Egg.

Fun Fact (NOT a particularly fun fact for female kiwis): female kiwis carry one egg at a time, which weighs 20% of her body mass. Just think about it...this would be like a 120-lb. human woman giving birth to a 24-lb. baby! Oy. 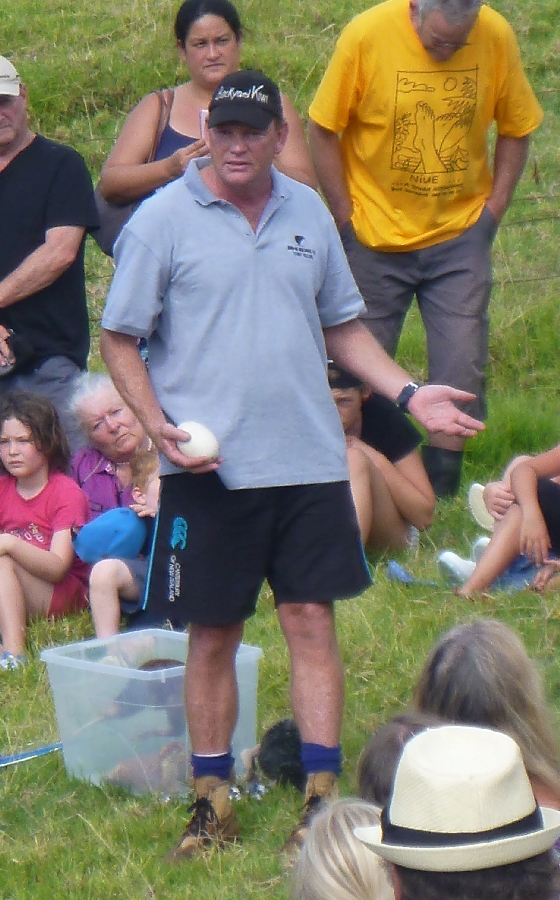 This is Todd, from Backyard Kiwis, holding a model of a kiwi egg. That's a big egg for a chicken-sized bird!

After the female lays an egg in a burrow (she may lay up to two per year), it's her mate's job to incubate the egg for the next 70-80 days. When kiwi chicks hatch, they look like miniature adults and are completely independent of their parents.

Fun Fact: Kiwi hatchlings carry around an external yolk sac for about ten days, which they absorb while they learn how to fend for themselves.

From time to time, volunteers visit Limestone Island to find and collect adolescent kiwis that have reached a weight of 1200 grams. At this size (think small chicken), they are large enough to repel a stoat or rat, and are transported back to the mainland to be released. That's what Eric and I were lucky enough to be witnessing.

Some more Fun Facts about kiwis:
...Kiwis are the only birds with nostrils at the end of their bill. As they probe around in leaves and dirt with their bill, they use their sense of smell – as well as detecting vibrations – to find their prey.
...Kiwis have vestigial wings and are the only bird without a tail. Their legs, however, are very strong. Look at those big feet!

...Unlike most birds, who have hollow bones, kiwi bones contain marrow.
...Kiwis mate for life and can live up to 60 years.

The morning portion of the program began with a Maori blessing of the kiwis and the telling of a Maori story of how the kiwis came to live on the forest floor. Being acquainted with many"why it is" stories from Native American indigenous peoples' traditions, I enjoyed hearing one of these stories from another indigenous population. 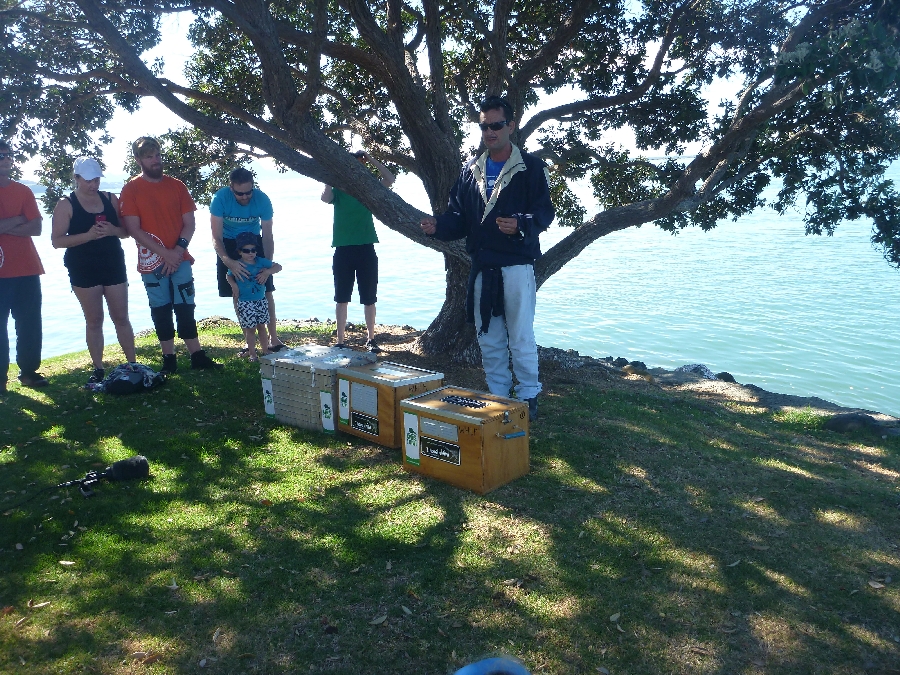 After the Maori greeting, Todd from Backyard Kiwi shared all sorts of interesting facts about kiwis (the ones I'm passing along to you) and told us how his organization and others are working to replenish the kiwi population on the North Island. Happily, they're making great progress, with more than 800 kiwis now living in the Whangarei Headlands area, up from 80 birds in 2001.

Sad Fact: Domestic dogs still kill a lot of kiwis, sometimes intentionally, sometimes accidentally. Because they don't fly, kiwis don't have a sturdy sternum, or breastbone, to anchor big flight muscles, and so their ribcage can be crushed by even the slightest pressure on their chest, such as a gentle mouthing by a curious dog.

After Todd gave his spiel, his partner took one of the kiwis (a female), out of her crate and walked slowly around the group of about twenty onlookers, giving each of us a close-up view of this seldom-seen bird. I was surprised at how calm she was; having been subjected to capture, transport, and now being gawked at by a group of (I would think) scary humans, this young kiwi would have had every right to be completely freaked out. But she wasn't; in fact she seemed to have a hard time keeping her eyes open. This made sense; since kiwis are nocturnal, she would normally be sleeping at this time of day. 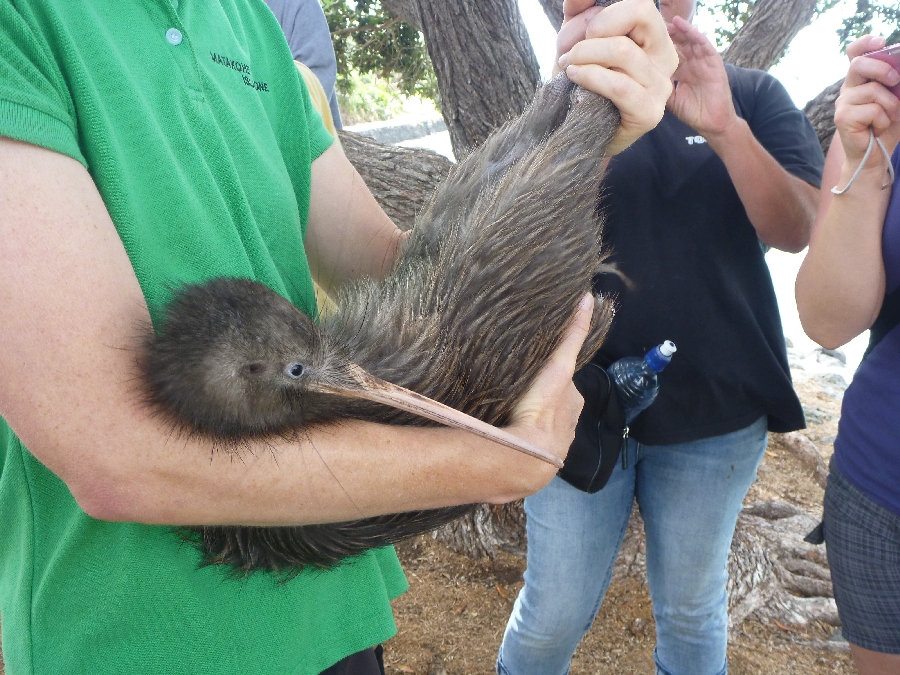 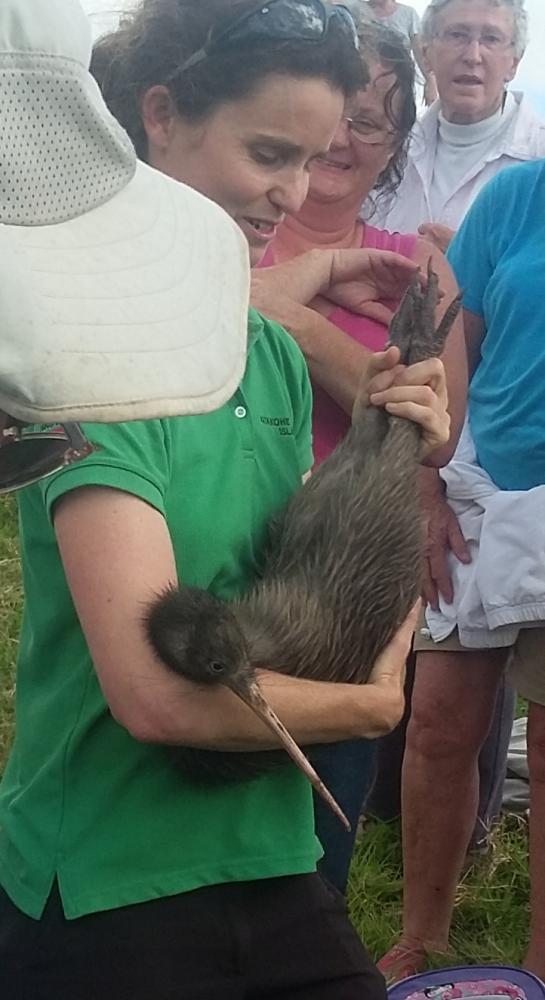 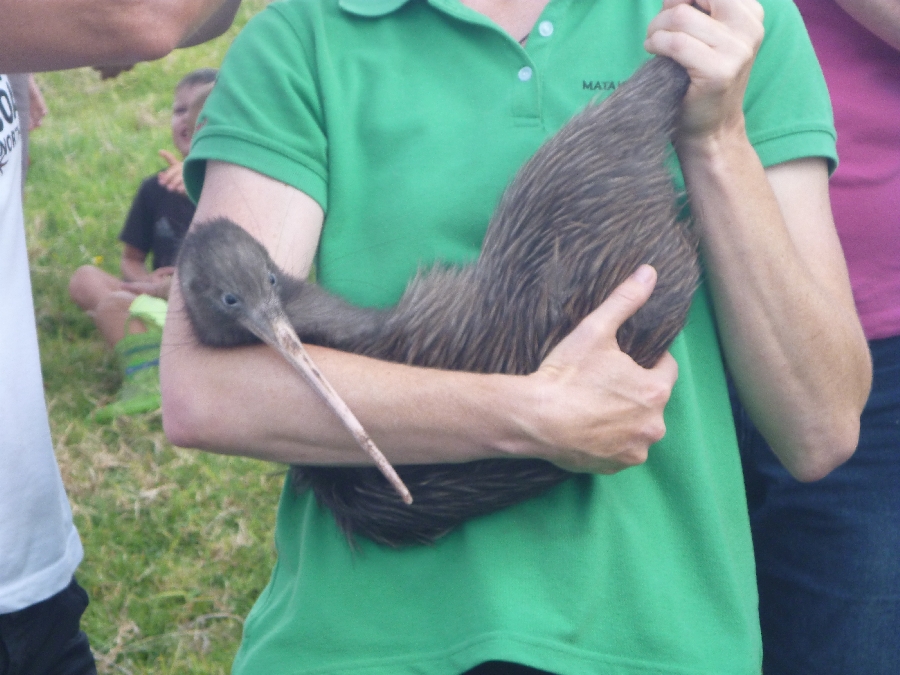 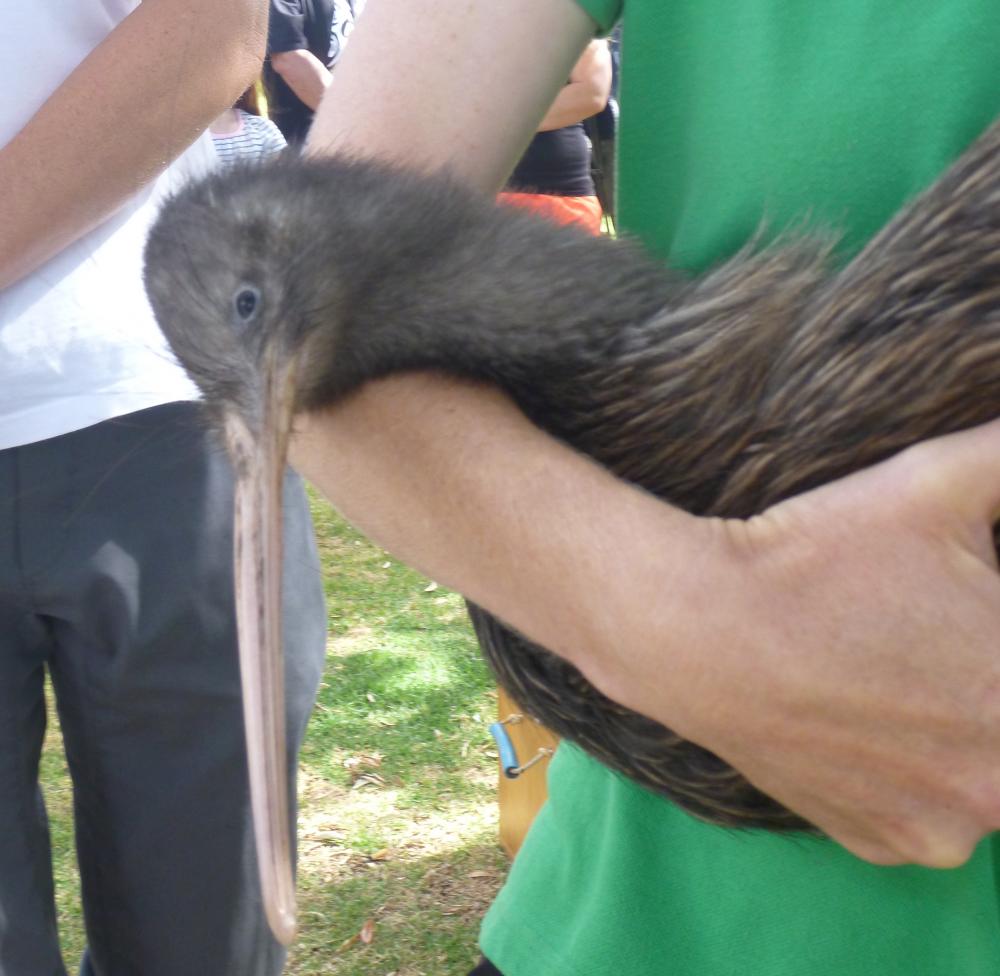 Later on in the afternoon, we met up again with Todd and the kiwis high up on a grassy hill overlooking McLeod Bay. The beginning of the crowd 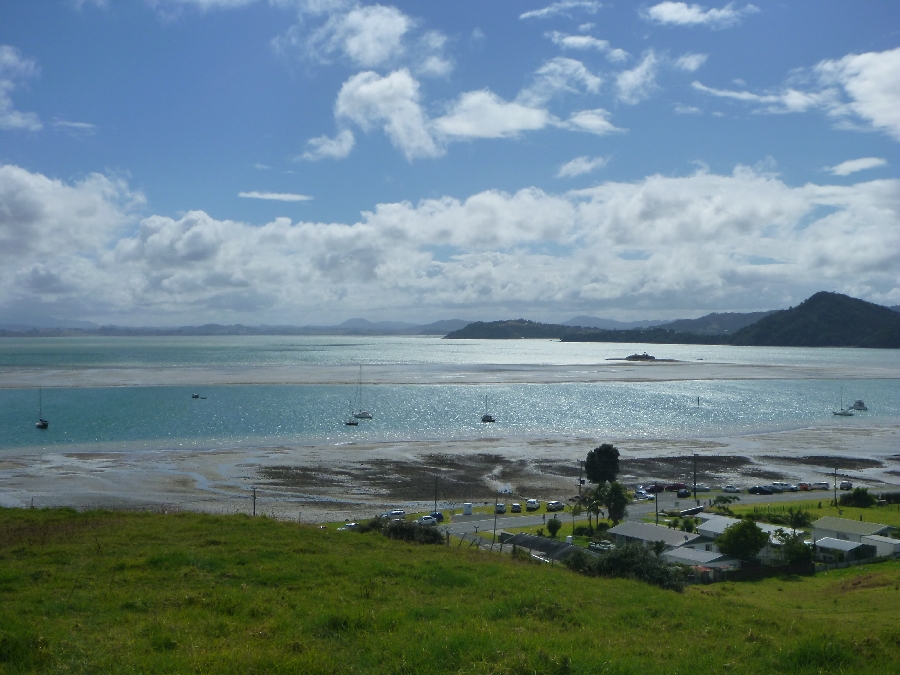 This time, several hundred people gathered to see the three kiwis and to witness their release into temporary burrows dug by Todd for the occasion. 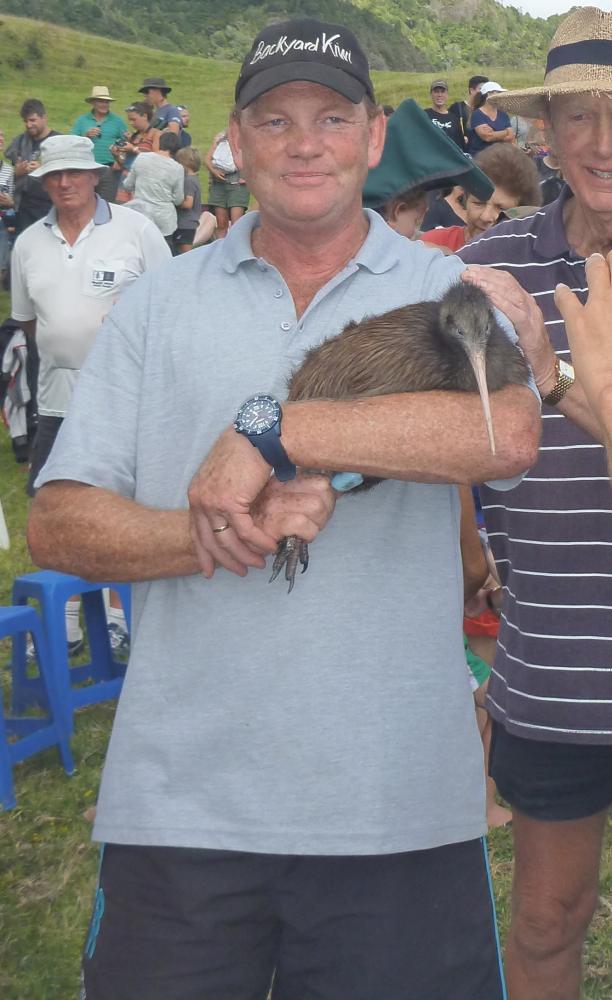 Todd with one of the two male kiwis.

After Todd repeated his presentation for this larger group, and he and his partners walked around with the kiwis, we split up into three smaller groups, each following a different kiwi to its new burrow. Eric and I went with one of the males. 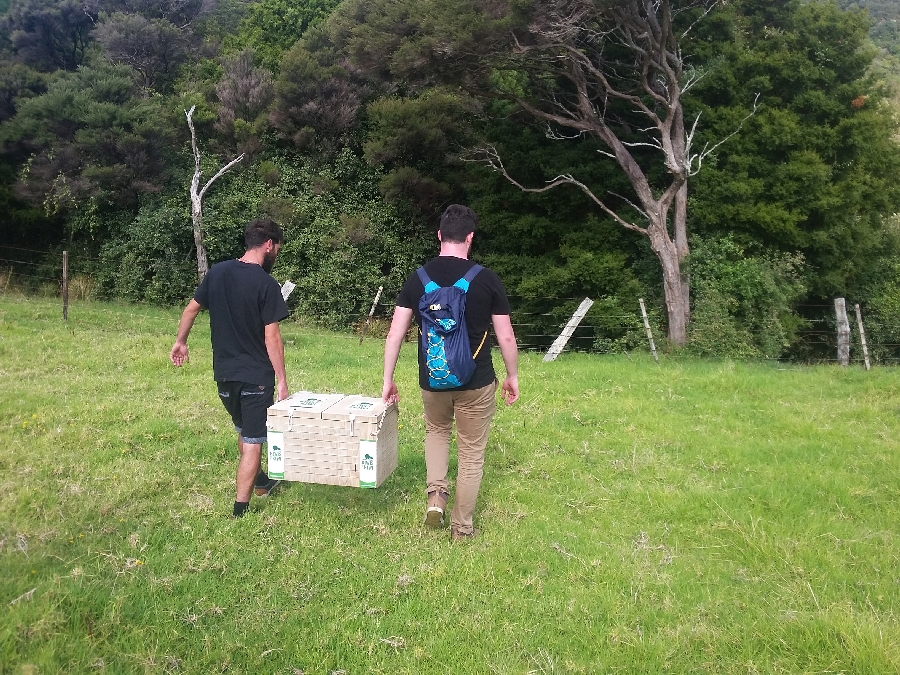 Carrying the kiwi crate up to the burrow.

Todd had dug the burrow into a muddy embankment that was accessed by first slip-sliding down a muddy slope.... The slippery slope down. Todd had tied a rope for us to hang onto.

It was actually pretty funny, to see people holding onto trees and vines, to keep from sliding down the steep, muddy slope at the burrow site. Holding firmly to a sapling with one hand, Eric was able to haul several people up the incline with the other. 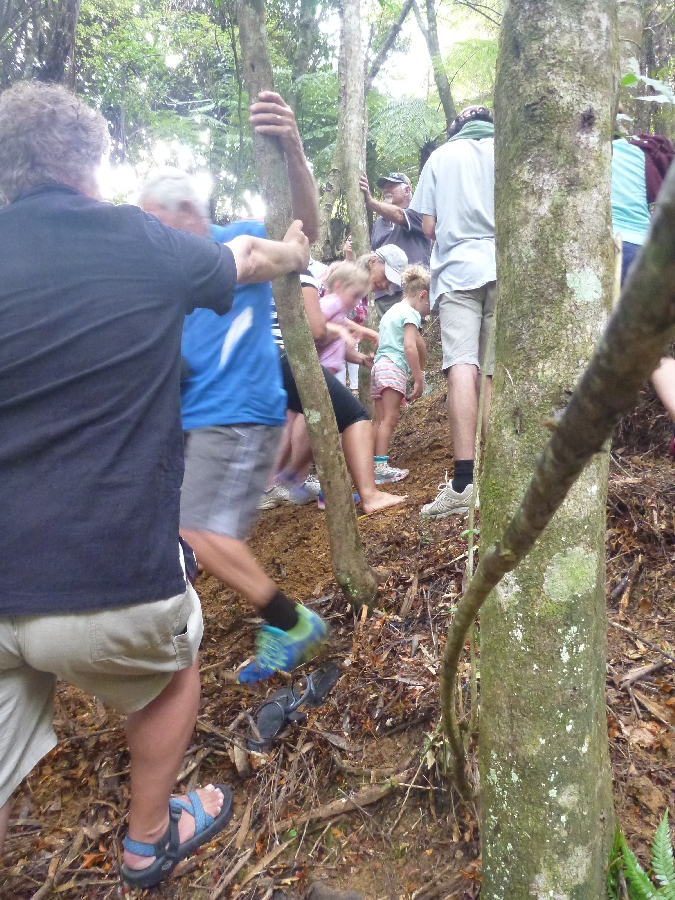 The burrow with a rock in front of it. After releasing the kiwi into the burrow, Todd would roll the rock across the opening until later at night, to keep the kiwi in place until he returned at night to let the kiwi out. The burrow partially closed by a rock. I've traced the upper outline of the burrow. 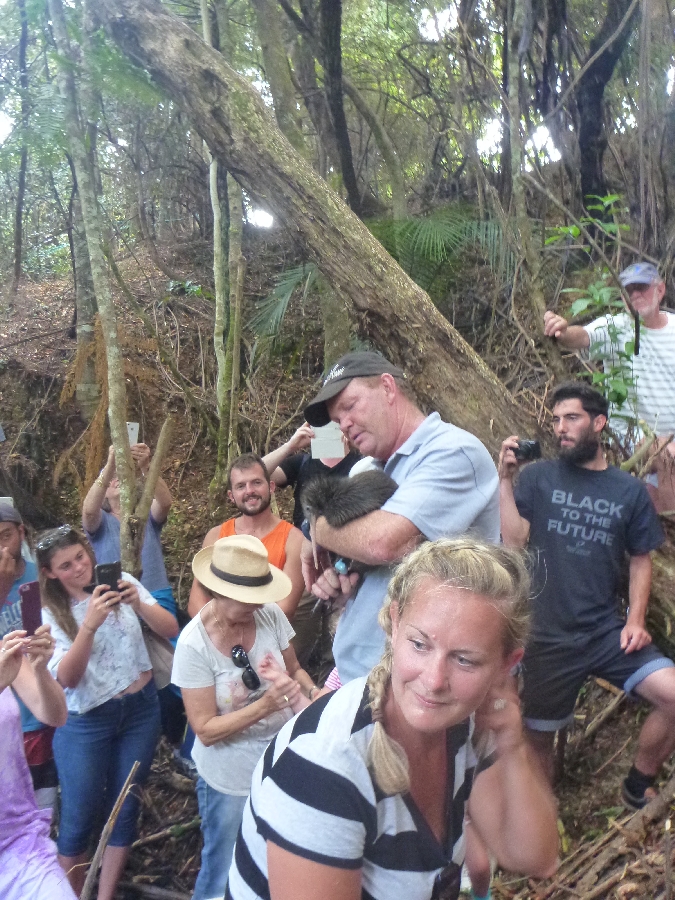 Todd showing the kiwi to our group one more time

The two male kiwis released today each carry a radio transmitter on one of their legs. Todd uses signals from these to monitors the kiwis' movements, along with those of many other previously-released kiwis. He updates these monthly at the Backyard Kiwi website.

When we left the burrow site at the end of the day, Eric and I both felt that we'd witnessed and participated in something very special.

If you'd like to learn more about kiwis and the actions being taken on their behalf, here are a couple of websites to get you started...