Taking Ric's advice to drive through Morrinsville and Matamata on our way to Rotorua, we were rewarded with expansive landscapes of rolling green hills, and tunnel-like canopy drives through primeval forest. 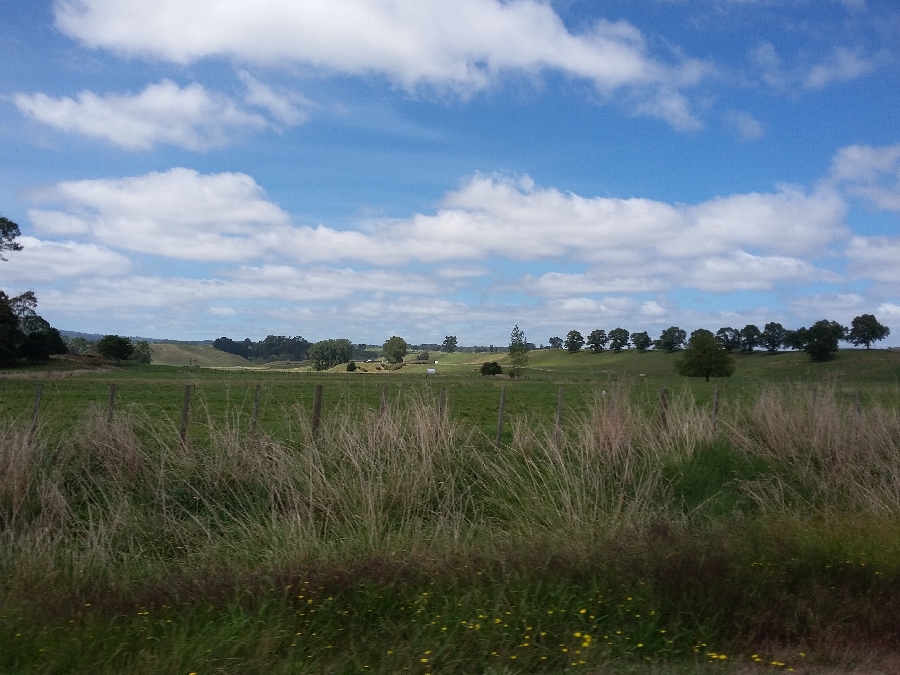 Morrinsville is home to a herd of 42 brightly-colored cow sculptures, placed all over town. Unfortunately, we didn't know about the cows when we drove through Morrinsville; we learned about them later from some friends. Had we known, we definitely would have stopped to find them. Now you know about them, so if you go to Morrinsville you can look for the cows. http://herdofcowsmorrinsville.co.nz/

Matamata is best known as the site of the Hobbiton movie set, attracting Hobbit-botherers from the world over. As Eric and I tend to bother things other than Hobbits, we didn't stop in. But if you're a Lord of the Rings fan, you might want to check it out. www.hobbitontours.com

After our cow- and hobbit-snubbing scenic drive, we approached the outskirts of Rotorua, our arrival presaged by a whiff of its signature sulfury scent. 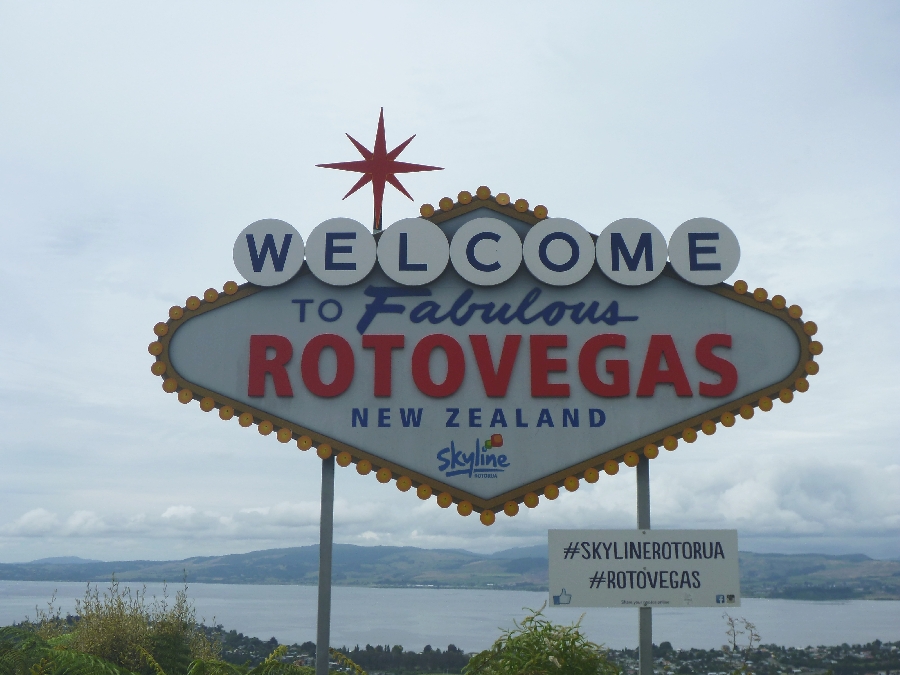 Rotorua is stinky due to its many active geothermal areas, precisely what we came to experience. That - and the luge rides...and some Maori culture...and a DaVinci exhibit. But mostly the geothermal stuff.

We checked into our little log cabin at the Rotorua Thermal Holiday Park. An aside here: one of the many things that New Zealand has done right is to offer travelers a variety of different lodging options at their holiday parks (campgrounds). No tent, no problem - you can rent a motel room, or a dorm bed, or a self-contained unit, or a multiplicity of cabin arrangements. We chose a cabin with a bathroom; why make life harder than it has to be?

The first evening we wandered down to one of the holiday park's communal kitchens, where we cooked up some spaghetti and swapped stories with some other travelers. Later, we put on our bathing suits and strolled down to the holiday park's geothermally-heated hot tubs (the reason why we chose this particular holiday park), where we had a nice soak under a starry sky.

Since we knew that we only had one day before a deluge of rain was forecast to arrive, we opted to spend that day at Skyline Rotorua, specifically to ride its luges. The luges - and most of Skyline's other activities - are accessed by a gondola ride up Mount Ngongotaha, which offers stunning panoramic views of Lake Rotorua and the surrounding area. 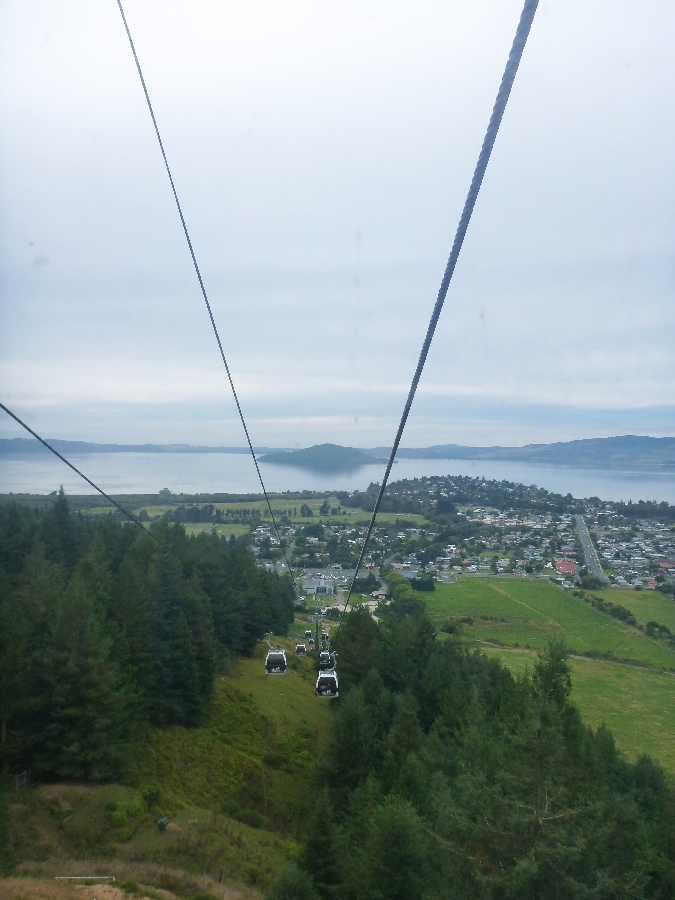 The ride up also gave us a birds-eye view of some of the park's mountain bike runs, with some unbelievable ramps and jumps. 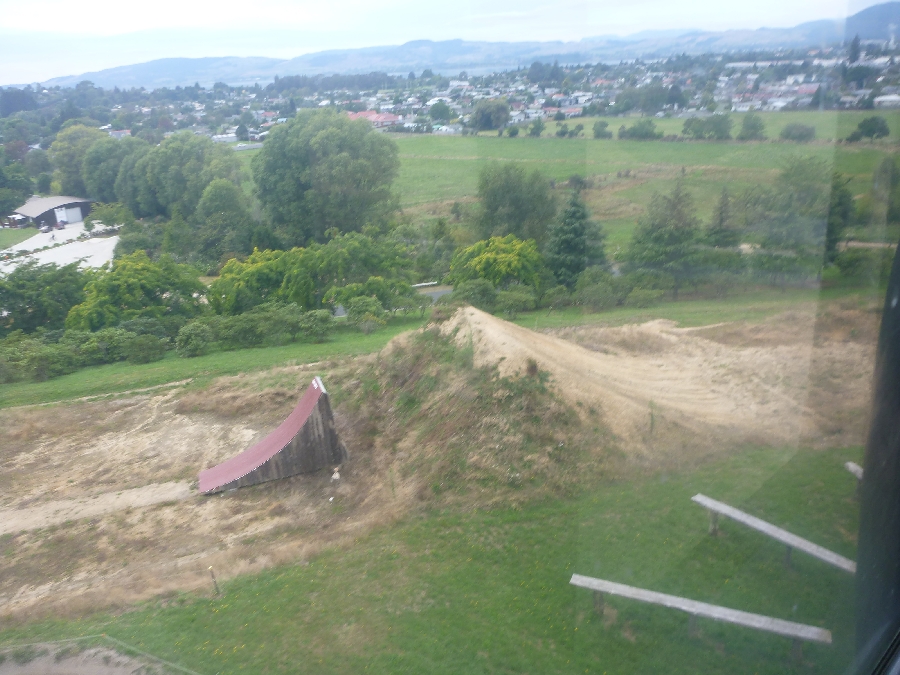 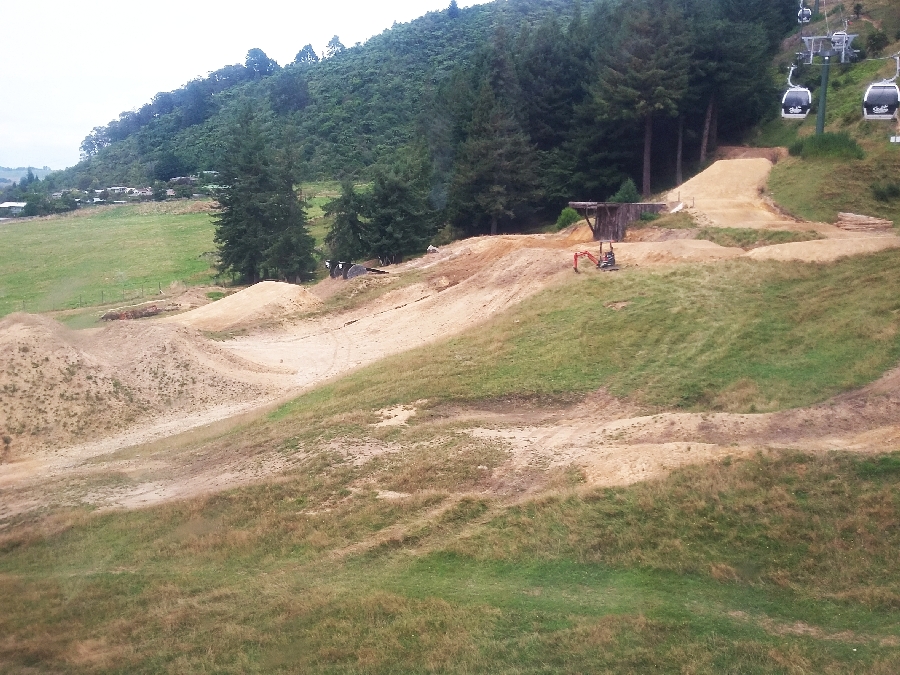 For scale, note the small backhoe near the jump.

We purchased the three-ride luge package. After donning our stylish crash helmets, 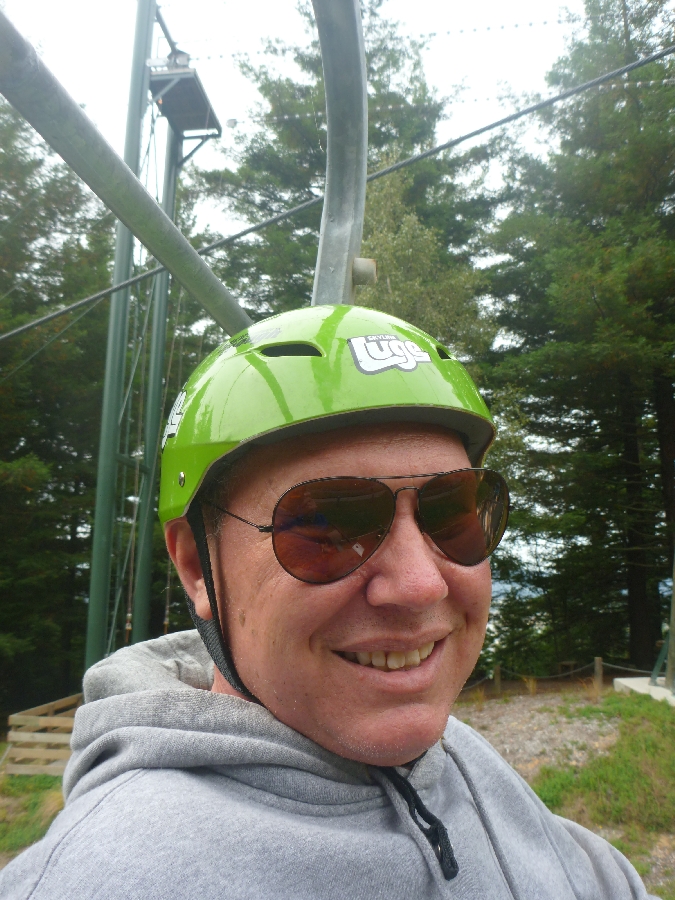 getting a thirty-second-long tutorial in how to make the luge stop and go, and having our picture taken, off we went! 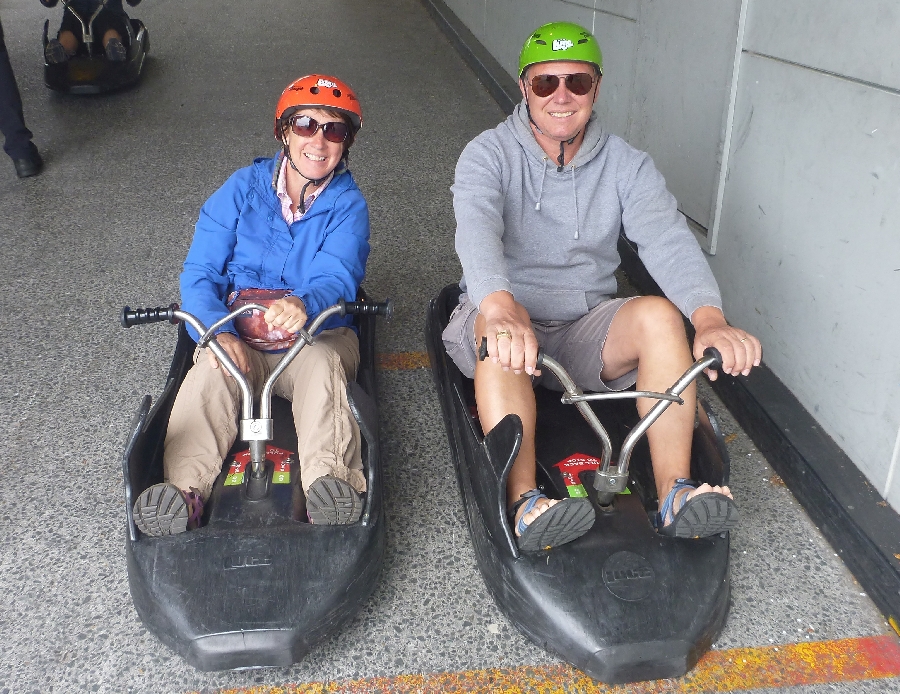 For the next hour or so, we sped down three different luge tracks - sometimes getting airborne, sometimes sliding sideways, always going fast - 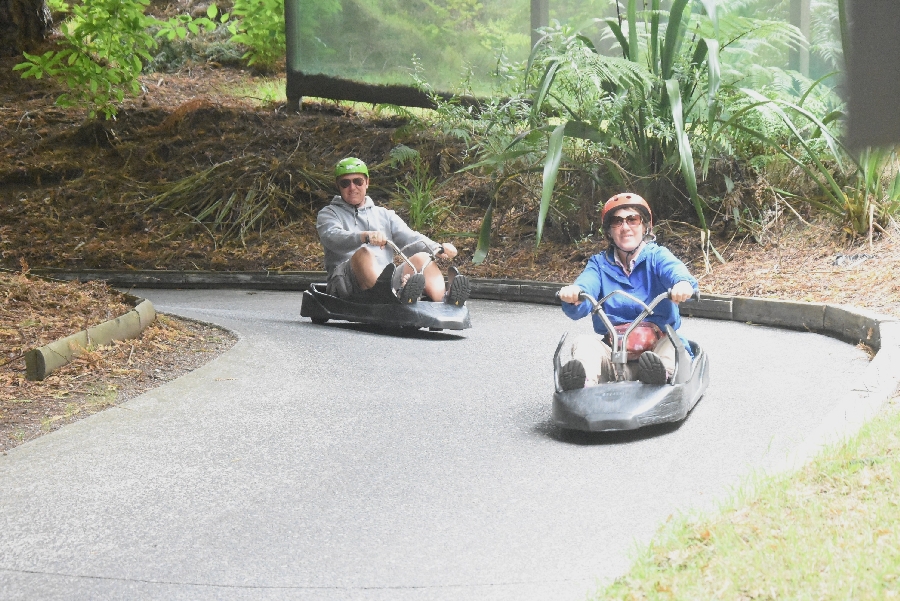 and then riding back up to the top on a luge-toting ski lift. 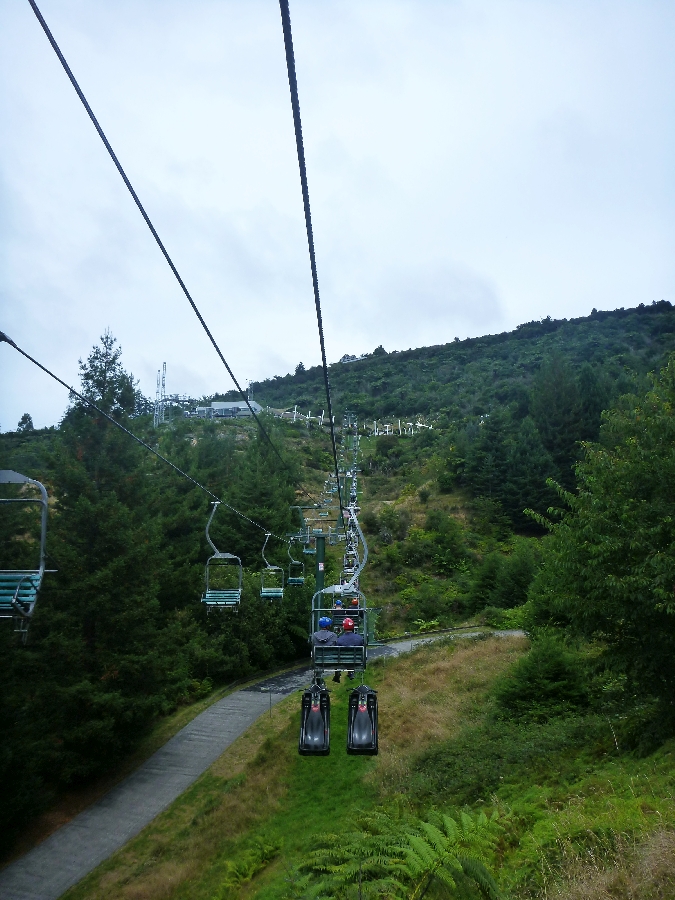 We were surprised to learn that the luges were designed in Rotorua and are still built there, being used locally or shipped to other luge runs all over the world.

After our luge runs, we walked along a natural history trail, 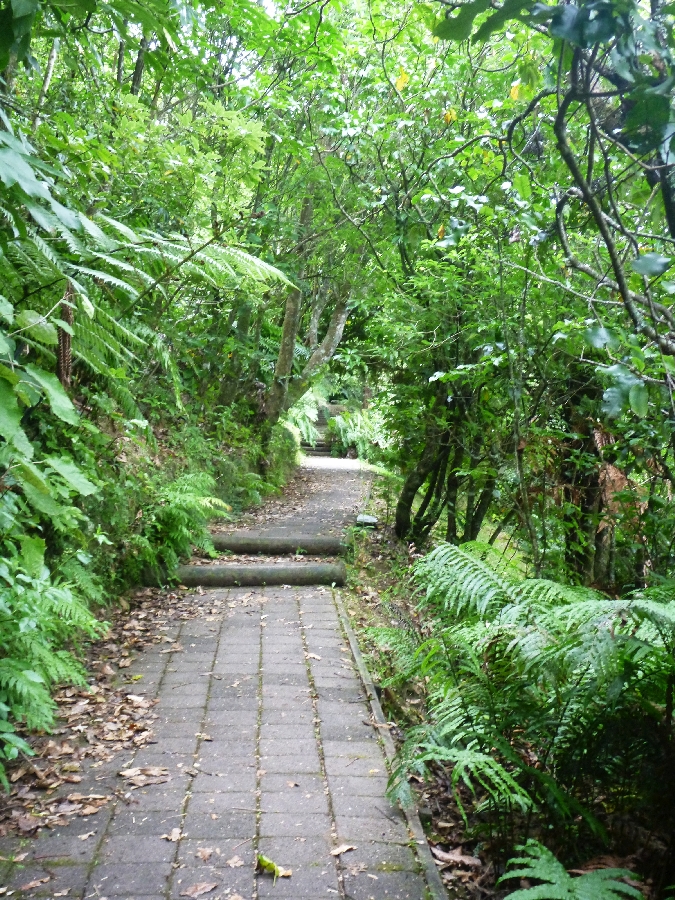 and then wandered into the Volcanic Hills Winery tasting room, perched on the edge of the mountain. Sitting before a floor-to-ceiling window, we enjoyed five of their wines, while nibbling on assorted cheeses and fruit, and gazing out over Lake Rotorua. 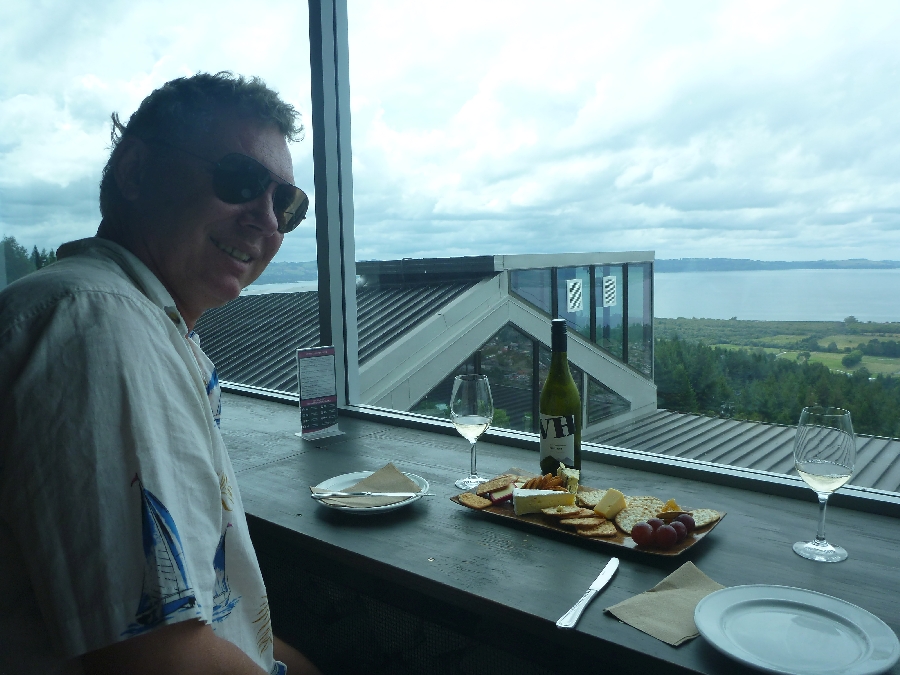 We ended our fun day with a gondola ride back down the hill.

Besides luge runs, Rotorua offers many other options for those seeking adrenalin rushes, including bungee jumping, jetboat rides, ziplines, giant swings, skydiving, a ride called Shweeb, in which you sit in a clear capsule and pedal yourself along a monorail at up to 40 mph. Two other goofy-sounding activities are Zorb and Ogo, both giant "hamster ball" rides made for humans. You get inside these big transparent balls and then roll down a hillside. I wondered if they have a barf basin at the bottom; I can't imagine not needing one after that. We stuck to luges.