At seven o’clock, armed with our sparkly blue box of drinking glasses and our little brown paper bag of kava powder, we walked to the parking lot to meet Kumar. He was there, wearing a bright island shirt, smiling and waving to us. Another man stood beside him.

“Very well,” he said. “This is my brother, Ashwin.” He indicated the man next to him. “He’ll be your driver. I have to make a trip to the airport. I’ll meet you later at my house.”

We shook hands with Ashwin and exchanged Bula!s. As we walked to Ashwin’s car, Kumar called, “Do you like Fiji beer?”

We chatted with Ashwin as he drove us the dozen or so miles to Kumar’s house. The route took us from Denarau Island, through the business district of Nadi Town – where Ashwin pointed out the clothing store in which he worked – and finally into some fields on the other side of town. We bumped for awhile along a dirt road that wound through tall woody stalks of sugar cane, here and there punctuated by dirt driveways. Ashwin turned down one of these driveways, which ended at Kumar’s house: a rectangular building about 20 x 30 feet; its foundation, patio and walls were made of concrete; the roof and upper portion of the walls were corrugated metal.

On the covered patio was a round table, on which rested a pitcher and some drinking glasses (small ones, I noticed, the kind with pretty decorations on the sides). Standing beside the table, wearing a brightly-colored dress, was Kumar’s wife. She smiled and greeted us warmly, “I’m Anita,” she said. “Welcome.” When she shook my hand and kissed my left cheek, I suddenly realized that I hadn’t done my homework about Fijian greetings, beyond the “Bula!” I made a mental note to get up to speed on that before our next invitation.

Anita poured juice for the four of us and we sat making small talk. Soon Ashwin’s wife and their two young sons came over (they live in a neighboring house), presumably to see the crazy Americans who live on a boat. Though the conversation was in English when it involved Eric and me, the family members drifted from time to time into what I think was Hindi, when speaking with each other. Kumar – who hadn’t yet arrived – was clearly the extrovert of the bunch.

An indigenous Fijian man wandered over from across the yard, found a chair, and sat down with us. “Bula!” he said, with a big smile.

“Bula!” everyone said. Eric and I introduced ourselves, and the man did the same. “My name is Paula,” he said, pronounced “Pah-oo-lah.”

Now we were eight, sitting on the porch, making small talk…sometimes in English, sometimes in Hindi, sometimes – now that Paula was included – in Fijian.

After about a half hour, Kumar arrived and, striding onto the porch, welcomed us exuberantly to his home. He had a big, unopened bottle of Fiji Gold beer in one hand. After some pleasantries he asked, “Do you have the kava?” We showed him the bag. “Good,” he said. “Let’s have kava.”

A smattering of Hindi from Kumar roused the family members, who stood up and quickly fashioned a seating area on the concrete patio floor, comprising two large, decorated rugs with padding underneath. Kumar invited us to sit on the rug, which we did. Kumar and Paula sat down with us. Anita handed Kumar a large bowl, a pitcher of water, a dishtowel-sized piece of cloth, two small ceramic bowls, and three coconut shell bowls of different sizes. What little I knew about the kava ceremony (sevusevu, as it’s known in Fiji) included this fact: it’s considered impolite not to drink your share in one gulp. I made a quick grab for the smallest coconut bowl, which when full might have held about four ounces of liquid. Eric took the next size up (maybe eight ounces); Kumar and Paula were happy to use the two ceramic bowls which held twelve ounces or more.

Paula placed the kava powder in the cloth and as Kumar poured water over it, squeezed the suspension through the cloth, into the large bowl. They repeated the process until all the kava had been sifted into the water, and then added a bit more water to the bowl, to get the consistency just right. The correct consistency being a watery brown concoction. 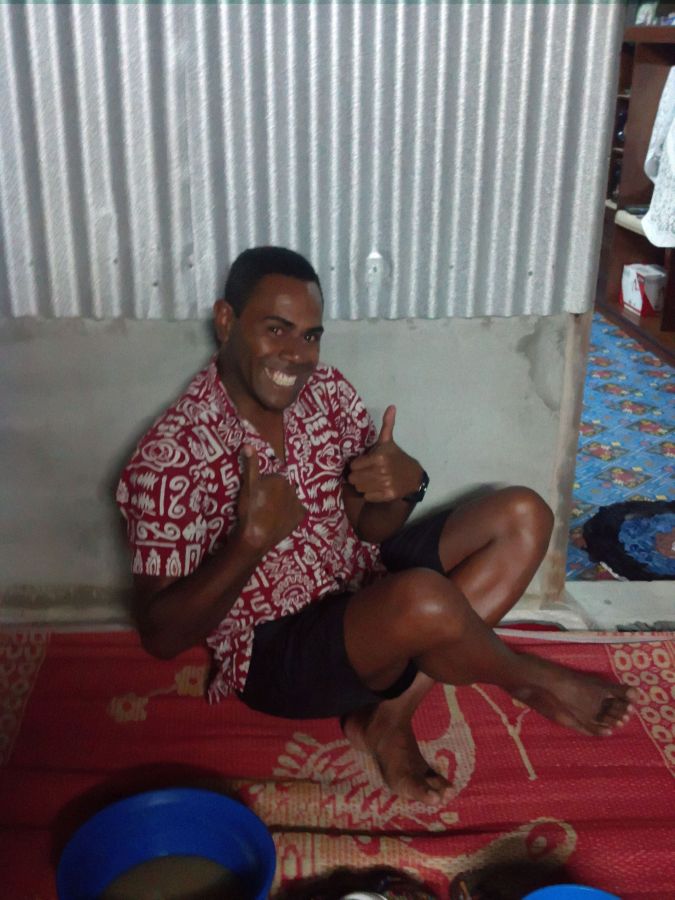 “Your tongue might feel numb after you drink it,” Kumar said, as he handed me the small coconut shell of kava, filled only about half full, as I’d asked. He, Eric and Paula then clapped slowly three times, and I drank the kava – all in one draught. As I tipped the cup back, I noticed Ashwin’s two sons watching me intently, curious to see my reaction. Swallowing the kava, I put down my cup and clapped once, as Kumar had instructed, to indicate that I had finished.

[A side note here: apparently the pattern of clapping in kava ceremonies varies from group to group. When drinking kava in a traditional Fijian setting, the guide books tell us, one claps once before drinking, and three times afterwards.]

I thought the kava tasted like peppery dirt, reminiscent of ginseng tea. Not terrible, but not something I would drink for its flavor. As for its effect, my tongue didn’t go numb, but it did tingle a little, for about a minute. I didn’t notice any other effects.

Eric, Paula and Kumar each took their turns. During the short break that followed, Kumar poured Eric and me each a shot glass full of Fiji Gold. Then we each had another round of kava. Again my tongue tingled a bit, but that was it. Eric said that his tongue felt numb and he felt slightly relaxed after downing his kava. Maybe if I’d consumed more, I would have felt more of an effect. Certainly Paula and Kumar, who were quaffing bowlfuls of the stuff, were showing signs of being relaxed.

We had a relaxed conversation about life in Fiji, the politics of sugar cane farming (Kumar had been a sugar cane farmer, until the 99-year lease on his land had expired), the islands they visit to see their extended family, his other house in the country, the faster pace of life in America, and the relative costs of things.

After three rounds, Eric and I had consumed all the kava we wanted, though another couple of liters remained. By now, it was nine o’clock, there had been no mention of dinner, and I suspected that Anita was waiting to serve dinner until we were finished with the kava. I asked Kumar what would happen with the remaining kava. “Paula and I will drink it,” he said. And so they did, over the next half hour or so, becoming ever more relaxed in the process. When Kumar pressed a $5 bill into Paula’s hand and asked him to go to a neighbor’s house to buy more kava, I started to get a little nervous about riding back to the marina with him.

Nine-thirty came and went. The food that Anita had prepared was on the table. I began to wonder if we were going to have dinner at all. Then, just after ten o’clock, Kumar suddenly announced, “It’s dinner time.” He stood up, as did Eric and I. “You two will have dinner with Anita,” he said.

“No,” Kumar said, sitting down on the mat again. “We’re just drinking kava.”

Before going inside for dinner, Anita led us over to the edge of the porch, where she poured water over our hands from a water bottle to clean them. We entered her tidy house, and Anita asked us to sit at the table, which I now noticed had only three plates. And three more of the small decorated glasses. I wondered if she would find a use for the large, unadorned drinking glasses we’d brought, which were still in their shiny blue cube. 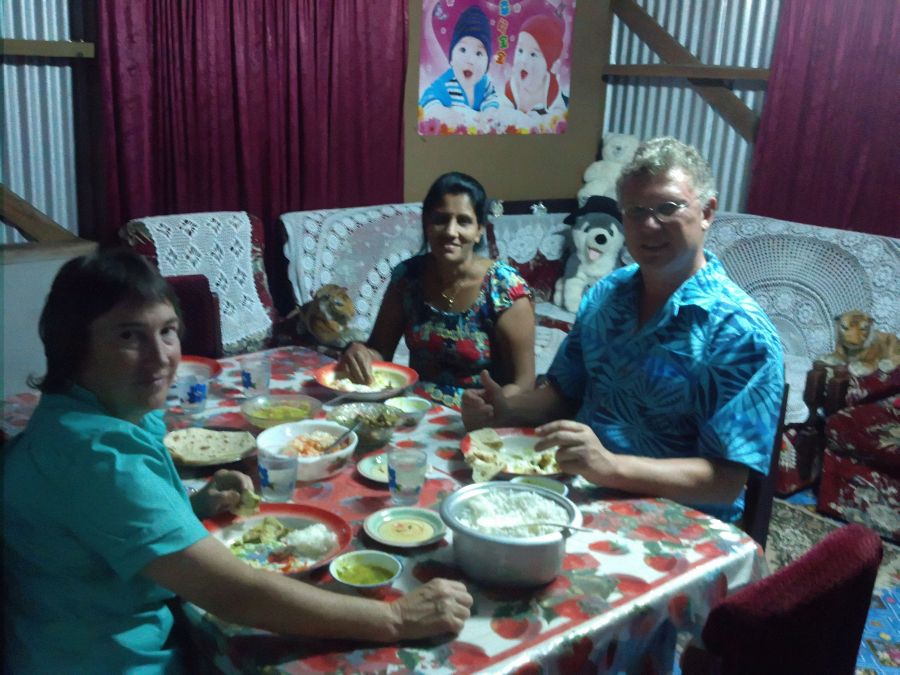 “I made roti for you,” she said. “Do you like roti?” (Roti is Indian bread similar to a tortilla.)

Glancing around, I noticed that there were no utensils with which to eat the chicken curry, rice, dal and salad that Anita had prepared. Apparently, that was what the roti was for. Anita demonstrated how to tear off a small piece of roti, and use it to pick up our food, similarly to eating Ethiopian food with injera bread. We followed her example. All of the food was very tasty.

Anita eventually dispensed with the roti and ate her meal with her fingers. This actually made it easier to eat the chicken curry, which seemed to have been prepared by hacking the chicken into chunks with a cleaver, before putting it into the curry pot. Eric and I followed suit again, staining our fingers turmeric-yellow in the process, a souvenir of the evening’s festivities.

Kumar appeared in the doorway, quite relaxed, eyes a bit bloodshot. “Are you finished?” he asked jovially. When we replied in the affirmative, he said, “Did you like it?”

“Yes, very much! Everything was delicious.” Anita beamed.

“Good,” he said. “Your ride is here. Ashwin will drive you back to the marina.” Ashwin smiled at us from beside Kumar. Was I ever glad to see him.

A few days later, we welcomed Kumar and Anita onto SCOOTS, where we enjoyed fruit juice and conversation. But no kava this time. Kumar and Anita told us that they’d been on quite a few boats – mostly large ferries – as they visited their family on different islands. Afterwards, we walked along the dock, checking out the massive and amazing superyachts berthed near SCOOTS.

When we said goodbye, Kumar told us to call him the next time we were in town, so we could get together again. And he promised to bring roti and curry at 7:00 the next morning, which he did. Eric and I enjoyed it for lunch later that day. It’s nice to have friends in Fiji.