Magnetic Musket Cove, and a Rant about religion and pronunciation With four months to explore Fiji, Eric and I had to decide where to spend that time. So on one of those breezy days while we were anchored off of Akuilau Island, we sat down with a map of Fiji, a Lonely Planet Guide, a selection of cruising guides, and discussed our options.

Which of Fiji's 333 islands do we want to visit? Fortunately, since we plan to cruise Fiji for more than one season, we don't feel compelled to visit all – or even most – of the islands this time around. Add to the mix the fact that most of those islands are upwind of our current position, making some of them much less attractive. So we decided, for the moment, to just focus on Fiji's western district, beginning with the Mamanuca and Yasawa Island groups, strung like four dozen bright pearls off Viti Levu's northwest coast.

I'm going to make a small digression here, perhaps even a tiny rant, to consider the intersection of religion and pronunciation. What, you may ask, could these two topics possibly have in common? Quite a bit, actually, in the South Pacific. Here's why. We'll begin with the pronunciation of the Yasawa and Mamanuca Island groups: Yasawa is pronounced “yah-sah-wah,” pretty much as you'd expect from its spelling. Mamanuca, on the other hand, is pronounced, “mah-mah-nu-THa.” Yes, here in Fiji, the letter “c” is pronounced “th.” The Fijian language has other letters that are pronounced differently than we pronounce them: for instance, the letter “g” and the letter “q” are both pronounced “ng.” (Apparently, the two “ng” sounds are slightly different, but we don't need to delve into that much detail.)

Those are some really odd pronunciations, especially the “c” and “th” thing. Why is that? I wondered. And then it occurred to me: it's the Christian missionaries' fault. While they were in Fiji, converting the locals to Christianity, the missionaries also took the opportunity to codify the Fijians' oral language into a written language, assigning letters to the sounds. And here is where I go berserk: why, when presented with the sound “th,” did they decide to assign it the letter “c”? What were they thinking?! Eric suspects that some of the missionaries spoke Castillian Spanish, in which “c” is pronounced as “th.” He could be right.

And they've done this same sort of thing all over the Pacific. You've heard of Christmas Island? That's how it's pronounced, but this is how it's spelled: Kiritimati. The island nation that's pronounced “Kiribas” is spelled Kiribati. Why did the missionaries assign the letters “ti” to an “s” sound? Why, when given the opportunity to make written languages from previously oral-only languages, did the missionaries pulled these stunts. They knew how to read and write and spell; I can't fathom why they would have done that. Unless they just wanted to mess with us.

The first place we visited in the Mamanucas was Musket Cove on tiny Malololailai Island (the word “lailai” even means “small”), a two-hour sail beginning with a straight shot across relatively deep water, culminating in some careful motoring among coral reefs. While Eric watched the charts and manned the helm, I maintained a lookout on the pulpit, radio in hand, peering into and across the water through polarized sunglasses, looking for the telltale bright green or light brown that signal danger. I saw a lot of it – all where our charts indicated that it should be, and none of it right in front of us, which was good.

Cruisers had warned us: “Musket Cove is like a giant magnet...once you get there, you won't want to leave.” This magnetic attraction is most likely due to the combination of a welcoming yacht club, inexpensive moorings, a small but well-stocked market, several cruiser-friendly resorts, lovely scenery and snorkeling spots, a waterside bar, and even a small marina. We tied up to a mooring ball, then enjoyed lunch and our traditional arrival beer in the cockpit, peering around at the thirty other boats anchored or moored with us, some friends from other places, some friends yet to be made.

The Mamanucas are known for their resorts, and Malololailai has three of them – Musket Cove Island Resort, Plantation Island Resort, and Lomani Resort – each attracting a different clientele, together hosting hundreds of people at any given time. That's a lot of humanity squeezed onto a 2.4 square mile island. Consequently, the bay out in front of the resorts is a busy place: pangas zipping by, loaded with bathing suit-clad pink tourists out for a day of snorkeling, diving, shark viewing, or sunbathing on a remote beach; floatplanes skimming to landings near shore, transferring passengers to and from waiting pangas, then roaring away, their pontoons trailing plumes of spray as they gathered speed; helicopters and small planes landing and taking off from the dirt runway, their movements obscured by giant clouds of dust; kayakers paddling by; snorkelers bobbing over the reefs. In the midst of it all, cruisersbuzzed in their dinghies between their boats and the marina's dinghy dock. It was an exciting environment to be immersed in. The "private island" portion of the resort.

We enjoyed meals in the restaurants of both resorts, and sundowners on board SCOOTS and our friends' boats. We bought groceries and produce from the small store, and walked all over the small island. We always seem to find the hidden underbelly of places. Here's the resort's reverse osmosis plant. Gathering sand for our beach sand collection (we now have sand from 92 beaches)!

One day, we went in search of the organic farm that friends had told us was on the island. Our trek took us along the airstrip, past a junkyard of worn out machines, past some old boat molds, and into the scrubby forest, where we found birds and even more discarded machinery. 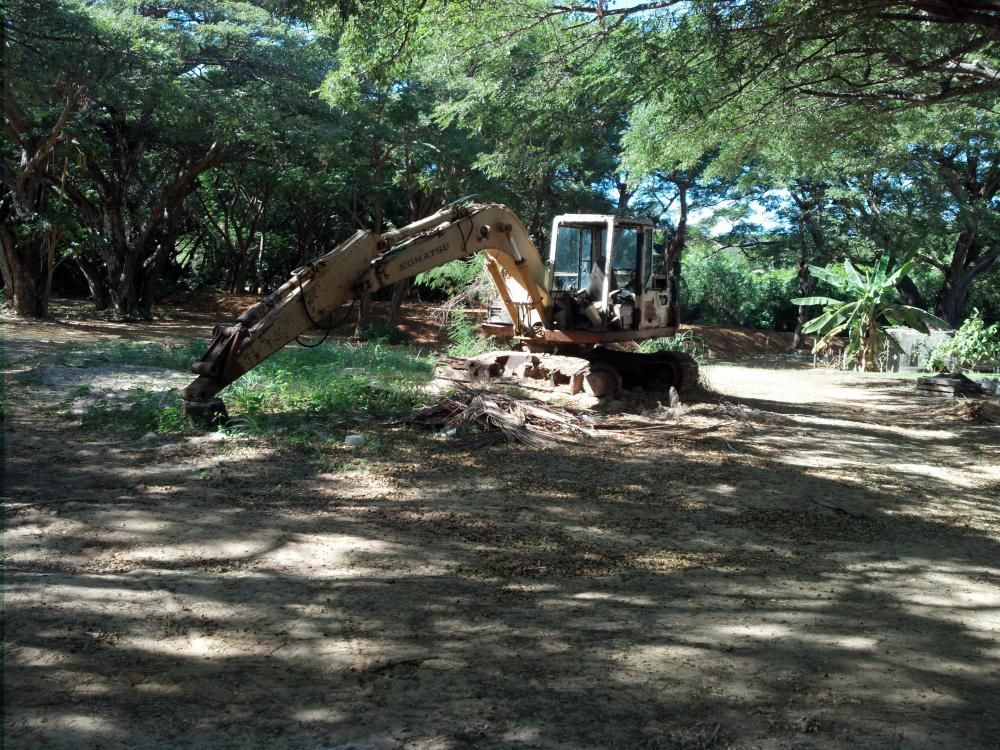 we eventually found the farm, a compact, verdant collection of healthy-looking produce, but we didn't buy anything as no one was around at the time to sell us anything. Another day, our wanderings brought us to a fourth resort – Malololailai Lagoon Resort Club. As we walked among the dozens of cute little bures, set amidst well-tended landscaping, and fronted by a white sand beach, we soon realized that this was not an operating resort. The place was abandoned; eerily quiet. Peering through the window of one locked bure after another, we found the same scene: interiors set up as if waiting for guests to arrive – kitchenware on the counters, bottles of dish soap near the sink, pillows and sheets stacked on the beds – and porch furniture stored inside, out of the elements. The place had the same feeling as the two deserted hotels we'd visited in Baja: abandoned, but poised as if waiting to suddenly explode into life again. Beyond the bures, the evidence of neglect was more pronounced: a cracked and weedy tennis court, a swimming pool half-filled with milky green water. Our bare arms suddenly bristled with mosquitoes, who were apparently enjoying the pool. We slapped them away and made a quick exit from the shady silence of the abandoned resort, to the sunshine of the dirt road beyond.