Mana: a resort with an island around it After three days at Castaway, we were ready to explore another island. So we pulled up SCOOTS' anchor - at the end of 240 feet of chain - and headed north to Mana Island. As the seagull flies, Mana lies only about 3.5 miles away; but the seagull doesn't have to worry about reefs, and we do. 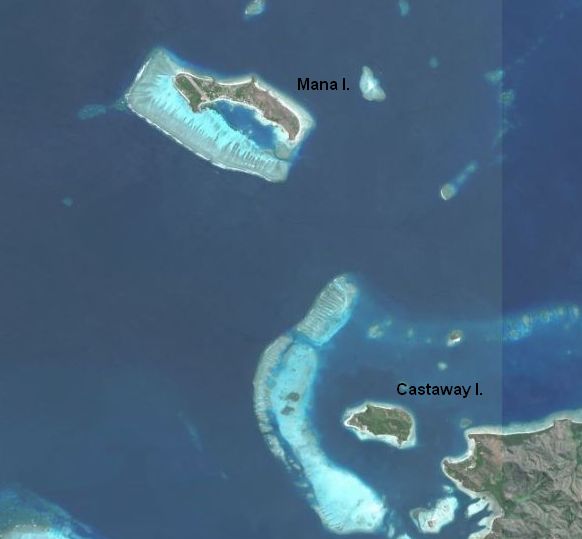 As you can see from the picture, we had to wind our way around and between some reefs, so our total distance was more like 5 miles. Still, not very far at all. We're really digging this coastal cruising!

We had a lovely sail to Mana, with SCOOTS' genoa catching the wind. I stood on the bow - my customary station whenever we navigate Fiji's reef-strewn waters - keeping a lookout for any uncharted reefs. We didn't encounter any. All the reefs were quite well-marked on our charts and Google Earth images.

Mana's south side has a large lagoon enclosed by a stunningly beautiful reef. Most of the resorts and concessions are located here, as well as the usual anchorage. But the wind was still blowing quite hard from the south, so we rounded the eastern shore of the island and took refuge from the wind and waves on the north side of the island, dropping SCOOTS' anchor in 65 feet of calm water off a lovely white sand beach, shaded by coconut palm trees. I'll never get tired of white sand beaches with palm trees. 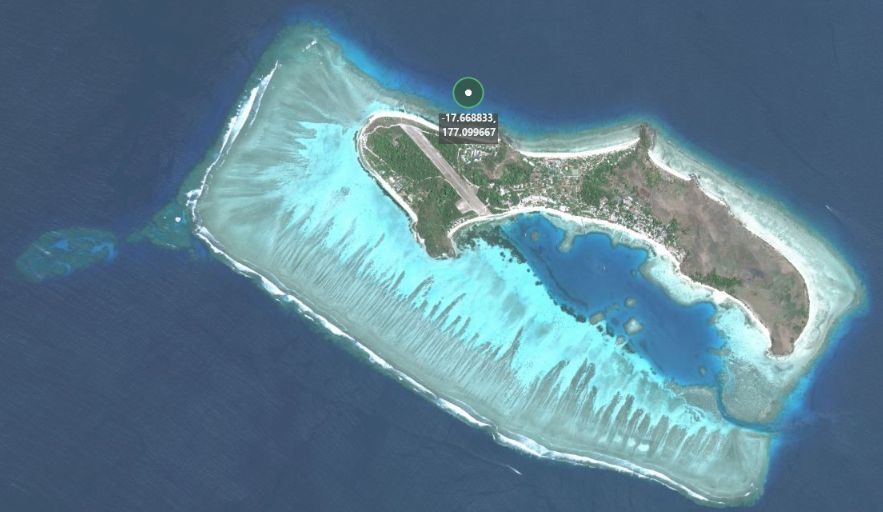 We took our dinghy to the beach one day, and explored the many winding trails of the Mana Island Resort. This large, family-friendly resort sprawls over most of the island, along both north and south shores, as well as across the middle. It offers a wide assortment of activities, a large selection of bures, several restaurants, a few swimming pools, and even a sea turtle rookery. Three or four green turtles were lazing about in the water of their small enclosure when we were there.

We also wandered over to the lagoon side of the island, where the strong winds were keeping most of the water toys on the beach. It's a long jump to the dock.

If family-friendly Mana Island Resort isn't your style of accommodations, you have two other options: an inexpensive backpacker hostel and Tadrai, a five-star resort catering to couples.

The wind blew quite hard during our time at Mana, even on the back side of the island where we were, so we spent most of our time on SCOOTS. We did meet some other cruisers who dropped the hook near us, and I paddled our kayak around one day when the wind had lulled a bit. After a few windy days, we set sail for Monuriki Island, a picturesque island featured in the Tom Hanks movie, Cast Away.