The Prudent Mariner Goes to Fiji, and the ReefCon Scale Cruisers began dropping this advice on us even before we'd left New Zealand to sail to Fiji. Once we arrived in Fiji, the admonitions continued. Well-meaning wisdom passed along from cruisers who'd sailed Fiji's reef-strewn waters before us.

Why, pray tell, should one "never, never, never, never, NEVER sail at night in Fiji"? The main reason is that compared to other places we've sailed, the charts for Fiji are woefully incomplete. Though the charts seem to show most large reefs and extensive shallow areas, it's possible - maybe even likely - that not all reefs, shallow areas, and keel-raking coral bommies are charted. Also, large swathes of the charts are unapologetically marked as "Unsurveyed"; big blank areas that may or may not contain things a boat could hit.

So how does the Prudent Mariner navigate in Fiji? The Prudent Mariner sails only in the daytime, uses more than one kind of chart, consults said charts continually when underway, posts a lookout on the bow (or in the spreaders if he or she feels like a monkey), and, when available, follows the trail of waypoints provided by other cruisers who've previously - and successfully - navigated the same route.

Because we consider ourselves disciples of the Prudent Mariner, Eric and I have been following all these safeguards when traveling around Fiji. When we sail (always in the daytime), I'm the Lookout and Eric's the Navigator. After raising the anchor, I take my position on the bow pulpit, sporting my stylish, Prudent Mariner-approved polarized sunglasses, 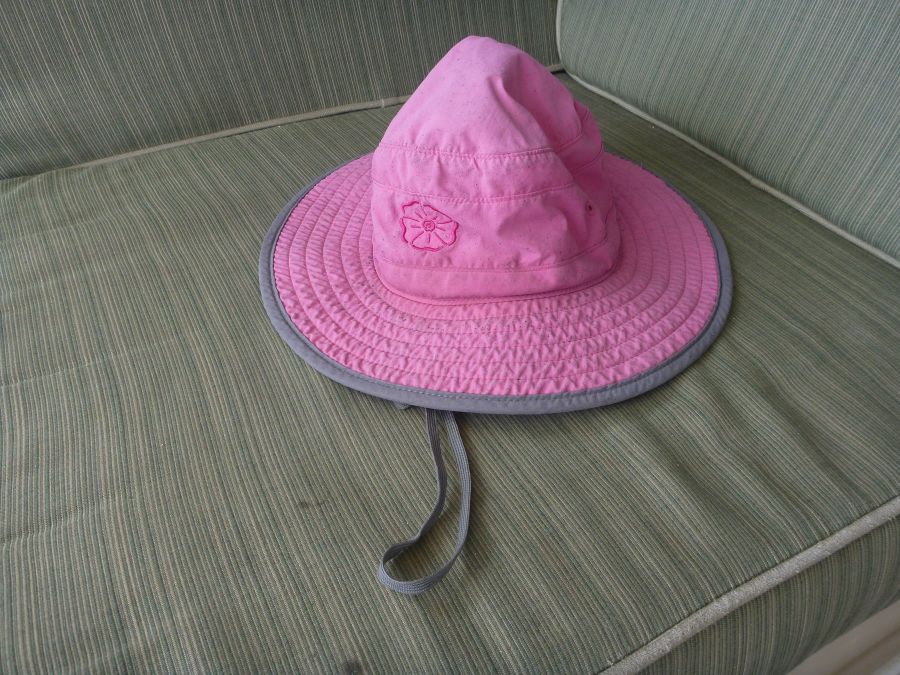 a generous slathering of sunscreen, and my little handheld radio, which dangles jauntily from a strap around my neck. 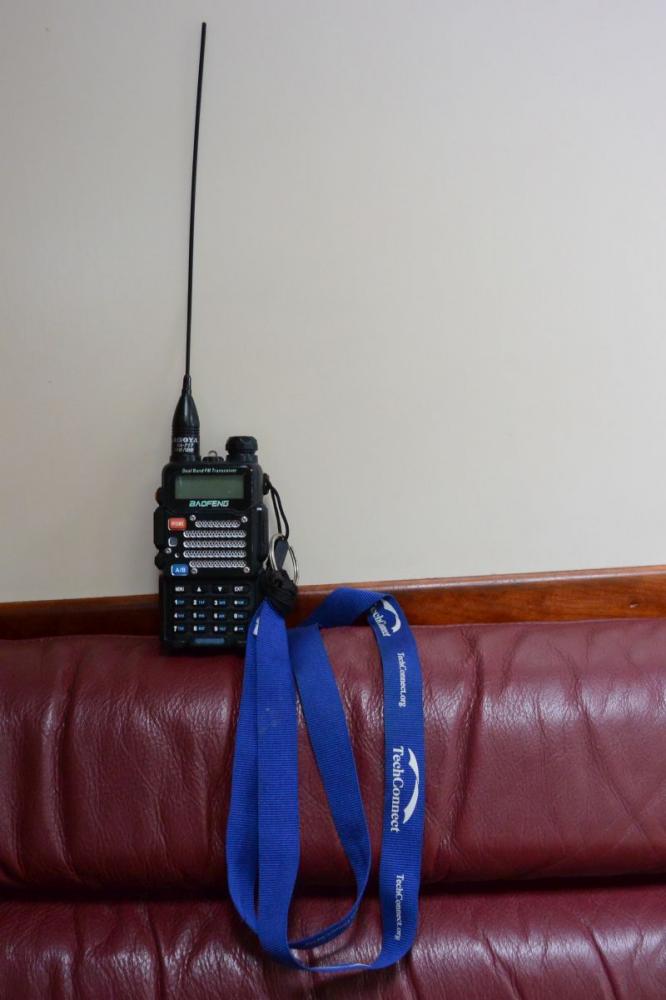 Eric hangs out in the cockpit, keeping an eye on our progress, making sure we avoid obstacles that appear on the chart, and adjusting our course as needed. Sometimes he'll call me on the radio, to see if I can spot an area of shallow water or a reef that's indicated on the chart.

I wear polarized sunglasses because they block much of the glare that shines up at me from the water, 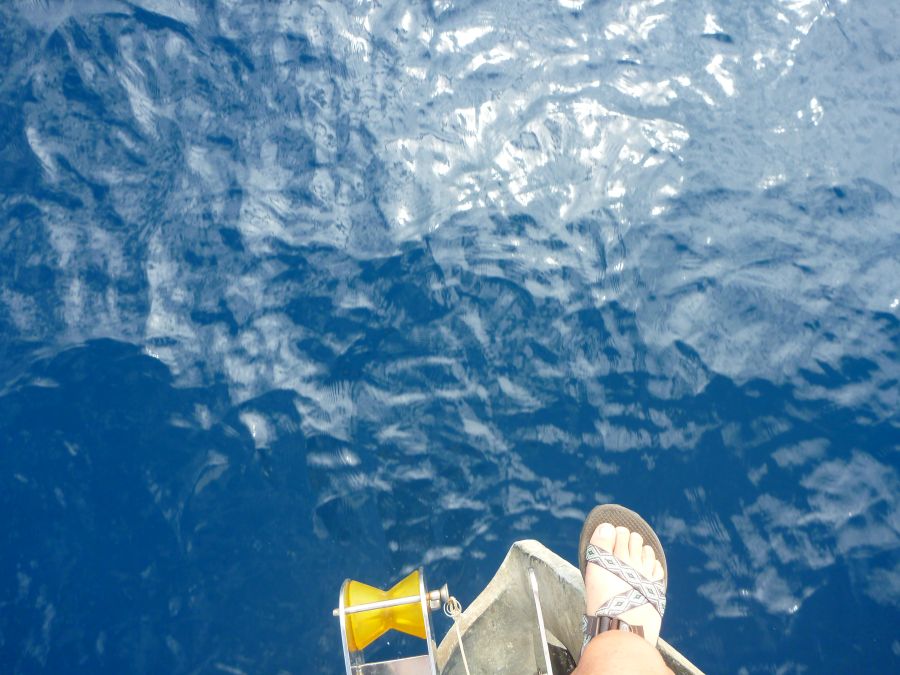 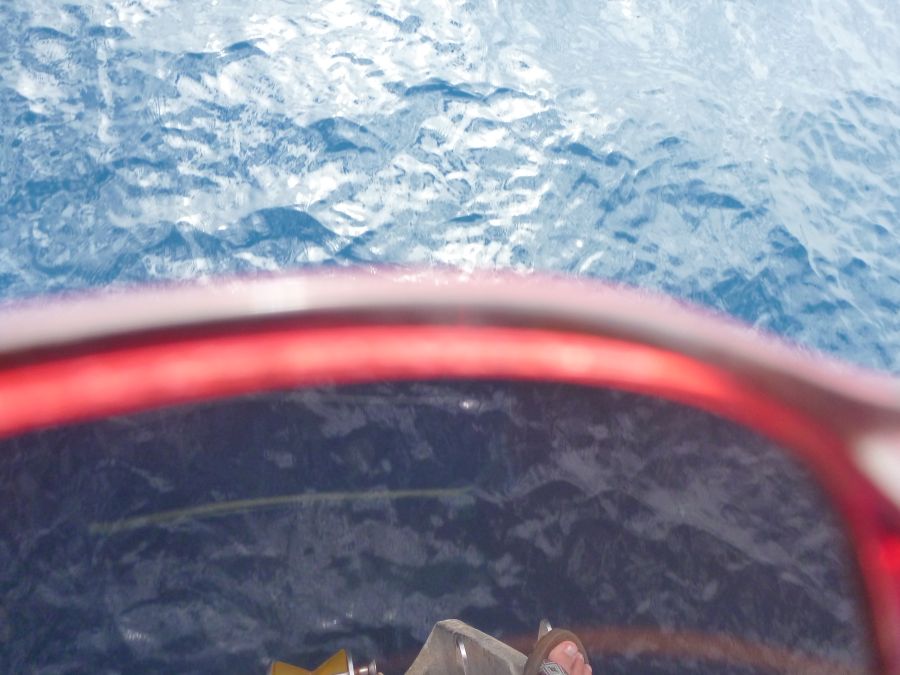 Much better with sunglasses!

and they allow much better discrimination of the sorts of things I'm looking for - subtle (sometimes not so subtle) gradations in water that signal shallow water or coral - than do non-polarized sunglasses.

Here are a couple of pictures of the same spot taken without sunglasses, and through my polarized sunglasses:

A photo of a shallow reef area. 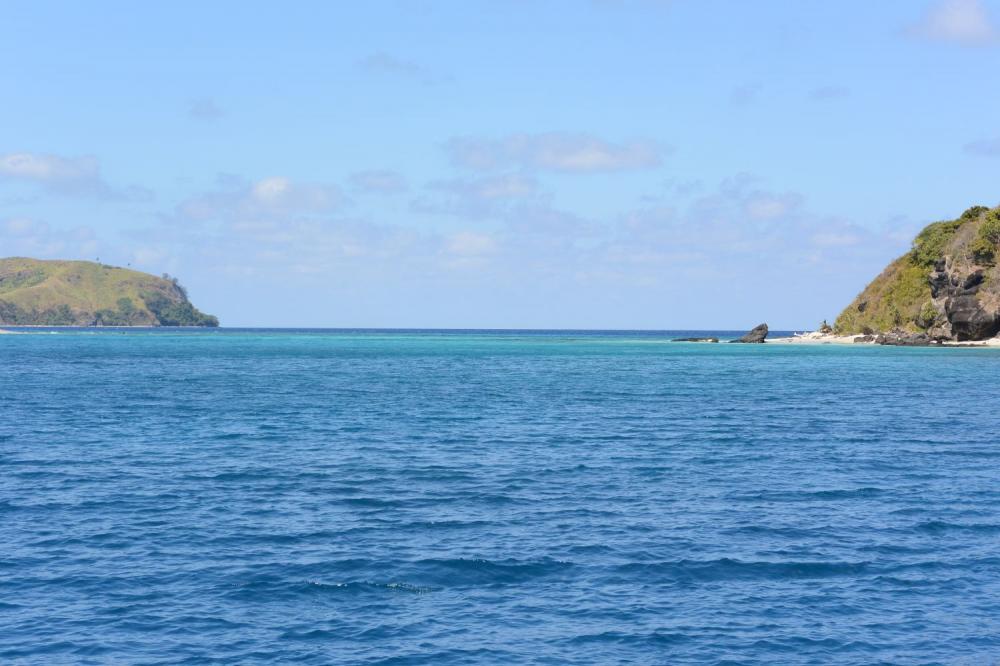 A photo of the same area taken through my polarized sunglasses. 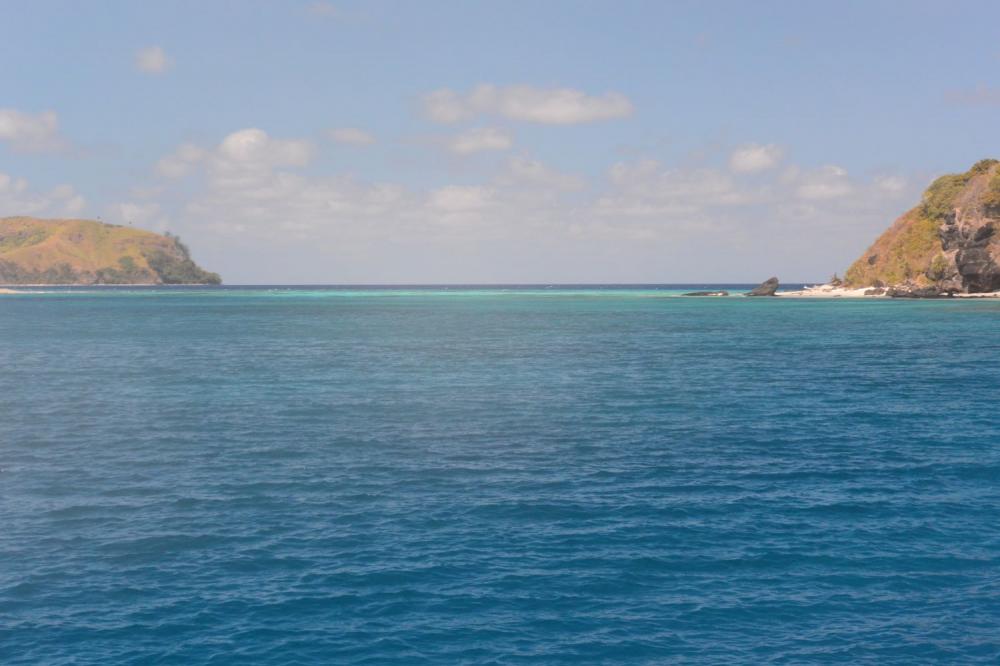 Notice how the color differences are more pronounced, when viewed through the sunglasses. I don't have any photos to show the difference in views between my regular sunglasses and my polarized ones, but I've done the experiment and I've determined that my color discrimination is better with the polarized lenses, so I always wear them when I'm on duty as the Lookout.

Though turquoise water is lovely to be anchored in, I prefer blue water when we're sailing. Blue water equals deep water equals safe water. As the water gets progressively shallower, it gets progressively lighter..dark green water up ahead is still okay; light blue is less ok; turquoise or bright, light green water (which I call "OMG green") get my immediate attention and merit a radio call to Eric, to have him confirm that there is, in fact, a shallow area or reef shown on the chart where it looks like there is one.

The shallowest water of all is a light tan color, indicating coral near enough to the surface to show through. It's the least water you can have, without being dry land. Sometimes, in fact, it's just "wet land." You really want to avoid light brown patches of water.

When seen at a distance, these color variations usually take the form of a thin line at the horizon. A patch of shallow water at half a mile, for instance, would look like a thin light blue, light green or turquoise line riding atop the darker blue of the deeper water. It may be the edge of a huge reef, but all I can see is the edge. By the time the reef begins to show a shape, we're close enough to it that we should have already known its location for awhile.

Most of the time, when I call Eric to confirm a reef or an area of shallow water that I see, he's already seen it on the chart. But one time, the thin line of light blue water I saw up ahead wasn't indicated on the chart as being shallower than the dark blue, seventy-foot-deep water we were in. It was too extensive to go around, crossing our path as far as I could see to left and right, but as it wasn't OMG green, it was probably going to be deeper than our keel. Also, as this was smack in the middle of an area with lots of boat traffic, we hoped that any obstructions would most likely have been discovered long ago and placed on charts or at least marked with a floating buoy. Still, we reduced speed and proceeded very carefully, Eric watching the depth gauge as I hung out over the pulpit watching for any coral heads that we might have to swerve around. Eric called out the depths about once a second as we approached, and then floated over, the light blue patch: "Seventy feet...seventy feet...twenty-five feet!" In the space of a heartbeat, the bottom had risen forty-five feet! The depth remained at twenty-five feet as we crossed the light blue water. I could see rocks and coral on the bottom, but no coral heads loomed out of the depths to trip us up. A couple of minutes later, we let out our breath as SCOOTS slid back into dark blue water.

I also pay attention to subtle (or not so subtle) alterations in the flow characteristics of the ocean's surface, that could indicate shallow water, reefs, or even isolated rocks lurking beneath the surface. A white line of distant breakers is often my first hint that there's a reef up ahead, spotted way before I could hope to detect a color change. Submerged rocks will sometimes cause the surface water to swirl; swirly water is best avoided.

Breakers (indicated by arrows) in the distance indicating the location of a reef.

This is all well and good in sunny weather with calm seas. It's a lot harder trying to make these observations in choppy water, or when clouds have turned the surface of the ocean to a uniform steel gray, conditions that occur quite often. So you can see why we value our redundant charts and waypoint tracks.

The charts we use have been pretty good - though not perfect - about showing the locations of shallow areas, and features that we could hit. As an added enhancement, we overlay our boat's GPS position on satellite photos, which show shallow areas and reefs in colorful detail.

To provide further comfort - especially when it's cloudy, or the wind has kicked up waves that obscure the color gradients, or it's raining and I can't see anything, let alone colors - we have tracks. In addition to sharing their warnings and wisdom, cruisers who've sailed these waters before us have recorded their GPS tracks and shared them with us and other cruisers. Once we've imported the tracks into our electronic chartplotter, all we have to do to safely navigate our route is to follow their waypoints - displayed like so many digital breadcrumbs - for the same route. We don't have tracks for everywhere we sail, but we have quite a few. We're also saving our own GPS tracks, which we'll be able to share with other cruisers.

Here is an example of a track we followed in the Yasawa Islands. The white squares with a circle in the middle are GPS waypoints; the blue line is the track connecting them. Blue and purple circles with X's in them, and asterisks, indicate rocks; blobs of blue and green indicate areas of shallow water and/or reefs; brown is land. 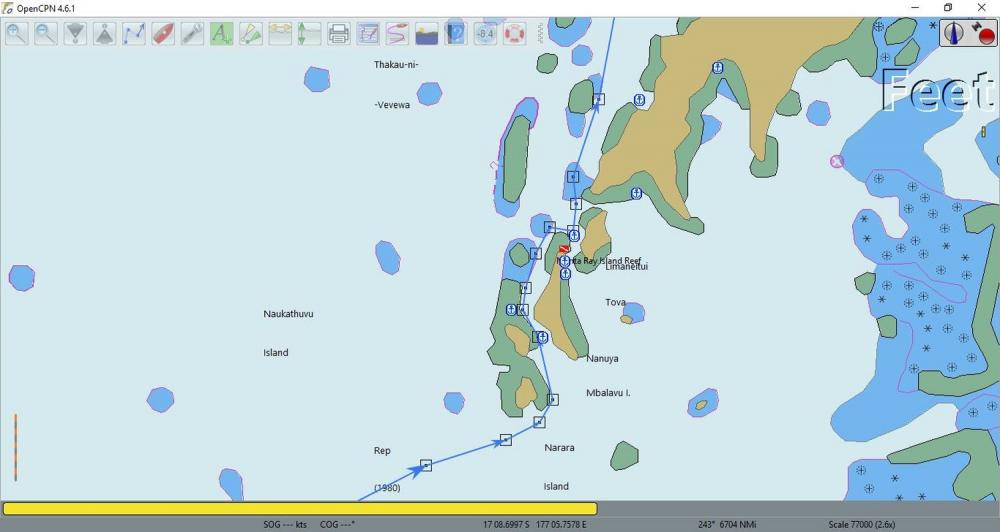 As I stand on the front of the boat for hours at a time, watching intently for things we might hit, my mind can tend to wander, even as my visual attention is focused on the horizon. During one of these extended Lookout sessions, I created a scale of attentiveness that I call the ReefCon scale, based loosely on the Norad DefCon scale. When we're cruising someplace for which we have no tracks, scant depth information, we're near reefs or areas of shallow water, or perhaps the sky is cloudy and the water is streaked with whitecaps, I'll be at ReefCon 5: fully focused, continuously scanning the horizon for any indication of danger. Different sets of conditions will merit ReefCon levels of 3 or 4, at my discretion. (My scale, my level assignment.) If we're following someone's track, though, I back off to ReefCon 2.

Eric once asked me, "Why wouldn't following someone's track be ReefCon 1?"

I'd had a lot of time, up there on the bow pulpit, to think about the levels of my ReefCon scale, so I was ready with an answer. "ReefCon 1," I told him, "is when we're anchored. I'm still paying attention to our surroundings, but much less than when we're moving. When SCOOTS is snug in a slip in a marina, I'll relax to ReefCon 0."

Eric just smiled and shook his head in the friendly, disarming way that he's been responding to my goofiness for more than three decades.

But in spite of this bit of goofiness, we take navigating very seriously, and we'll keep following the Prudent Navigator's lead.