Birds, views, beers, kauris, and even a bit of chocolate First of all, as of June 19, yes, we're still in New Zealand. Second, we're hoping to head north later this week. Crossing our fingers that the weather holds so that we can actually leave.

While waiting here at Marsden Cove Marina for the past few weeks, we've had a lot of fun with the crews of s/v Zoonie (Rob & Barb) and s/v Tregoning (Alison & Randall), as I mentioned in our previous blog post.

Last weekend, the six of us rented a minivan and went on a day trip. Our first stop was the Waipu Wildlife Refuge, a coastal inlet about a half-hour's drive south of Marsden, for a bit of birdwatching. With more than half of us being avid twitchers, the day's collection of 21 bird species that showed up (including some with enticing names like paradise shelduck, royal spoonbill, variable oystercatcher, sacred kingfisher, welcome swallow, bar-tailed godwit, and australasian swamphen) provided quite a bit of exuberance, with each of us spotting at least one new species for our NZ bird lists - or life lists. 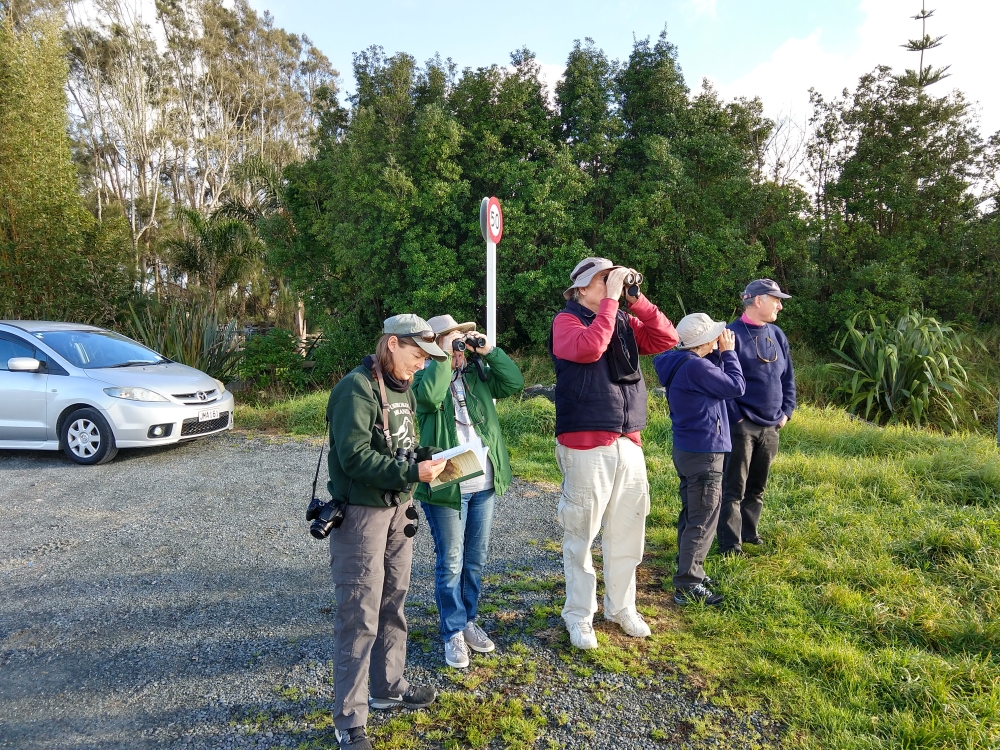 Our next stop was the coastal cliff walk at Mangawhai Heads, another twenty minutes south of Waipu. Though four of us had been here earlier in the year, Alison and Randall hadn't, and the rest of us were happy to return for another go. The day was warm and clear, and the view from the top of the cliff was stunning. 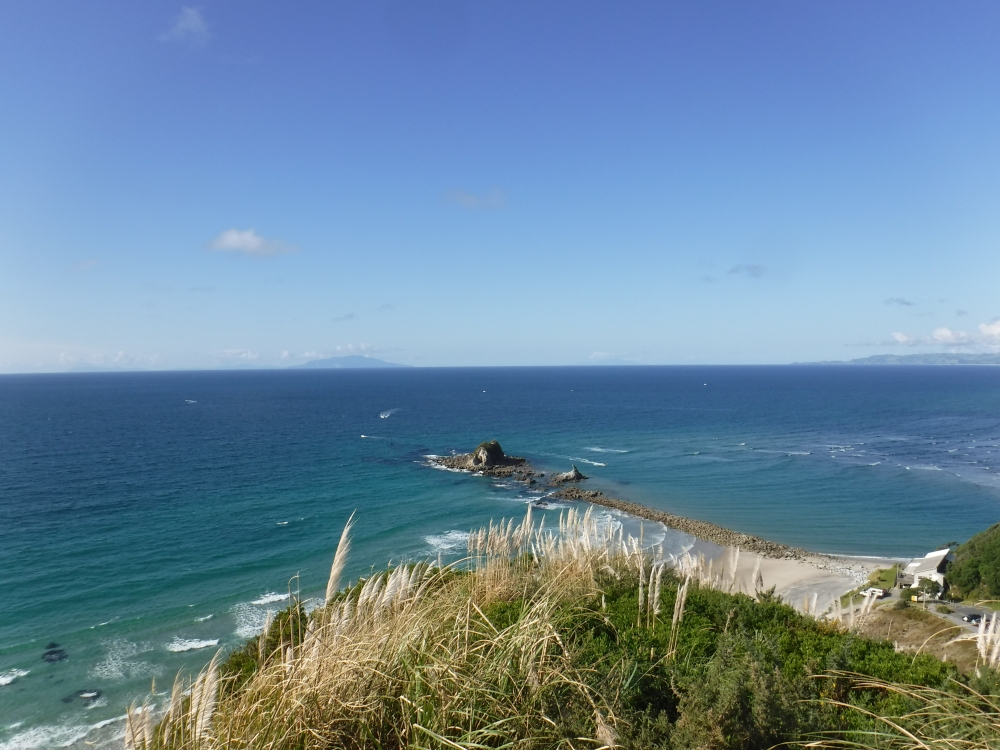 The view out to sea

By now it was lunchtime and after all that twitching and hiking we were all ready for something to eat. Alison had read about a place called the Historic Mangawhai Tavern, which sounded interesting, so we headed into Mangawhai to check it out. We found the tavern, situated as it has been since 1863, on the edge of the Mangawhai River. Hitching posts still stand out front, in case you want to tie up your mount. Inside, although the building itself was historic, the food was fresh, and the beer was refreshing. A great place to eat! 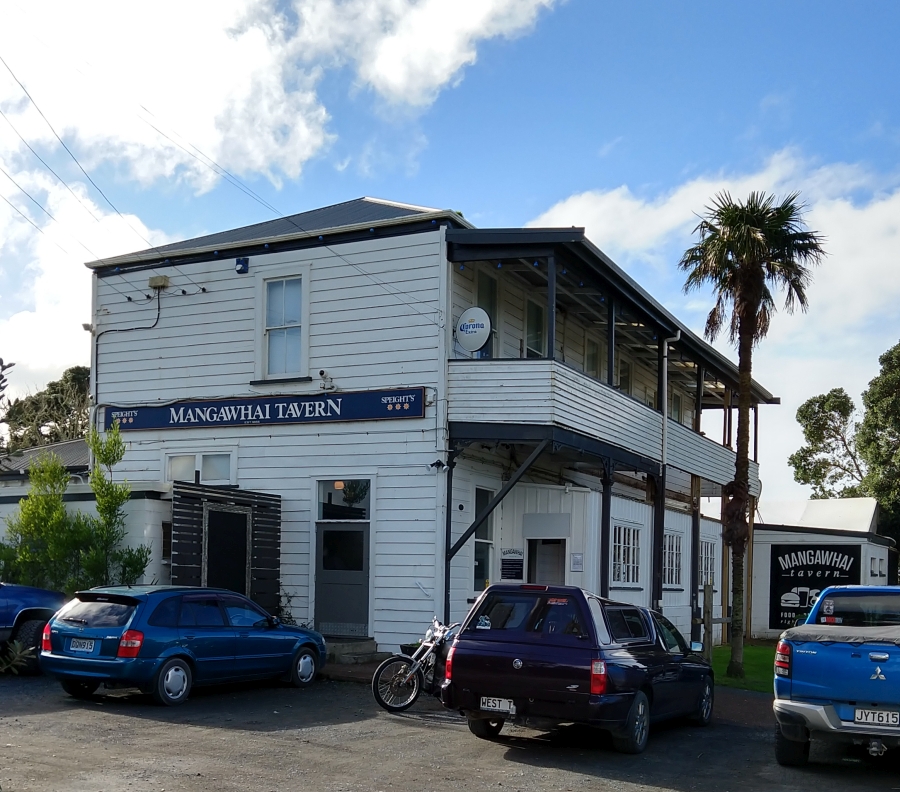 Historic Mangawhai Tavern, note the hitching posts out front near the palm tree

Alison had another gem up her sleeve for dessert. Just up the road was Bennett's Chocolatiers, a boutique chocolate shop. Entering the shop through a huge glass panel door that was hinged in the middle, rather than at one edge (really cool!), we found ourselves in a chocolate wonderland. With such intriguing chocolate flavors as Mangawhai sea salt caramel, chilli spice truffle, and strawberry and balsamic, it was hard to decide what to get. Eric and I left with with nuggets of crystallized ginger in dark chocolate, a box of ten assorted flavors of chocolate, and a chunk of macadamia nut block that had to be broken off the large slab with a hammer. Alison had also bought enough "Fairy Tern Eggs" - confections resembling the endangered native bird that nests on nearby beaches - for each of us to enjoy one. With proceeds going to further the preservation of this species, the "eggs" tasted good AND did some good. 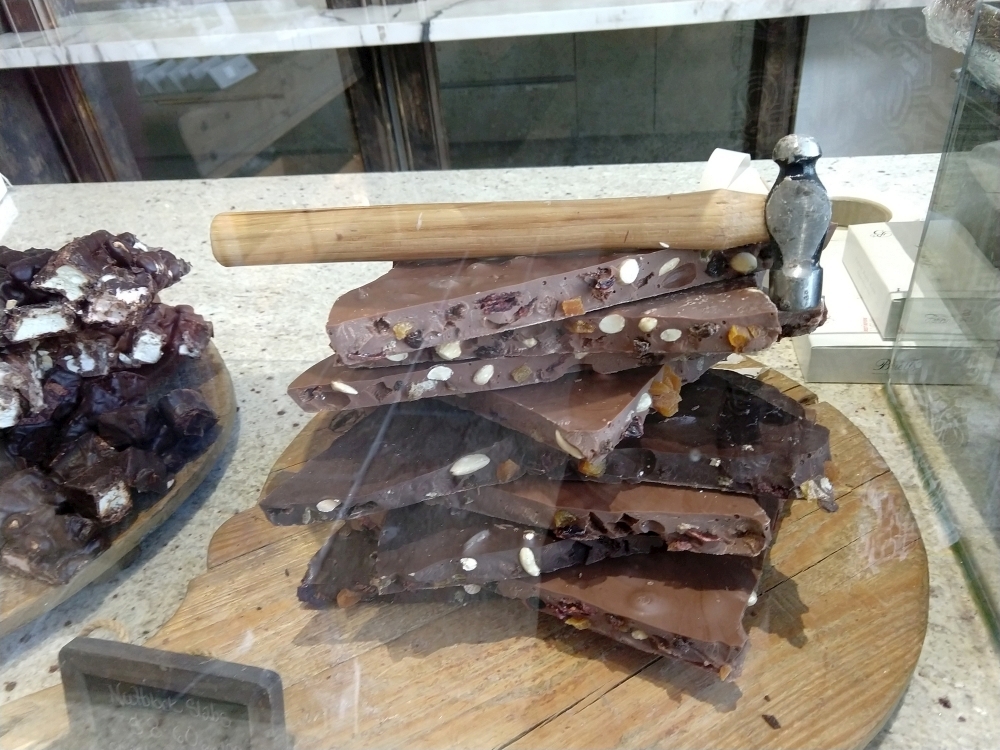 Now thoroughly amped up on sugar, we headed west across the North Island to the little town of Matakohe, home of the Kauri Museum. Kauris are native New Zealand trees that have very dense wood, can grow to be over 50 meters (164 feet) tall, with girths to 16 meters (52 feet) around, and can live for more than 2000 years (metric and English being the same). That is, if they weren't cut down for lumber first. Sadly, for many years, the NZ kauris were logged in a destructive, take-everything fashion, parallel to the logging practices that decimated those other huge, long-lived trees, the redwoods. And with the same result: the once-extensive kauri forests, most of the kauris, and all of the really big kauris, are gone; the remaining kauris are now protected. 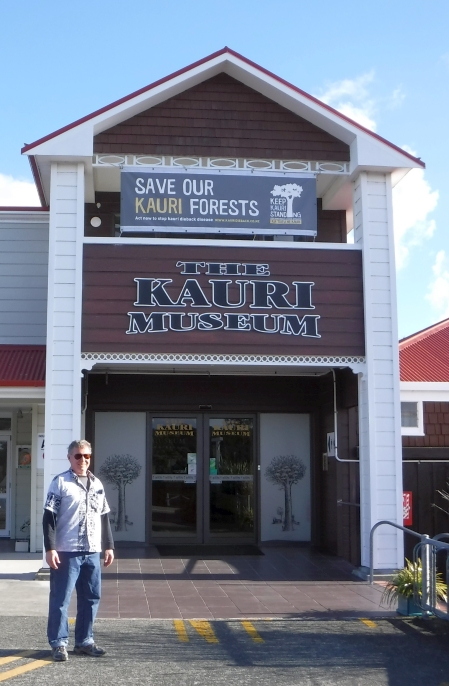 In addition to being harvested for their wood, kauri trees were also bled for their thick sap (called "gum"), which was manufactured into varnish, used as a fire starter, or chewed as chewing gum. Fossilized, solidified gum, which is similar to amber, was also dug up out of swamps. An entire industry called "gum digging" evolved to find and extract these chunks, with many of the gum diggers being Dalmations - not the dogs that bedevilled Cruella, but Croatians who had originally come to New Zealand to work the gold fields in the 1860s.

Though we expected the Kauri Museum to be a quaint endeavor, it was anything but. The museum, which included interesting and detailed displays involving all aspects of kauri harvesting, gum digging, pioneer life, machines, and more, stretched out into numerous wings, and even contained one huge room full of thousands of hunks of polished and carved fossilized gum. The two hours we spent wandering among the exhibits wasn't nearly long enough to absorb all the museum had to offer.

One thing that we thought was pretty neat, was that each of the mannequins in the exhibits was created to resemble a particular person who had been alive during the time.

Done with our sightseeing, we headed back to Marsden Cove, our day replete with new bird sightings, lovely scenery, tasty food, gourmet chocolate, pioneer culture, and, best of all, the wonderful camaraderie of friends.
Comments
Newer Older
Contents