A rainbow framing our view of the port of Suva

While at sea, a day before making landfall in Suva, we were able to do some preliminary examinations of Yanmar the Magnificent's raw water difficulties. First let me set the scene: SCOOTS was encountering 3.5 meter (10 foot) waves from one direction and 2 m (6 foot) waves from another, sailing in about 20 knots of wind. Not exactly smooth sailing. Access to Y the M was via the engine room or through a hatch set into the wall of the aft cabin (where we were sleeping), depending on which parts we needed to get to.

[For those readers who wouldn't enjoy embarking on our whole mechanical and plumbing diagnostic journey of discovery, I've included a summary at the end for you.]

Eric was hopeful that the cause of problem was the raw water pump losing its prime. Back in April, when we'd installed a new transmission oil cooler, the raw water pump had lost its prime, resulting in the raw water alarm blaring. Back then, we'd fixed the problem by pulling off one end of the the raw water hose and filling it with water, to prime the pump. Now imagine Eric sitting cross-legged on the engine room floor of our constantly-moving boat, trying to pour several cups of water from a red Solo cup into a one-inch hose. He got it done, and rinsed some of the floor in the process, but sadly, this time priming the pump didn't fix the problem.

This left two possibilities: (1) the raw water pump was shot, and (2) there was a blockage in the raw water system. We were confident that the impeller was okay, as we'd just installed a new one about a month earlier. Into the aft cabin we went. We folded back our mattress and took off the hatch in the wall, so we could access the starboard side of the engine, where the raw water pump resides. Eric removed the face plate of the raw water pump and when I started Y the M, he could see the impeller turning and that its blades were intact. So that wasn't the problem.

At this point we also knew for sure that we were going to have to sail into Suva Harbour and anchor under sail. I wrote about that adventure in the last blog installment.

Now, anchored in Suva Harbour, and after sleeping from 7pm to 7 am - we were dog-tired from our passage and arrival - we began our diagnosis of Yanmar the Magnificent's malady. We spent the entire day taking things apart, and pulling off hoses, sucking or blowing through them or pouring water into them to check for blockages. As each hose was exonerated, Eric would (half)jokingly proclaim that the seacock must be plugged, and suggest that I go for a dive under the boat to check whether the engine inlet was clear. No thank you. Not in dirty Suva Harbour. Each time he brought it up, I came up with another hose we still needed to check. He even tried to convince me that a mussel had taken up residence in the seacock; when its shell was closed, water flowed in, but when its shell was open, it blocked the flow. Yeah, right. We eventually determined that all of the hoses were clear AND that the seacock was working just fine.

We opened the raw water strainer and cleaned it, though it wasn't that dirty, and began checking its connecting hoses for blockages. All the rubber hoses were clear; all that was left was the stainless steel elbow connecting the strainer to the hoses. When we took off the elbow, we could see that two or three jellybean-sized chunks of zinc (pieces of former sacrificial zincs that protrude into this metal elbow to protect Y the M from corrosion) had lodged in the narrowest portion of the pipe, blocking the orifice. Aha! When we removed the zinc nuggets, water flowed freely through the system. Blockage found!

Cool! Back in business...right? Well, not so fast.

Early on in our blockage quest, we'd removed one of the air cooler's covers, and were surprised to find several chewed-up impeller blades, evidence of some destructive raw water pump event that occurred before we owned the boat. 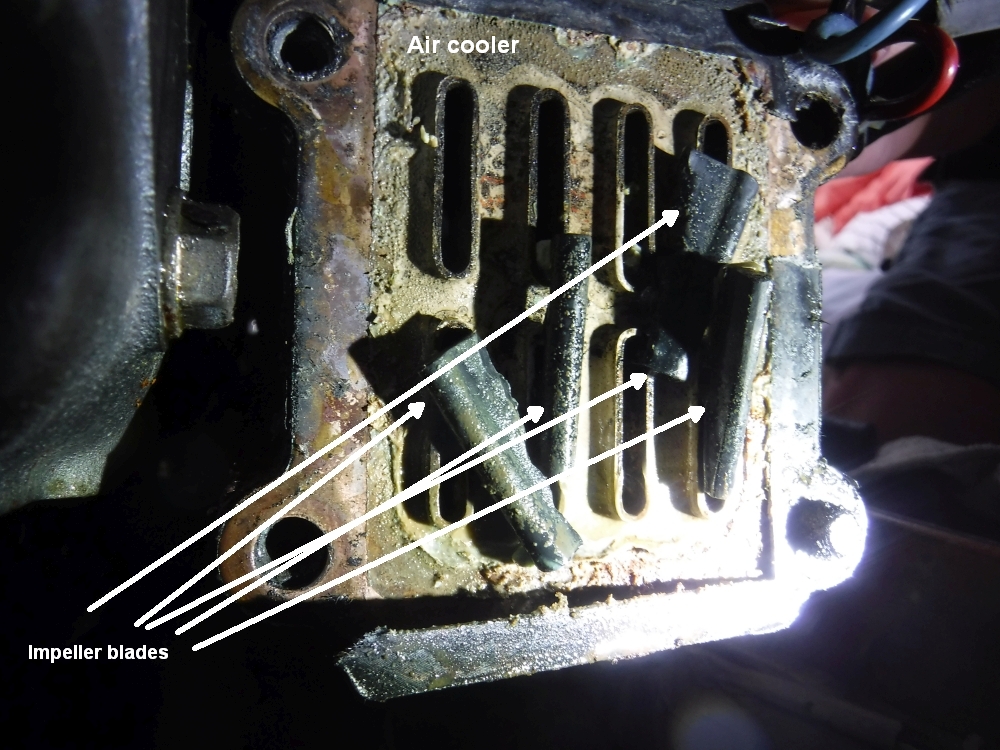 We removed the blades, which weren't causing a problem, but later discovered a BIG problem when we ran the raw water to check that all the hoses were clear: air was blowing out of the water side of the air cooler, indicating that salt water and air were mixing in it, spraying salt water into Y the M's cylinders along with the air. Not good.

How long this had been going on, we didn't know. And we wouldn't have even discovered it, if it weren't for the blockage in the raw water system, which, on the other hand, was easily detected. The air cooler couldn't be repaired; it needed to be replaced. Sadly, we didn't have a spare on board.

Eric got online and began sourcing a replacement air cooler, eventually finding a distributor that could - after a three-week lead time to get the part from Japan, and a couple thousand dollars - ship one to the Royal Suva Yacht Club, where we can dinghy over and pick it up. So, for the next month or so, while we wait for our part to arrive, we'll be hanging out in Suva Harbour.

PS. In the interest of wanting to be able to motor out of any situation that requires it, we've rigged a bypass around the old air cooler. Employing a C-cell battery and a wine cork to plug the two open ends of the air cooler, and a long new hose to reroute the salt water, Y the M can now run if we need him to. (Though we hope not to need him to.) 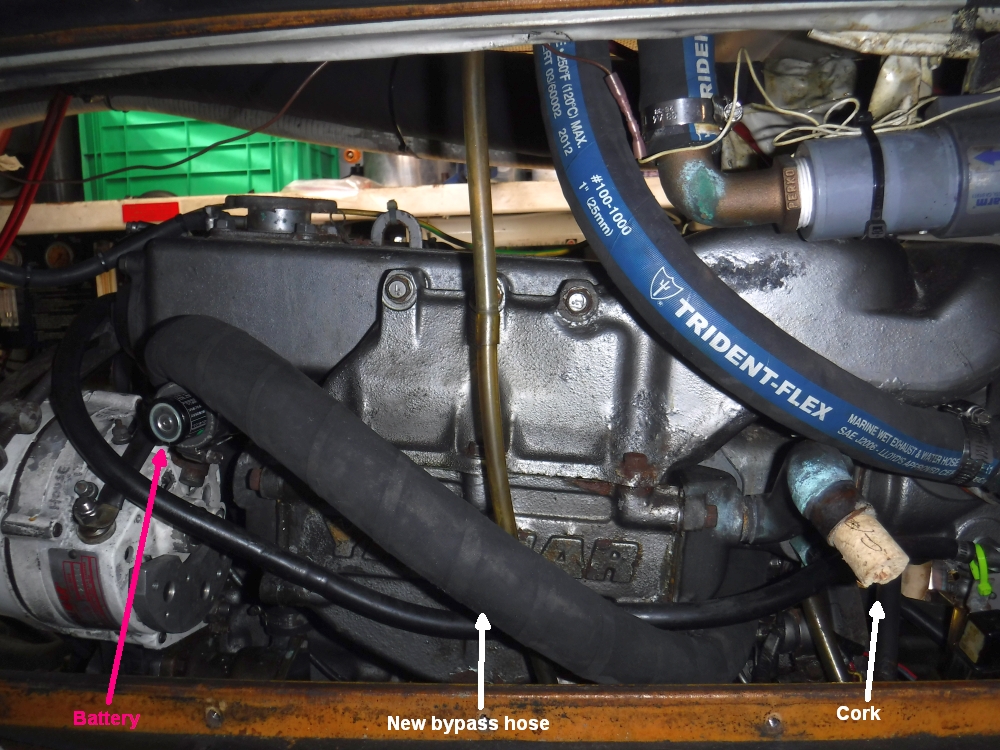 The bypass. Note the battery, cork, and new hose for the raw water. Not particularly classy, but it works.

For those readers who aren't interested in the whole diagnostic process, here is the summary I promised you:

Summary: The blockage in the raw water system was caused by the remains of several sacrificial zincs that had protected Y the M from corrosion. When we cleared these, the water ran smoothly through the system again. We also found that Y the M's intercooler (think radiator) was damaged, the air and water mixing within it. Eric sourced a new one which should arrive here in Suva in about three weeks to a month. We rigged up a bypass of the air cooler so that we can run our engine in an emergency if we need to. In the meantime, we'll enjoy ourselves here in Suva.
Comments
Newer Older
Contents