An abrupt awakening, a mysterious tapping, north into the Koro Sea, lovely Leleuvia Island, and a Fun Fact We awoke abruptly a little before 6 am, springing out of bed in tandem, our highly-tuned and conditioned response to the alarm sounding on our anchor watch program. Eric went to check the display on the tablet running the program; I headed out the companionway to look at our surroundings. The findings: the alarm had sounded because the wind had changed from SE to NE, sending SCOOTS around to the opposite side of the circle prescribed by her anchor chain, outside the tight alarm diameter we'd set; this new wind direction had also aimed SCOOTS' stern toward the sand island and pushed her closer to it - instead of the 55 feet she had been floating in, now she had 18 feet. It was time to go.

After we had a cup of coffee, of course.

A little while later, coffee having been consumed, we pulled up the anchor from the sandy bottom - hooray! No sticky, gooey mud on the chain! - and began motoring away from the island and toward the channel. As I stood in my usual Fiji position at the bow, keeping watch for coral and enjoying the scenery, Eric hollered from the cockpit, "Look over the side and see what's dragging!"

One of the things that yachties do their best to avoid is having things trail off the boat while they're underway, things that might wrap up in the prop. A wrapped prop is a stopped prop, and when your day is going to require you to motor along a reef channel, out a reef passage, into another, and anchor in an area that will most likely require careful navigation under power, you don't want your prop to stop.

Eric had heard something tap, tap, tapping against the hull of the boat, somewhere up forward, as we moved through the water. I quickly looked over the sides (another one of our highly-tuned and conditioned responses) and saw nothing dragging in the water. Taking a look back over the deck, all the rigging lines were accounted for. "Nothing's dragging," I hollered back.

I opened the foc'sle, which is open to the chain locker in the very front of the boat, climbed inside, and listened. Sure enough, I also heard a "tap, tap, tap," on the hull, though I couldn't determine whether it was inside or outside of the boat. It was possible that we'd snagged something in the water that was now trailing along underneath SCOOTS' hull, something that I couldn't see from the deck, threatening to wrap up her prop...

"I'll go in," I told Eric as I passed him in the cockpit, on my way below to change into my bathing suit and gather my snorkeling gear. I couldn't stand the suspense of not knowing whether we were dragging something.

Eric put SCOOTS in neutral - the better to preserve my appendages - and as she drifted slowly in the reef channel, I swam up one side of SCOOTS' hull and down the other and looked across the hull from one side to the other. A few tufts of marine growth - the lucky ones that we'd missed during our scraping extravaganza the previous day - and the coral garden on the bottom of our keel, were the only extraneous things on our hull. No ropes, no fishing line. Nothing.

I climbed back aboard, rinsed with some warm water, and as I was getting dressed, Eric put Y the M in gear again, and we continued motoring along the channel toward the pass near Nukulau Island. We were both really pleased to see that SCOOTS moved along much better, with a clean hull.

We hadn't decided on a destination for our day's travel, but we knew it would be at an island in the Koro Sea. Though we'd originally hoped to go to the island of Gau, almost due east of our position, the wind, coming as it was from the east, would make that a miserable trip. So once out the pass, and around the southeastern corner of Viti Levu (Fiji's biggest island, where Suva is located), we headed NNE, which would take us past a few likely island anchorages. 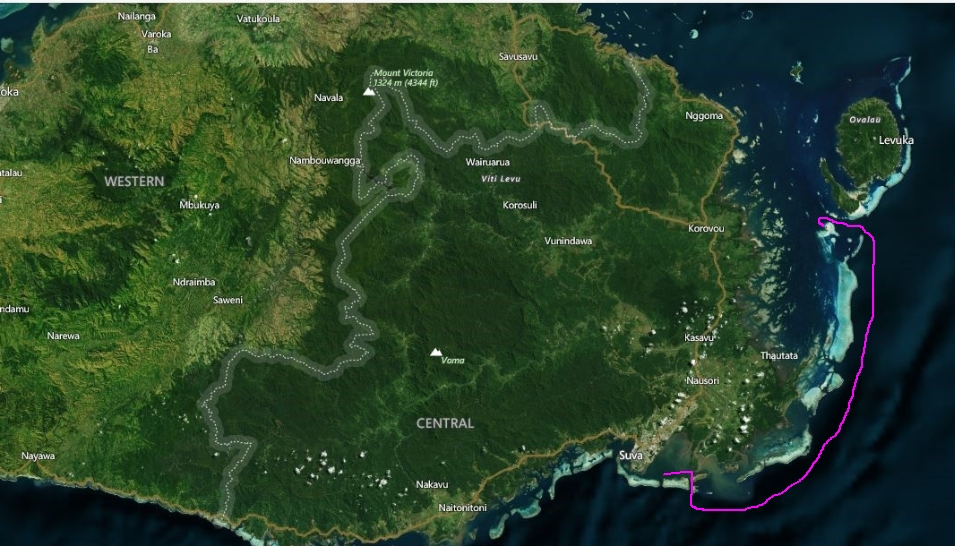 It felt wonderful to be on our way again, out in the ocean, where the small, friendly swells rolled under SCOOTS on their way to wherever they were going. The day was bright, and sunlight sparkled on the water. The wind was too light for us to make good progress under sail alone, but we put up our main and unfurled our jib, and with Y the M helping out, motorsailed at a reasonable speed. 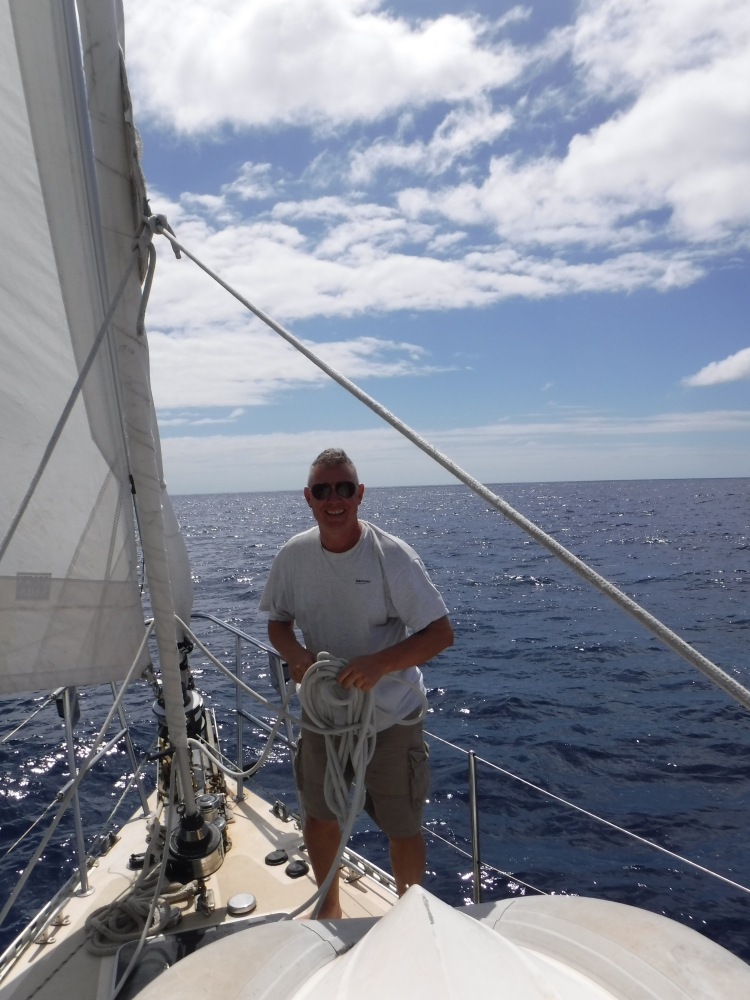 The first possible destination was the island of Toberua, home of the Toberua Resort. Though reports of the anchorage and resort made it sound pretty nice, the island was accessed by way of what looked like a shallow, narrow pass through the reef. As we weren't convinced that our charts were detailed enough to be up to the task, we decided to pass on Toberua.

The next option, another ten miles north, was the tiny island of Leleuvia, also home to a resort. This island was accessed through deep, wide Moturiki Pass, which is traveled by ferries, and covered with plenty of detail on our charts, all of which made us feel more confident about going there. Which we did. 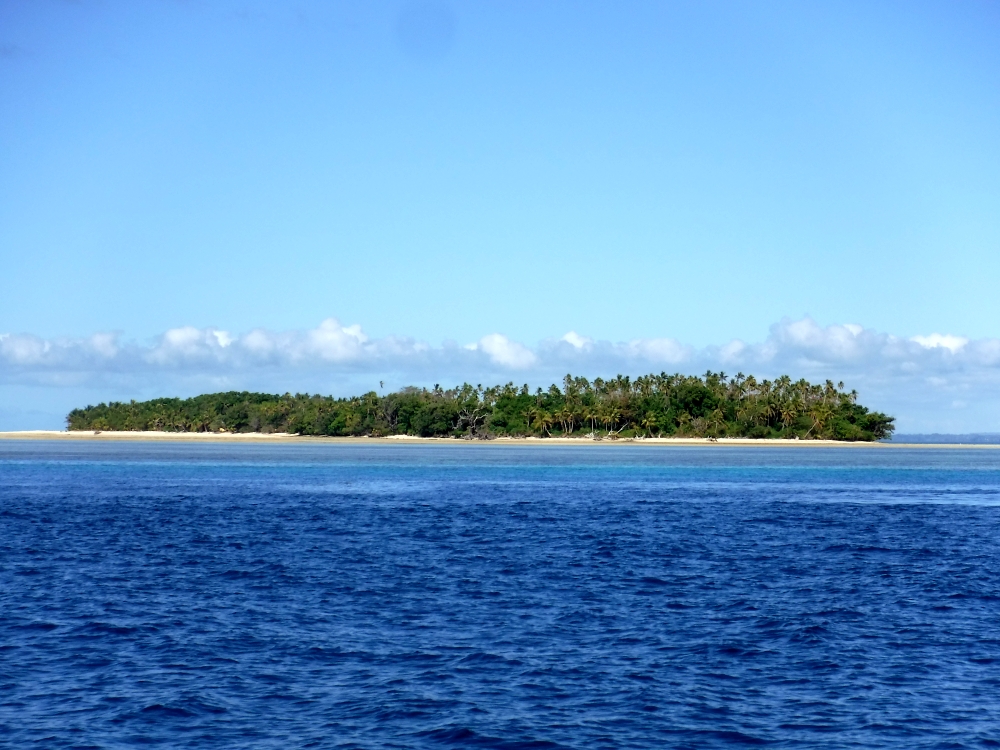 One of our cruising guides mentioned that the resort provides a free mooring, which traveling yachties can use if they call the resort to arrange a small boat to lead them in. Which we also did. This was a good thing, because, while the chart for the pass had a reasonable level of detail, the corresponding chart for the Leleuvia anchorage did not. In fact, looking at the chart, I couldn't see a depth more than 12 feet (SCOOTS draws 6.5 feet) in the anchorage, or a deep, clear passage into the anchorage through the coral. I knew there had to be one, though, because other yachties had been there. Looking at the satellite views of the island and the surrounding area, we saw areas that might have been deep enough. But wow there was a lot of coral, too. 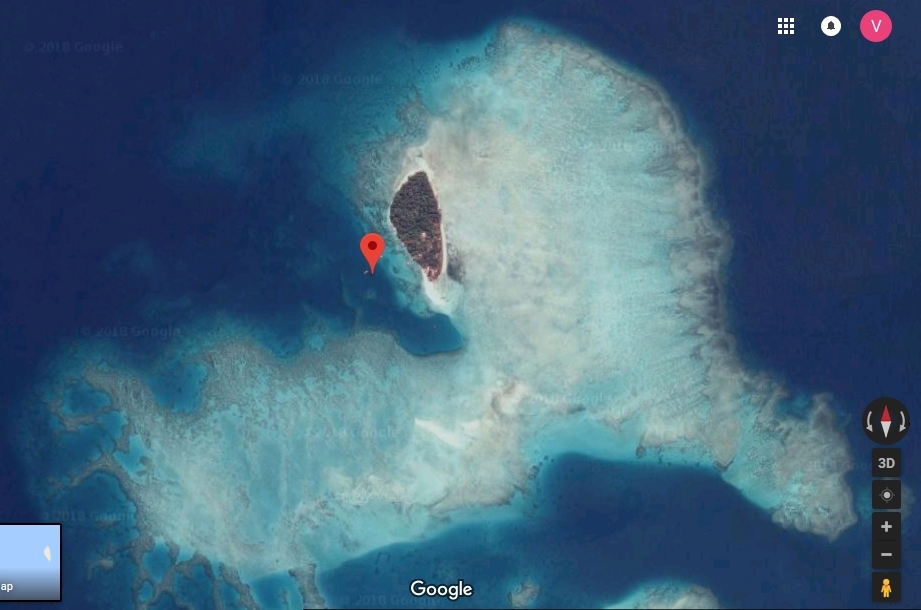 When we got close, and had taken the sails down, we called the resort and two guys came out in a panga to guide us in. I was on the bow, and Eric was at the helm as we went in, the clear water perhaps 20 feet deep, both of us getting good views of the coral bommies (who knew how deep they were?) on either side of our path. We were glad to be laying down a GPS path of our own that we could follow on our way back out. Do you see now why I didn't want to have to worry about our prop getting wrapped?

The panga led us around the island and into the anchorage, where a long swath of 40-foot-deep water (not on our chart anywhere) greeted us and which had us breathing easier. All around the dark blue of the deeper water, though, were miles and miles of tan-and-green coral reefs. The mooring, we noticed, was already occupied by another sailboat. The guys in the panga told us to put our anchor down here and so we did. The water was so clear that we could see the anchor dug into the sand on the bottom.

Anchor down, we set to our arrival tasks - taking down the lazy jacks, removing the main halyard, putting on the sail cover, sending our position report, starting the anchor watch program, turning off the navigation equipment - and then sat down in our "princess chairs" at the back of the cockpit, to enjoy our arrival beers, eager to begin exploring beautiful Leleuvia Island. 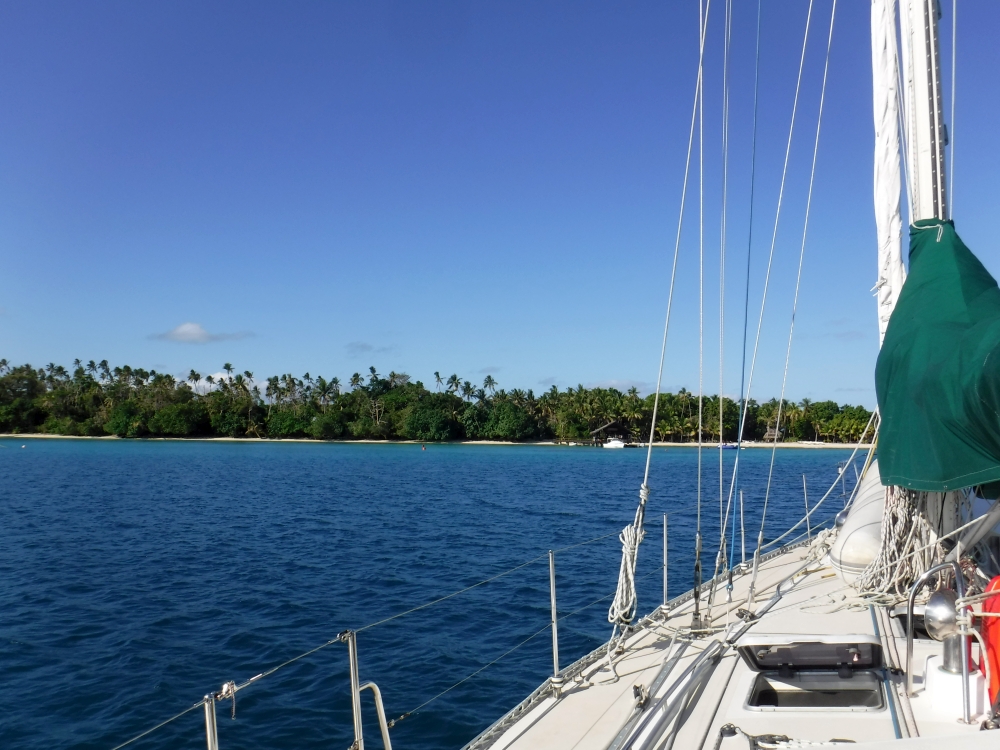 Fun Fact: Tiny Leluvia and its neighbor, equally-diminutive Caqalai Island, are all that remain of a fabled large island, named Vuniivilevu, and nicknamed "Fiji's Atlantis." Native Fijians claim that the island suddenly, mysteriously, and catastrophically disappeared beneath the waves about 800 years ago, taking many of its inhabitants with it. Much of the area is now occupied by Moturiki Pass; upon entering the pass, native Fijians perform acts of respect in honor of the people who perished there. Recent scientific research has substantiated these claims.

PS. We never figured out what was making the tapping noise. It stopped sometime along the way and hasn't returned.
Comments
Newer Older
Contents