Old buildings, a gorilla in the mountains, 199 steps, a strong Fijian dude Every yachtie who'd ever been to Levuka told us the same three things about it:
(1) “It's such a charming little colonial town!”
(2) “The anchorage is rolly as hell!”
(3) “You GOTTA go there.”

So we decided to go to Levuka, to see what all the fuss was about. 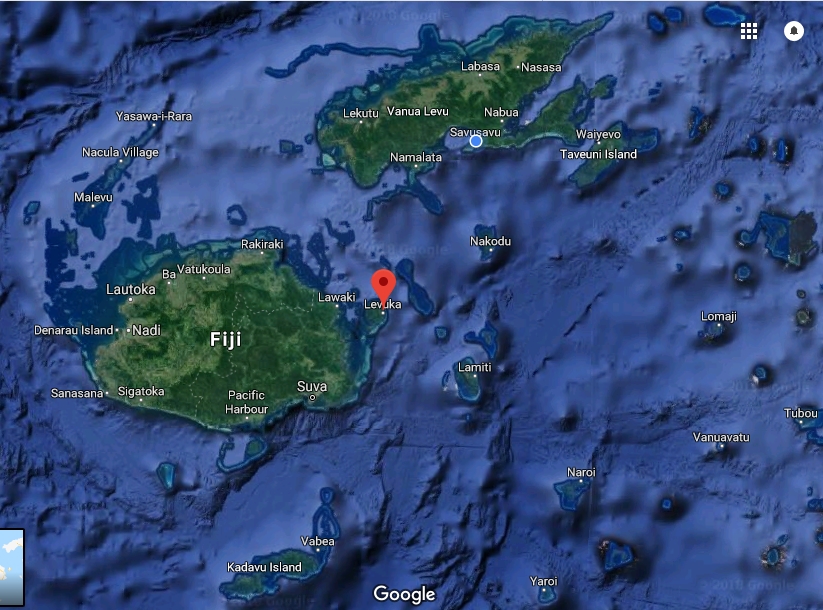 A three hour motoring trip from Leleuvia Island, in almost no wind, brought us to the passage through the reef. We slipped through and dropped our anchor just off the town, in clear, flat-calm water that was undisturbed by even a hint of a wave. Though I could see how this anchorage could be rolly in many weather conditions, we seemed to have hit it just right, and the water was as smooth as glass. 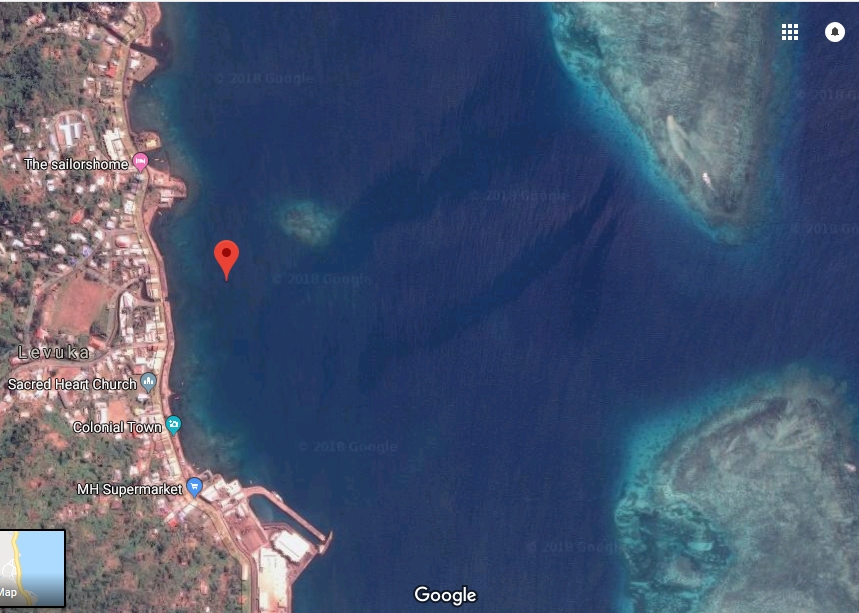 The reef pass and the anchorage

Looking up at the green hills behind the town – which reminded me quite a bit of the bright green mountains of the Marquesas – I saw a huge outcropping that I thought looked like a gorilla. 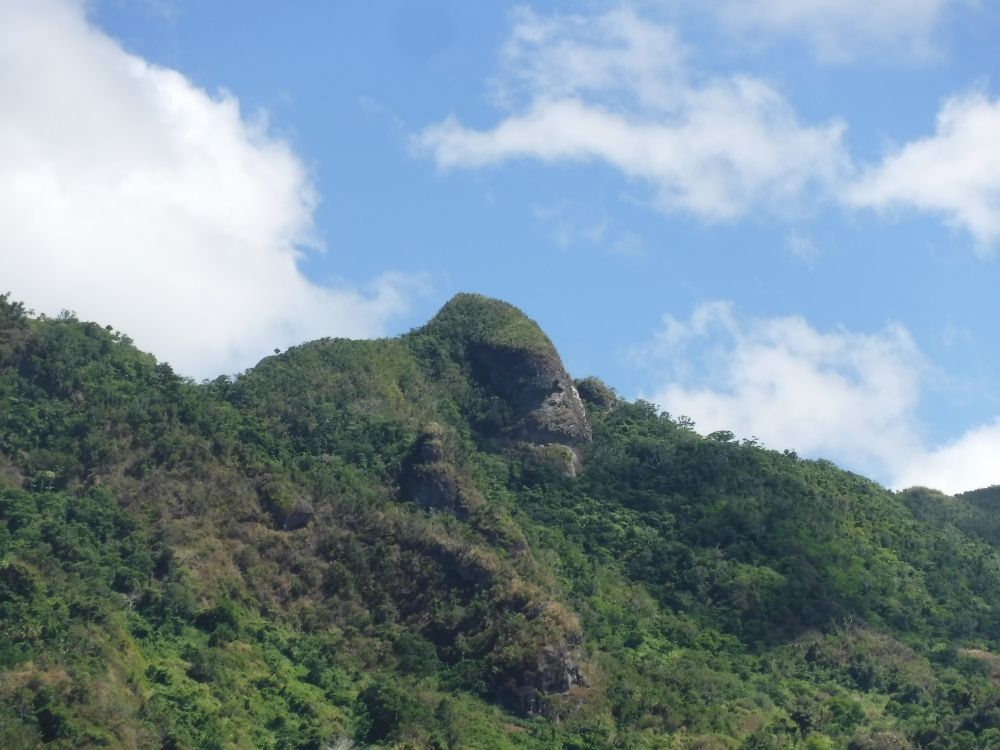 Can you see the gorilla?

After enjoying lunch and our arrival beer, all the while serenaded by the continuous drone of the town's diesel generator, I put on my backpack, we put the dinghy in the water, and headed to the concrete wharf at one end of the harbor, near the Customs building and the fish cannery, ready to do some exploring. I climbed up onto the wharf by scrambling up a pair of old tires that were lashed together, and were hanging down, acting as fenders for some large boat that apparently tied up there occasionally. (Remember these tires, you'll hear about them again.) We tied up our dinghy and eagerly began walking through this town that we'd heard so much about. 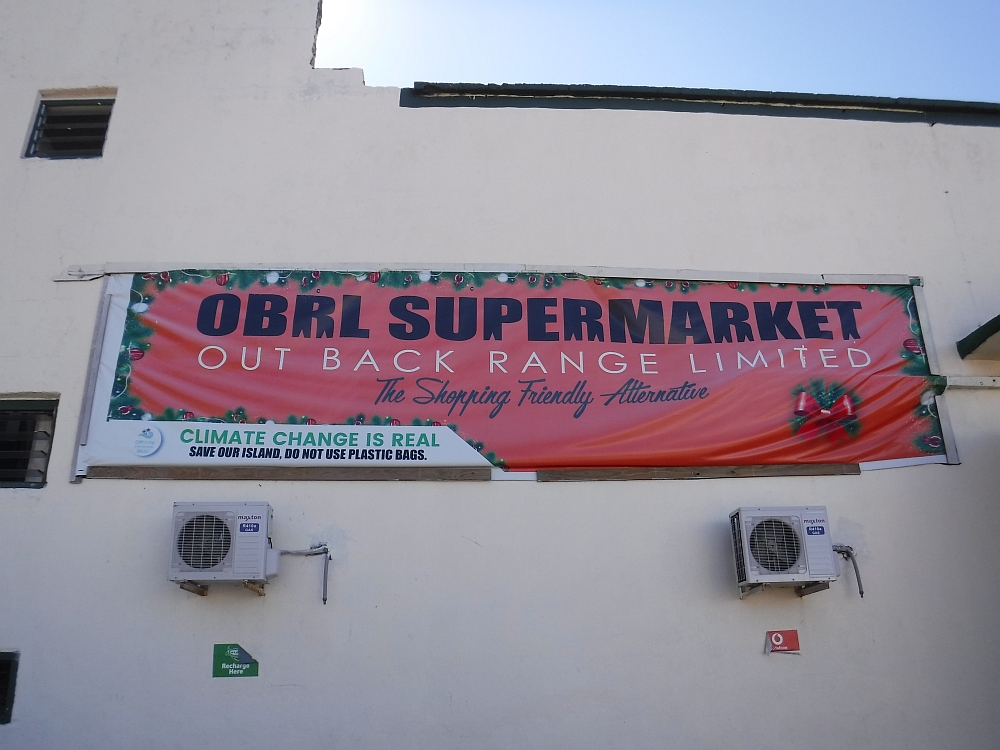 Even the supermarkets in Fiji know that Global Warming is real.

An UNESCO World Heritage Site, Levuka, on the island of Ovalau, is the former capital of Fiji. (The current capital is Suva.) Many of the town's colonial-style buildings are still standing, which is pretty amazing when you consider all the termites that live here, and all the cyclones that have whacked Levuka over the past hundred years. 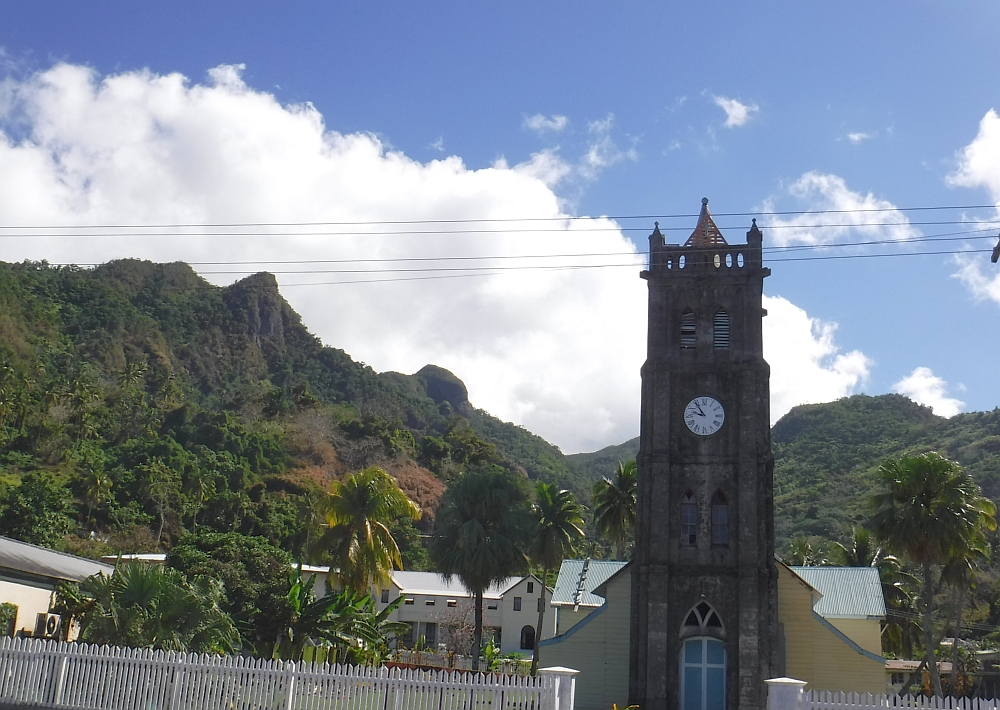 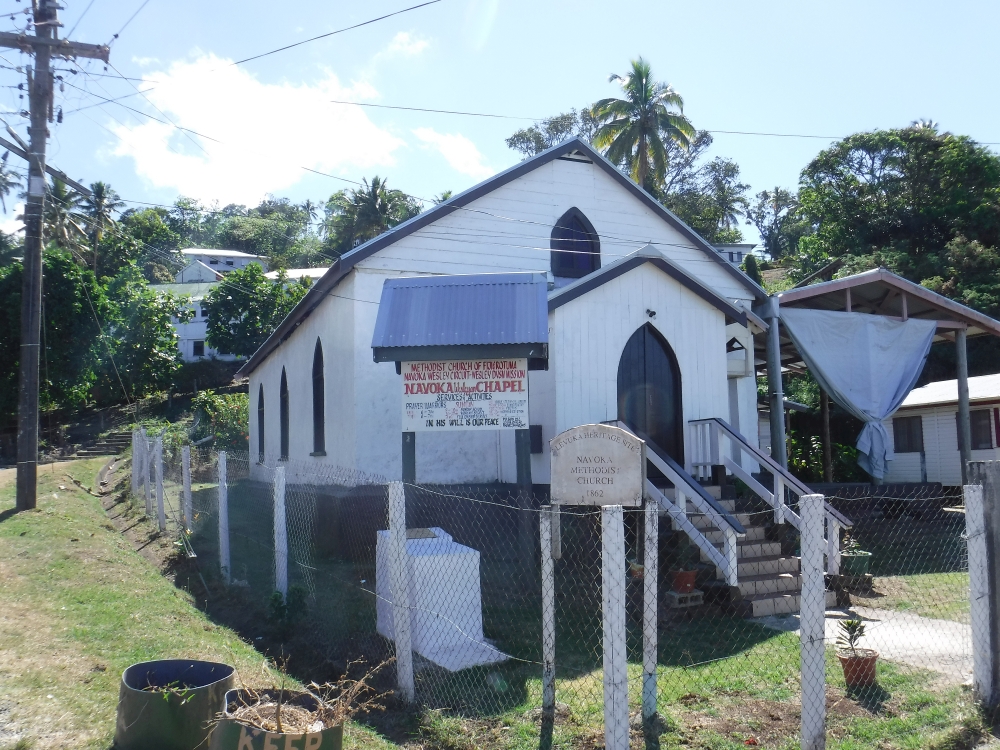 Some of them could be described as “charming,” but overall, I thought that the town seemed “tired,” as if the citizens – and even the buildings themselves – were exhausted from trying to keep up appearances for so long.

We wandered through town, and up the “199 Steps” to the top of a hill, which provided a lovely view of the harbor and the reef beyond. 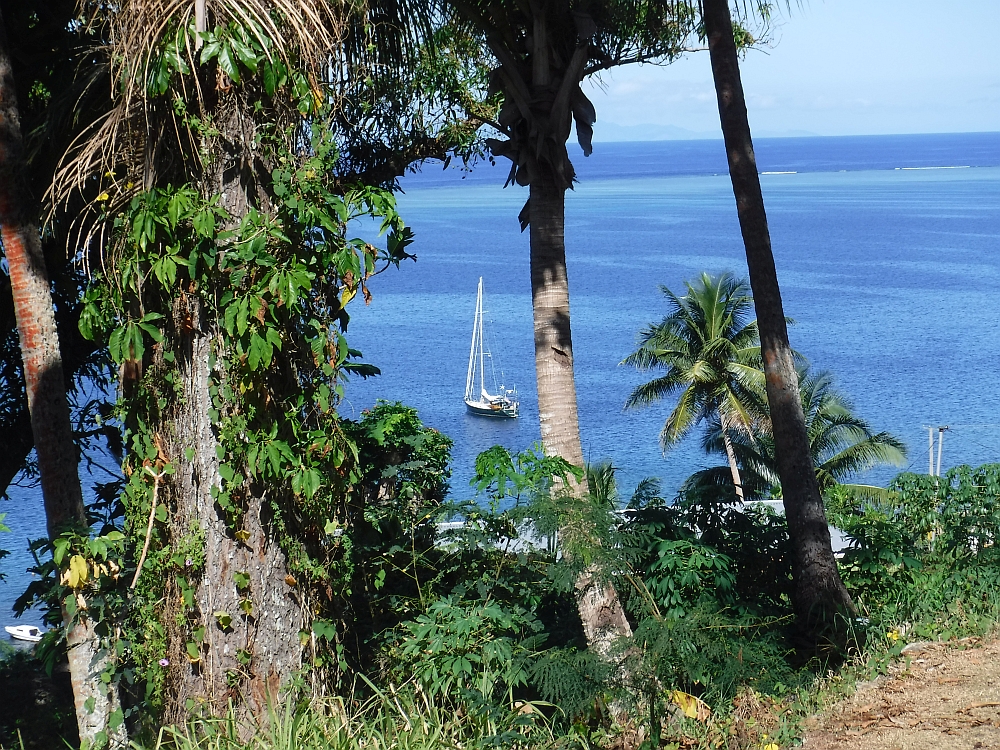 A pretty view from the top of the 199 Steps, of SCOOTS in the anchorage

The day being warm and windless, we spent a while enjoying the shade of a huge mango tree at the top of the stairs, while flocks of birds sang from perches up in the canopy. One hundred ninety-nine steps later, we were back down at the main street. We wandered around through some residential areas, 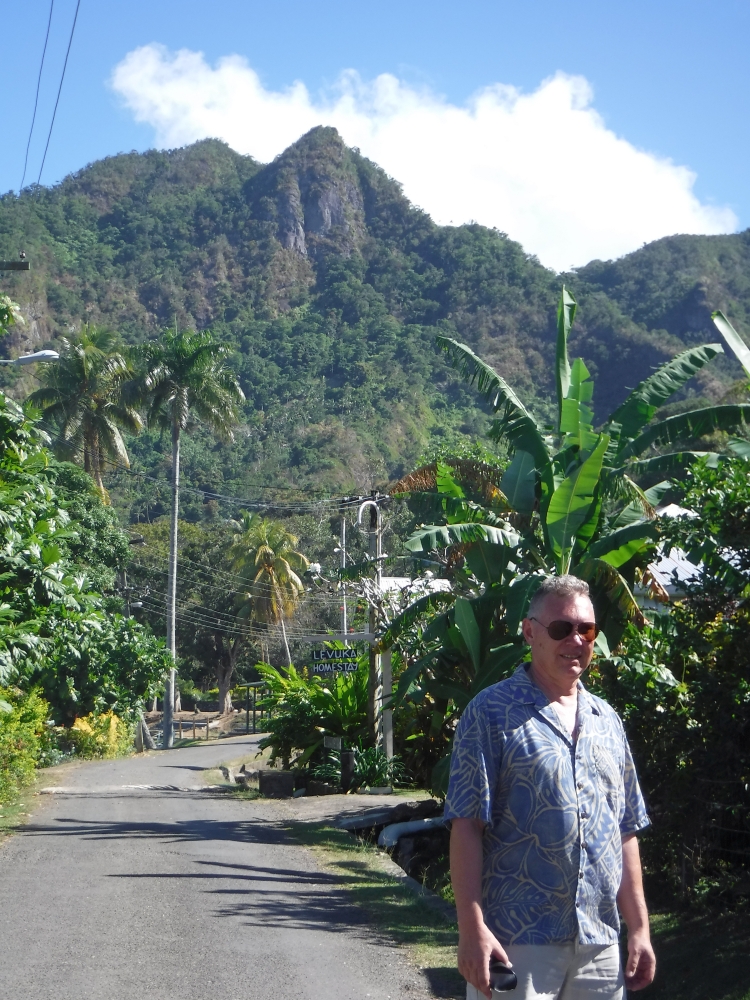 Eric in the 'burbs

where we saw collared lories (smallish parrots decked out in large swathes of purple, red, and bright green), 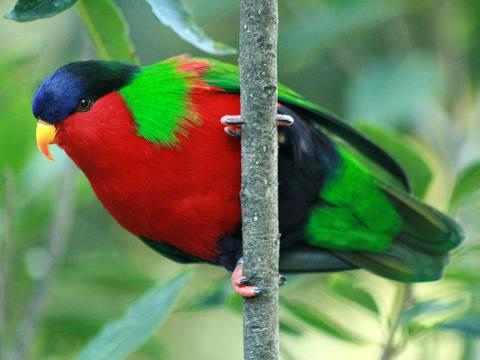 and past a school whose motto was “Lest We Forget,” which we thought was amusing. "Lest we forget what ?" we wondered. 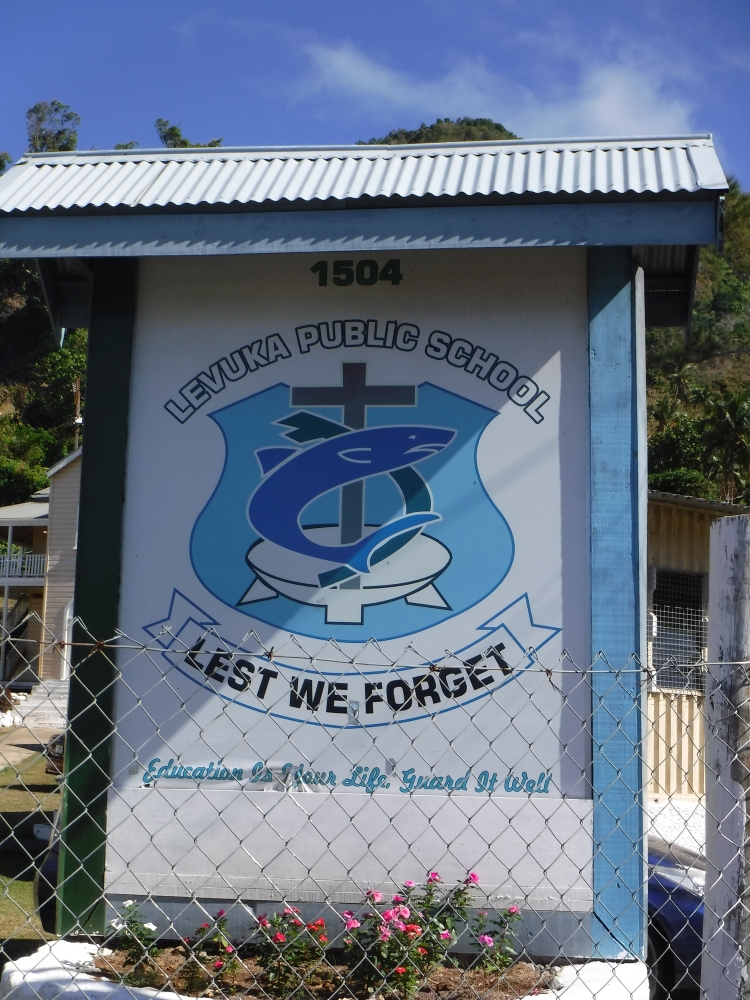 Also note that the school logo is made up of an interesting combination of items: a big fish, a big snake, a cross, and a kava bowl (tanoa)

Later, we stopped into the town's tiny but well-stocked and interesting museum to learn more about the history and culture of Levuka in bygone days.

We thought we might have dinner out, but after peeking into the couple of restaurants that were on the main drag, we were unimpressed, so we returned to SCOOTS, where we enjoyed a sunny and quiet (except for the generator) afternoon and evening in the flat-calm anchorage. Looking over my notes, I see that Eric won all five games of Spite & Malice that day (it's a card game that we play almost daily). Since he'd won at least three out of five games, according to our quirky rules (we spend a lot of time together), I was required to call him “Captain Awesome,” something that I despise doing, which makes it all the sweeter for him. Ugh.

The next morning, we decided to go back into town to get a few essential groceries – eggs being at the top of the list – before setting sail for our next destination. I put on my backpack, we floated the dinghy, and off we went to the concrete wharf. The tide was a bit lower this morning, than it had been when we'd arrived at the wharf the previous day. A panga was tied up near the pair of tires I'd climbed out on the previous day, and four Fijian men were loading large bags of something heavy into it. Eric brought our dinghy in beside the panga, near another hanging tire, this one a single tire. One of the men, a sturdily-built man in his late twenties, came near and offered to take the dinghy painter (the rope that we use to tie it to things) and hold it while we climbed up onto the wharf, a distance of almost five feet (I'm just over five feet tall). As he stood there with the rope, I stood up on the dinghy, grasped the chain holding the tire with my left hand, and with my right hand and forearm bracing myself on the rough concrete of the wharf, swung one foot up and over to the tire, intending to climb up on it as I had the day before.

Let's stop here for a moment and consider the folly of my actions. First, I hadn't considered that one tire hanging from a chain might move more freely than two tires tied together, one on top of the other, hanging from a chain. Second, I hadn't considered the differences in height (the tires were higher today) and position (I was off to the side of the tire today, rather than facing the hole in the middle) between the tire and the dinghy today, versus the previous day. Can you see where this is going?

Okay, let's move along again. As soon as my left foot touched the tire, it swung away from me. My right foot, which was still on the dinghy, pushed it away from me (thanks to Mr. Newton's laws), so that now I was suspended over the water by my left hand (which had a death grip on the rusty chain holding the tire) and my right hand and forearm, which I had pressed down against the rough concrete top of the wharf, hoping that the friction generated as it slowly abraded my skin would keep me hanging there just long enough for Eric to get the dinghy back underneath me, as he was scrambling to do. Meanwhile, my legs were just hanging down over the water, probably thrashing about, because that seems to be what legs do in these situations. I don't know for sure; I wasn't paying attention to them.

“Why not just drop into the water and be done with it, and swim to the stairs at the head of the wharf?” you might ask. “The water was warm, and it was only a few feet below you.” These things are of course true, and I might have done that, had it not been for my backpack, which is not waterproof, and was loaded with all sorts of things that are also not waterproof and would suffer greatly if they got wet. Which they certainly would have, had I fallen into the water.

So do you remember the Fijian guy holding the dinghy painter? He was still there, and instead of just stepping back and enjoying the hilarious situation unfolding in front of him (as some people would have), he put the painter down, and stepped over to where I was dangling off the side of the wharf. Leaning over, he offered me first one hand, which I took with my left hand that had been grasping the tire chain, and then the other, which I took with my right hand, which, along with my forearm, was currently leaving a monolayer of skin cells on the concrete as I slowly slid toward the water. Then, holding both of my hands, and supporting all of my weight, he just stood up, pulling me up and over the side of the wharf, and set me down on my feet. Whoa. That's a strong dude.

(I'm sorry I don't have any photos of this. They would have been great.)

As Eric tied the dinghy to the wharf, I thanked this man profusely, both in Fijian, “Vinaka vaka levu!” and in English, “Thank you so much!” His buddies, who had watched the whole thing from the panga, were laughing uproariously – as well they should have – and we joined in. Then we said our goodbyes and the man climbed into the panga, and Eric and I walked into town to buy those eggs. And maybe also some antiseptic cream.