So many washing machines! When we left Levuka, the forecast for the next few days called for strong SE winds, so we looked for an anchorage that would be sheltered from wind and waves from that direction. We found it in the small bay in front of the village of Rukuruku, tucked into the northwest corner of Ovalau. 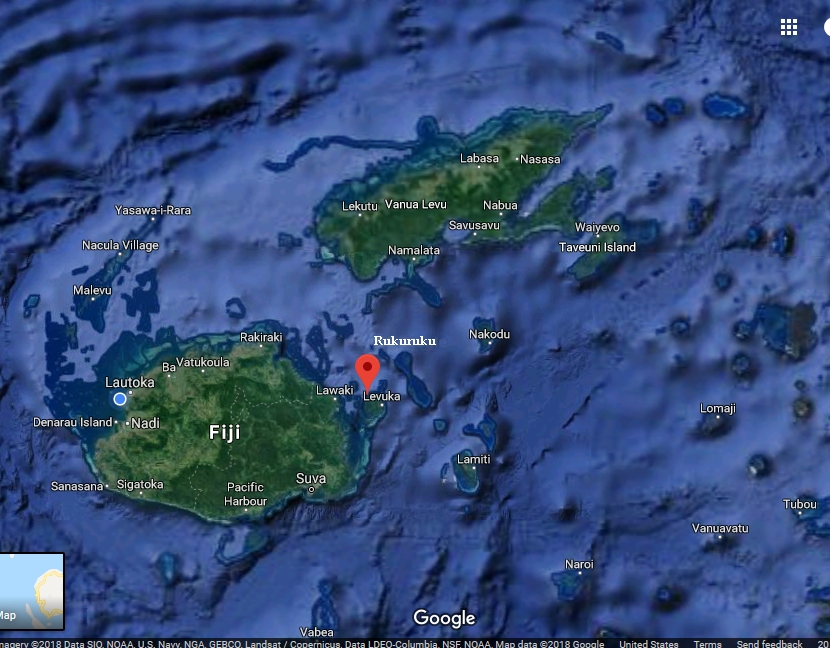 Rukuruku is a fun word. Say it and you'll see what I mean. 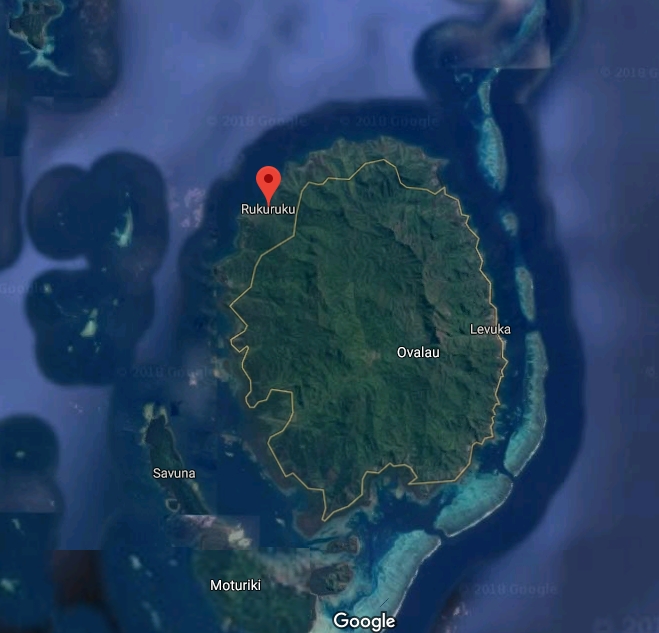 Rukuruku and Levuka on Ovalau Island

Motoring north from Levuka, inside Ovalau's barrier reef, enjoying the sunshine and calm water, we glimpsed reminders of Cyclone Winston's power, such as this grounded ferry, which was deposited on the shore by heavy surf - inside the reef! - two years ago, and will probably remain there until it rusts away. 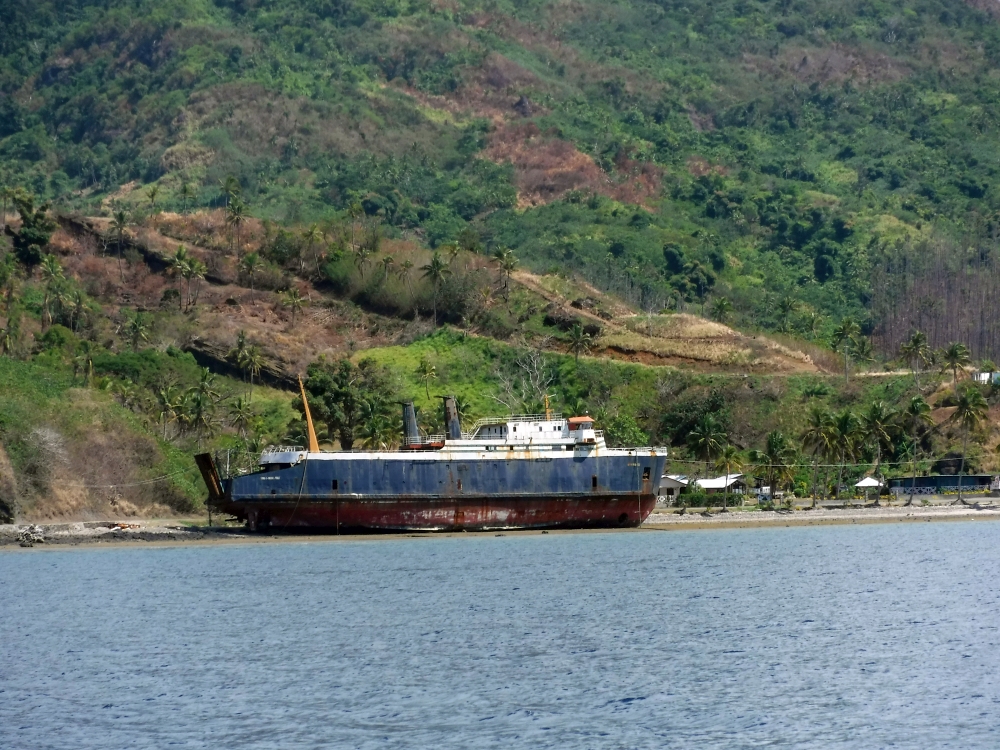 A few hours later, after the tide had risen a bit, we put on our "village" clothes - for me, a shirt that covered my shoulders, and a skirt that covered my knees, worn over my shorts ; for Eric, a bula shirt and shorts (men's knees apparently aren't risque) - grabbed a ceremonial bundle of kava, put the dinghy in the water, and headed to shore. We'd watched the routes of a couple of pangas that had made their way to the village when the water had risen a bit, and we tried to follow in their paths. Still, giant coral fans and branches loomed up on either side of our dinghy, at prop depth. 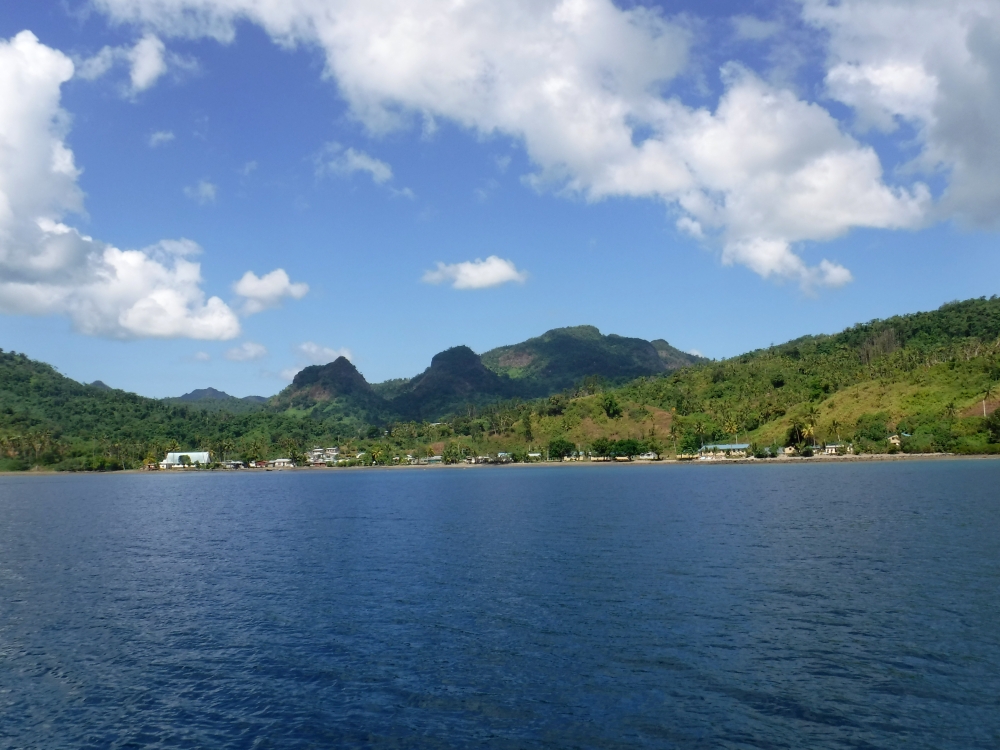 As we coasted into the shallows, we were met by an energetic bunch of swimming kids, all eager to help haul the "kavalangis" (Europeans) to shore. They grabbed onto the dinghy's handles and the painter, and pulled us to shore. Once we were on shore, a man directed us to the village's community hall, where the chief was drinking kava with about a dozen other people, all of them seated in a loose circle around a large carved tanoa (kava bowl), on a large woven pandanus mat.

Usually, when we prevent sevusevu, it's just us and the chief, who says a few words in Fijian, welcomes us to the village in English, and sends us on our way. We don't drink kava with him. But this time, after presenting our sevusevu, we were invited to stay and join the party, which we did. The people enjoying kava with the chief were members of his extended family who were visiting from a nearby town. I spoke with some of the women, and Eric spoke with some of the men, while all of us sat cross-legged on the floor, taking our turns drinking kava from coconut shells.

The conversations among the villagers was in Fijian, so we didn't catch what they were saying, but it became apparent after awhile from their glances and smiles that they were talking about us. The woman I was talking with told me that the young men were wondering if Eric and I would get drunk on "grog" (slang for kava) and not be able to get back to our boat. This wasn't a danger, as kava doesn't have an intoxicating effect on us, though it does make our lips and tongues a little tingly. We all had a good laugh about it.

Some of the men examined the kava bundle that we'd brought, and sniffed it. They asked us where we'd gotten it. "In the market in Suva. It's from Kadavu." Villages on Kadavu, along with those on the islands of Taveuni and Ovalau - including Rukuruku - are major producers of kava. These local guys were comparing our offering with the kava they grow themselves. I don't know how well it fared.

Our kava bundle. It's about 16 inches long. When you purchase a sevusevu bundle in the market, the roots are wound together, wrapped in paper (often newspaper), and tied with a ribbon.

After a few rounds of kava, a bag of lollipops was passed around - "grog chasers" the woman told me. Each person took a sucker or two, and sucked on it between drinks of kava. It made for an interesting blend of flavors...kind of like a lollipop that had fallen into some dirt.

A while later, using the excuse of being kavalangi who apparently didn't know that good manners required that we stay until all the kava had been consumed (we did know, and we also knew that this would be another few hours), we stood and said "sota tale" (see you later) and made our way back to our dinghy. The kids were still swimming, and with big smiles, they eagerly untied and pushed our dinghy out away from shore. A few of them hopped on, hoping for a ride out to SCOOTS, but we gently suggested that they instead use the dinghy as a diving platform, and so they leapt exuberantly back into the water and swam the short distance to shore, laughing and waving at us.

SCOOTS in the anchorage

During my conversation with the village women, I had mentioned that Eric was good at fixing things. In fact, whenever we anchor off a village, he makes a point of finding out what needs fixing, and then does what he can to remedy the situation. One woman, whose name was Doh, had asked if Eric could fix her washing machine. He said he'd take a look at it. So the following morning, Eric grabbed his tool bag and we dinghied to shore. We'd been informed that the safe route to shore was to line up on a mango tree that grew beside the house on shore, so we did that and threaded our way nicely through the coral.

Once on shore, we asked where Doh lived, and were led through the village to one of the houses. Doh met us at the door and welcomed us into her home, which like many village houses, was constructed of cinder blocks, plywood, and corrugated metal. The floor of the main room was covered with linolea (if this isn't the plural of linoleum, it should be) of various competing patterns, with a large woven pandanus mat in the center. A small bed was tucked against one wall, a television on a small stand was against another, and the ailing washing machine - a small molded-plastic model of Korean provenance - stood near another wall. As in most village homes, there were no table or chairs; I sat cross-legged on the floor, chatting with Doh, her teenage daughter, and her mother, while Eric diagnosed the washing machine.

"It makes a noise," Doh had told Eric. Not a very detailed starting point, but he dove right in. When the washing machine was plugged in (Rukuruku, unlike most of the villages we've visited, has continuous electricity), and the small agitator began to move, it slipped, and made a grinding noise when it rotated in one direction but not the other. Eric spent some time disassembling the washing machine, looking for the source of the grinding noise, eventually extracting a small plastic gear with most of its teeth worn away.

"I think I can fix this," he told Doh, "but I'll have to take it to my boat and do some work on it, and bring it back in a couple of days." Doh agreed, and we arranged to come back again another day.

While Eric was working on Doh's washing machine, a young man in his twenties came and sat quietly against one of the walls. When Eric and I were ready to leave, he stood up and asked us diffidently if we could please take a look at his washing machine, too. Sure, no problem. Turns out, he lived next door, so it was a short walk.

As Eric diagnosed the washing machine, we chatted with the young man, who introduced himself as Sam. We had a nice conversation with him, and became quite good friends during our time in Rukuruku. A little boy of about three years old, named Sivone, hung around, smiling and giggling, keenly interested in Eric's work on the washing machine. Sam's washing machine had a bad controller. Eric thought he could fix it, so he put it in his tool bag to take back to SCOOTS.

While we were there, Sam asked us if we could also take a look at his fridge ("It stopped making cold.") and his television ("It hasn't worked right since it got wet during Cyclone Winston.") Eric took a look at both, but sadly, there was nothing he could do for them.

Back at the dinghy, Sivone made rapid work of the knot tying the painter to a rock wall, and then he helped push it out from shore. What a cute kid! 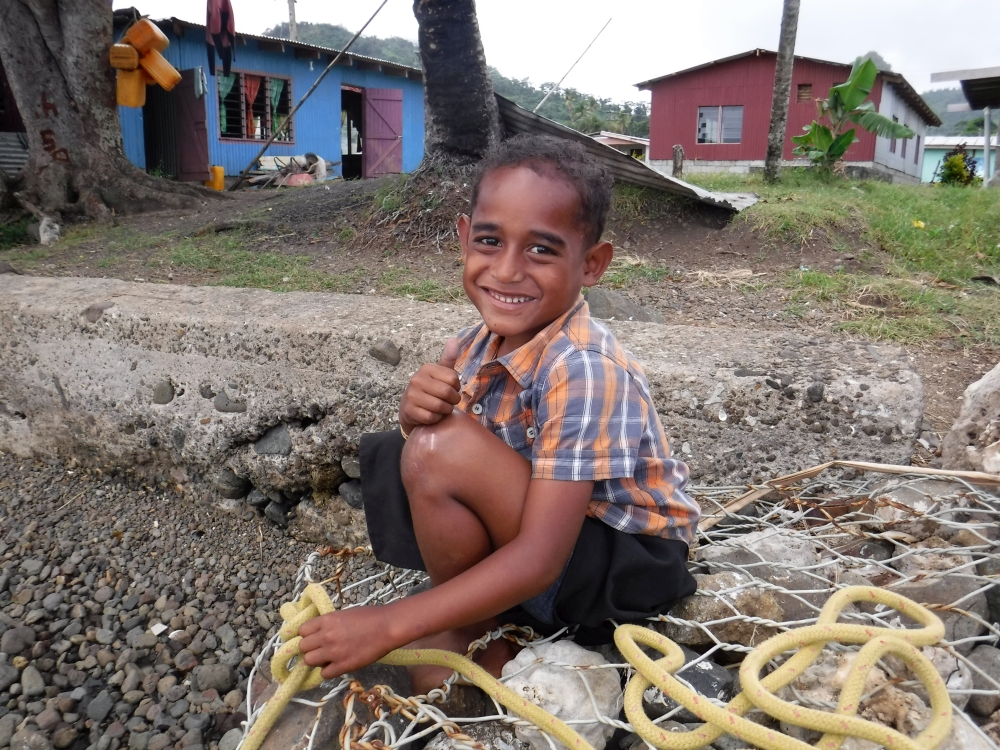 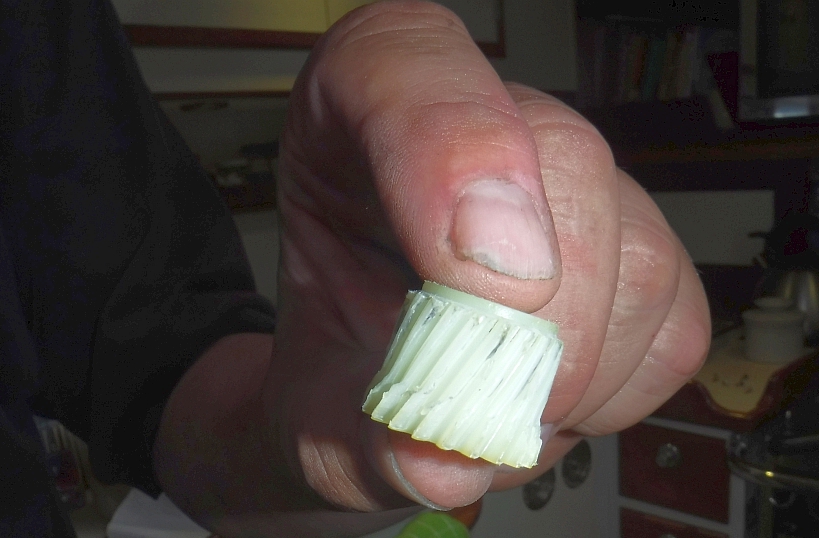 Doh's washing maching gear before Eric worked on it... 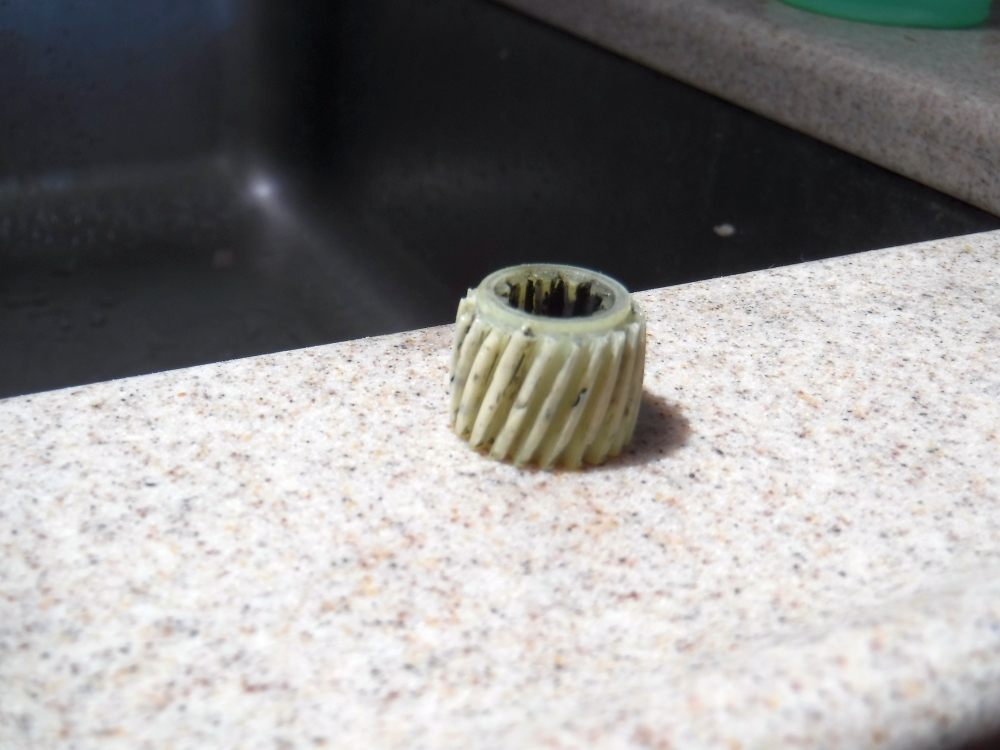 The next day was Sunday. As this is Fiji, no work was done, and as Sam had invited us to attend church with him, Eric and I dressed up in our Sunday skirts - "sulus" in Fijian - black pinstripes for him, and a floral pattern for me - and dinghied ashore to attend the Methodist service. We were surprised to learn that Rukuruku has several churches, catering to devotees of different religions, including Catholics and Seventh Day Adventists, in addition to Methodists. In all the other villages where we've spent time, there was only one church, which all the villagers attended. The minister preached a spirited sermon taken from Revelations; even though the sermon was completely in Fijian - as was the entire service, save for a short greeting for Eric and me - the message was quite clear: fire and brimstone apparently translates into all languages.

After church, we spent a quiet afternoon: Eric worked on Doh's gear and played bass; I paddled our kayak around the bay.

On a hill overlooking the bay where SCOOTS was anchored, I saw a couple of trees that looked (to me) like the heads of an elephant and a giraffe. Can you see them in the picture? 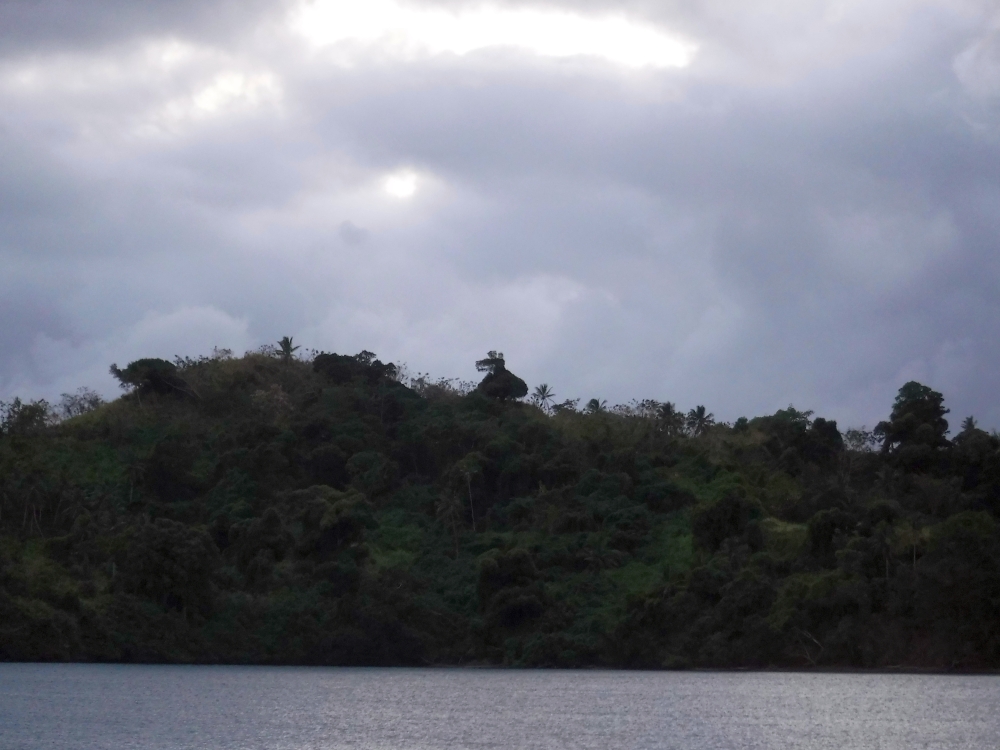 News travels fast. The next day, Sam texted us to ask if Eric could take a look at some other villagers' washing machines when we came to shore that day. Eric agreed, of course. Sam and Sivone met us at the shore, and accompanied us to Doh's house, where Eric installed the retoothed gear in her washing machine. When Doh turned the washing machine on, the agitator turned quietly. She was thrilled!

Then she asked Eric if he could take a look at the attached spin-dry basket, which also "made a noise," and her television, which didn't do anything at all. He was able to fix the dryer by adding some water to lubricate a couple of surfaces, but the TV needed a new flyback transformer, which Eric couldn't fix.

Next, we went to Sam's house, where Eric installed the washing machine controller. After that, for the next few hours, Sam and Sivone led us all over the village, from one house to another. 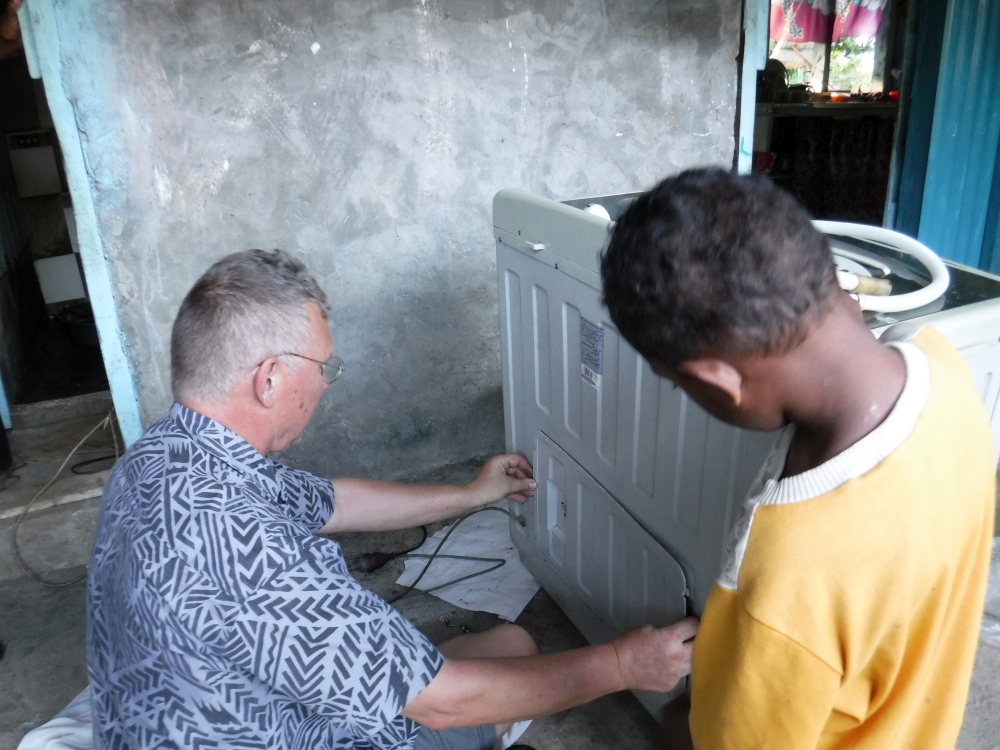 Eric and Sivone tending to an ailing washing machine

Along the way, four giggly little girls joined our group, accompanying us on our mobile repair mission, and tutoring me in the local version of Pat-a-cake. By the end of the day, Eric had diagnosed six washing machines, three televisions, and a couple of DVD players. Some he was able to repair; others he was not. Almost all of the washing machines had the same bad part - a motor-run capacitor. (When he got back to SCOOTS, Eric ordered several of these inexpensive parts so that he would have them on hand in the future.)

The next day, done with our repair mission and needing to find an anchorage that would shelter us from the strong North winds that were coming in the next day or so, we said goodbye to Sam and Sivone and, pulling up our anchor, set sail for the island of Makogai, home of the (truly) giant clams. 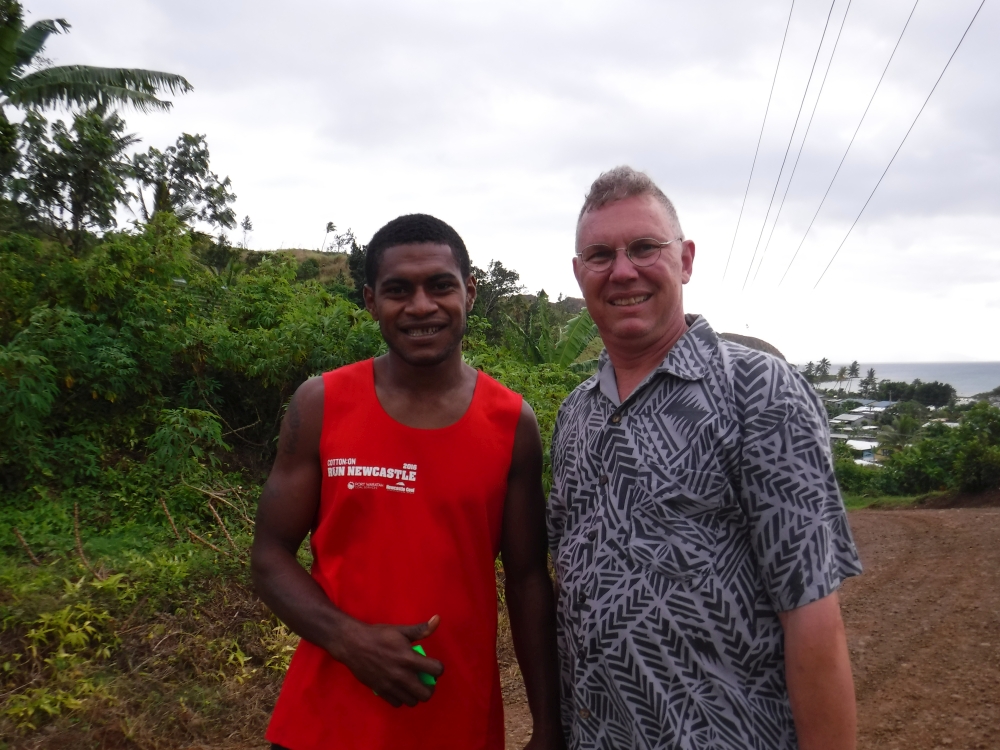