Lepers, giant clams, a small mystery, and a Fun Fact The next stop on our Koro Sea expedition was the island of Makogai: former home of a leper colony and current home of the Fiji Department of Fisheries Research Station with its giant clam nursery. That would be a nursery for giant clams, not a giant nursery for clams. 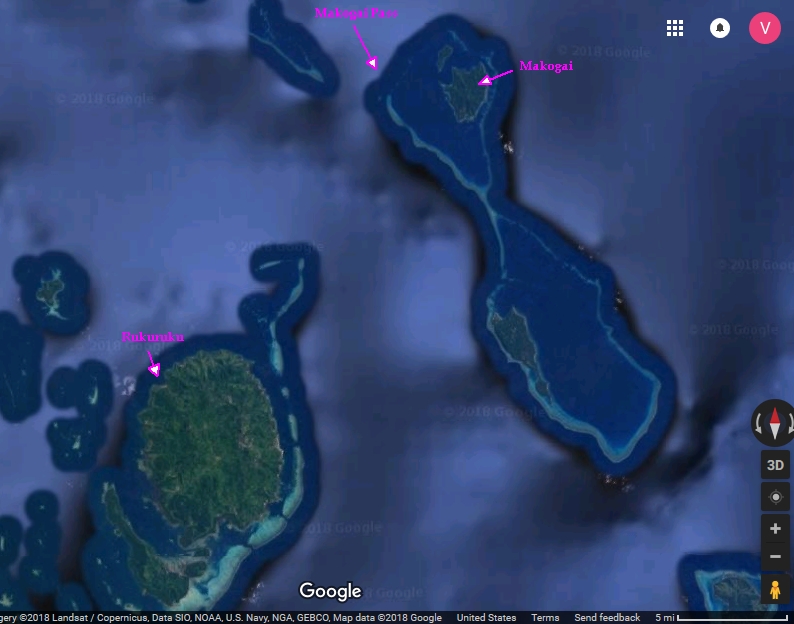 After a lovely three-hour sail from Rukuruku, we neared the "pass" to the west of Makogai. I put "pass" in quotes because usually we expect (or at least hope) a pass will be a clear slot through a reef, that's easily seen on a chart or with our eyes. This one - and it's the main one into the reef around Makogai - is actually just a place that a boat can slip through among uncharted coral pinnacles (blue with + in the chart). 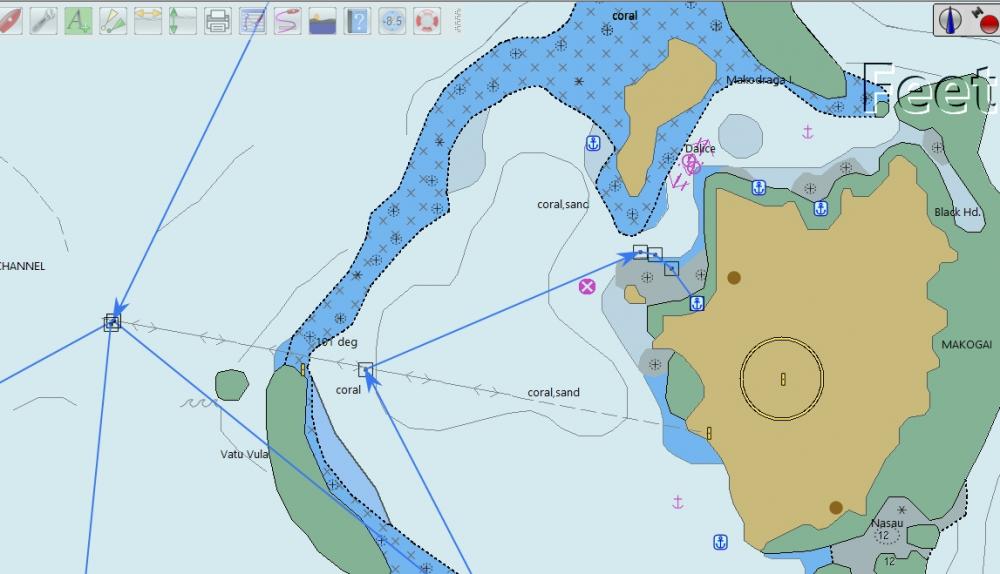 The channel marker shown on the chart isn't actually there, a common occurrence in Fiji. We were confident that we'd be able to navigate through safely: we could easily see a few landmarks - big coral reefs with waves breaking on them (green in the chart), we had satellite photos of the area, and we had a track of another boat's successful transit of the pass, which we were following closely. 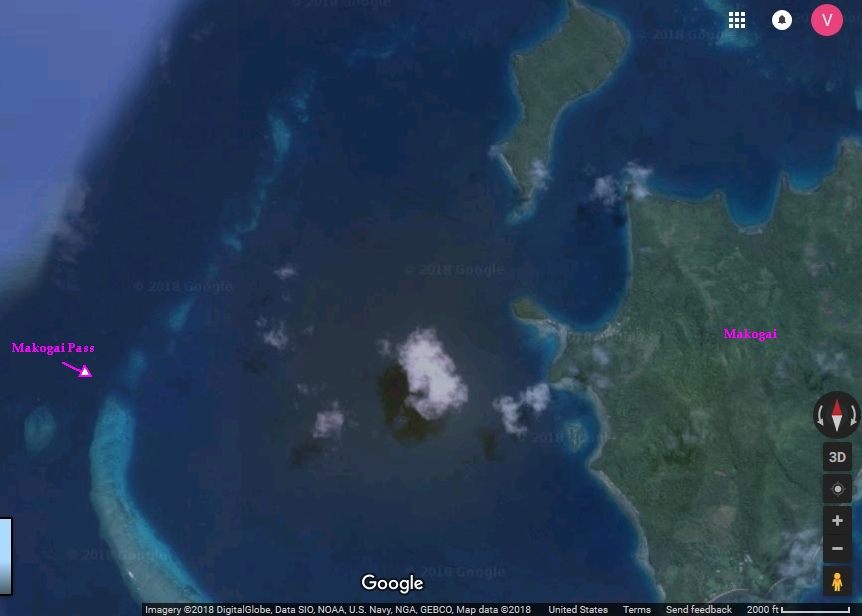 As usual, I was up on the bow with my radio, looking for submerged coral heads, as we slowly went through, and as expected, everything went fine.

As we entered the anchorage on the northwest corner of Makogai, we saw that two other boats were already anchored there; boats with whom we'd shared anchorages before. It's always fun to come into an anchorage populated with friends! Before we left Makogai, ten days later, we'd spent lots of fun times with old friends and made some new ones.

We set our anchor, put our dinghy in the water, and buzzed to shore to do sevusevu. After steering around several red and orange floats in the shallows near shore, Eric then drove the dinghy onto the beach, where we pulled it up and tied it to a nearby coconut palm. Further away on shore, and on a damaged and crumbling cement wharf nearby, a dozen or so men were busily working: some welding, some making concrete to repair the troughs of the clam nursery, some constructing buildings, some doing a job that required hammering loudly on metal.

As we walked up from the beach, a middle-aged Fijian man left a group of workers and approached us. He welcomed us, told us his name was Enochi, and said he would represent the village for our sevusevu, the village being situated on the south side of the island, several miles from the anchorage. Enochi led us over to a shade structure, where we sat on the ground and presented him with our kava bundle. Enochi recited the traditional Fijian statement (I have no idea what's actually being said), and then welcomed us to Makogai. Sevusevu being completed, Enochi told us that he'd like to take us on a tour, but that he was very busy at the moment. Could we come back tomorrow?

The next day, when we went back for our tour, we encountered a group of the workers butchering a three-foot-long tuna on the beach. "Sashimi!" one of them shouted to us, with a thumbs-up, when we walked past.

On shore, we were joined by the crews of the boats Barefoot, Blithe Spirit, and Troubadour, who had come ashore to present sevusevu to Enochi. After accepting their sevusevu, Enochi took all of us on a fascinating tour of the of the ruins and cemetery of the former leper colony, and the tanks of the giant clam nursery. Eric exploring the leper colony cemetery, whose graves were mostly those of the European clergy who tended the lepers. 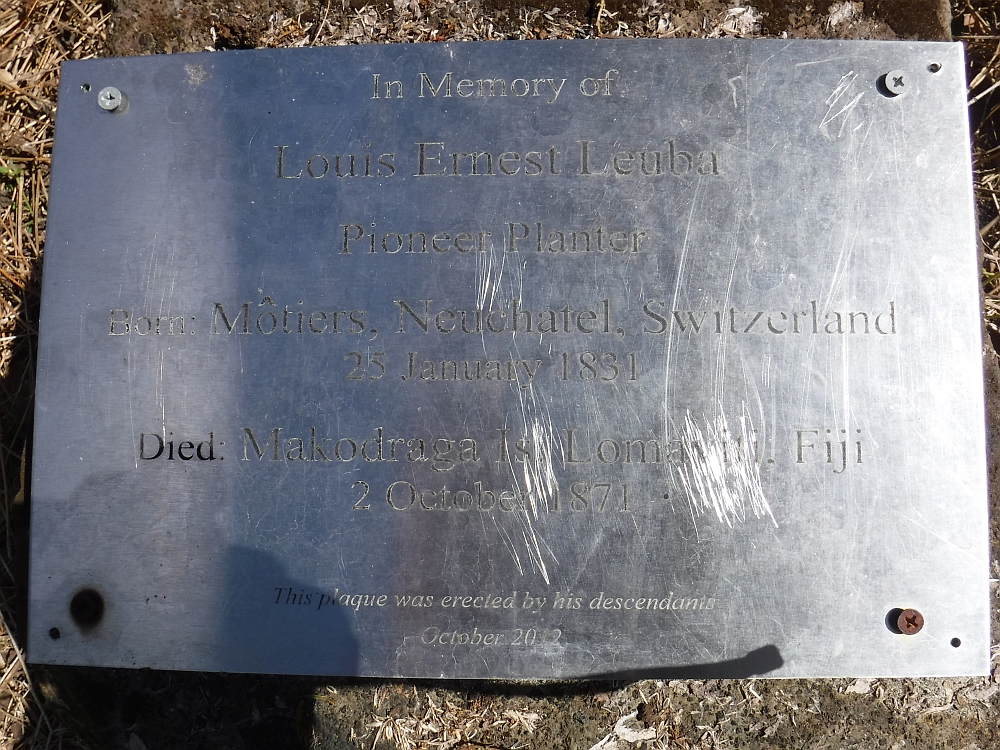 As was to become a trend throughout our explorations of the islands of the Koro Sea, Makogai had suffered greatly when Cyclone Winston roared through the area in 2016. Much of its vegetation had been stripped away, trees had been toppled, the concrete wharf had been damaged, buildings - some that had been standing for more than a hundred years, other newer structures, including homes of the workers - had been destroyed or blown away. Even the turtle farm was wiped out, though Google Maps still indicates that it's there. Over and over again during our tour, Enochi would gesture toward an open area and say, "Before Cyclone Winston, here used to stand...." Much of the work currently taking place at the research station involved the building of new homes for the workers. Enochi with the Lister diesel, which has been supplying power to this part of Makogai for more than a century. The new buildings are constructed of metal.

The giant clam nursery, which is home to thousands of adolescent giant clams, consisted of about twenty long, shallow concrete troughs, shaded from the tropical sun, with seawater running continuously through them. The baby giant clams are so cute: yearlings are about a half inch long. These baby clams are about an inch long.

Collected as tiny fertilized eggs, the baby clams are nurtured in these tanks for several years until they reach a few inches long, at which time they're transferred to local resorts, who incorporate them into their reefs. The nursery was begun by the Fisheries Department as a way to prevent the giant clams - which grow very slowly and are a delicacy among Fijians - from being extirpated. Enochi told us that it takes 50 or 60 years for a giant clam to reach its full size; full size being about four feet long.

During our tour, Enochi told us that the red and orange markers near the beach, and a couple of others scattered around the anchorage, indicated the locations of adult giant clams. As soon as we got back to SCOOTS, Eric and I changed into our bathing suits, grabbed our snorkeling gear, and headed over to the markers. As soon as we were in the water, we saw them: huge clams, their inches-thick, four-foot-long shells gaping more than two feet wide, their bodies sucking seawater in through a six-inch-diameter siphon and releasing it through a twelve-inch-long slit. Seriously giant clams, the kind that you see in cartoons, the kind that could close on your leg and keep you there if they wanted to. We were awestruck and amazed. When we got back in the dinghy, Eric said, "My life is now more complete." Wow, who knew that's all that was missing?

We checked out the other clams in the shallows, then spent the next hour exploring the fantastic reefs marked by the other floats in the anchorage. Makogai's vibrant and colorful reefs were some of the best we've snorkeled. And to top it off, each boasted at least one massive giant clam.

Fun Fact: In the 1980s Makogai was the site of a project to breed a new variety of sheep that could thrive in the tropics. The program was successful, eventually giving rise to the Fiji Fantastic sheep breed.

Another day, as we were dinghying to shore for a walk, we encountered a young couple who were rowing their dinghy to shore against the wind. We offered them a tow, which they accepted. As they went to find Enochi, to do sevusevu, Eric and I walked up the road toward the high spot on the hill that Enochi had indicated was the only place on the island that had cell phone reception. We would know the spot, he said, because it had a bench. As we were sitting on the bench, enjoying the expansive view and the opportunity to check our email, the young couple came by and clambered up the rocky outcrop to join us. Eric on the cell phone bench on the hill

Rekka and Devine, from the sailboat Pino, accompanied us on the rest of our walk along the dirt road, during which we enjoyed some spectacular vistas and fun conversations. Unfortunately, as we were towing them back to their boat, their dinghy popped a seam, which required them to spend the rest of the day, and the next day as well, attempting to adequately patch it. Since they couldn't come to SCOOTS, we picked them up in our dinghy at sunset. By then, they really appreciated a cold gin and tonic. While at Makogai, I spent many pleasant hours kayaking, stalking wild (well, probably feral) papayas, birdwatching, and birdlistening. There were so many birds on Makogai! As soon as we arrived in the anchorage, in fact while we were still anchoring, I heard a bird call that I hadn't heard before. "Cool!" I thought, "A new bird to chase!" Chase it I did, because even though I heard that call a hundred times during the ten days we were anchored at Makogai, and was sometimes able to train my binoculars into the dense foliage whence it came, I was never able to actually see a bird making the sound. A few times, I saw vanikoro flycatchers in the vicinity of the call, and while I suspect that they were the source, I can't be sure. To muddy the waters further, when I had access to the Internet again, I listened to all the vanikoro flycatcher recordings I could find: none of them included that call. I've never heard it anywhere other than Makogai. And so it remains a mystery.

One day, while I was stalking feral papayas, I ran into one of the workers, who was collecting coconuts. I asked him where everyone else was, as work on all the projects seemed to have stopped. "They are at hospital in Levuka," he said. "They got sick, ciguatera poison, from eating the big fish. They ate the intestines."

"I got there too late," he said with a rueful smile. "And it was already eaten."