*Though SCOOTS and her crew are hanging out in New Zealand until May or June, I've posted a blog about the time we spent at Koro Island, Fiji, from last September. Enjoy!*


We'd decided to visit Koro Island next, exiting the reef through Makogai's nebulous NE pass, rather than its main pass, to the west. The morning was calm and sunny as we pulled up SCOOTS' anchor and motored toward the pass, Eric at the helm and I at my usual post on the bow, both of us with handheld radios. Visibility was superb, and as we passed the first waypoint I was able to see the coral heads lurking nearby. Eric kindly told me when we were going to be making a turn, because it's kind of nerve-wracking to be heading straight for a reef. The waypoints were spot-on, and though I was holding my breath, we transited the pass without any drama. Hooray for accurate navigation!

I was really excited as we approached Koro Island about six hours later. Having read about Koro's verdant jungles, vibrant bird life, the eco-conscious Koro Seaview settlement, and the inviting Dere Bay Resort, and seen them in so many beautiful photos online, I couldn't wait to experience them. Maybe the resort would even arrange a birdwatching trip! As we neared Koro, I called Dere Bay Resort on the phone number listed on their website, to inquire about tying up to one of the mooring buoys they manage in the bay. No answer. A little while later, I tried again, with the same result. No problem; we'd just tie up to a mooring buoy and sort it out with them later when we dinghied in. I grabbed our binoculars, and scanned the bay for mooring buoys and found two: one with a boat already tied to it, and another floating unoccupied nearby. As we made for the unoccupied mooring, we realized that the boat was Pilgrim, whose crew of Sheryl and Ron we hadn't seen since last year. It would be fun to get reacquainted with them. Where SCOOTS anchored in Dere Bay

As we approached Dere Bay, on the northwest corner of the island, the hillsides and the resort's dock – a long, elegant structure that features prominently in photos on the resort website – began to come into focus, I realized that something was off. None of it was like the pictures I'd seen. Though there were some areas of jungle on the hillsides, there were also large grassy patches where trees had been ripped out, and large swaths of brown, composed of dead and defoliated trees and denuded soil.

Swatches of brown and green

The dock was neither long, nor elegant, but instead had been severed into two shorter docks – and these canted at alarming angles – with both the thatch-roofed palapa at the end, and a long middle section missing completely. 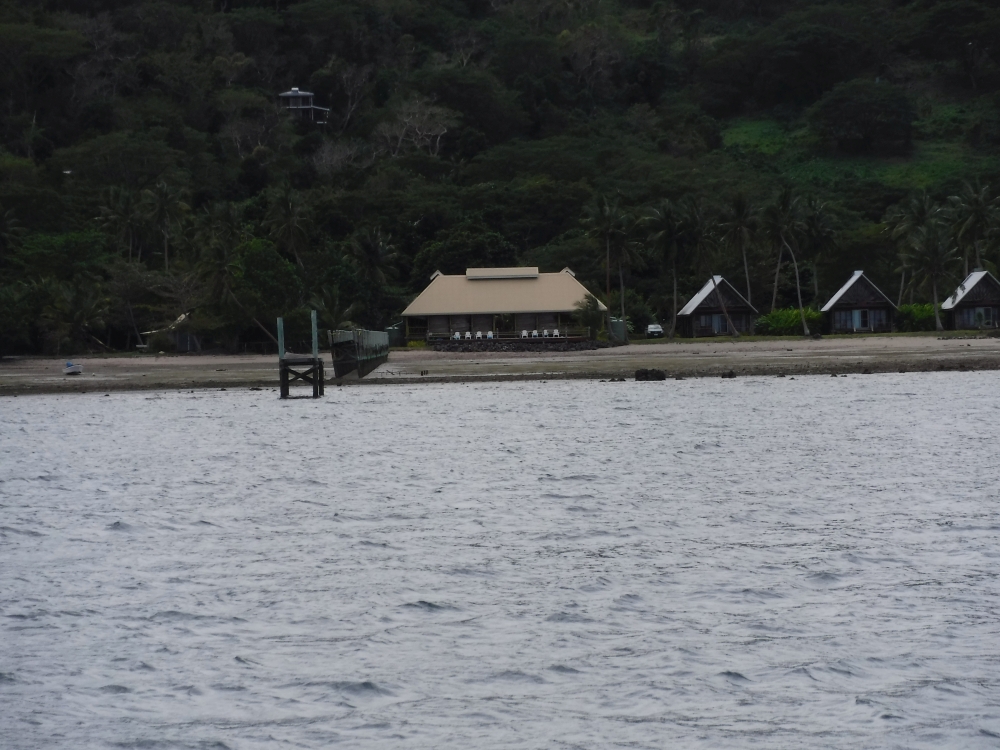 The dock as it now is

A few of the homes comprising the eco-conscious settlement stood intact on the hillsides, but all that remained of many others were foundations or a few cement support beams or just an empty, roofless, windowless husk. Though some homes were being repaired, many were in various stages of being reclaimed by the jungle and the weather, after being ruthlessly ravaged by Cyclone Winston two years earlier. In fact, I learned later that the villages at the north end of the island had been especially hard-hit.

Clearly, the storm had done more damage to Koro than I'd realized; none of it is reflected in the websites for either the resort or for Koro Seaview Estates.

After SCOOTS was secured to the mooring, I took advantage of the settled conditions; I floated our kayak and paddled around the shallow lagoon, peering down through the clear water to look at the extensive coral reefs below. Some parts of the beach were bouncing back

Eventually I paddled toward shore, hoping to see some of the birds behind the tantalizing calls I'd been hearing. Homing in on the raucous sounds, I floated in the calm shallows near shore, scanning the trees with my binoculars. I was soon rewarded with a flash of maroon, and then a tease of blue, which soon revealed themselves to be a parrot! And then another. And another. I had some great views of the birds, which were red shining-parrots, large birds with green and blue wings and tail, and – in the variety that lives here on Koro – a deep maroon throat and chest. A stunning contrast – made even more spectacular by the bright sheen of the blue and green feathers. No wonder they're called shining parrots! The main resort building itself looked intact, from our vantage point in the bay, but the true test came when we dinghied ashore, later in the afternoon. After swinging by Pilgrim to say hello, we tied our dinghy to the remaining section of dock near shore, and waded to the beach through knee-deep water. (The reason why the resort dock was so long is because the water is very shallow – much of it even dries out at low tide – for a long way out.)

The main resort building didn't look too bad, having either withstood much of Winston's wrath, or been repaired. Inside, we encountered a group of about a dozen ex-pats who live on Koro. Through no planning of our own, we'd managed to arrive during their weekly happy hour. Good timing! For the next couple of hours, the few employees who still worked at the resort were kept busy serving beer and wine, while we enjoyed chatting with the islanders. Some regaled us with harrowing stories of their experiences on Koro during Cyclone Winston, others reminisced about the days when they'd explored the South Pacific aboard their own cruising boats. As far as I could tell, the resort is now just a meeting place for locals; I didn't see any paying guests. No birdwatching trip was going to be booked. And I've since learned that the property is up for sale.

After happy hour, we stood on the dark beach pondering the state of the tide (it had gone out) and how best to get our dinghy back to SCOOTS (across several hundred yards of ankle-deep water). By now, the wind had come up and so we had the added luxury of being slapped with choppy waves as we slogged through the shallow water pulling our dinghy behind us, occasionally tripping or banging our shins on big chunks of debris that were hidden beneath the surface. At least the water was warm. When it was finally deep enough for us to use our dinghy, we flopped our drenched selves in and took off across the black water toward SCOOTS.

The next day, Eric and I went ashore to explore a bit on foot. As we walked on sandy paths and cracked concrete roads, we encountered several dwellings that had clearly once been quite posh, but which now had been abandoned to the insects, vines, and elements after being severely damaged by the cyclone. A house left in shambles

We also happened upon a row of cute beachside huts, most of which were in good condition, all sitting empty as though they were waiting for tourists to return. That night we enjoyed dinner at the resort (prearranged the day before, to make sure they had enough food) with the crew of Pilgrim. We tied our dinghies to the cross-members of the dock pretty far out, hoping that there would still be enough water to float them when the tide went out during dinner, and then clambered up the wooden cross-members to the dock planks for our walk to shore. After dinner, we were happy to see water under the dinghies; not enough for us to use our outboards, but enough for us to row into the wind and chop, until we reached deeper water, farther out.

The wind blew hard for most of the time that we were at Koro, which unnerved us a bit, as, not being scuba divers, we had no way of assessing the condition of the mooring to which SCOOTS was tied. For this reason, we're always more apprehensive when SCOOTS is tied to a mooring, than when we're anchored. But this time, we were especially on edge because the two remaining moorings had been through a major cyclone and were no longer being maintained by the resort. And no matter which way the wind blew, SCOOTS always seemed to have her stern pointed to a coral reef.

After two days, we were ready to say goodbye to Koro. We slipped our line from the mooring, motored out of Dere Bay, and set our sails for the island of Taveuni, Fiji's Garden Island.