After leaving Koro Island, in early September, we sailed north and found Paradise. Actually, it was pretty easy to find: it was marked on our charts.

Tucked into a nook in the western coastline near the southern end of the island of Taveuni, Paradise Taveuni Resort truly lives up to its name. 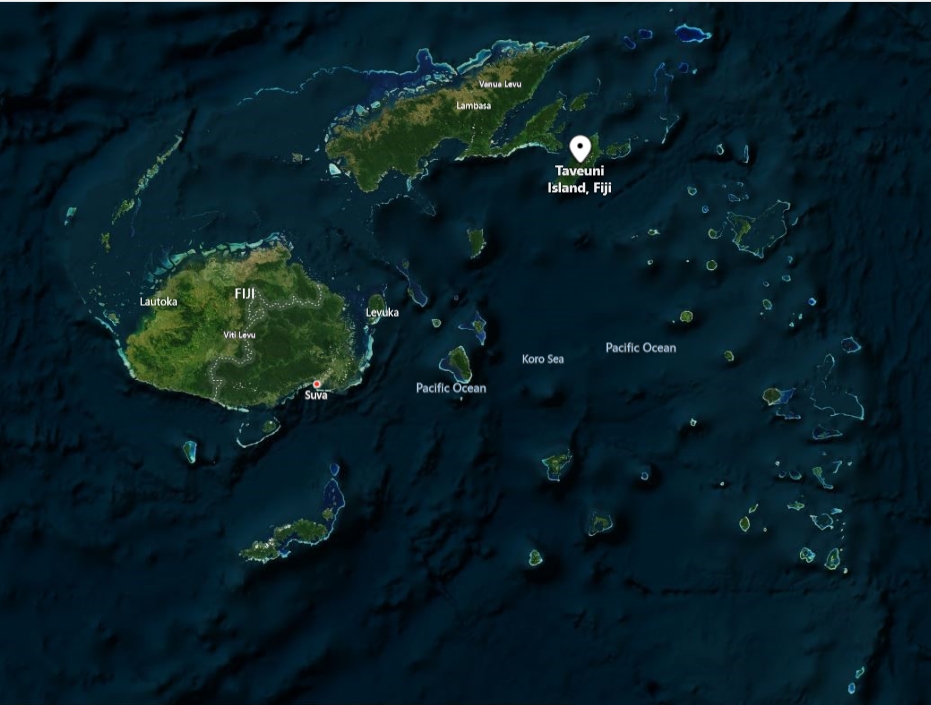 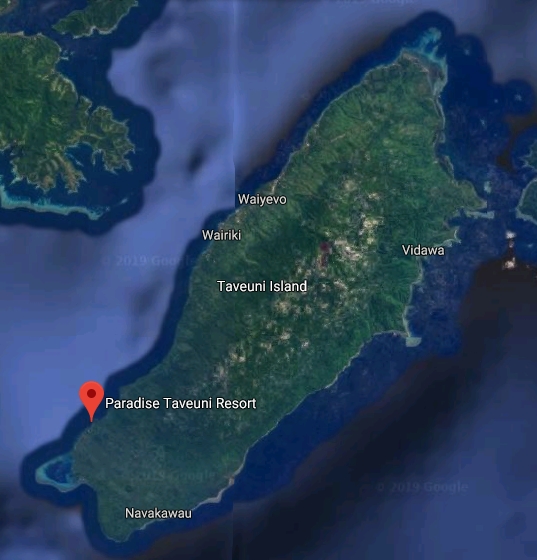 Severely damaged by the same cyclone that ravaged nearby Koro Island, Paradise Taveuni Resort has rebounded, rebuilt through the hard work and dedication of its owners and staff. (Link to Paradise Resort.)

The first hint that we were really going to like this place was when Alan, one of the resort's co-owners, answered our call on the radio as SCOOTS approached the resort. Things began well and just kept getting better.

"Good afternoon," I said. "Do you have any moorings available?"

"Great! We'll take one. How much do you charge for a mooring?"

"I'll send someone out with a kayak, to hand you the mooring line. See you soon."

This was the first time - ever - that we had had someone hand us the mooring line. Usually it was just one of us on the bow, hanging over the lifelines, swiping at the loop on the mooring line with a boat hook, and then pulling it up on deck to tie it.

After SCOOTS was secured, we took our dinghy to the small rock-and-cement platform where the resort's dive boats load and unload guests, and which serves as a dinghy dock. Following the footpath up the hill, we emerged onto an expansive grassy lawn, planted with a profusion of tropical plants. Palm fronds rustled in the light breeze. Collared lories, a kind of multicolored parrot, squawked in the lofty flame tree, and swung upside-down on the branches. The sun was shining, and the air was a pleasant 85F. Around the lawn, tucked into small jungles of greenery, stood several bures (huts), accommodations for the resort's guests. 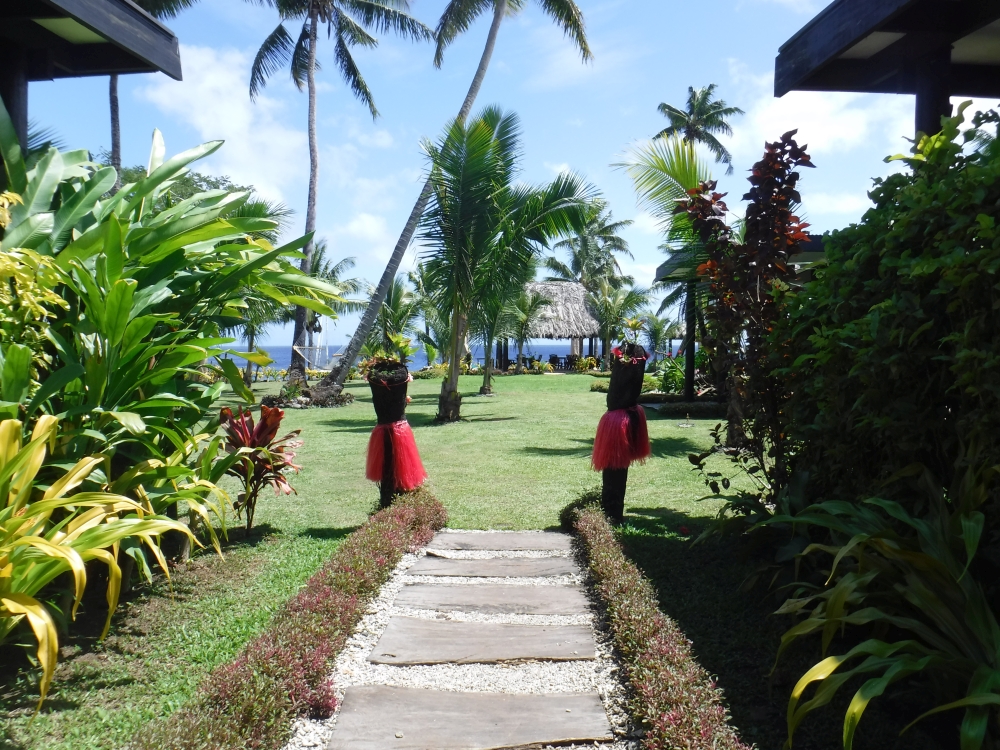 Covered patios perched near the cliff edge, overlooking the boats in the mooring field, and the Somosomo Strait beyond. What a gorgeous place! We walked through the large, covered outdoor restaurant and entered the main building to a chorus of "Bula!"s from the resort staff, and introduced ourselves. Mags, the manager on duty, told us that the crews of boats moored at the resort are treated as resort guests. Which meant that we ran a tab the whole time we were there, and were able to use the resort facilities as if we were staying in one of the bures. The staff learned our names and knew which boat we were on. It was such a friendly and welcoming place!

During the two weeks that we stayed at Paradise, we had a truly fabulous time. 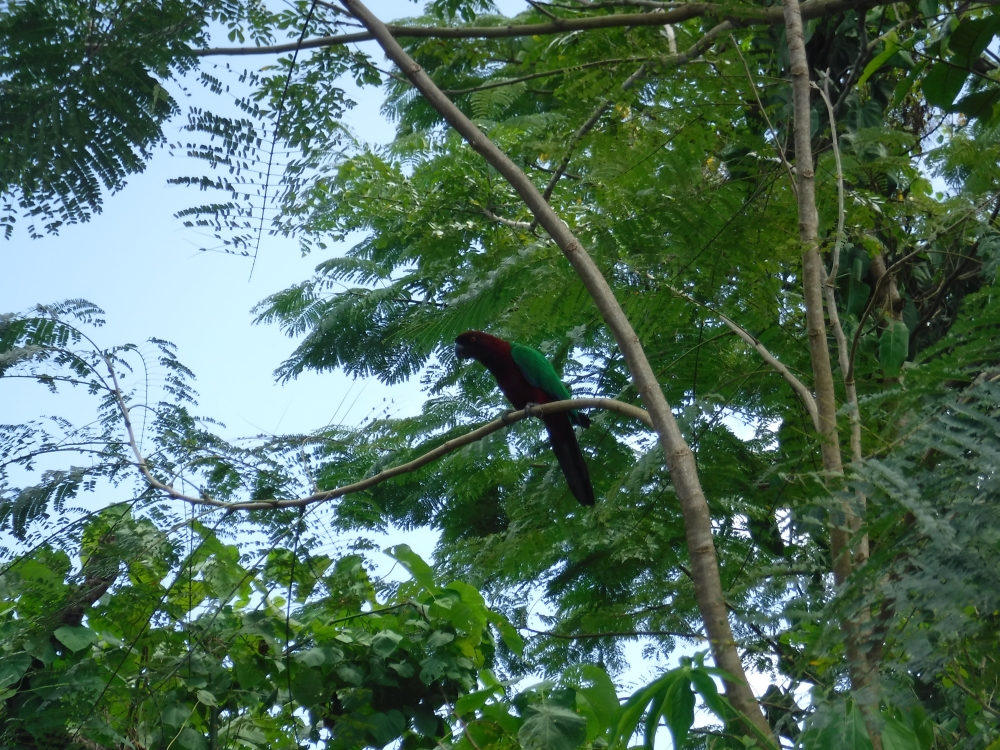 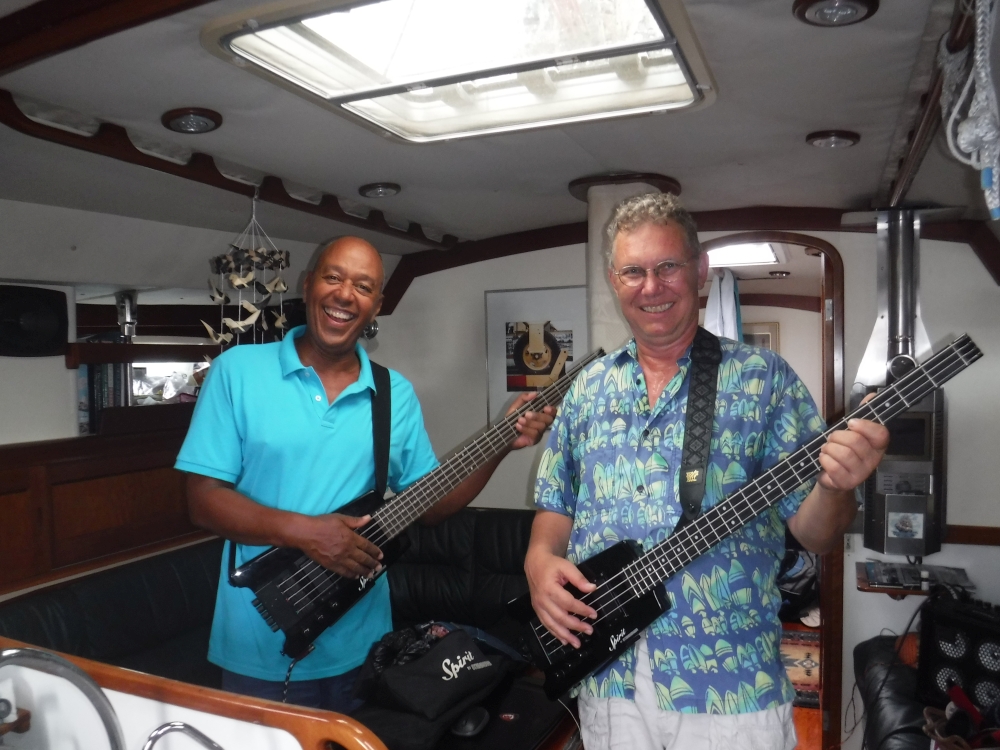 Eric and our friend, Martin, from s/v Acapella, playing bass on SCOOTS

walks along the coastal dirt road, usually accompanied by the resort's two dogs, Brownie and Beethoven, who both like to chase cars - yikes! Walking with the boys

snorkeling, including a ride on the resort's dive boat out to the world-famous diving spot, Rainbow Reef, where we snorkeled with our own guide,

exploring around the village 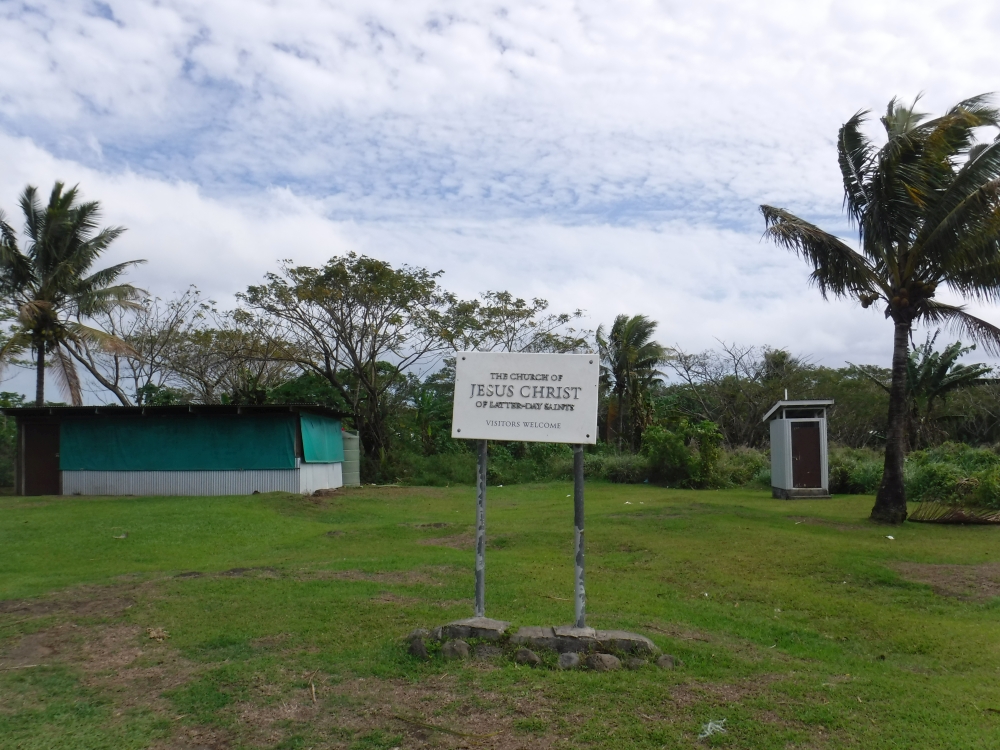 We encountered an LDS church with just the essentials: a sign, a meeting hall, and an outhouse 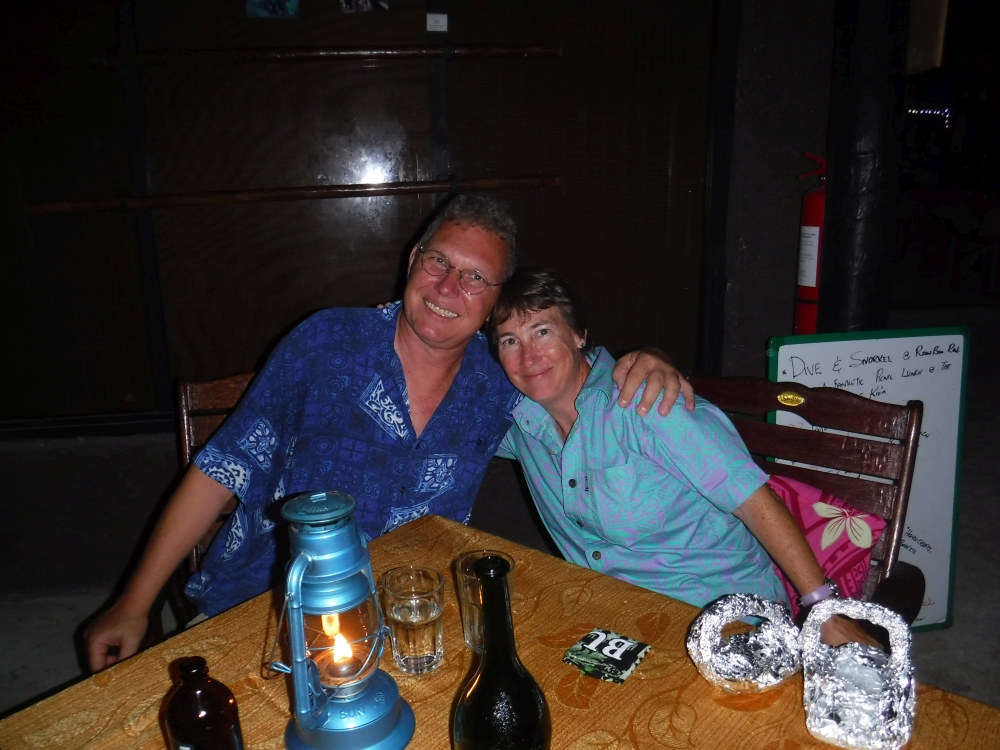 helping our friend, Karen, distribute free reading glasses to some of the local residents, 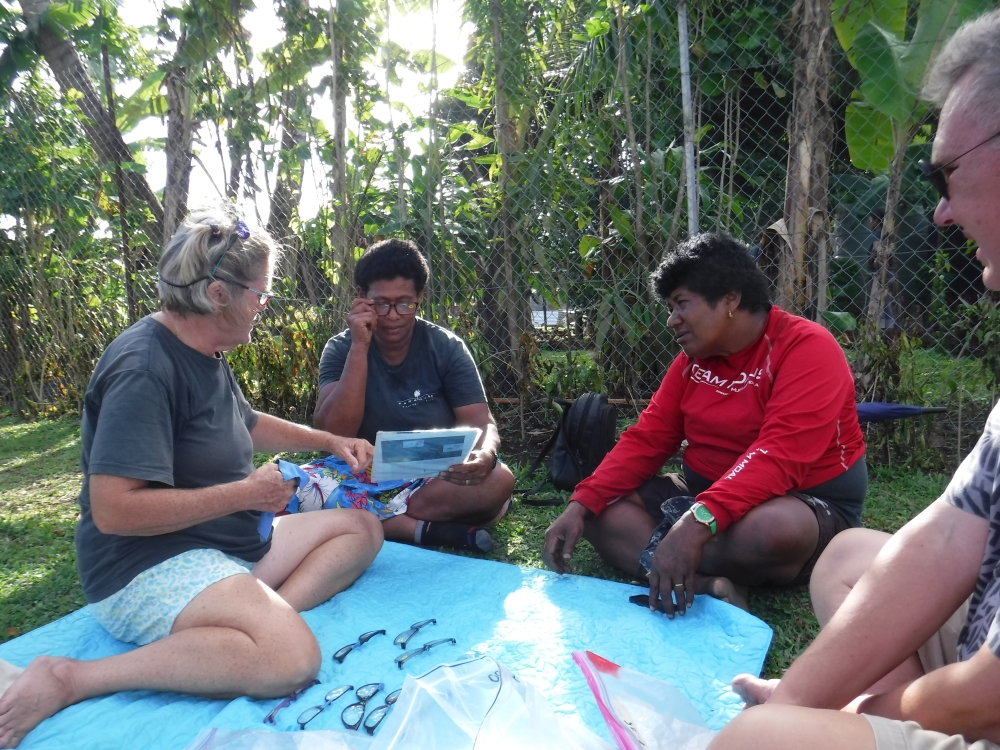 lots of tasty meals in the outdoor restaurant, where we socialized with other visiting yachties and interesting land-based guests from all over the world.

One day, we made a visit to Bobby's Farm - also known as Nabogiorno Farm - an ecological reserve just up the road from Paradise Resort. Besides learning about some of Fiji's native flora and fauna, I was really hoping to see an orange dove, a shy and seldom-seen bird that inhabits some of Fiji's northeastern islands and has been seen on Bobby's Farm. Here is a photo of an orange dove taken by our friend, Alison, who has seen one. I haven't seen one yet.

We saw a lot of birds at Bobby's Farm - many-colored fruit doves, vanikoro flycatchers, kingfishers, orange-breasted honeyeaters, black-faced shrikebills, slaty flycatchers, spotted doves, and a dozen red shining-parrots - but not any orange doves. Cyclone Winston had devastated much of his property, Bobby said, felling trees, stripping vegetation down to the bare earth, flooding, and spraying salt water all over everything. Prior to Cyclone Winston, there had been two orange doves living on his property, a mated pair. They survived Winston, but perished at the claws of feral cats a few days later. Oh well. Clearly I wasn't going to see an orange dove today.

Bobby spent several hours showing us around his property, sharing his love for and knowledge of the local flora and fauna. He told us that he had been practicing conservation and natural farming on his property for 37 years, where his family has resided for several generations. He is hoping to raise funding that would allow him to reach out to local students and residents, to invite them to his properties for ecological programs and to teach them about the natural world around them.

On our walk, which took a couple of hours, Bobby showed us lots of interesting things...

...a grove of fruit trees (mainly citrus), where he's employed a system of propagation known as "air rooting," which we'd never heard of. Here is what he does:
(1) Cuts a ring around a stem and removes the strip of bark.
(2) Puts some soil close underneath the barkless ring on the stem. (I don't know how he does this.)
(3) Waits.
According to Bobby, the plant will sense that the end of one of its twigs is no longer receiving nourishment. Sensing soil nearby, the twig will grow roots down toward the soil.
(4) When the roots have grown a bit, Bobby cuts the branch off below them and plants the rooted twig in the ground.

Bobby also told us than when he strips the twig while the plant is fruiting, the fruiting hormones are already present in the twig, so when the twig is planted, it will produce fruit the first year.

...quite a few huge, old-growth hardwood trees that had fallen during the cyclone which he was in the process of converting into lumber, for use as building materials on the island. This was a tough job, as many of the trees had fallen in areas of dense jungle

...how to sip coconut water through natural straws - hollow sticks broken from a nearby bush - from some green coconuts that Bobby had hacked open with a machete. While we sat there, several red shining-parrots came around, hoping for some crackers. Bobby obliged 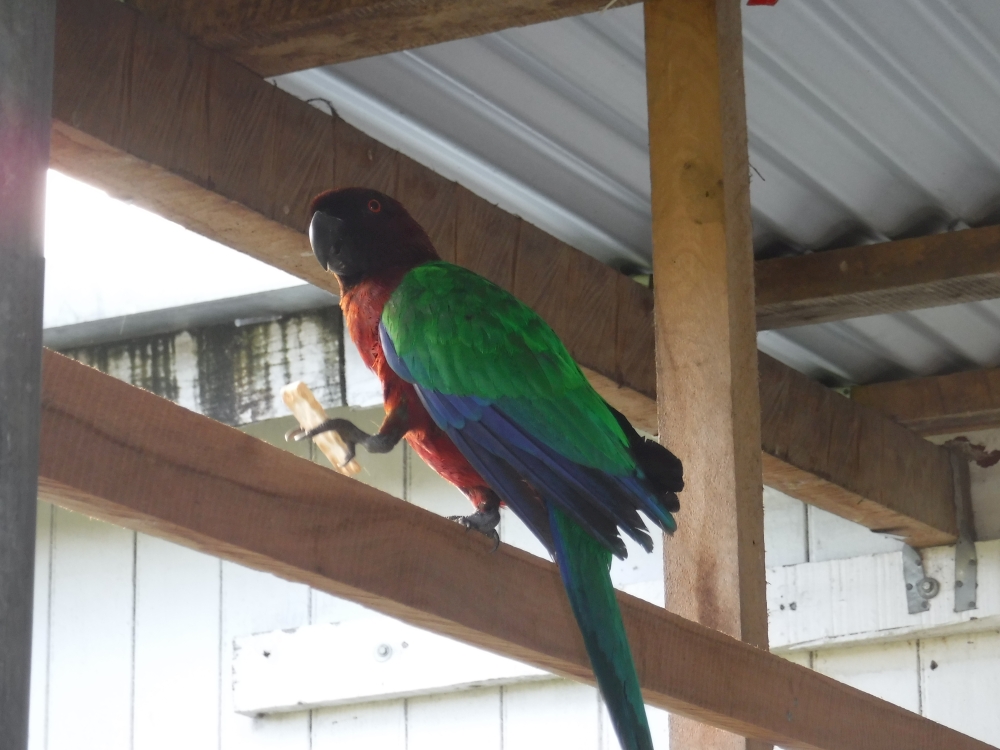 ...that the middle of a sprouting coconut contains a spongy material that he calls "natural birthday cake." It does actually taste a bit like cake!

...how quickly termites can repair a breach to their home: Walking by a termite mound, Bobby pierced it with a small stick, creating a hole. Termites rushed out and swarmed all over the mound. Later on our walk, when we passed by the termite mound again, the hole was gone, the termites having repaired it so well that we couldn't even see where it had been

...what a cacao tree and pods look like. Bobby cut open one of the pods and gave us some cacao seeds to suck on: The flavor was sweet and slightly sour; and nothing like chocolate

...a tree that produces a sweet/sour fruit right from its trunk, rather than on its limbs, and

...several large species of fern that seem to be growing upside-down, with their supports on top of the fronds, rather than underneath. 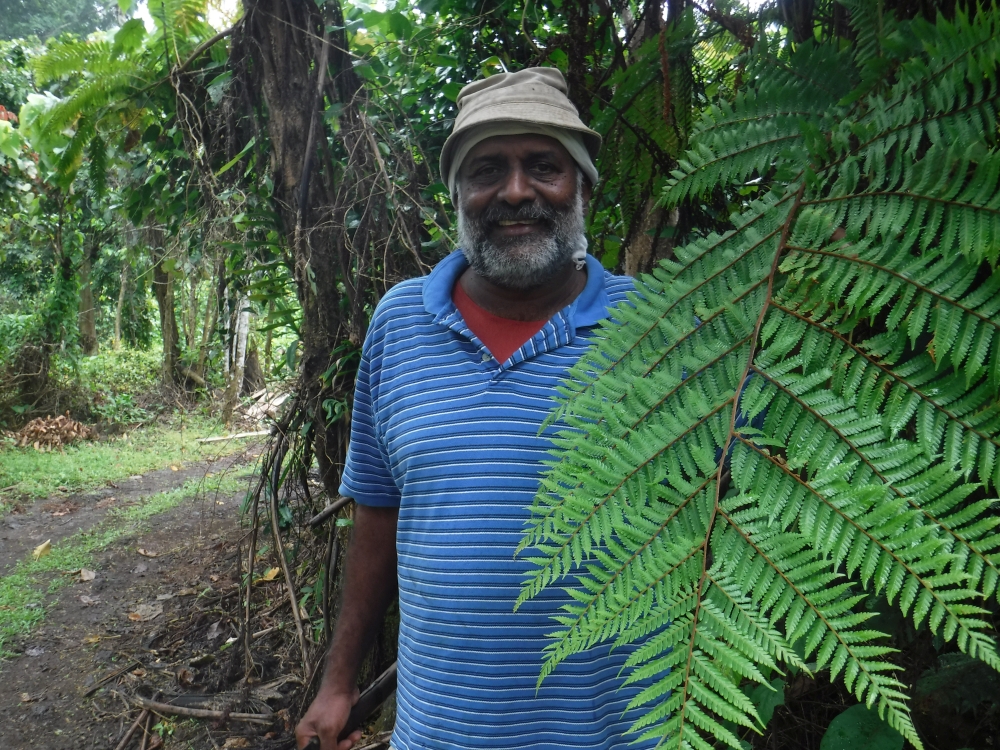 When we got back to Bobby's house, his wife had made us a lovely Indo-Fijian lunch, many of the dishes containing fruit and vegetables grown on their property. We had enjoyed a very educational and pleasant morning, even without seeing orange doves.

The mooring field at Paradise is usually flat calm, nicely sheltered from the tradewinds from the southeast or east, which tend to blow most of the time. There's only one thing that turns Paradise into Hell: a northerly wind.

When we had been at Paradise for about a week, the wind shifted and began to blow from the NE, funneling along the western shore of Taveuni, kicking up a considerable amount of chop. When the chop reached the mooring field, the dinghy dock became too treacherous to use, as the area around it became a washing machine, and the moored boats began to hobby-horse on their moorings, which was not only very uncomfortable, but also threatened to rip the mooring anchors from the bottom.

Clearly it was time to take SCOOTS somewhere else. "Somewhere else" was Viani Bay, about eight miles away, across the Somosomo Strait, where the anchorage offered shelter from the strong northeast wind. We called Alan on the radio and told him that we were heading across to Viani Bay and would be back in a few days, when the wind switched back to southeast.

We enjoyed five days in Viani Bay, a lovely place worthy of a blog entry of its own. Sadly, I probably won't write one, so I've included some photos as a poor substitute. But you'll get a flavor for the place. 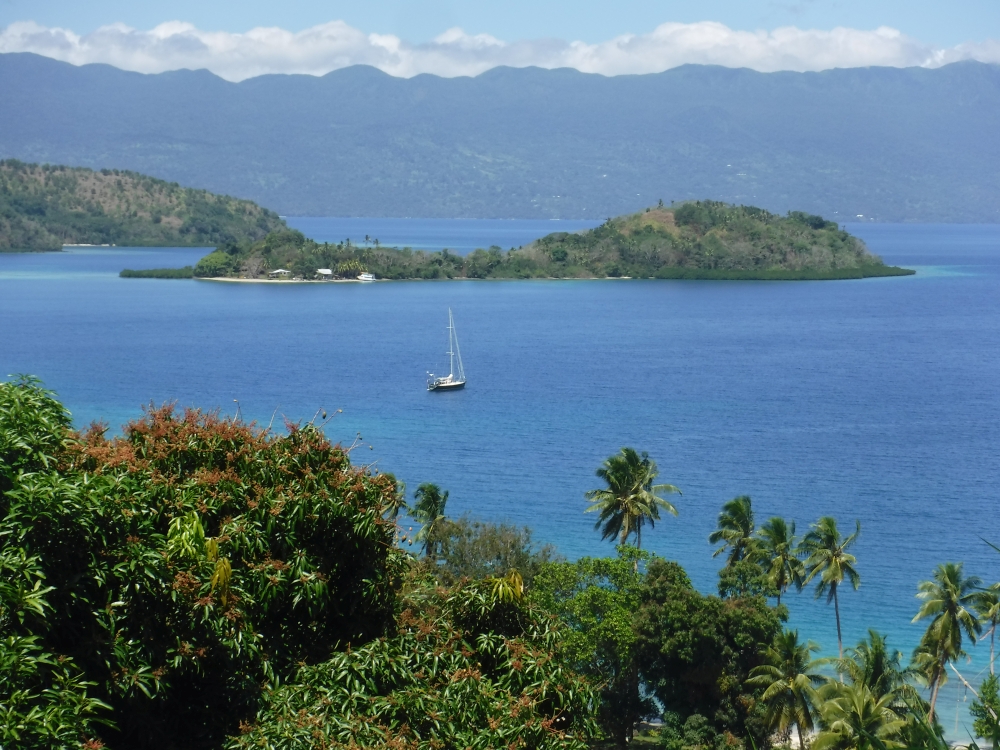 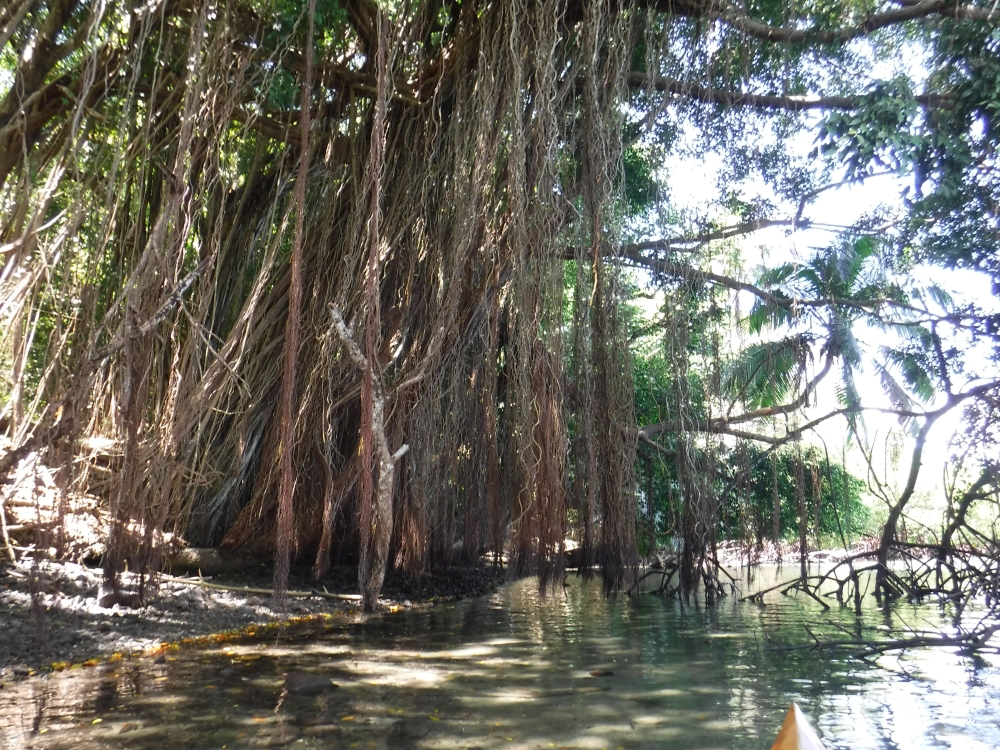 Banyans near shore where I went kayaking 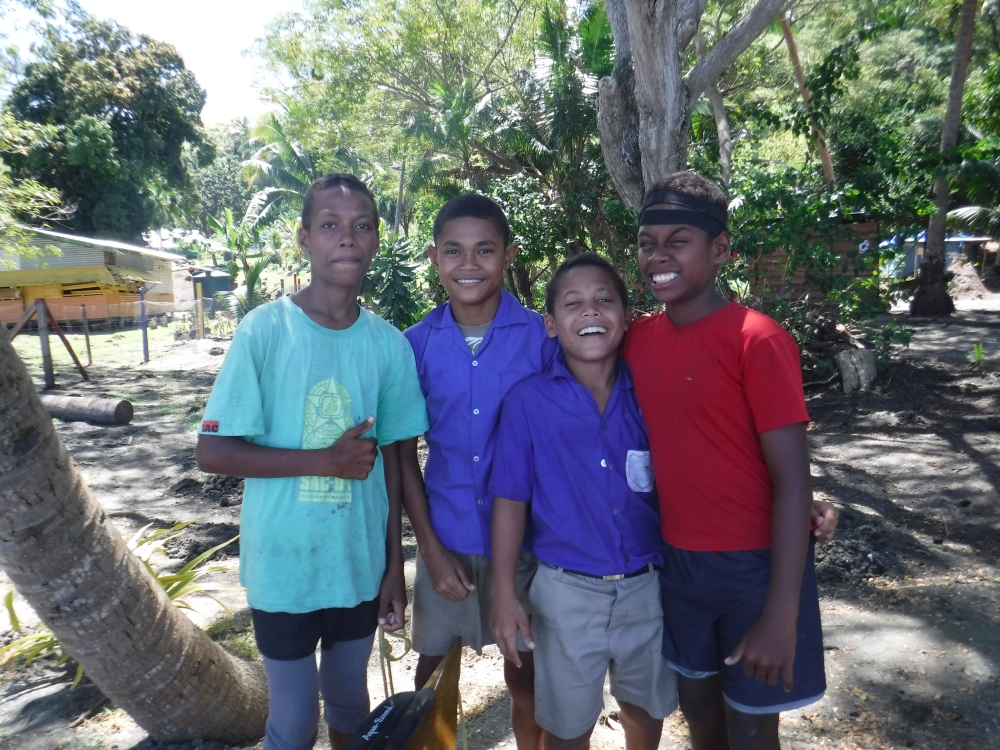 Some boys who helped me launch my kayak off the beac
I went looking for an orange dove there, too, but didn't see one.

When the wind blew from the southeast again, we sailed back to Paradise, where we enjoyed another week of bliss. 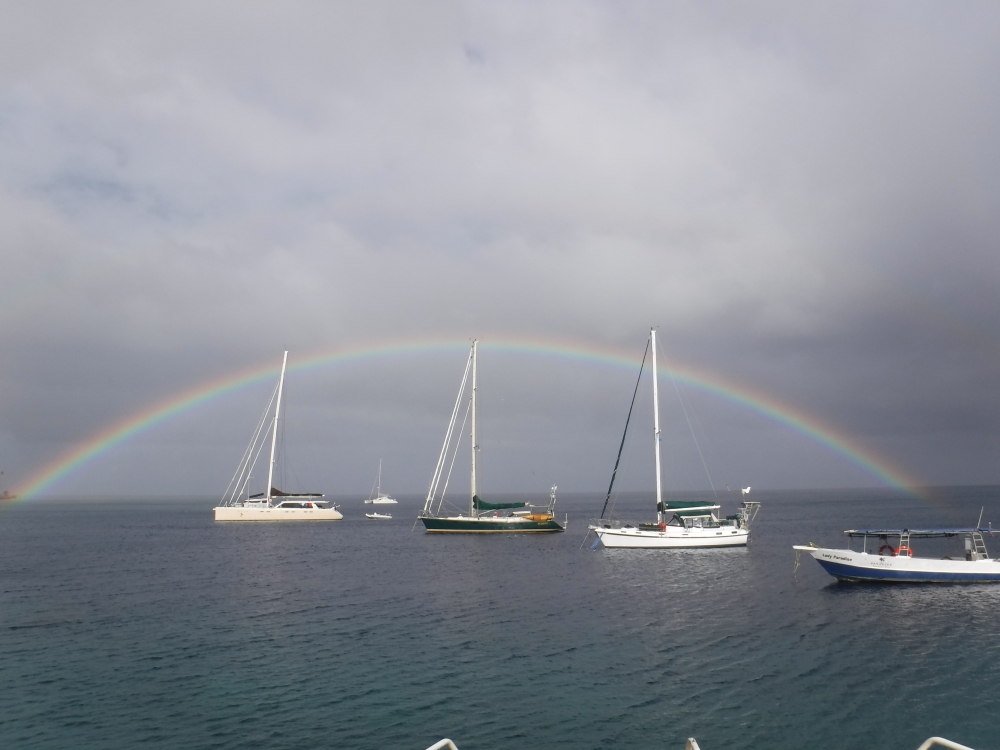