Settling into Savusavu, a trip to Labasa, and a "minor road" adventure 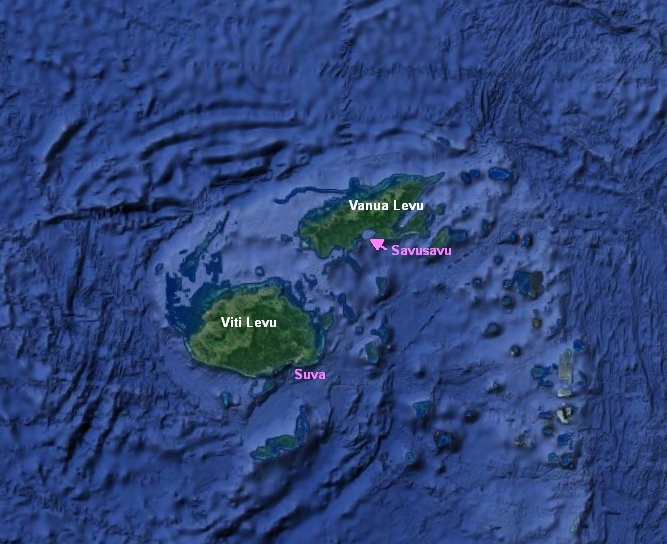 Since arriving in Savusavu, we've been readjusting to life in the tropics. From the moment we tied up to the mooring, it seems that we've been on the go. When you're a yachtie, there's always something to do...

There are ATMs to be visited, to get some of the local currency, Vodafone data and voice to be topped up, paperwork to be filled out at the marina, a cruising permit to apply for. 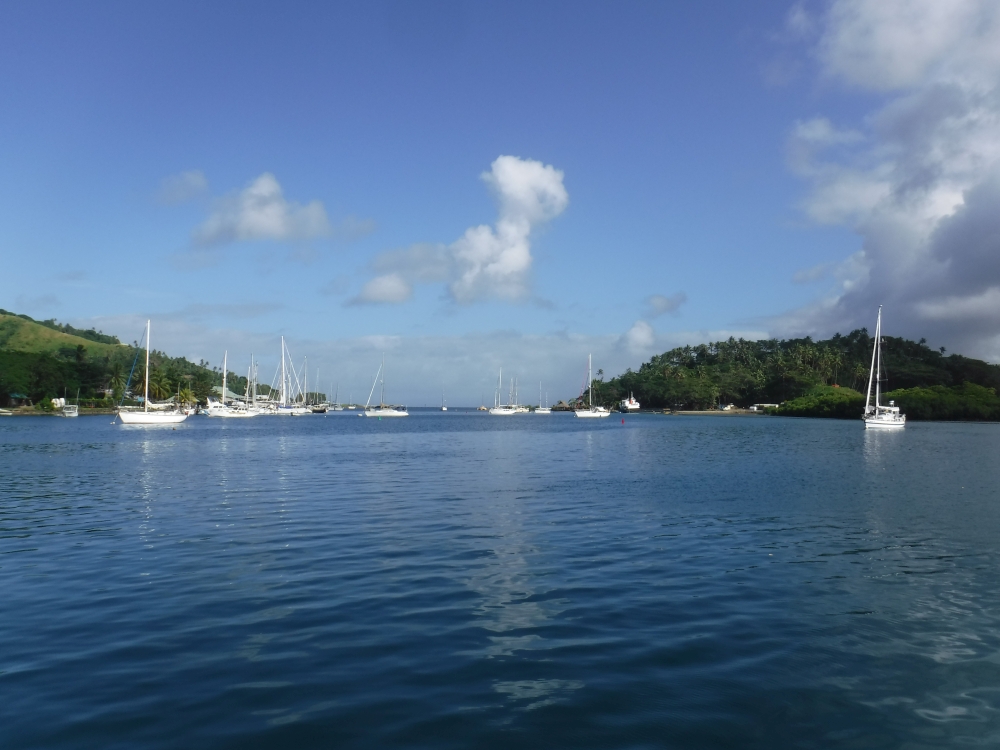 Lots of boats in the Savusavu mooring field

There are fresh, fragrant papayas and other produce to buy at the local market, and groceries to stock up on, in the grocery store. 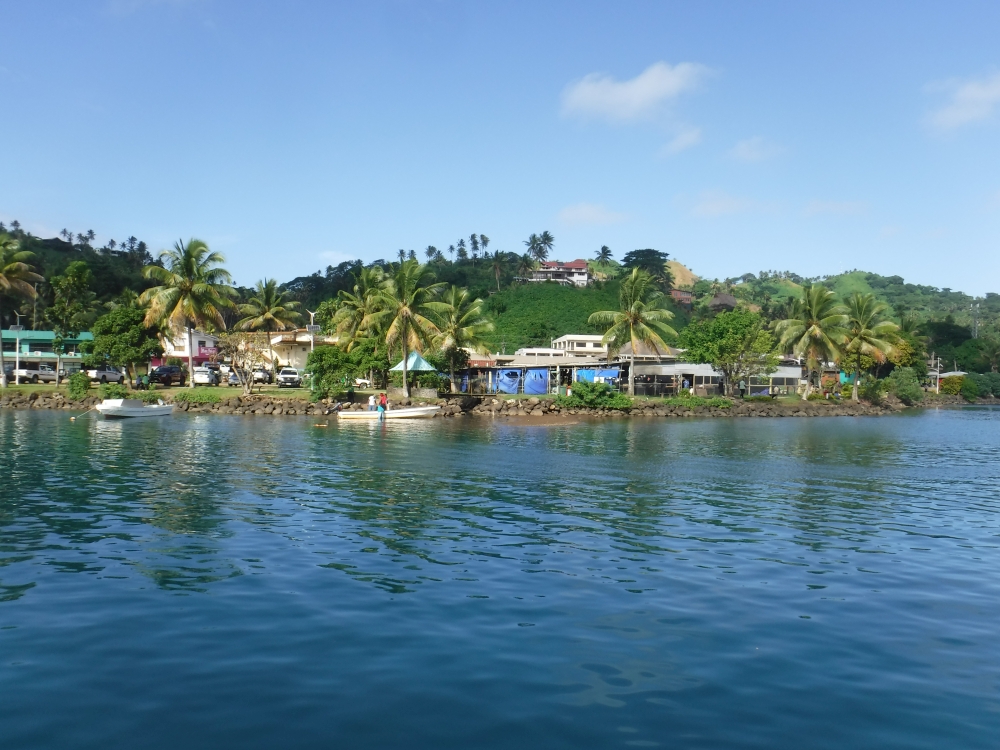 The back side of the public market, from the vantage point of our mooring

There are boat jobs to do: cleaning up after the passage, an unexpected alternator-ectomy and surgery to repair a snapped wire connector, washing the salt and bird poop off the deck, reclaiming the forward cabin as our sleeping quarters and re-Tetrising all our storage items in the aft cabin (where we sleep on passage), arranging to have two weeks' worth of laundry - including all those heavy winter items that were necessary when we left New Zealand but which would now reduce us to puddles of perspiration - washed by the local lady at the marina, re-routing the hose that carries the raw (cooling) water to Yanmar the Magnificent to make it less prone to draining out through the seacock when we're underway sailing.

There are jerry cans to fill with diesel at the gas station in town, and shuttle back to SCOOTS several times, to fill her tanks.

There are music sessions to attend, 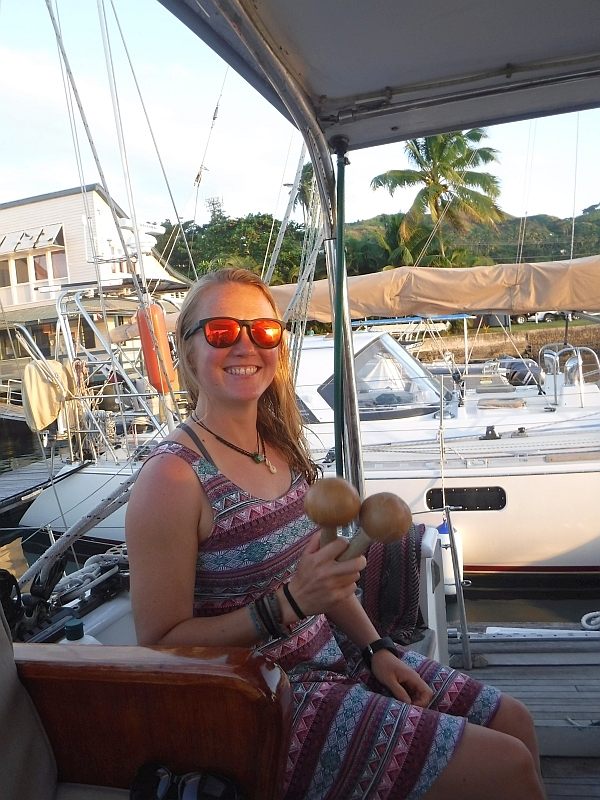 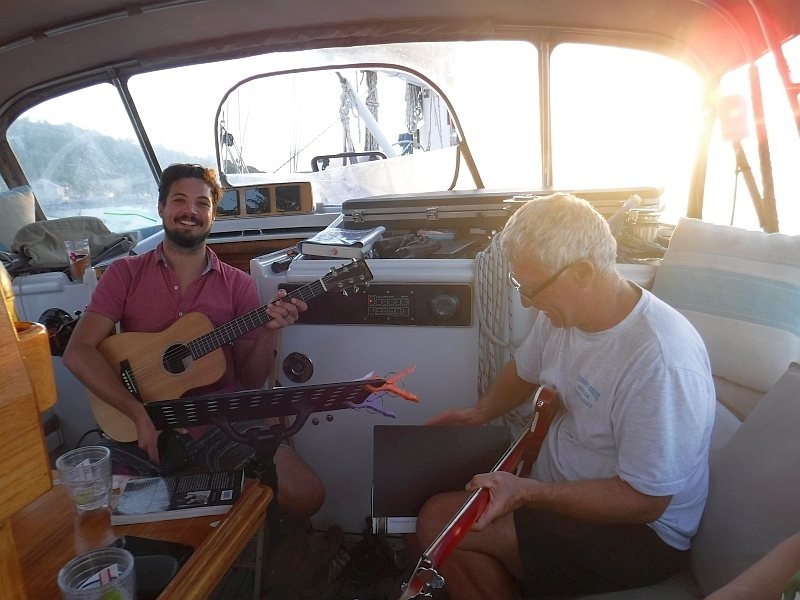 drinks and snacks and dinners to be shared with friends, 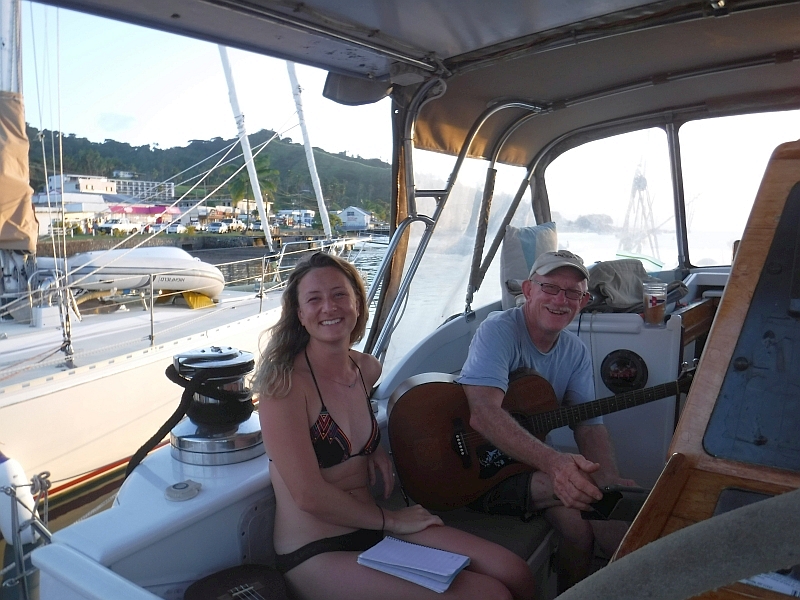 trips across the island to explore the big town of Labasa. Let me tell you about our trip to Labasa.

Dave, our friend and the captain of the boat Rewa, needed to drive to Labasa to replace one of Rewa's batteries. So, being the kind of guy he is, he asked us along to make into a fun day of exploring. Because there were six of us, and all the rental cars only held five people, Dave rented a four-door pickup truck, after being assured by the rental guy that it's legal to carry people in the back of the truck in Fiji. (Spoiler: it's not.) 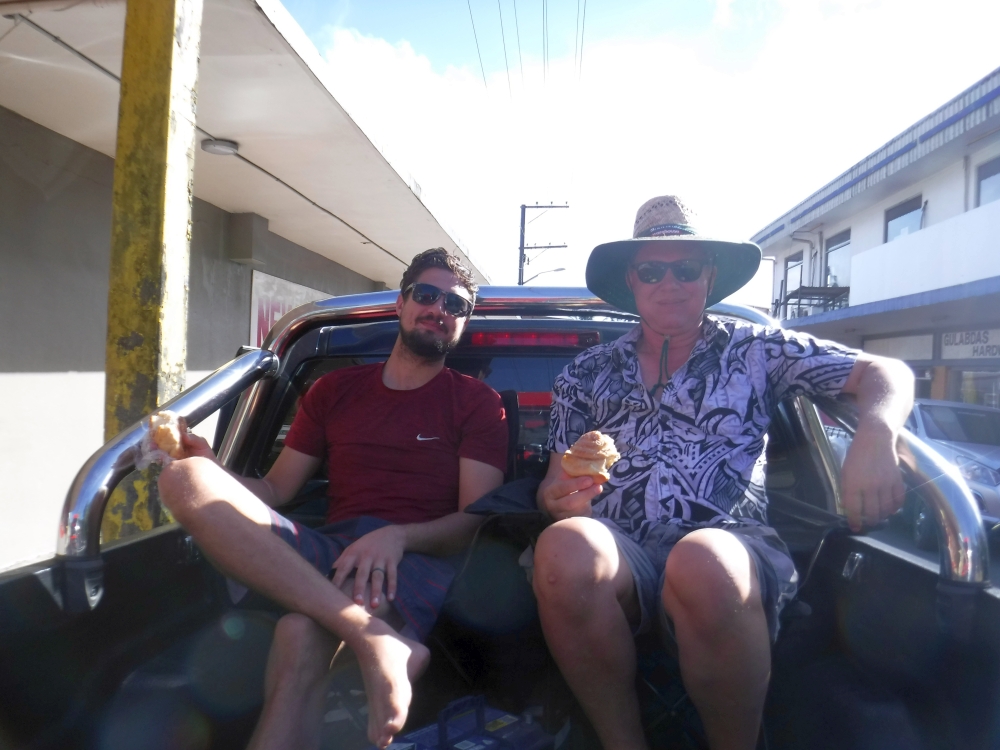 On the morning of our trip, Dave brought the truck around; Dave's daughter Tessa, her friend Heike, Dave (who drove), and I climbed into the cab; Eric, and Tessa's husband Nick, set themselves up very comfortably on lawn chairs in the back. Off we went...down the street about a half a block to the Hot Bread Kitchen, where we picked up some warm coconut rolls...and then off we went again, this time setting out across the island toward Labasa.

The road initially wound through the vibrant jungly terrain of the windward side of the island; like a green shag carpet it draped the mountains and piled up in the valleys. As we approached the leeward side of the island, the terrain changed dramatically, the jungle being replaced with spindly pine trees, scrubby deciduous trees, and yellow grasslands. All along the way, friendly Fijians smiled and waved, and shouted, "Bula!" to us

Suddenly there was a police officer, standing by his car on the side of the road, who did not smile, did not shout "Bula!" at us, and when he waved, waved Dave to the shoulder. Uh oh. After a brief discussion about how it is NOT legal for people to ride in the back of trucks in Fiji - despite what the rental guy had told Dave - Dave was handed a $50FJ ticket and Eric and Nick had to squeeze into the cab with the rest of us. Off we went to Labasa, with Eric in the passenger seat, Dave driving, and the rest of us squished, hip to hip to hip to hip, in the back seat. I became quite familiar with the left-hand door during the duration of our drive.

In Labasa, Dave found a parking spot near the public market, and we set out for the LTA (Land Transit Authority) office, where he was to pay his ticket.

After paying his ticket, we wandered through town, looking for lunch. Labasa is pretty much like most second- or third-world big towns: lots of small shops crammed together, pigeons flapping everywhere, people walking everywhere, cars moving along the street dodging jaywalkers. Change the language on the signs and in the conversations, and it could be a town in Latin America. Add motorbikes and it could be a town in Asia. I don't mean this as a slight; in fact quite the opposite:

It fascinates me how similar places - and people - can be, though they may be separated by hundreds or thousands of miles. This, I know, will be one of the lasting legacies of my nomadic travels: the firsthand knowledge of how we - the people sharing this planet - are more alike, than we are different. A fact that becomes even more pronounced, when you take the time to talk with people, and get to know them a little bit.

After lunch, we wandered back through the public market, where we purchased some kava bundles for sevusevu ceremonies that we'll do with village chiefs during our stay in Fiji. In case you're interested, the price for a kg of kava in Labasa ranges from $100-150FJ, depending on the grade of the root.

Dave sorted his new battery, and then we left Labasa, strategically avoiding the turnoff for the Trans-Island Road that would take us directly back to Savusavu, opting instead for a bit of a scenic route, to see some more of the island. Scenic, we definitely got...

The paper map that Eric had access to showed three kinds of roads: major roads, minor roads, and tracks. Tessa, having spent a very long afternoon in a rental truck bouncing along a track with Dave when they were here previously, wisely recommended that we stay off of tracks. So it was that we turned onto a minor road which, according to both Eric's paper map and Tessa's phone map, would take us from the middle of the island back to the southern coast.

And so it did. But not before subjecting us to three hours of creek crossings; bumpy, kidney-jarring rocks; games of chicken with buses whose drivers fully subscribed to the gross tonnage rule (yeah, Dave opted for the weeds rather than a gnarly death); slippery mud after it rained, and some educated guesses about which fork to take (fortunately, both Eric and Tessa had GPS working on their phones). With Dave doing a great job of keeping us on the road and out of the grills of buses, Eric and Nick helped him out by spotting potential obstacles - "Bus! Bus!", "Cow!" "Horse!" "Fijians!" "Bridge!" - and I helped out, from my strategic vantage point up against the left-hand door, by letting Dave know when a dive to the side of the road might not be a good idea - "Ditch!" "Drop-off!" "Boulders!" "Creek!" 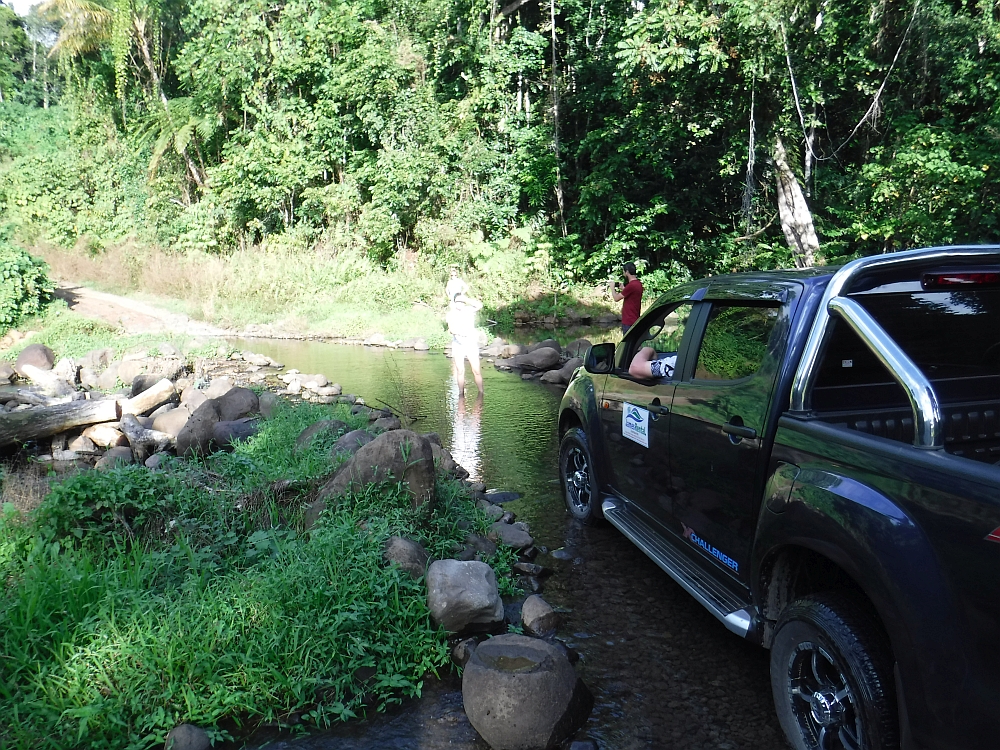 One of the creek crossings

But it was also fun to see lots of local Fijians, who offered us more smiles, "Bula!"s and waves as we passed through their remote villages, though they were probably thinking, "What the heck are those crazy kavalangis doing here?!" and to see lots of scenery and birds and people who we wouldn't have, had we stuck to the major roads.

Eventually, well after dark, we hit the paved road again. To the sound of relieved cheering, Dave turned right and drove us the rest of the way to Savusavu - on a major road. Another adventure in the books.