Stars and stripes and planets SCOOTS is anchored in lovely Viani Bay, on the eastern edge of the island of Vanua Levu.

About 50 miles from Savusavu, as the frigatebird flies,Viani Bay is the closest anchorage to the world-class diving sites Rainbow Reef, the White Wall, and others, which draw diving tourists from all over the world. 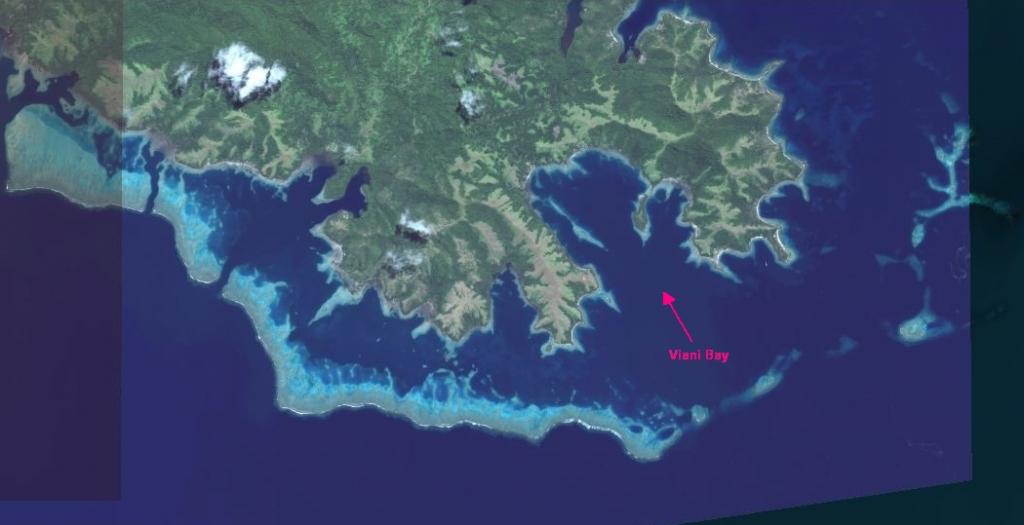 Many of whom book dives with Jone (“Johnny”) and Marina of Dive Academy Fiji, a resort and dive facility which is located on a beautiful beach here. 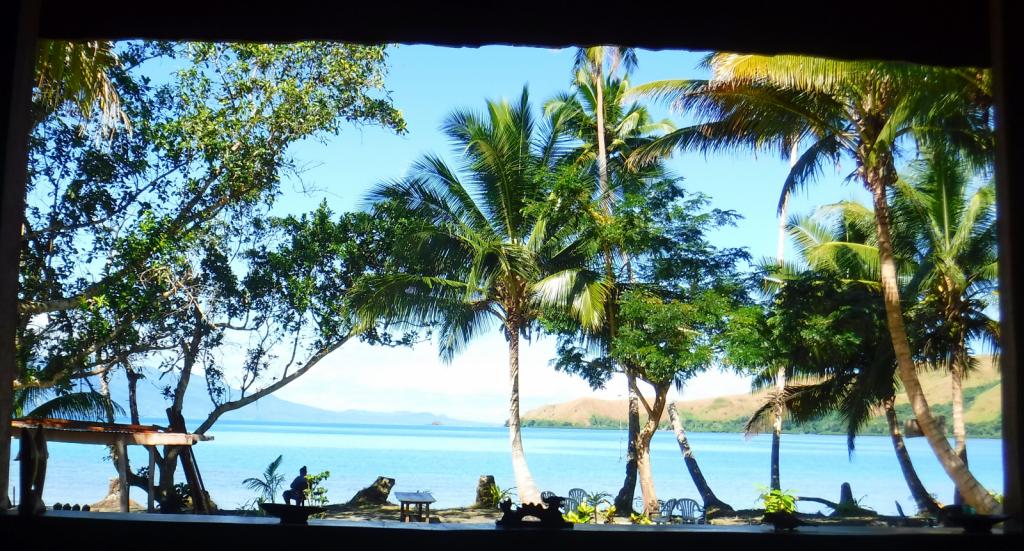 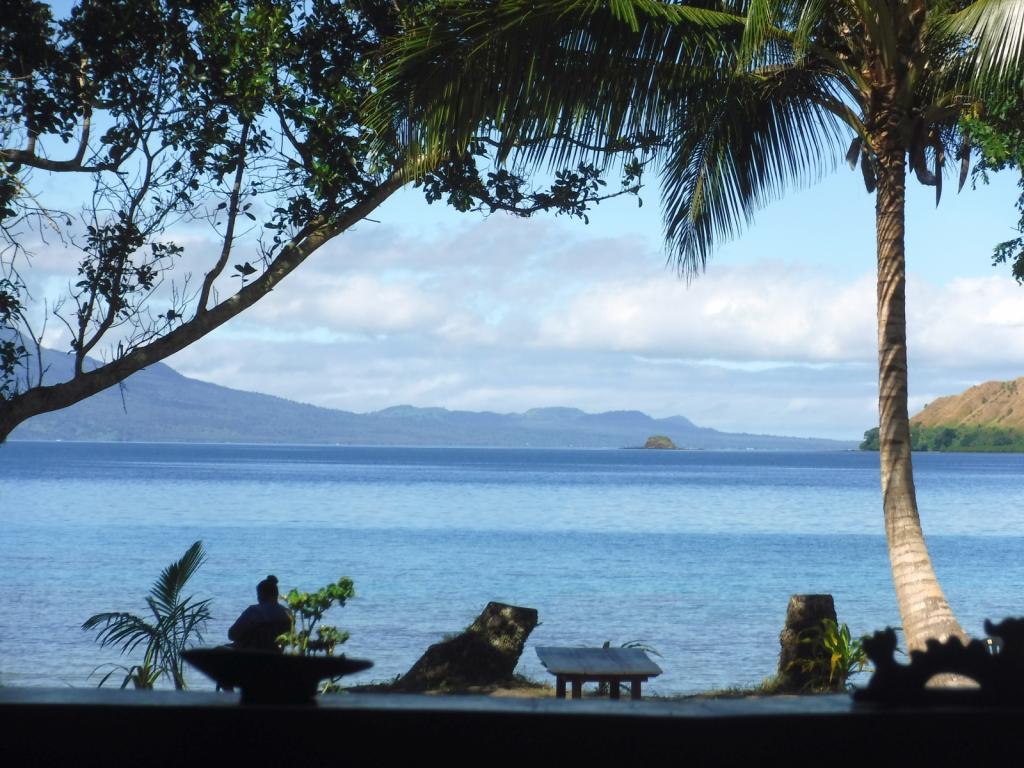 Some views from the resort

We arrived on July 2, and almost before our anchors had set, we received a call on the VHF radio from one of the dozen other boats in the bay, telling us about the Fourth of July festivities a couple of days later. There would be yoga on the beach in the morning, followed by a hike, followed by games on the beach, followed by a cookout (bring your own meat and drinks), followed by pyrotechnics. Whew, that was quite a busy schedule! The only thing missing was a greased pig race, but I imagine that we could have made that work, if we'd discussed it with the villagers who owned the pigs in the pen next to the resort.

But first, we had other plans.

Eric had a hankering to go stargazing: The moon was new, the bay very dark, and the sky had been cloud-free and painted with millions of dazzling stars the previous two nights. This seemed like a good time for Eric to bring out his telescope. IF we could find a suitable place to set it up.

In the five years that we've been living on SCOOTS, this would be only the second time that Eric used his telescope; the first one being at a friend's cabin in the hills in New Zealand, when SCOOTS was at the dock. The problem is that because we can't use the telescope on the boat (it moves way too much), we have to bring the telescope to land, which usually means a beach landing, and always means transporting it in a dinghy in the dark. All kind of nerve-wracking propositions when you're dealing with a one-of-a-kind, not-particularly-robust, definitely-not-waterproof telescope.

To this end, Eric, I, and Dave from the boat Rewa, dinghied around the bay, looking for a suitable beach for stargazing. After the first few beaches were unsuitable – they were too far away from SCOOTS, or they were too close to homes with lights, or they would submerge at high tide, Dave said he knew of a place that just might work for us. We beached the dinghy near the resort and Dave led us on a hike along the shore and through the woods until we came to a long, wide, white sand beach behind which was a large, modern home with a soft, grassy lawn pockmarked with land-crab holes. Hmm. This definitely had potential.

Dave asked around and discovered that the house was owned by a foreigner, but the caretakers – a local Fijian couple and their kids – lived in a small house near the back of the property. He and Eric approached them and got their permission for us to bring Eric's telescope ashore to do some stargazing. A bundle of kava sweetened the deal.

We moved SCOOTS and Rewa the following morning, anchoring off the beach by the house. 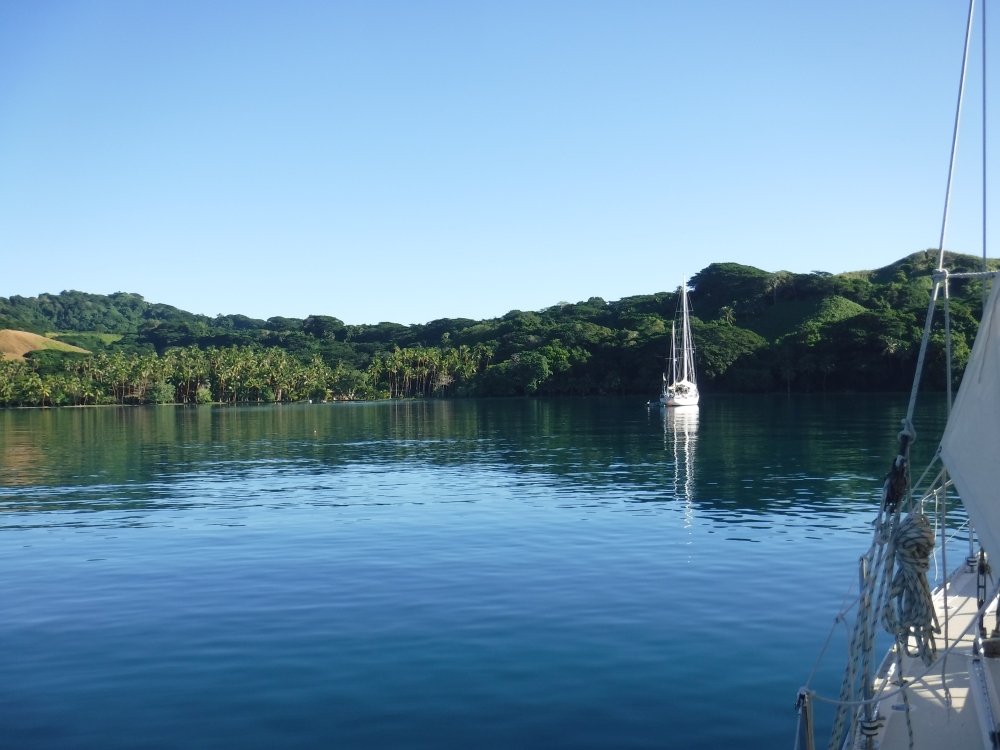 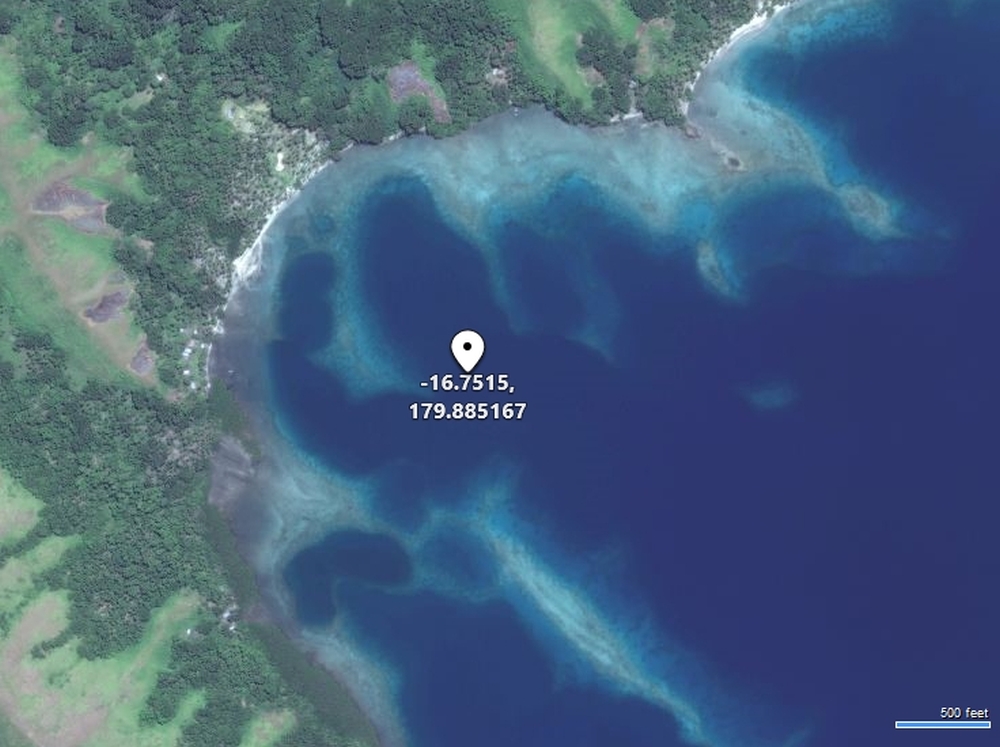 SCOOTS' anchor position...lots of coral around

Late in the afternoon, Eric and I loaded our dinghy with his telescope (wrapped in a big garbage bag), the eyepiece box, several stargazing guidebooks, red flashlights, drinks, snacks, folding chairs, and a small folding table, and headed for the beach. The landing was easy, and we soon had all the gear up on the lawn, where Eric was happy to find a path made of large round cement pavers, the perfect size to support his telescope. 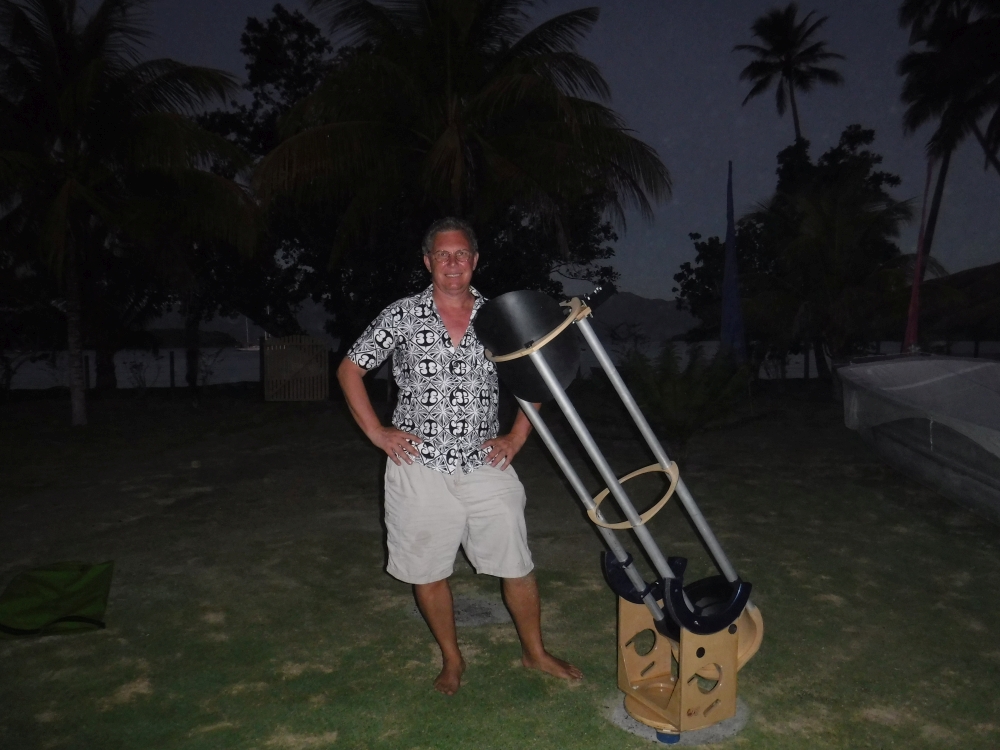 Eric and his telescope

As dusk fell, the crew of Rewa dinghied to shore with dinner for all of us, and the Fijian caretakers came by to see the crazy kavalangis and their telescope. Jupiter was up early, and was easy to spot. It looked great through the telescope, with its multi-colored bands and even some moons making an appearance. It was especially fun because one of the moons disappeared behind Jupiter during the course of the evening. Everyone who saw it was suitably impressed.

For several hours, Eric had fun finding objects in the Southern sky, and showing them to us. We saw Omega Centauri, the largest globular cluster in the sky, the spectacular Eta Carina nebula, and other more obscure NGC objects near the Southern Cross. I enjoyed seeing my passage buddy, the constellation Scorpius, with its spiky stinger and red heart. Later we moved into more familiar territory and looked at some objects in Sagittarius.

The next day was July 4th, with its full schedule of events.

Eric and I opted not to attend the yoga session, but we wanted to do the hike. You may (or may not) recall my unrequited quest for the fabled and elusive orange dove last year. The forest surrounding Viani Bay is one of the places where this bird has been reliable spotted – by everyone, it seems, but me. There is even a particular tree, near a particular house in the woods, where it reliably roosts. I spent hours last year in these woods, scanning the canopies of all the trees by this house, with no orange dove to show for it. I was hoping for better luck this time around.

After the yoga participants finished their exertions, a whole troop of us set out on the hike. I won't string you along: I didn't see the dove on the hike. I did see a few other, non-orange-dove birds, and it was a fun time. The dozen or so of us tramped noisily for a couple of hours, found and picked some little hot peppers and ripe mandarins, got a little bit lost, found our way back to the trail, and enjoyed the view from the top of the hill. 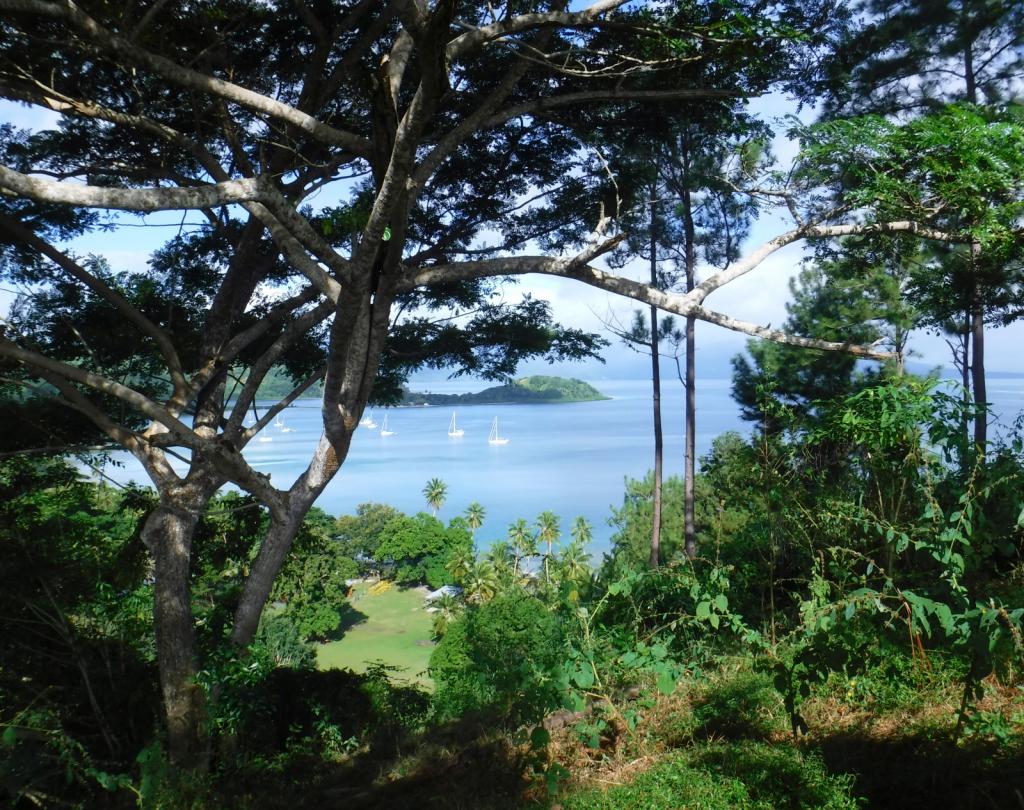 The evening was a festive occasion of conversation, drinks, grilled sausages and fireworks. Well, the yachties' version of fireworks, anyway: a bunch of us had brought some of our expired signal flares to shore, and had a good time lighting them on the beach, and shooting them out over the bay. The exercise was informative, as well as impressive: we now know that flares that are almost a decade out of date will probably still work, AND we all decided that the parachute-type of flares is much better than the hand-held ones...the thought of having a hot flame near a rubber liferaft seems like a bad idea. 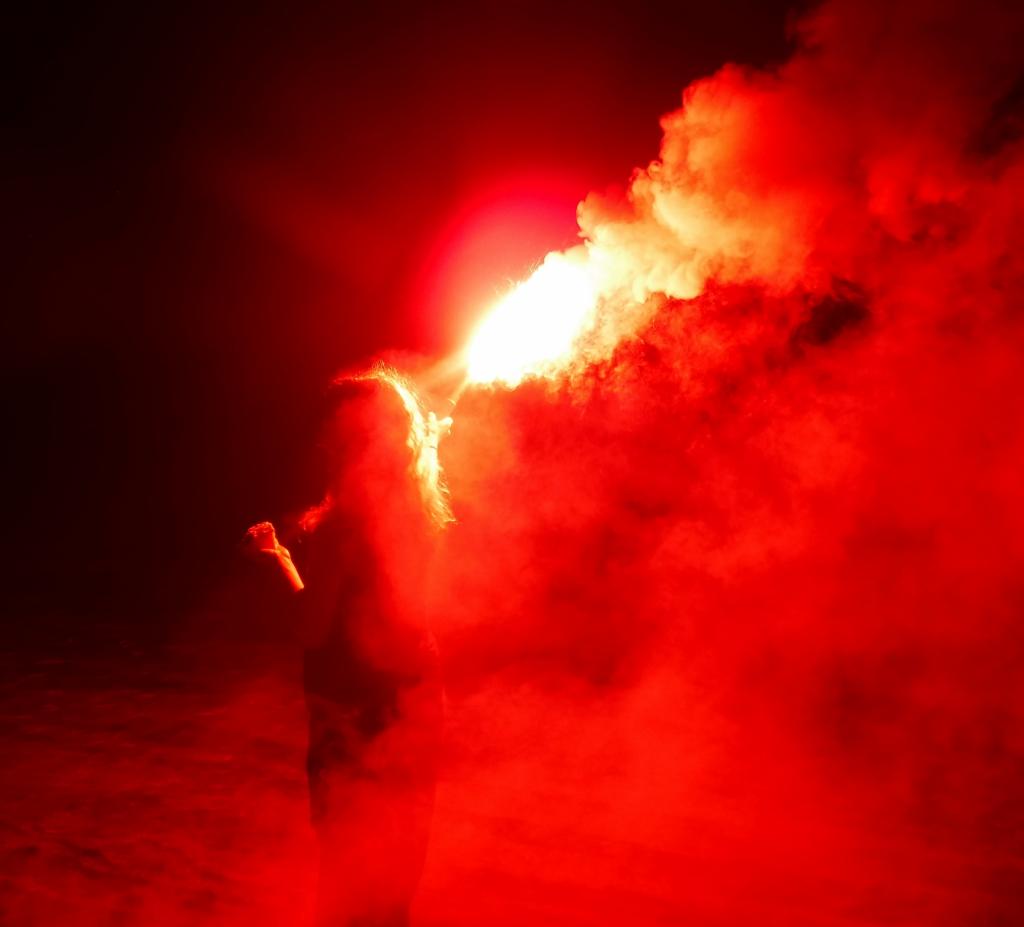 Tessa with a flare, Statue of Liberty style