Every once in awhile, we get a clear reminder of the volcanic origin of the islands in this part of the world. A bay will be shaped suspiciously like a flooded caldera...or a mountain will look remarkably like a cinder cone...or a beach will be composed of jumbled lava rocks...or steaming hot springs will bubble up out of the ground.

Sometimes, it's more than just a reminder; it's in-your-face, such as when, in 2015 the island of Hunga Tonga – Hunga Ha'apai rose from the ocean, formed from a previously submerged volcano.Hunga Tonga


Or, as happened a couple months ago, some yachties sailing in northern Tonga found themselves surrounded by a massive pumice raft, about the size of Manhattan Island. Yachties encounter huge pumice raft at sea.

Accompanied by steam plumes and a sulfury smell, this pumice was the result of the eruption of a nearby underwater volcano.

Since then, the pumice raft has drifted west and broken up into smaller chunks, appearing first in the Lau Group of islands in far eastern Fiji. Later, following the path of Captain Bligh, pumice continued drifting west through the channel (aptly named Bligh Water) between Fiji's two largest islands – Viti Levu to the south and Vanua Levu to the north – and on to the Yasawa Islands of the western region.

This past week, as we traveled east along the northern coast of Viti Levu, we heard reports of pumice from other yachties in the area, but we didn't see any ourselves. Until we sailed across Bligh Water from northern Viti Levu to the southern Vanua Levu a couple days ago.

SCOOTS' track from Volivoli to Savusavu

As we entered the barrier reef around Vanua Levu, we began to see streamers and small rafts of pumice floating in the water. 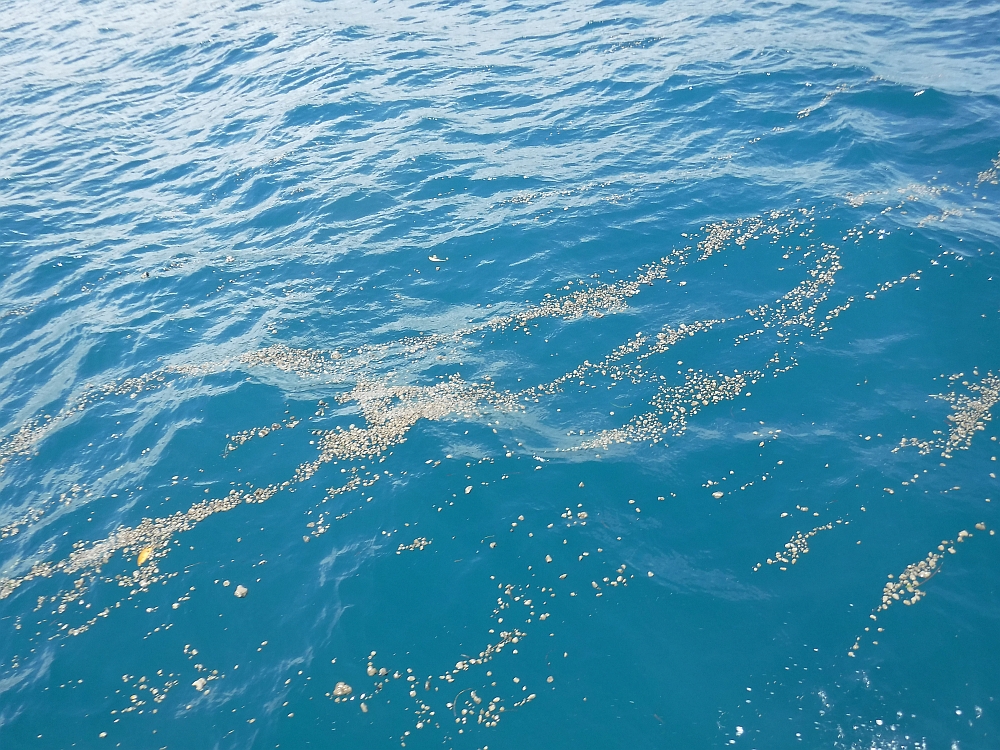 Floating rocks...how cool is that?! That's not something you see every day. 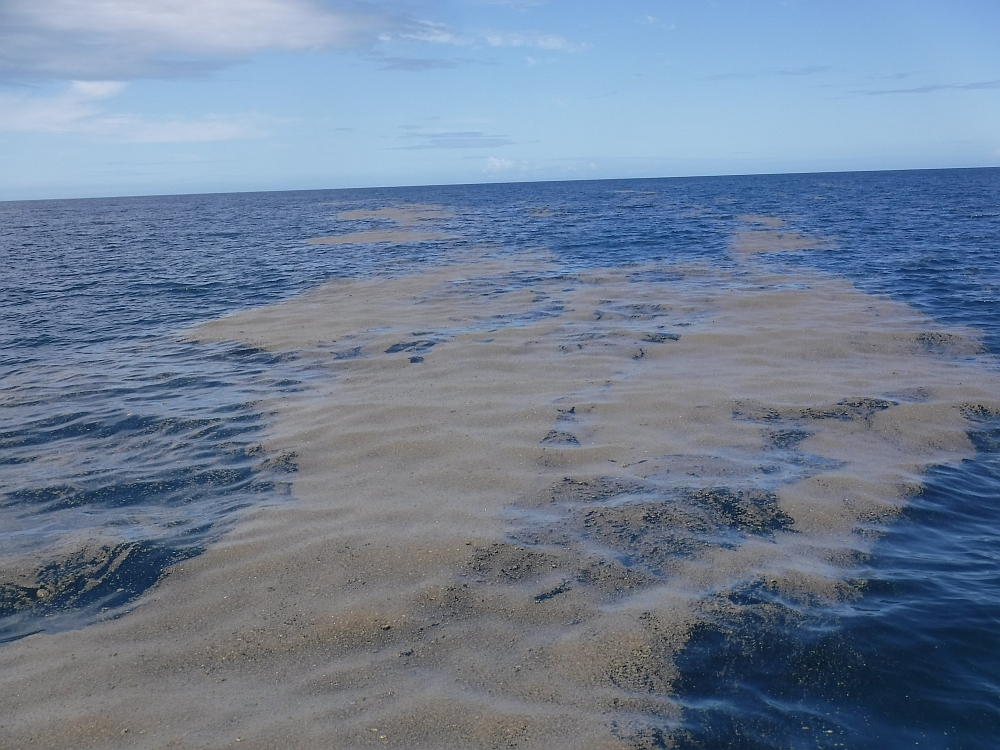 Though mostly comprising rice-sized bits, there were also chunks about the size of marbles, golf balls, croquet balls, and bowling balls. Choose whatever sport you want; balls of that size were probably represented in the pumice rafts. 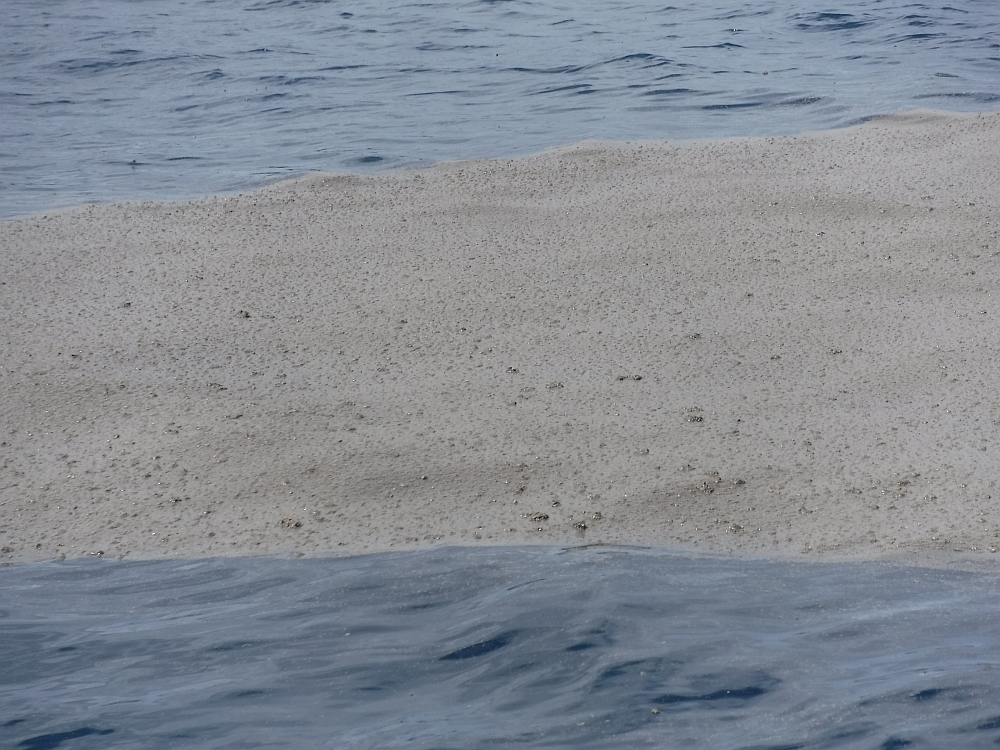 If a pumice raft is deep enough, it could cause problems for a boat, such as clogging the water intake of the engine (now you can't use your motor); fouling the rudder (now you can't steer); or abrading the hull (now you need a new paint job). The rafts we saw were less than an inch thick; SCOOTS' engine intake is two feet underwater, and covered with a grate to keep out all but the smallest bits, so we weren't especially worried. Though we did steer around the larger rafts when we could. Why ask for trouble?

A boat coming the other way called us on the VHF to tell us that he'd just come through Nasonisoni Pass, which was “full of pumice.” He'd transited the pass under sail, downwind, with his engine off, to minimize the possibility of those problems I mentioned. Yikes, we thought. “Full of pumice.” That sounded intimidating.

We were scheduled to transit Nasonisoni Pass the next morning, going the opposite direction, straight upwind. Tacking up narrow Nasonisoni Pass into 10-15 knots of wind wasn't a particularly delightful proposition. Was there really that much pumice? we wondered.

Soon after our radio conversation, we dropped anchor in Nadi Bay, a lovely spot with beautiful green, jungle-draped hills that sweep right down to vibrant, mangrove-lined shores. 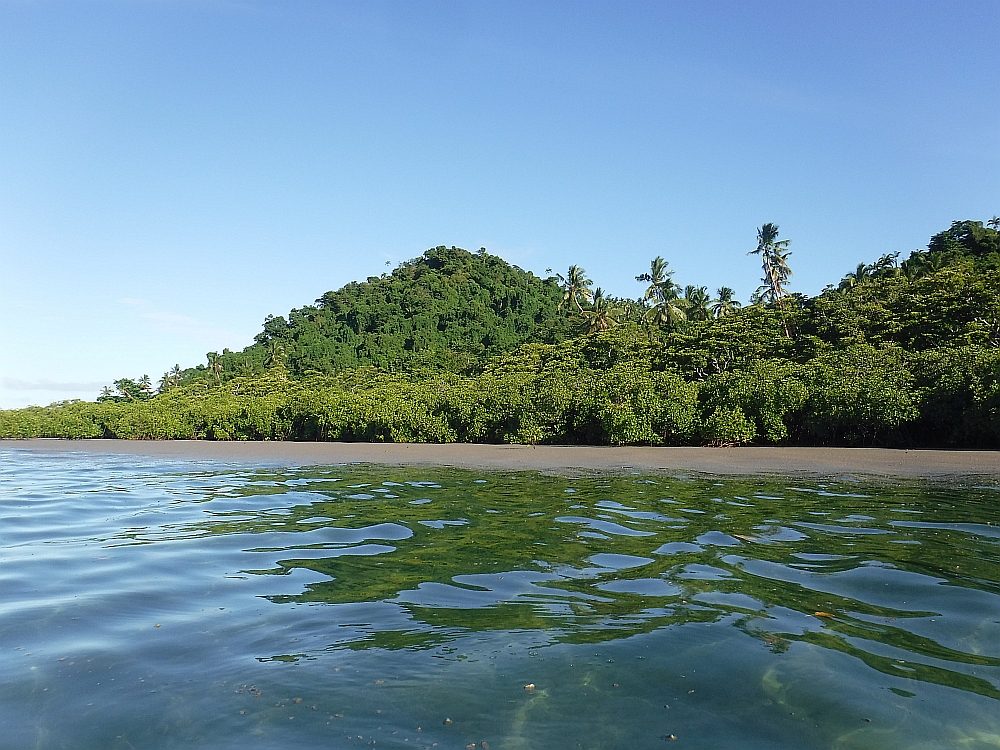 It also had pumice. Lots of it. 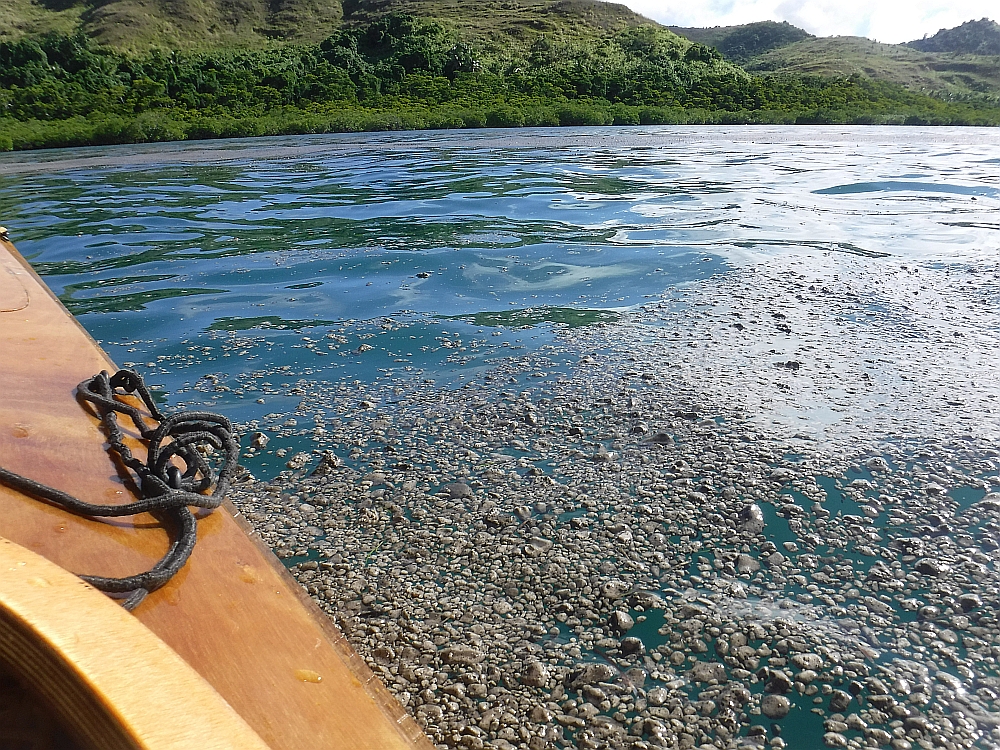 We wondered if this was a preface of what was to come, as we continued farther east. 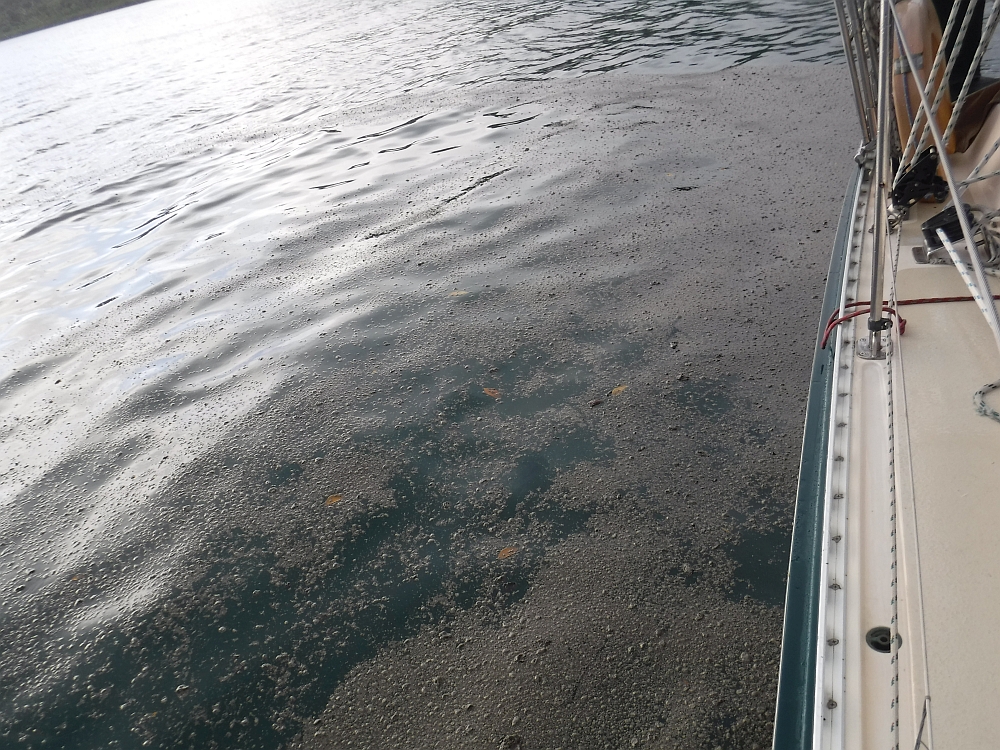 Just to be safe, we consulted with our old buddy, the Prudent Mariner, to get his take on the situation, and came up with some contingency plans....

IF, on reaching Nasonisoni Pass, we discovered it to be chocka (that's Kiwi for “really full”) with pumice, we'd wait awhile, to see if the tidal action cleared it out. If it didn't, we'd take a longer way around. Alternative routes added 10 miles and 17 miles to our 35-mile trip, so we weren't keen to do that unless we really had to.

IF, on reaching Nasonisoni Pass, we found a “reasonable” or “negligible” amount of pumice, we'd transit the pass under motor, as we normally would, avoiding as much of the pumice as we could.

IF, during our transit of Nasonisoni Pass, Yanmar the Magnificent stopped running, we'd do a quick U-turn, pull the staysail out (it's the easiest one to handle quickly), and sail back out the pass downwind.

So, with our backup plans in order, we pulled up SCOOTS' anchor at 7 am the next morning, and headed toward the pass. We'd scheduled our transit to be close to low tide, hoping that if there was a lot of pumice, it might be stranded on the exposed reefs that lined the pass, rather than floating in the pass itself. 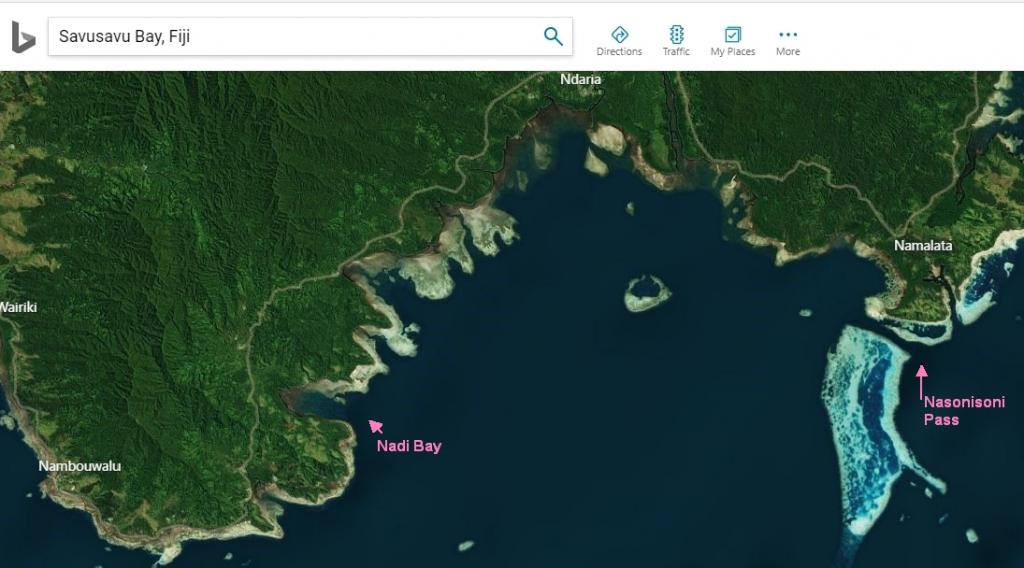 Maybe we were right, or maybe there just wasn't that much pumice around. As we motored along toward the pass, we saw some thin pumice rafts, but nowhere near as much as we'd seen in Nadi Bay. Nearing the entrance to the pass, we peered ahead, and scanned with our binoculars...almost no pumice at all. The ebb current caught SCOOTS and began to sweep her through the pass, adding a knot or more to the speed provided by Y the M. In fifteen minutes, we were through the pass without incident. We're not sure why our yachting friend had found the pass full of pumice, but I'm happy to say that we didn't.

So, for us, the pumice among us was just a really interesting side note to our travels in the South Pacific.