We'd told Tara, Peyton, and Vanilla Chief that if you're a cruiser, it's pretty much a given that anywhere you go in your dinghy, you'll arrive with a wet butt. The next day, when we took the dinghy around the corner to the beach at Castaway Resort, looking forward to a hike up the hill and lunch at the resort restaurant, wet butts would have been preferable to the complete soaking we received from slogging through the choppy waves. (Our dinghy doesn't plane with five people on board.)

“We would've been drier if we'd swum here!” Eric announced, as he guided our dinghy through the shallows toward the beach. Dripping from head to toe, as we all were, Tara, Peyton, and Vanilla Chief were good sports, taking their dousing in stride, with good humor. And why not? The weather was warm and sunny, the company friendly, the scenery spectacular. We were together in Fiji! The Flying Piantanida Sisters in Fiji

Walking the meandering paths through the resort's grounds and the bush walk up the hill behind the resort, was a scenic way to stretch our legs. The trail included not just one but two vista points, each offering spectacular views from a different side of the island. By the time we'd hiked up to the top of the hill and back down, our clothes were dry, and we were ready to enjoy lunch on the deck of the resort's beachside restaurant.

Our friends, Chuck and Lauri, anchored their boat, Free Spirit, near SCOOTS, and invited all of us over for drinks and snacks (“ginner”), giving Tara, Peyton, and Vanilla Chief their first opportunity to experience the fun and warmth of the cruising community.

Anchored off Castaway Island, Eric and I were happy to see Tara, Peyton, and Vanilla Chief slipping the yoke of their fast-paced life back home and relaxing into the slow tempo of cruising life and Fiji time: enjoying a slow pace, an unscheduled existence, and freedom from such nuisances as wearing shoes or makeup, shaving, and wearing a different outfit every day.

When we were ready for a change of scenery, we moved to the lagoon at Mana Island, about four miles away, where we received several more soakings in the dinghy on our way to and from shore. The next day, having learned that the extensive coral near shore made getting our dinghy to the beach at any time other than high tide nearly impossible, Eric dropped the rest of us off at the floating dock at the pier. Tara, Peyton, Vanilla Chief, and I enjoyed a day at the resort, lounging by the pool, visiting the turtle sanctuary, exploring the tide pools at low tide, and being charmed by the fruit bats who swooped in, late in the afternoon. 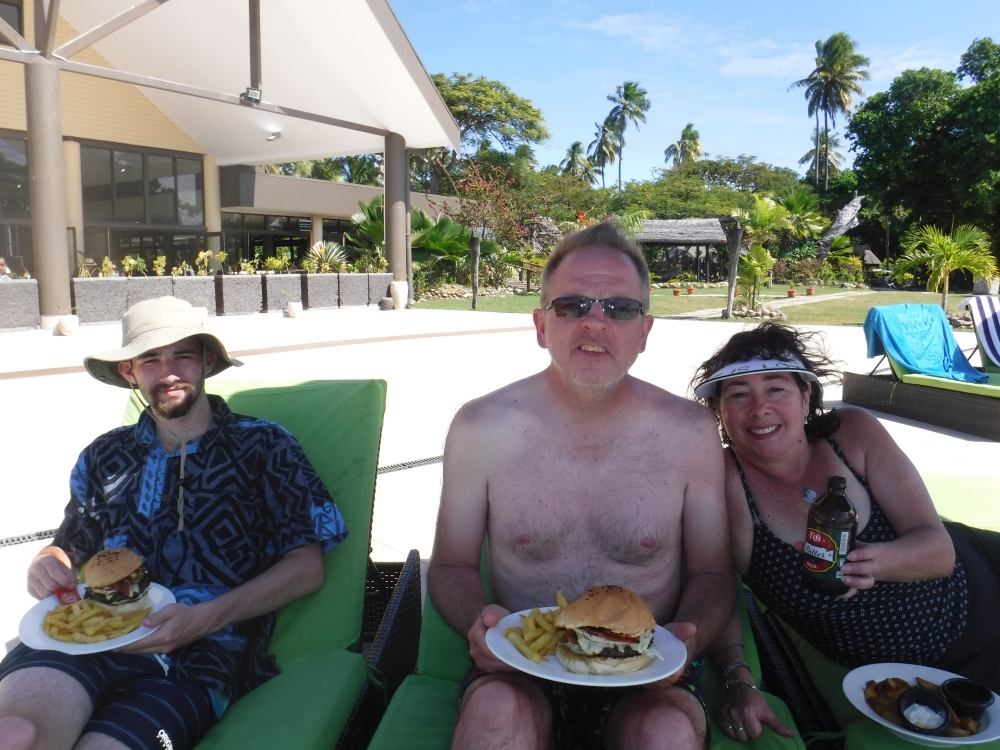 The next day, we motorsailed eight miles to Monuriki (AKA Tom Hanks Island), crossing, in the process, a stretch of water that wasn't protected by a barrier reef. Here, the ocean waves rolled through unobstructed. About a meter high on this day, they caught SCOOTS on her stern quarter, rolling her first one way, and then the other, in a corkscrew motion. Though we hadn't known beforehand whether Tara, Peyton, or Vanilla Chief were prone to seasickness, I'm happy to report that apparently they're not.

A visit to Monuriki is a must for anyone in the Mamanucas. This is the island where the movie Castaway was filmed. It's a stunningly beautiful place, with white sand, green palms, and water in every imaginable shade of blue. Though uninhabited, it's inundated with several boatloads of tourists for a few hours each day beginning at about 11:30 am. We arrived from Mana Island just as the Jolly Bula sailboat disgorged a couple dozen of them. As we pulled our dinghy up the beach, a Fijian man came by and told us that his village – “Over there, at Yanuya Island”– now requires a $10FJ per person “landing fee.” This was a new development since our visit two years ago. We wondered if it was actually the tour vendors who were extracting the fee, rather than the villagers. Tara graciously paid for all of us, since Eric and I hadn't brought any money to shore.

We explored the island's beaches and took a short walk through the jungle, looking for places that we'd seen in the movie. 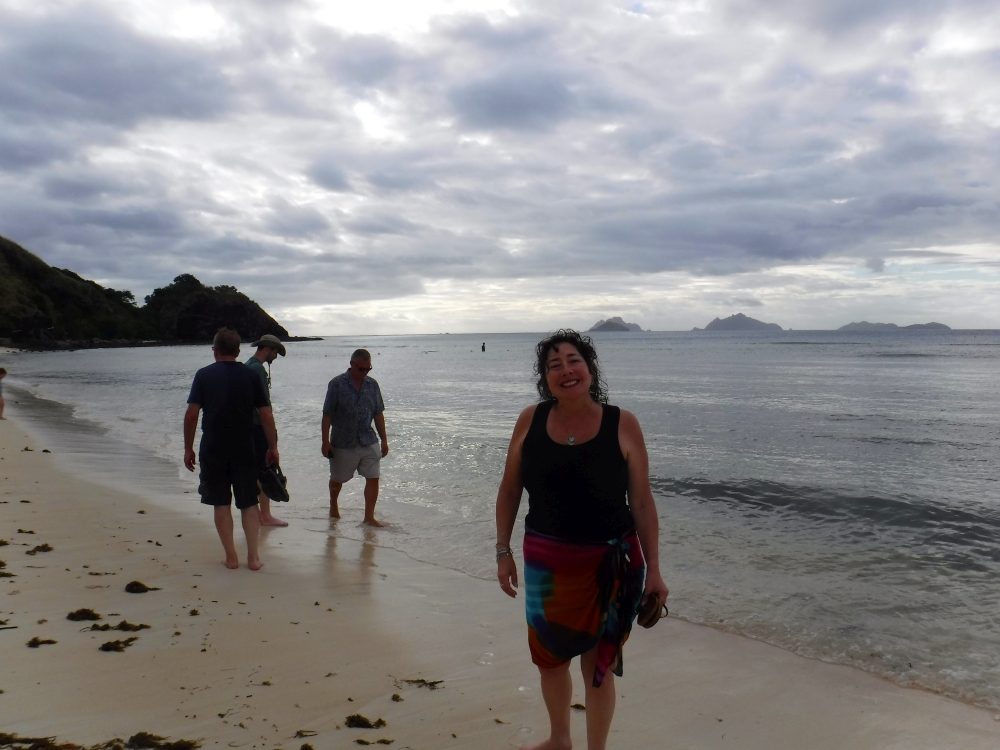 Peyton shouted,“Wilson!” On a sandy hillside, the words “Help Me” were spelled out in coconuts. We laughed at how, had Tom Hanks looked out from the island in any other direction than the one he always did in the movie, he would've seen lots of other islands, many of them inhabited. After an hour or so, we returned to our dinghy, and, with careful timing and speedy execution by all, successfully boarded the dinghy and got out past the breakers. Successfully, but not without incident: Tara picked up a trio of “cruise bruises” in the process. Ouch. The marks of a true cruiser!

We sailed SCOOTS to the other side of Mana Island this time, dropping her anchor a few hundred yards off the long white sand beach, and enjoyed a couple days of snorkeling, swimming, and relaxing at this beautiful island paradise.

Musket Cove, on Malolo Lailai Island, was our next stop. With its large resort and cruiser-friendly atmosphere, as well as being a gorgeous spot, Musket Cove was another place we wanted to share with our family. Tara, Peyton, and Vanilla Chief loved relaxing by the resort pool, 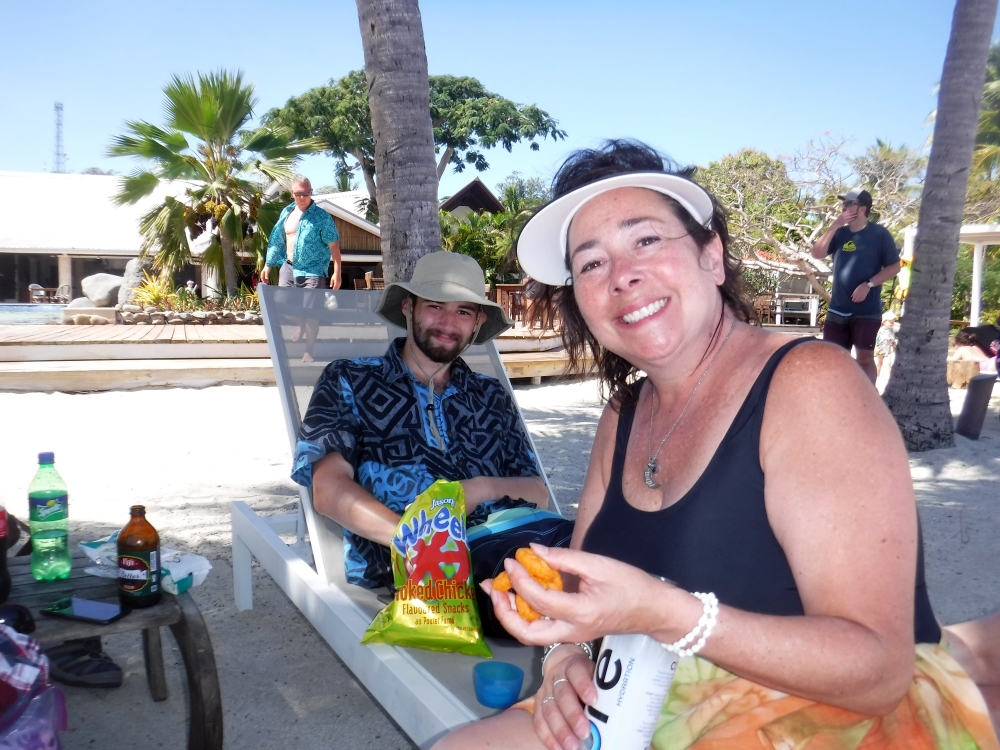 Chillin' by the pool at Musket Cove

and hanging out with some of our cruiser friends at the nightly cruisers' potluck at the Island Bar. While at Musket Cove, we attended a kava ceremony put on by the resort. It was really well done! The man who acted as MC had a good sense of humor and also shared a lot of Fijian culture and history with us. As well as plenty of yaqona (the Fijian word for kava). As the eldest man present (by virtue of being one month older than Eric) Vanilla Chief was chosen to preside over the ceremony. 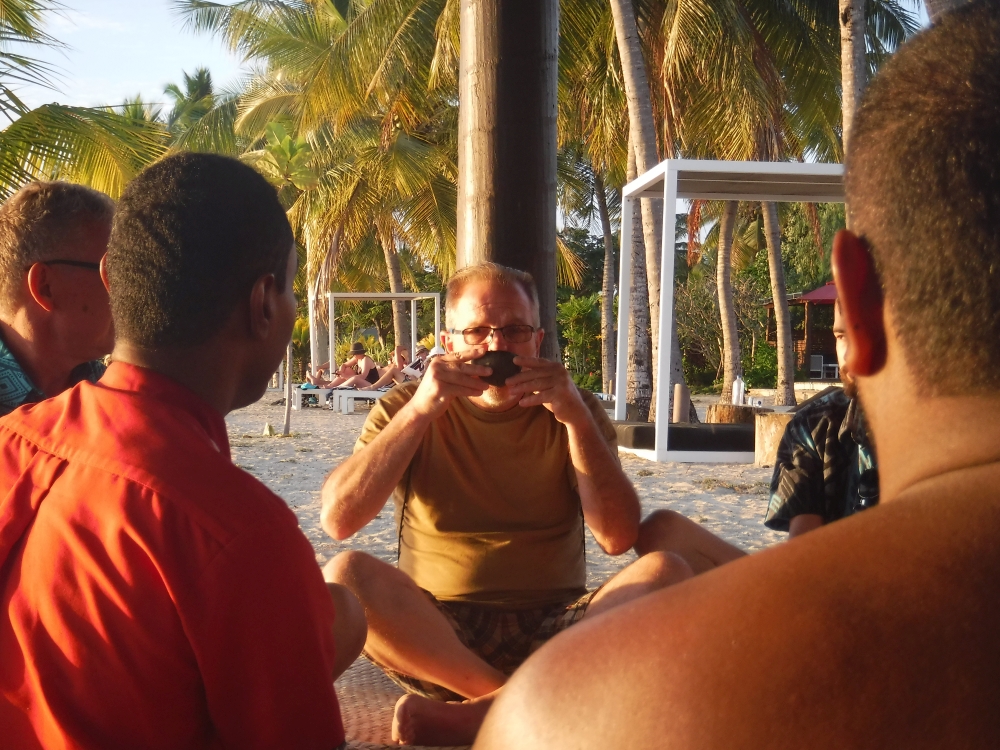 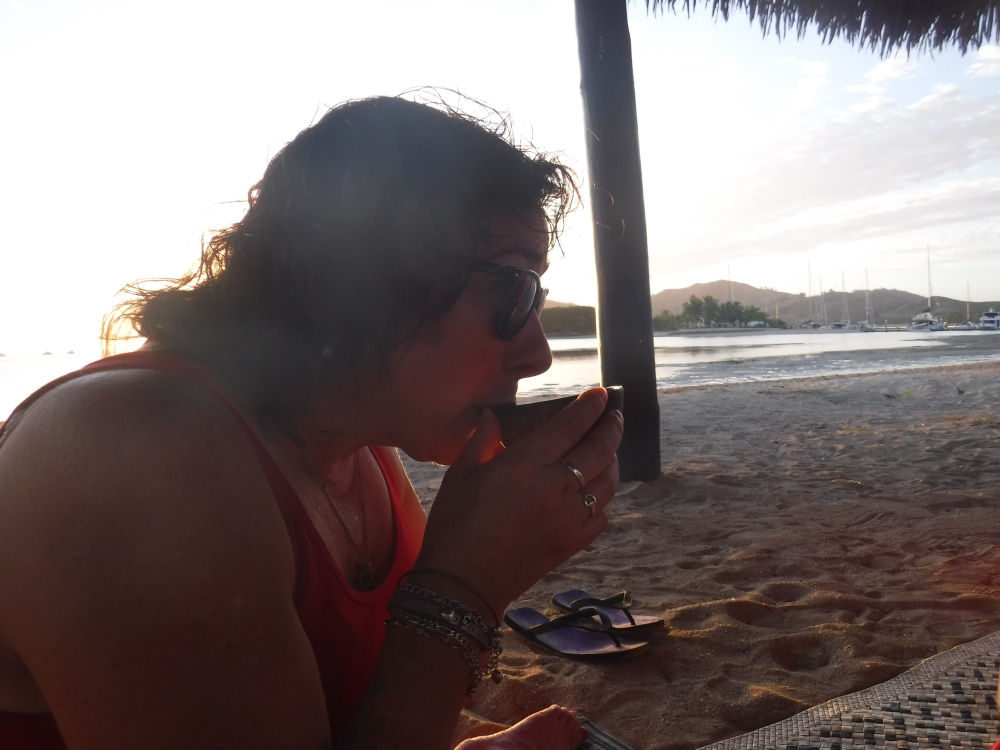 Afterwards, we enjoyed a Fijian feast (complete with spit-roasted pig) and a meke (Fijian singing and dance). A full masti Fiji experience!

Now we are Seven

A couple of days later, we said goodbye to Musket Cove and motorsailed across to the “mainland” (the big island of Viti Levu), anchoring at Saweni Bay, just south of Lautoka, to await Kelly and Daniel's arrival the next morning.

Our taxi driver friend Raj picked Kelly and Daniel up at the airport and brought them to the beach at Saweni Bay, where Eric and I were waiting. After hugging Kelly and Daniel, we arranged for Raj and a friend to come back with two cars later in the day to transport all of us to Lautoka. We loaded Kelly and Daniel's bags into our dinghy, got in, and zipped back to SCOOTS, where Tara, Bob, and Peyton were waiting with more greetings and hugs.

In the afternoon, we all dinghied to shore, glad for the flat-calm water, as this was the first time our dinghy had transported seven people; had there been any texture to the water at all, it would have been a very, very wet ride. Raj and his cousin were waiting for us in matching Priuses, and after we split up into the two cars, they whisked us off to Lautoka.

We had two reasons for visiting Lautoka: first, we needed to do some more provisioning. Second, we wanted to show Kelly and Daniel a Fijian town. We accomplished both, and more, as Raj and his cousin acted as tour guides during our ride into town, pointing out such attractions as the tracks for the narrow-gauge sugar cane train; the rum distillery, its parking lot jammed with dozens of flatbed trucks piled high with bundles of sugar cane; the sugar mill; and the huge pile of pine chips that gets sent to China on ships and sold back to Fiji as particle board.

Our first stop was the public market. Walking along the aisles, between tables piled high with different local fruits, vegetables, or kava, Kelly and Daniel got to see how we typically shop for our produce. After the public market, we walked down the crowded sidewalk, stopping into Naginda's to check out their selection of Bula shirts, eventually ending up at the shiny Tappoo City mall, where we had lunch at the food court and shopped for groceries at Extra, the clean, modern supermarket. Waiting outside with our full shopping cart, we called Raj who, along with his cousin, turned up five minutes later, to take us back to Saweni Beach. 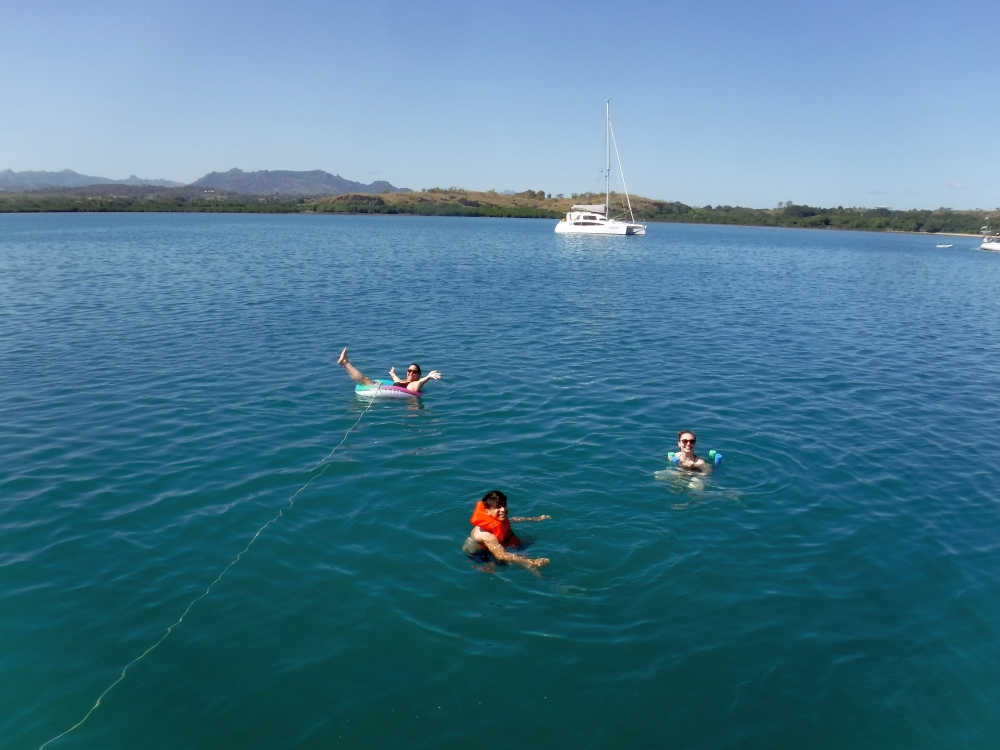 Enjoying a swim in Saweni Bay

The next morning, Kelly, who gets plenty of experience with mud and anchors for her job at the USGS, helped me pull up SCOOTS' anchor. She sprayed the cylinder of thick, gooey mud off the anchor chain, while I ran the windlass. Anchor up, we were off to our next destination: Cloud Nine.

P.S. If you're wondering about the term Full Masti!, I explain it in Part 1