Ancient cities, boat bombs, the outside of a castle, reunited with our stuff [Many of the pictures are at the end]

I'd read about Pompeii and Herculaneum (Pompei and Ercolano, if you're Italian) in my high school Latin class, back in the olden days, when the eruption hadn't been quite as long ago as it has now. I was fascinated by the stories of the events, by the casts of the victims, by the artifacts that were found, but I never expected to visit either town. And then, I turned up in Italy, and found myself in the shadow of Mount Vesuvius, with Pompei and Ercolano almost in my backyard...well, of course we had to visit! 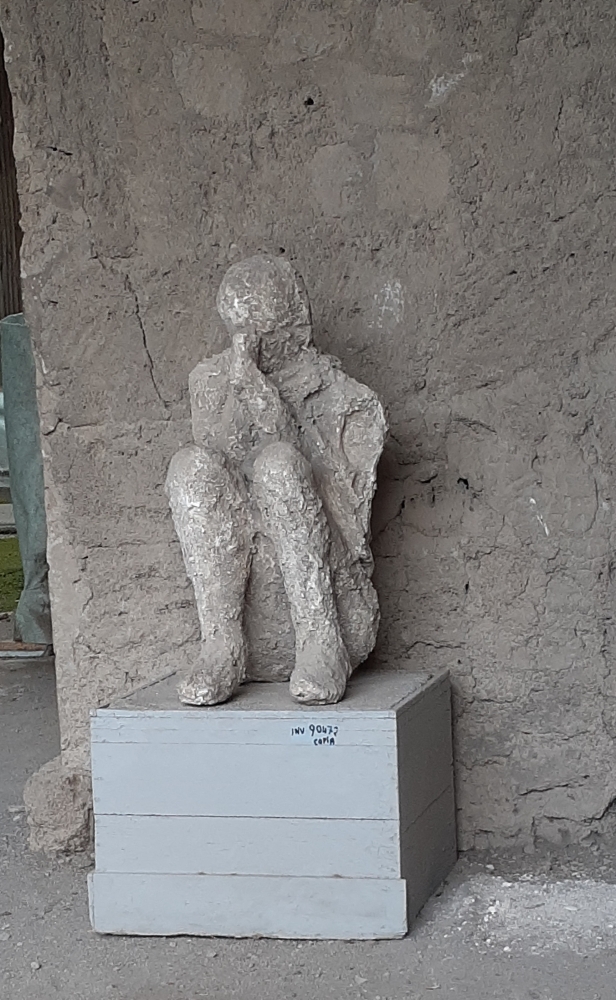 We booked tour tickets for the upcoming Sunday. We chose a Sunday because the hardware stores were closed, and none of the couriers worked on that day, so we were sure that we wouldn't receive any packages or be able to buy any items that would allow (compel?) us to work on boat projects. But we had saved a special boat project to do on that day: deploy the Boat Bombs!

I'll digress for a moment here, to extol the virtues of Boat Bombs. Also known as "Starbrite NOSGuard Boat Odor Eliminators," these handy little things are an easy and effective way to get rid of odors, mold, and mildew in an enclosed space. We first used these a few years ago, to purge SCOOTS of a stubborn odor, and we've kept some on board ever since. The six packs we had in Italy, I'd bought on Amazon while I'd been in the States, and carried back in my luggage, destined to dispel the odor that had come with the catamaran. The active ingredient is chlorine dioxide gas, which isn't formed until the pack's dry powder is mixed with water, so it's safe to transport (unless your plane crashes into the ocean and your luggage gets wet, in which case you've probably got bigger problems). There's also no solid residue when it's done. You and your pets will need to vacate the premises while the Bomb is in use, but when it's done you just open all the windows, the gas escapes, and your formerly-stinky space now smells fresh. OK, commercial over. 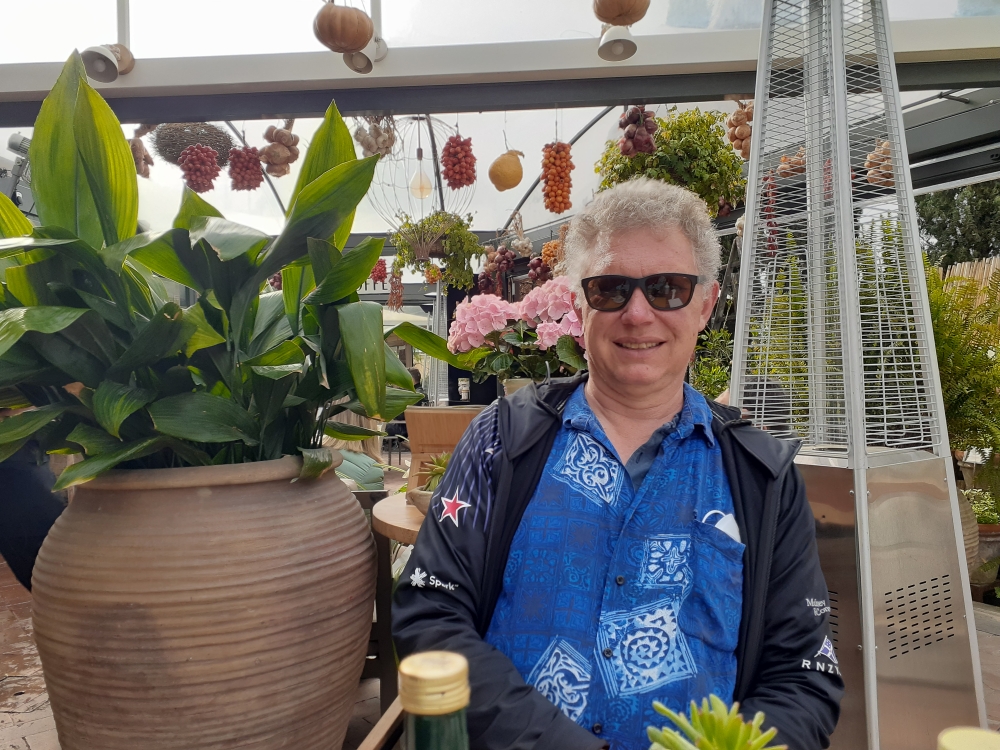 Eric enjoying the cafe at Pompei

At the main gate, we met up with our tour guide, Diego, an enthusiastic and knowledgeable archeologist, who brought both cities to life for our group.

To actually be in the ancient city - to see the things I'd read about, to walk the streets where people had walked, to enter the houses where people had lived, thousands of years earlier - was amazing! One of the artifacts I'd seen pictures of, when I was in high school, was a counter with holes of different sizes, used for measuring grain and other items that were being sold. And here it was! 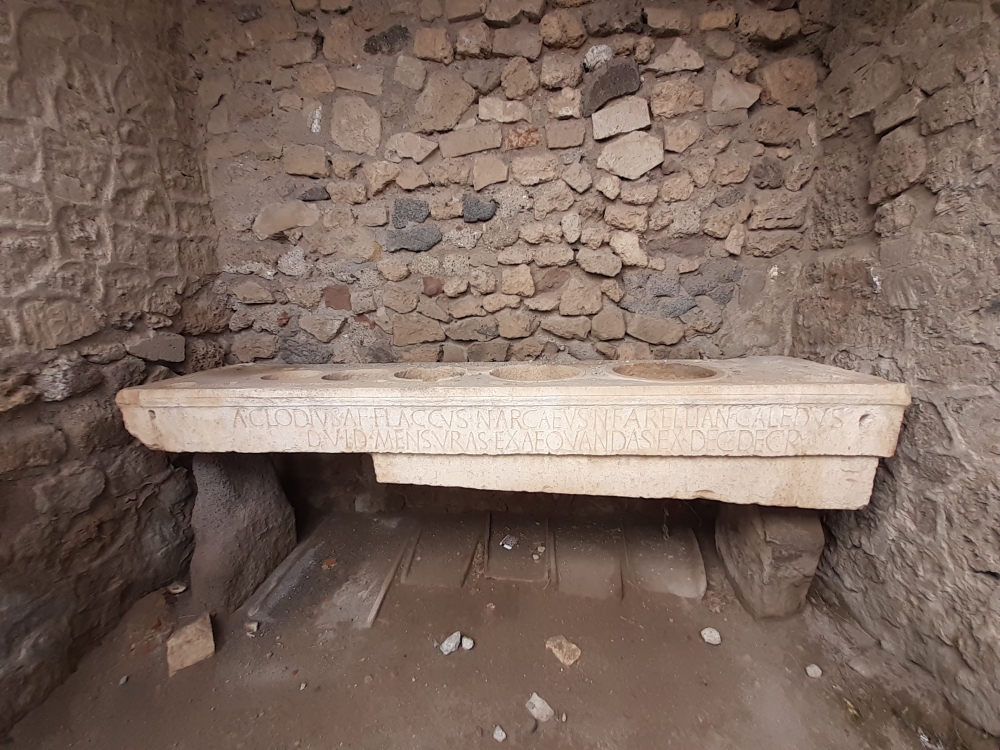 While it was thriving, Pompei was a big city, sprawling about 170 acres, and housing a population of 15,000 people, including lots of slaves. Eric and I were blown away by how old everything was. And yet, some of the ancient shops had used sliding doors, just like modern ones, their tracks still visible in the ruins.

In the afternoon, our small tour group boarded a train for the short ride from Pompei to Ercolano. The Vesuviana, it's called, with colorful passenger cars and a festive accordian player performing for spare coins.

Ercolano is quite a bit smaller than Pompei, but better preserved, the result of its rapid inundation by pyroclastic flows from Mount Vesuvius, which covered the town in 20 meters of what is now rock, sealing it off from the air. In Ercolano, we saw intact (but carbonized) wooden beams in many of the houses, and even some carbonized furniture. Many of the frescoes retained their natural bright colors. Though the sea is now several kilometers distant, Ercolano was a seaport when the eruption occurred, with dozens of boat houses lining the shore. Many people sought refuge - and perished - in these boat houses; excavations are continuing to recover the remains of these people and their artifacts.

On another Sunday, we caught the train into town and then took a taxi to an old castle, Castello di Arechi, on top of a tall hill overlooking Salerno. The taxi dropped us off in the parking lot, at the bottom of some stairs leading up though a wooded glade to the castle above. When we arrived at the castle, we found that it was closed. Every indication, including the castle's website, had been that it was open. But, as often happens in Italy, it wasn't. No explanation. The doors were closed and locked. 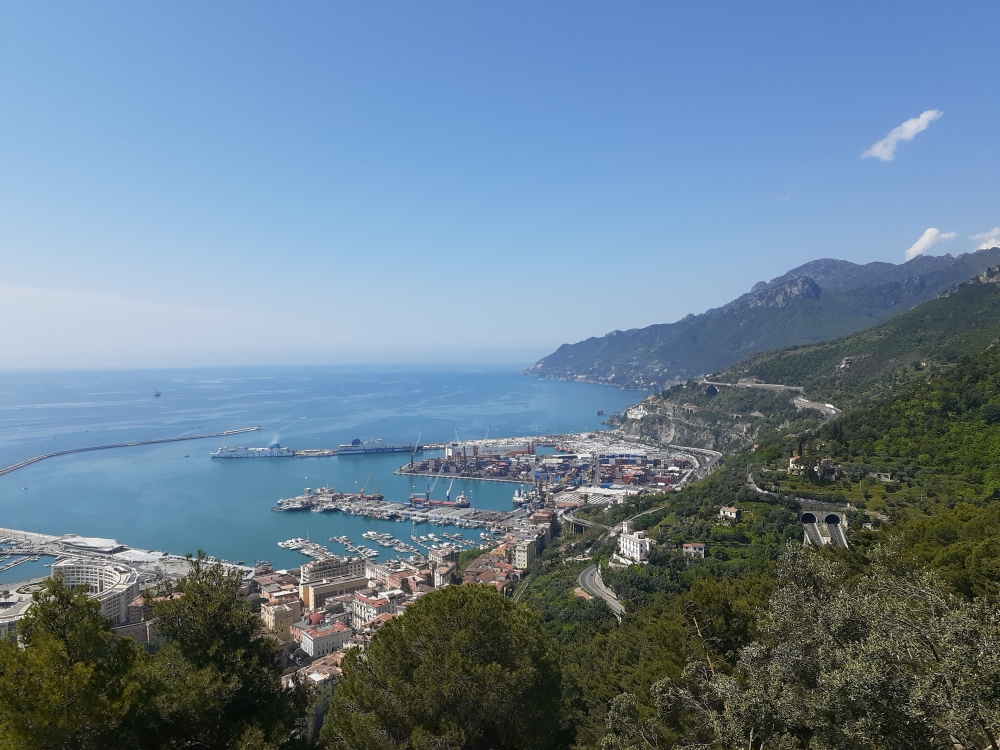 The view of Salerno from the castello

So we wandered around the outside of the castle, along with several other groups of people who'd also been duped. We amused each other with quotes from Monty Python's Holy Grail, and enjoyed looking at the slots in the thick wall where defenders had fired arrows or poured boiling oil onto marauding armies; interesting, in a barbaric, medieval sort of way. And then we considered our options for getting home. 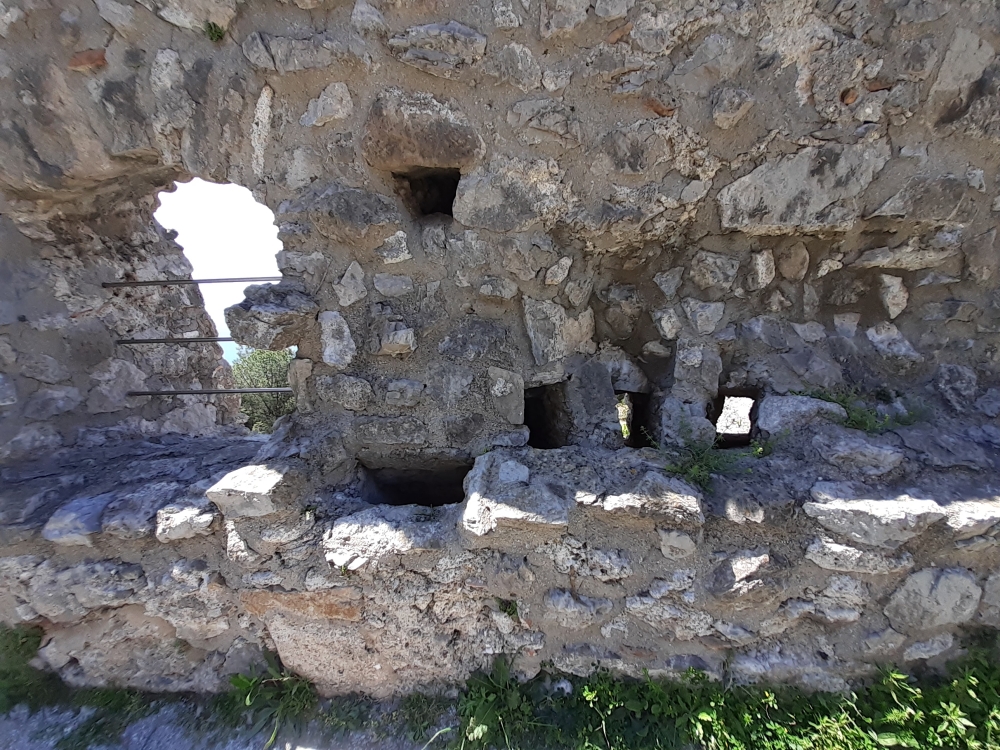 "Your mother was a hamster, and your father smelt of elderberries!"

We decided that since it was a nice day, we'd walk back down to Salerno (about 3 km). We arrived at what seemed to be a "back entrance" to the city, in the Centro Storico (old part of town) where we wandered through old (but well-kept) warrens of cobbled alleys and walkways, many with brightly-colored flowers spilling over the tops of the walls, enlivening the paths that we walked. 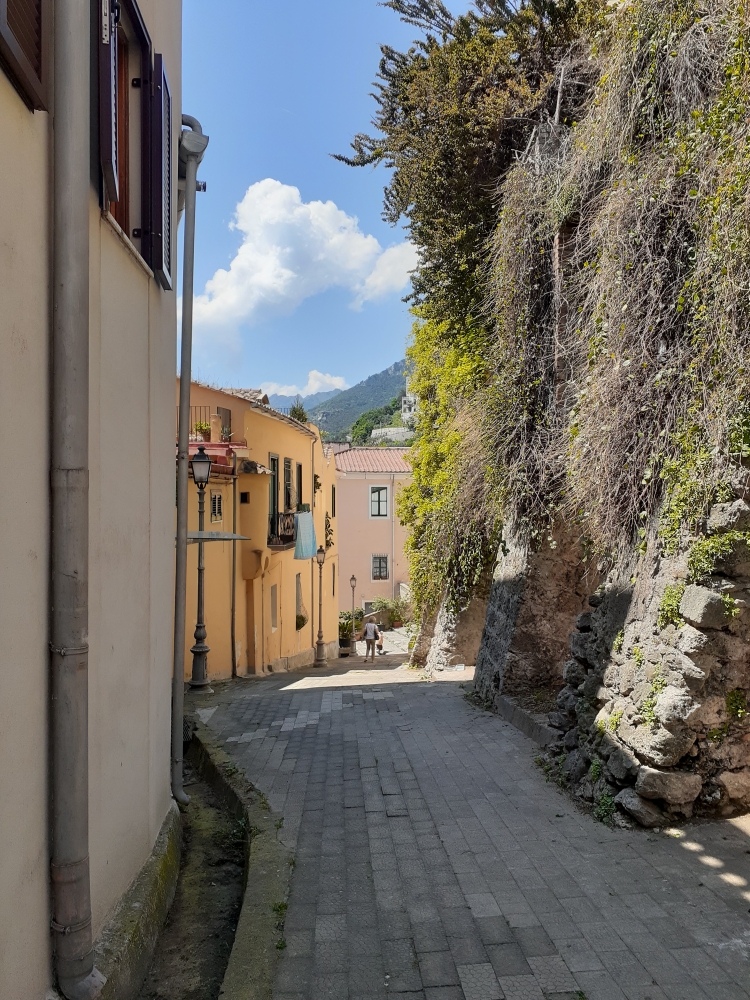 The back way into Salerno

We descended stone staircases whose surfaces were worn by centuries of footfalls. At one point, we turned a corner, and saw a small sign which read "Ascensore Pubblico": public elevator. Really? Yes, there, in the midst of all of the old stone walkways, was a rickety-looking bridge extending to a small tower which, presumably, contained an elevator. Eric walked right over to it, and pushed the button, eager to give it a try. I, on the other hand, will admit that I was a bit hesitant to cross the rickety bridge to the equally-rickety-looking elevator, especially since there was a big sign on the wall that said something about "mantenimento," which sounded an awful lot like "maintenance" to me. Was the elevator operational? Was it having maintenance work done on it? Eric told me to stop worrying, it was fine, an opinion which, coming from the engineer between us, carried a lot of weight with me.

Anyway, the doors opened and Eric stepped in. 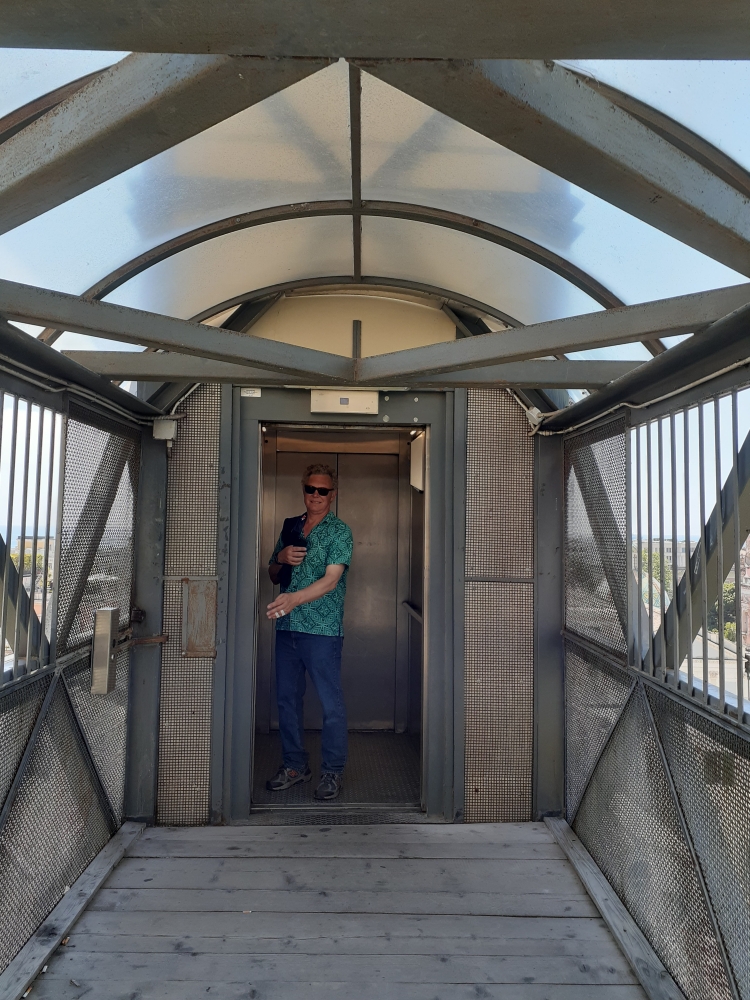 Eric on the ascensore

I walked across the bridge, and joined him in the elevator. Which delivered us, slowly and uneventfully, to a lower street. We continued on our way down the hill to the modern part of Salerno, where we had lunch at the sushi restaurant that Eric had eaten a few weeks earlier. After lunch, we strolled along the waterfront and ate ice cream at the beach. Rather than call a taxi, we walked to the bus stop, took a bus to the business district near the marina, bought some groceries, and carried them back to the boat.

Our belongings finally arrived in the middle of May! After we helped the two Italian moving guys get all 51 boxes onto our boat (except for the big wooden crate that Merv and Jeannie had given us, which was too big and heavy to carry across the passarelle, and remained on the dock), we started the herculean task of unpacking and finding places for all of our stuff. It was so nice, to be reunited with our belongings again! 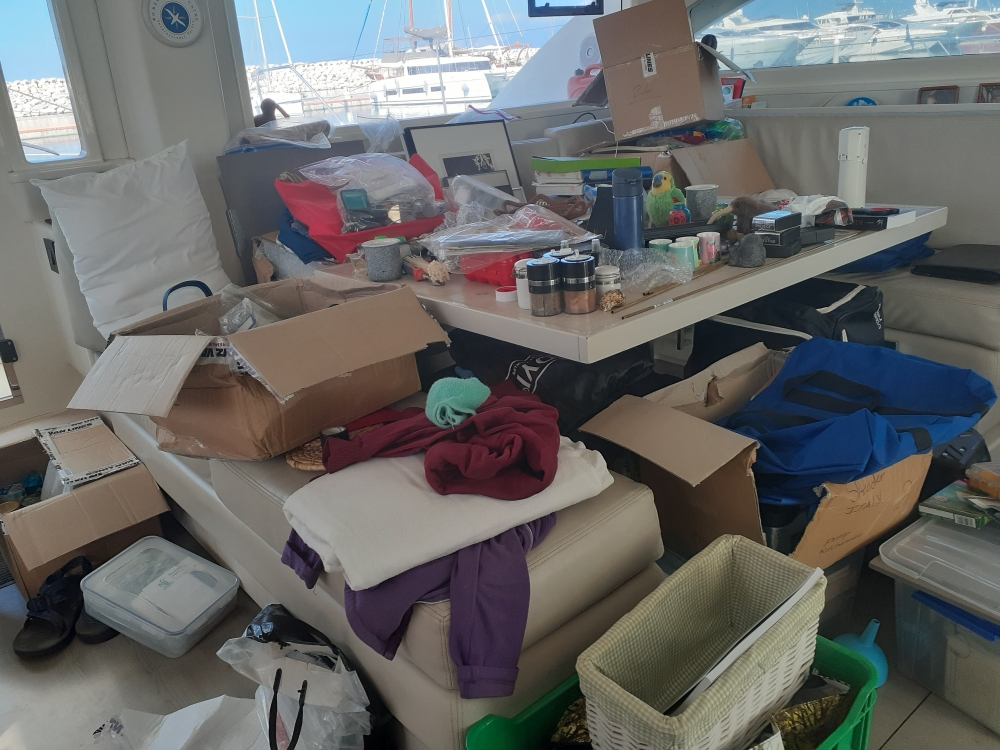 Some of our unpacked belongings

Some of them had been in storage for over a year, and it was like welcoming old friends into our new home. Two boxes didn't arrive - one was a box that had our dishes, most of our knives, and all of our tall glasses, and the other was the antenna that Eric had built to receive data directly from NOAA satellites. It was a bit of a bummer, but there was nothing that couldn't be replaced, and we soon had a payment from the insurance company, to cover the cost of doing just that.

Our good friends, Annie and Liam from Gone With The Wind, had packed a wrapped gift along with our belongings, that we weren't allowed to open until we were on our new boat. When we did that, we were thrilled to find all sorts of Kiwiana to help remind us of our time in New Zealand. As if we would ever forget. Thank you, Annie and Liam! 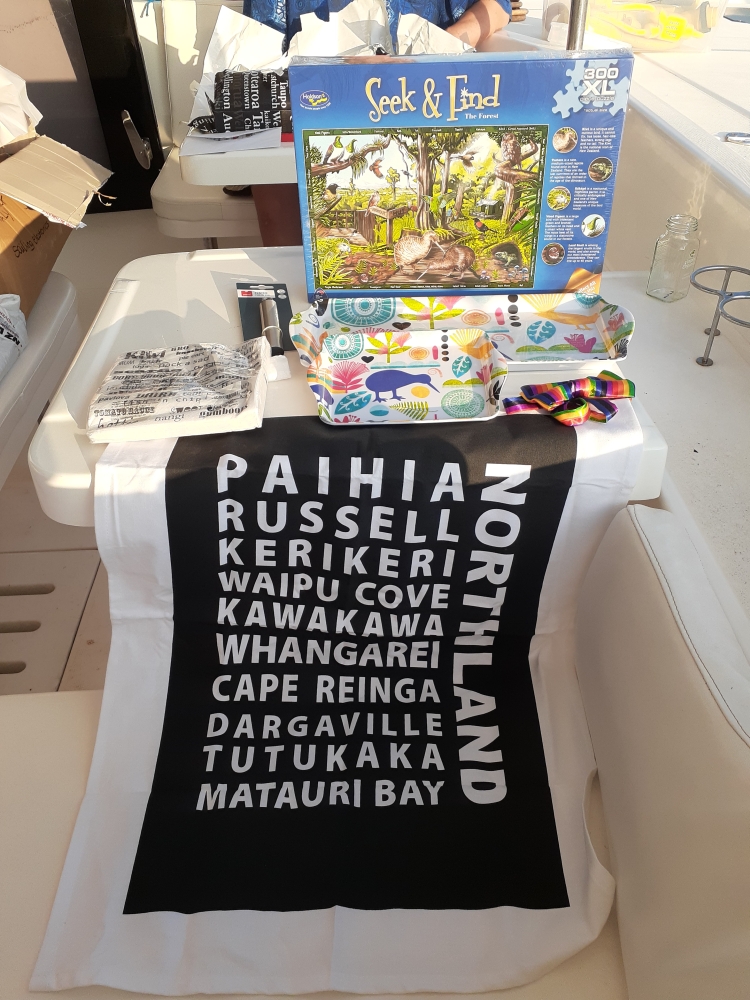 It took us all of April and most of May, to get the boat ready to go. But even then, we couldn't leave: the Italian deletion paperwork hadn't arrived, which meant we couldn't file our registration with the USCG, so we had no documentation showing that the boat was ours.

But we had to leave: Rania had been able to get us the extra month in the marina, so we could stay through May, but the marina was fully booked beginning June 1, so we had to leave by then.

As May drew to a close, we were really beginning to feel the squeeze of circumstances... 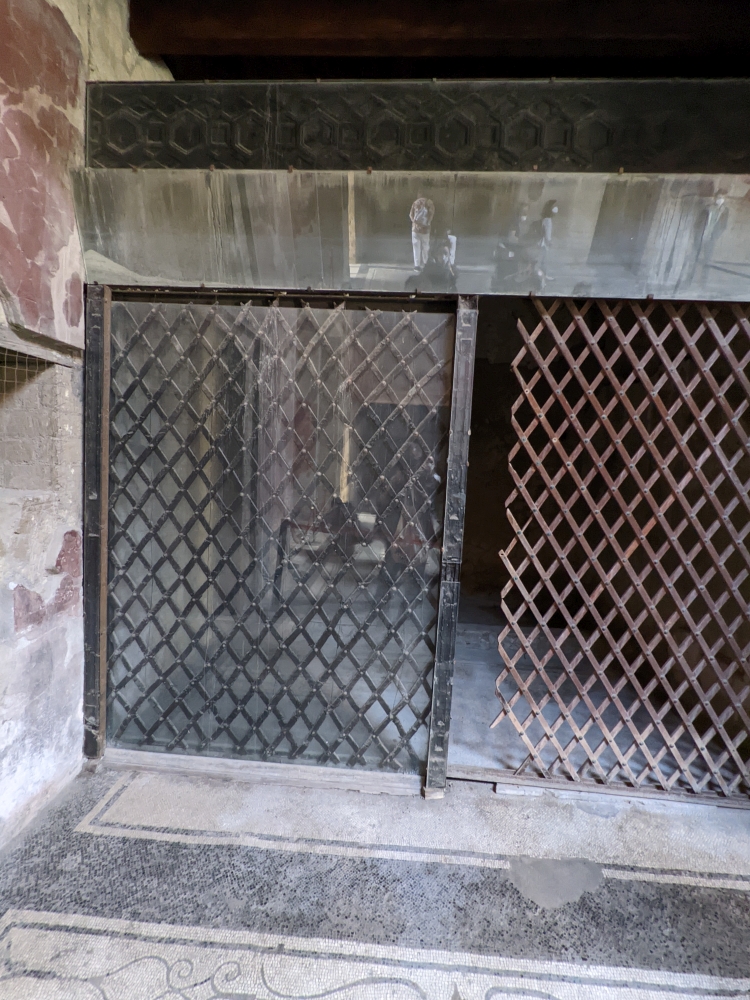 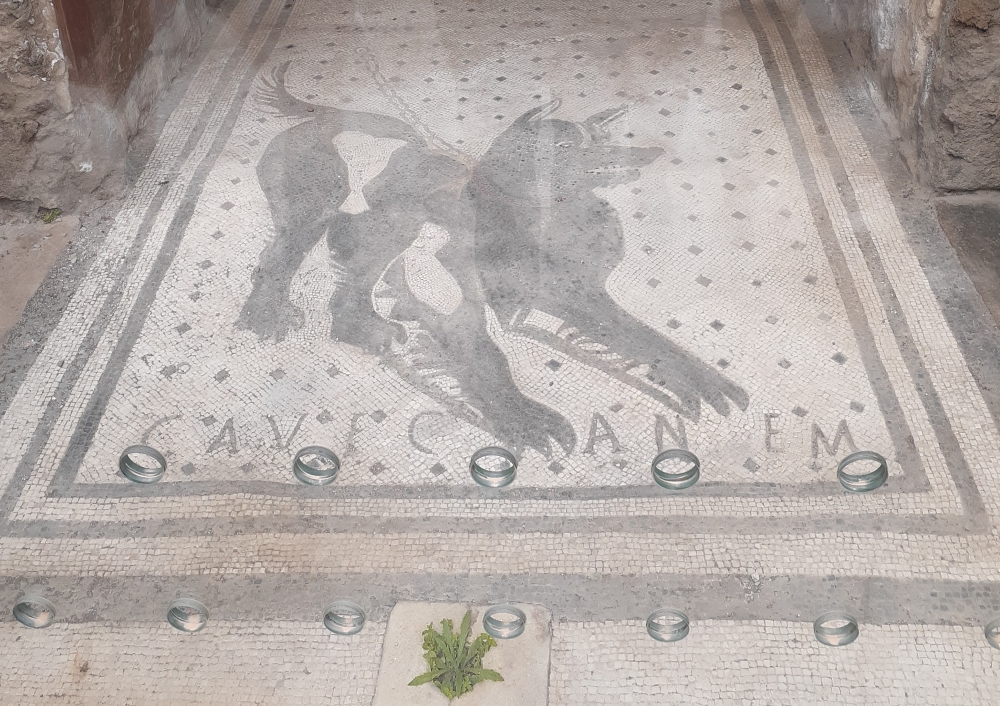 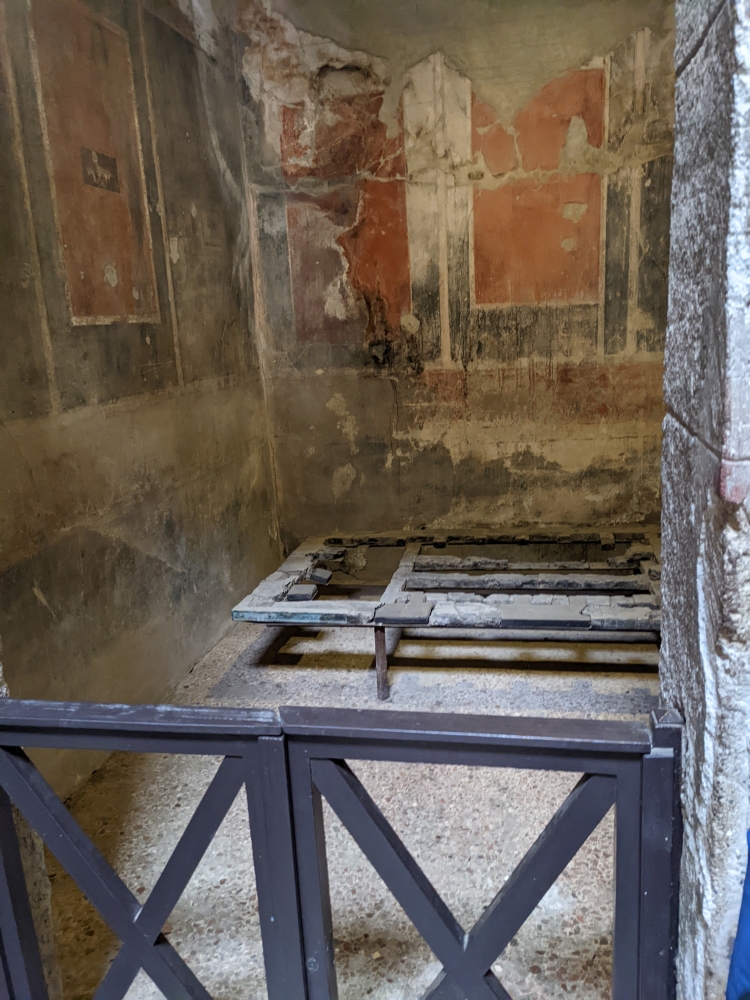 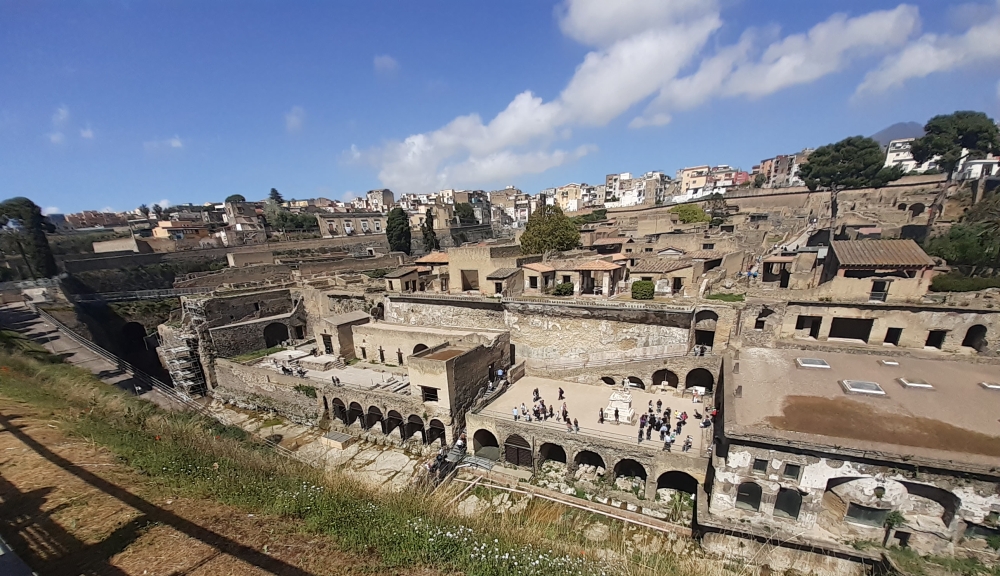 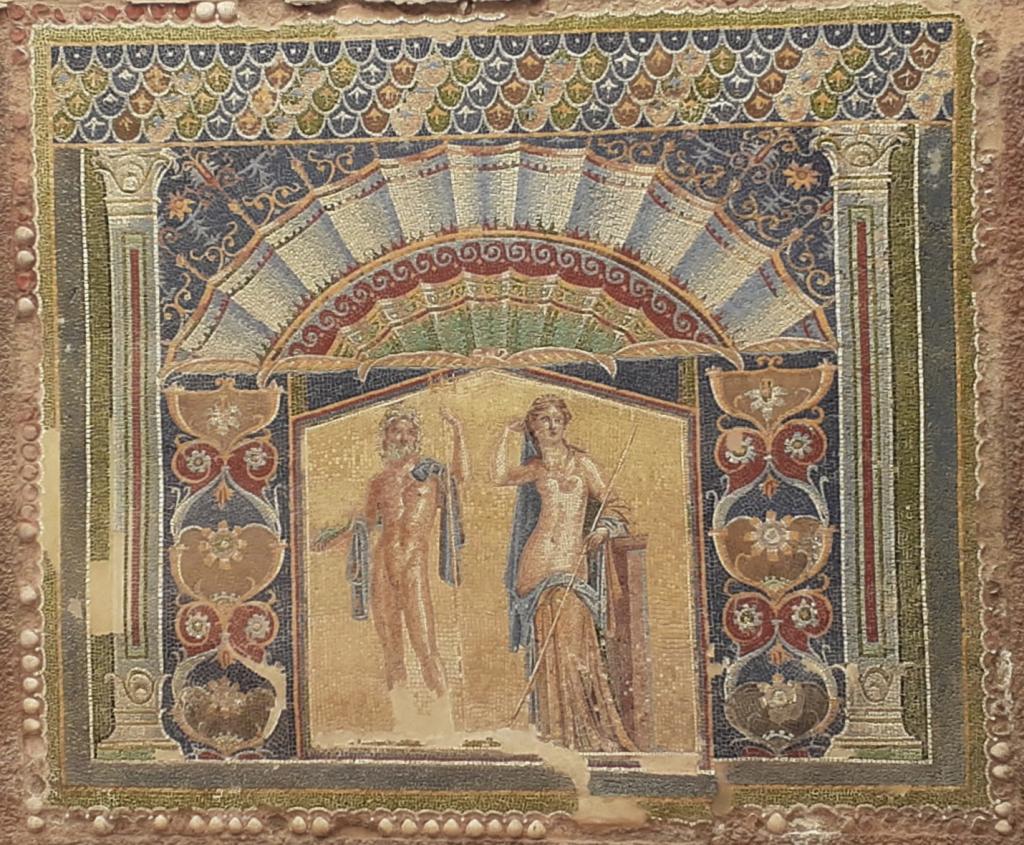 Streetlights haven't been invented yet? No problem. Just embed white shells in the street. From the baths in Pompei