The day after we received the US boat registration papers, we released Awildian from the bonds of Marina d'Arechi. After a brief and expensive stop at the marina's fuel dock (diesel being 2 euros per liter, of which we needed many, to top up Awildian's fuel tanks), we waved goodbye to Salerno, headed out the breakwater, turned left, and started south to begin our new adventures. 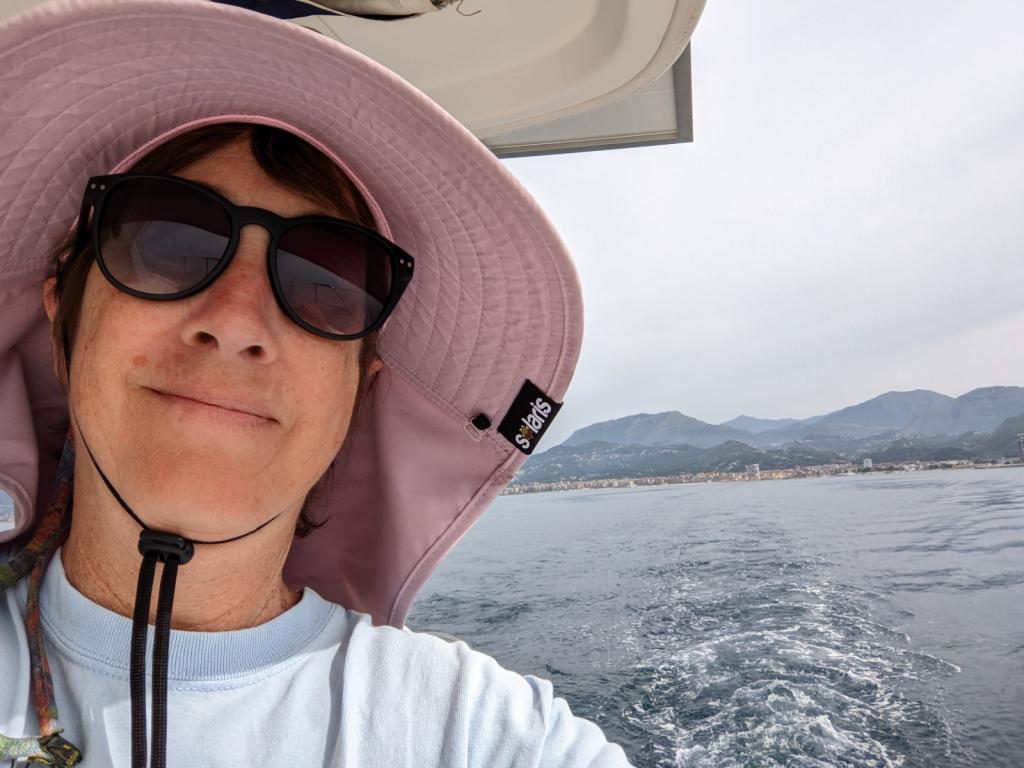 I can't fully express how great it felt to Eric and me, to be going somewhere, on our own boat again.

Sadly, we couldn't linger on Italy's coast. For immigration reasons, we needed to leave Italy as soon as possible, and head to Croatia. Not wanting to do a multi-day coastal passage from Salerno, we opted to stop every evening.

Though the Italian Waters Pilot, the pre-eminent cruising guide for the area, gave extensive descriptions of marinas large and small, it has no information about anchorages. And we weren't interested in staying at marinas; we wanted to use our big new anchor. To find suitable anchorages, we relied on a brilliant app called Navily. Navily uses a live, searchable map, that shows anchorages, marinas, and other sites of interest to the yachtie, with lots of useful details submitted by yachties who'd actually stayed there. Stuff like how good the holding is, what depths to anchor in, what the bottom is made of (sand, mud, weeds, rocks), whether a swell comes in, which wind directions it's sheltered from, and more. Using the premium version, we could even access these places offline, which would be useful when we were out of cell phone range. It was (and still is) an indispensable tool.

Using Navily, we were able to find suitable anchorages all the way around Italy, each about a day's travel apart. Speaking of travel, I should tell you that we had to motor the whole way to Croatia - more than 600 miles - because there was either no wind or it was on Awildian's nose.

Here are some highlights from the first part of our trip.

Day 1: Marina d'Arechi, Salerno to Baia del Buon Dormire - 49 miles. This was an exciting day for us. It felt so great, to be out on the water again, cruising! Especially after all the months of angst and paperwork. The water was flat and the wind was nonexistent, so we just motored merrily along, getting our sea legs (such as you can, in such benign conditions). We dropped Awildian's anchor for the first time in a beautiful sandy bay named Baia del Buon Dormire ("Bay of the Good Sleep"). How could you not stay in an anchorage with this name? 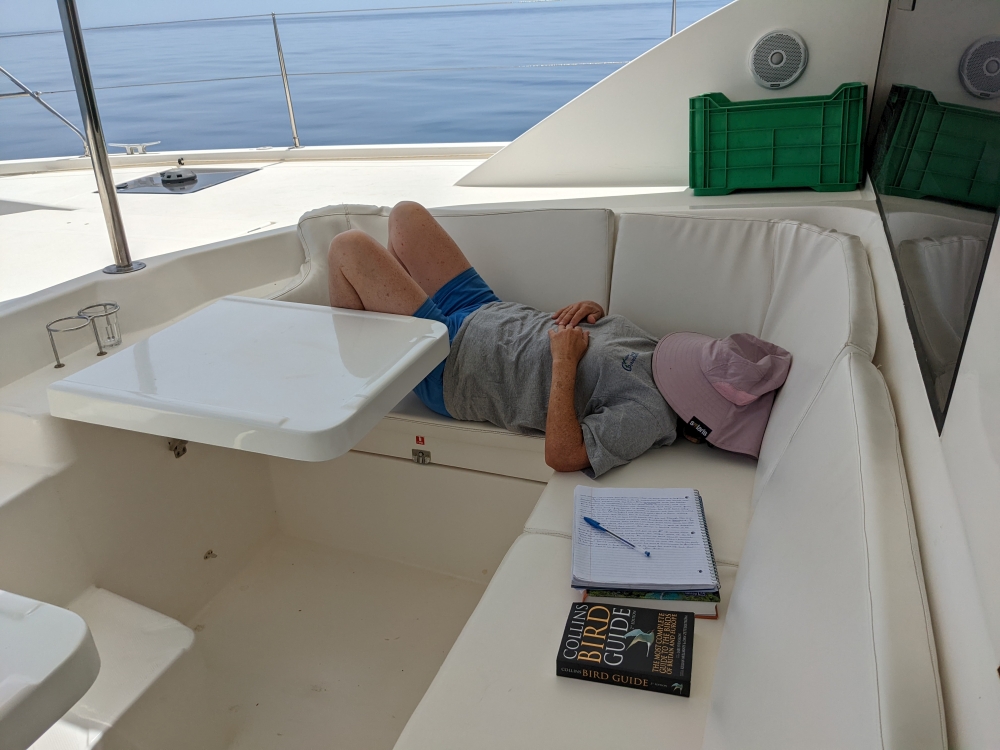 Day 2: Baia del Buon Dormire to Torre di San Giovanni Beach - 77 miles. The theme of today was FISHERMEN. We had to watch closely all day, for the floats and flags of fish traps and nets, and steer around them. There were also a lot of big fishing boats around. With spools of fishing net on their sterns, they'd cross our path in one direction, then go back again, then head off in another direction, before eventually gathering with others of their kind, jettisoning their small boats, spreading their nets wide on the water, and driving around in circles. That's how it looked to us, anyway. We just did our best to avoid them.

Aside from watching fishermen, we enjoyed seeing lots of old crumbling castles and towers, the sorts of things you don't see in the US.

We anchored this evening off the beach at Torre di San Giovanni. It wasn't particularly scenic, but it was in the right spot for us. Floating along in the calm anchorage with Awildian were basketball-sized, purple-and-white jellyfish, which I'd initially thought they were submerged fishing floats. 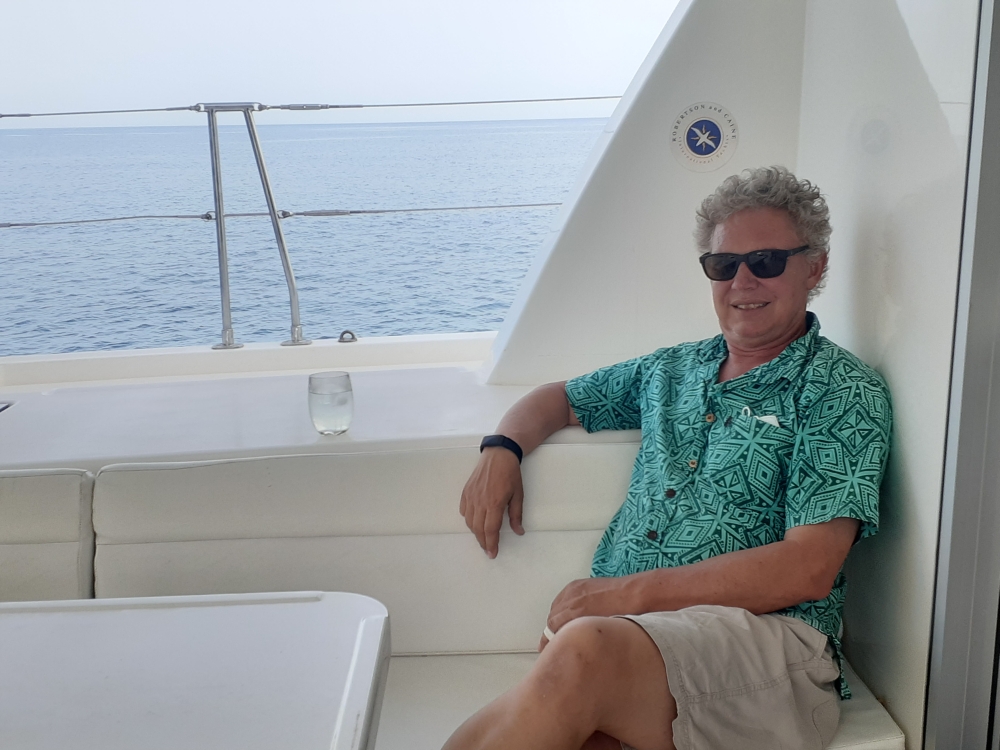 Day 3: Torre di San Giovanni Beach to Scilla - 52 miles. Today we learned about SWORDFISH BOATS. By watching them, and by trying to stay out of their way. These are one of the strangest contraptions we'd ever seen. The first time I saw one coming at me, with its tall mast and long boom, and web of guy wires holding it all together, I thought, "What the hell is that?!" I've included a photo of one, because my description won't do it justice. 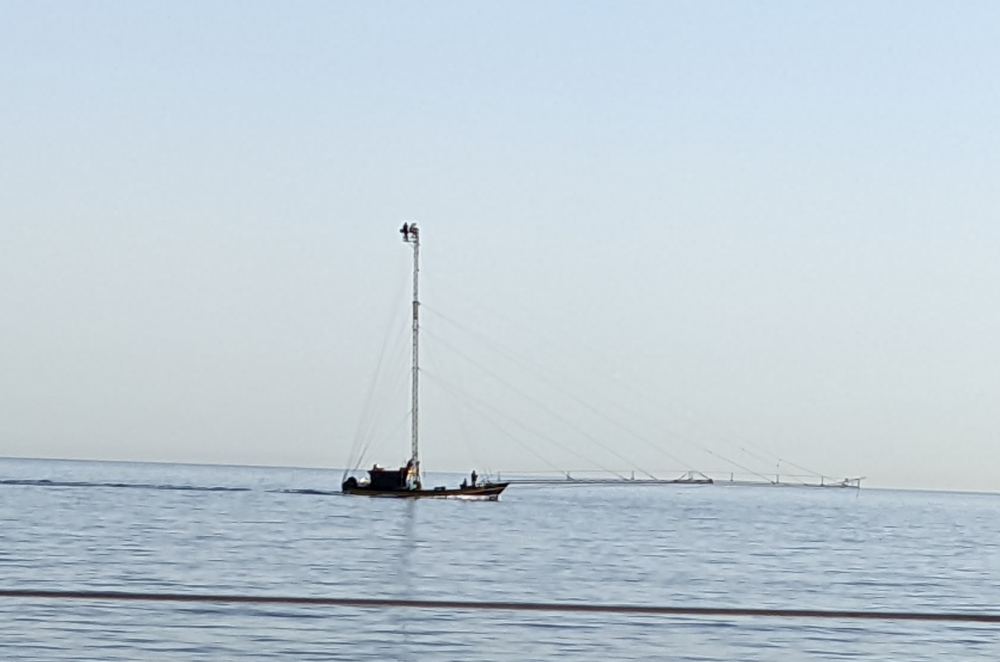 Here's how they work: The boat is maybe 40 feet long. The captain stands in a crows nest 30 meters (about 100 feet) above the water, from which he looks for swordfish and controls the boat. How does he see a swordfish? Well, it turns out that swordfish will sometimes bask near the surface. If the captain sees a swordfish, he steers toward it and alerts the harpooner. This guy takes his hand-held harpoon and walks to the end of a 45 meter (almost 150 foot) catwalk that extends out from the bow, about 6 feet above the water. The boat creeps up on the unsuspecting fish, and if the fish is unlucky, the guy on the end of the boom will harpoon it.

I was excited about tonight's anchorage: Scilla. That would be Scilla as in Scylla and Charybdis, two of the monsters from the Odyssey. On our trip south from Salerno, I suddenly realized that many of the places and monsters in that epic were based on real places and things, some of which were in our current neighborhood! It made me want to read it again.

Besides having a classically cool name, we decided to stay at Scilla because it's an excellent staging point for transiting the Strait of Messina, which we planned to do the next day. 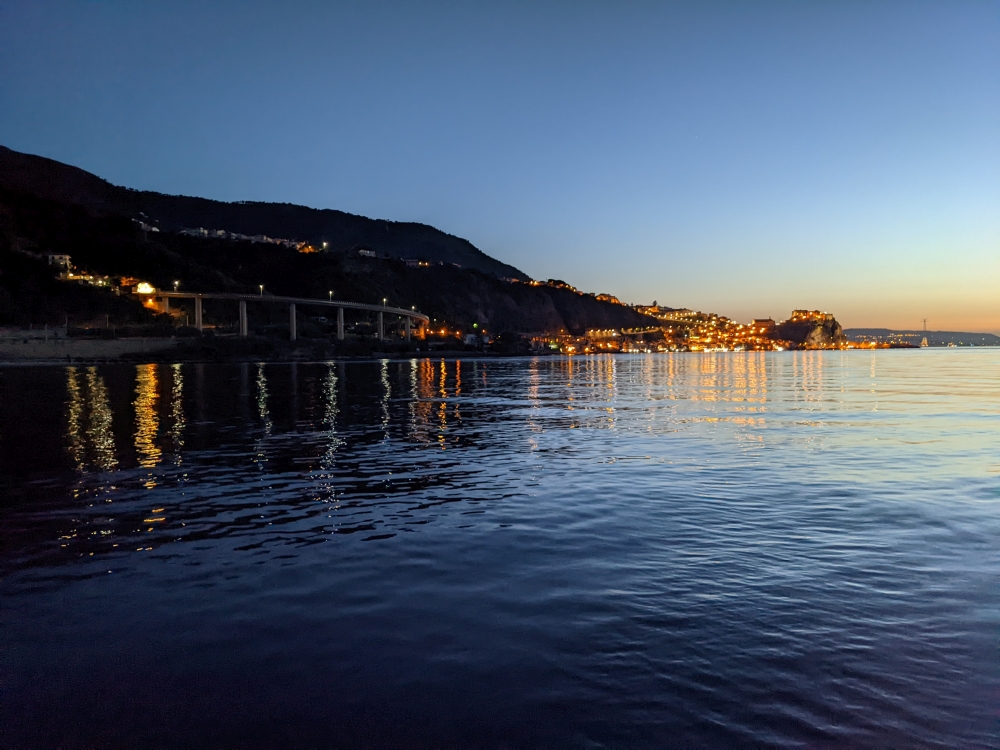 Day 4: Scilla to south of Rocella Ionica: Transiting the Strait of Messina - 74 miles. At twenty miles long and just shy of two miles wide at its narrowest point, prone to whirlpools and blustery wind, the Strait of Messina is worthy of respect. A transit is best made through this shortcut between Sicily and mainland Italy when the current is near slack, and the wind isn't blasting. You can track the Strait's current at the website Correntidellostretto.it, which has schedules of its peak and slack times, for any day you want. Based on that, we were ready to transit the Strait this morning - we and about a hundred other boats, everything from cruise ships to tankers to ferries to swordfish boats to sailboats like ours. All of us lined up in a miles-long parade at the northern entrance, and checked in the with traffic authority - VTS, vessel traffic services - who kept track of where everybody was.

Our transit was interesting. Near the northernmost point of the Strait, is a place called Charybdis, where a giant whirlpool has been known to set up, and yes, it's also the name of Scylla's monster buddy from the Odyssey. So we passed between the Scylla and Charybdis, just as Odysseus had! When we passed it, during benign conditions, we crossed through a line of small whirlpools that it had spit out, dozens of spinning white vortices, stretching from shore to shore. I can't imagine what it's like in the wrong conditions!

Our trip through the Strait took a couple of hours, then we turned left and headed up the coast, around the toe of Italy. We had left the Tyrrhenian Sea behind and entered the Ionian.