Working and playing in Monopoli We had chosen to stop in the marina at Monopoli, rather than continuing on to some of Italy's other clearance ports farther north, because a strong north wind (maestrale, mistral, or maestro, depending on your location) was forecast to come roaring down the Adriatic Sea in a couple of days, lasting for two or three days, and because many of the anchorages on the Adriatic coast of Italy didn't offer much shelter from the wind and seas, being in a marina seemed like the best option. Also, as an Italian port of entry, Monopoli has all the officials necessary for clearing into or out of the country, clearing out of Italy being our goal. From Monopoli to Cavtat, the Croatian town where we planned to check into the country, was only 122 nm, an easy overnight trip.

One of three small marinas in Monopoli, ours was called Cantiere Nautico Carpentinox and consisted of one floating pontoon, and a busy boatyard. 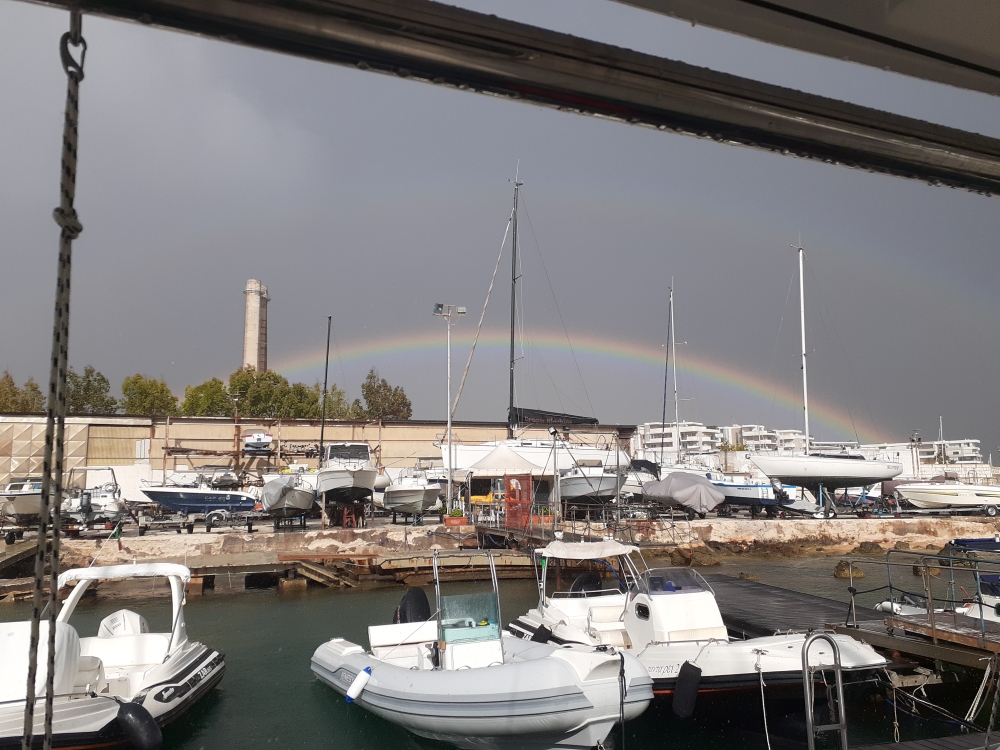 The two were connected by several platforms that moved somewhat independently of each other in the constantly surging currents of the harbor (think "moving fun house platforms"), creating an interesting symphony as their various metallic and wooden pieces ground together. These were anchored to the ground by a fat chain attached to one of the platforms and then tied around a large boulder near shore.

As marinas go, this one wasn't particularly "flash," but it had what we needed, the people were friendly, and it was in the right place for us. Plus there were lots of cats living there, too. 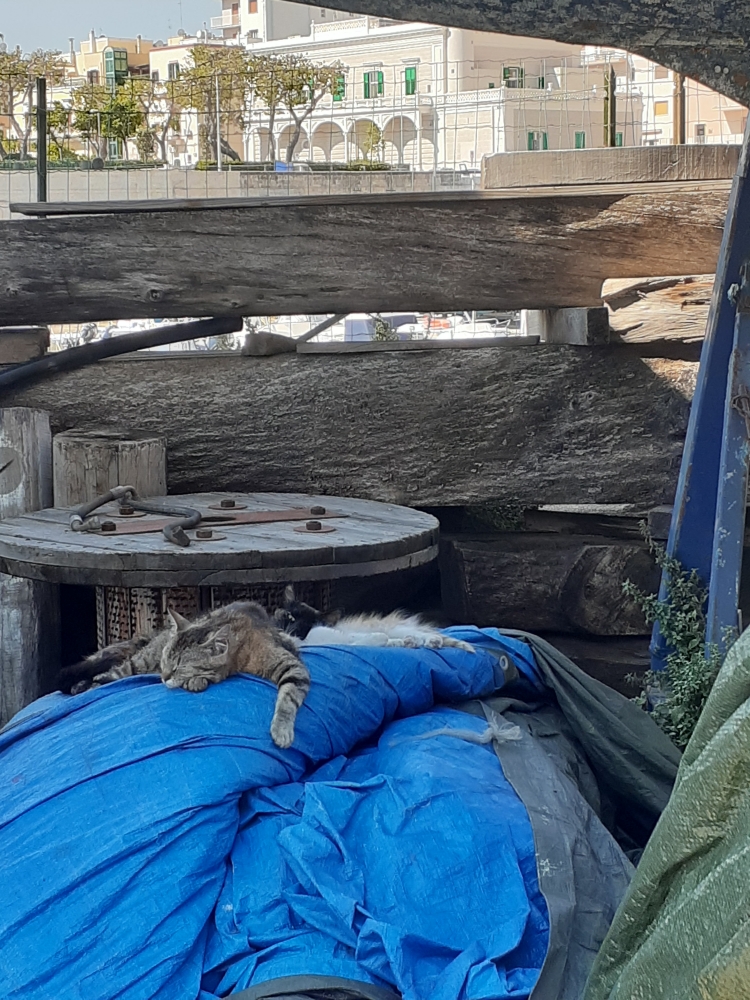 The morning after we'd arrived, Giuseppe, the owner of the marina and boatyard, and his son, Nico, met us at the picnic table under an awning near the pontoon, to discuss our berthing fees. Apparently, these things are negotiable to some extent. Nico spoke better English than his dad did, so he acted as translator. On my Navily app, I'd already seen an estimated cost of berthing at the marina, based on Awildian's measurements. I'd thought the cost was really high and was hoping that the actual cost would be lower.

Nico and his dad had a brief conversation in Italian, then Nico turned to us. When he told us the price his father had requested, our jaws dropped. It was more than twice the amount Navily had estimated, and I told Nico as much. He turned back to his dad, and they had a much longer, rapid-fire Italian discussion. When Nico turned back to us, he said that his dad had agreed to a lower berthing fee, but this was the lowest he would go. At 180 euro per night, it was much lower than the price Giuseppe had originally asked for, and closer to the Navily estimate. Welcome to marinas in the Med. Ka-ching!

While we were in Monopoli, we made the most of being in a town again. We visited the local marine supply store several times to look for items that we needed, we had one of our small European "CampingGaz" (yes, that's really what they call it here) canisters refilled, we went grocery shopping, and we ate lunch out a couple of times. Most places were within a couple of kilometers of the marina, so we could get there by walking. We got to know the area pretty well during our time there.

We did quite a few maintenance and repair jobs while we were in the marina. Eric bought the items for making a pulley system to hold the two jib sheets up off the roof, where they often tried to tie themselves to anything that's there, most notably solar panel wiring and connections, with the intention of ripping them off. Our friends on Gone With the Wind have a similar setup that works well for them. Eric went up the mast and deployed his gadget on one of the less-windy days. It looks like it will work great. 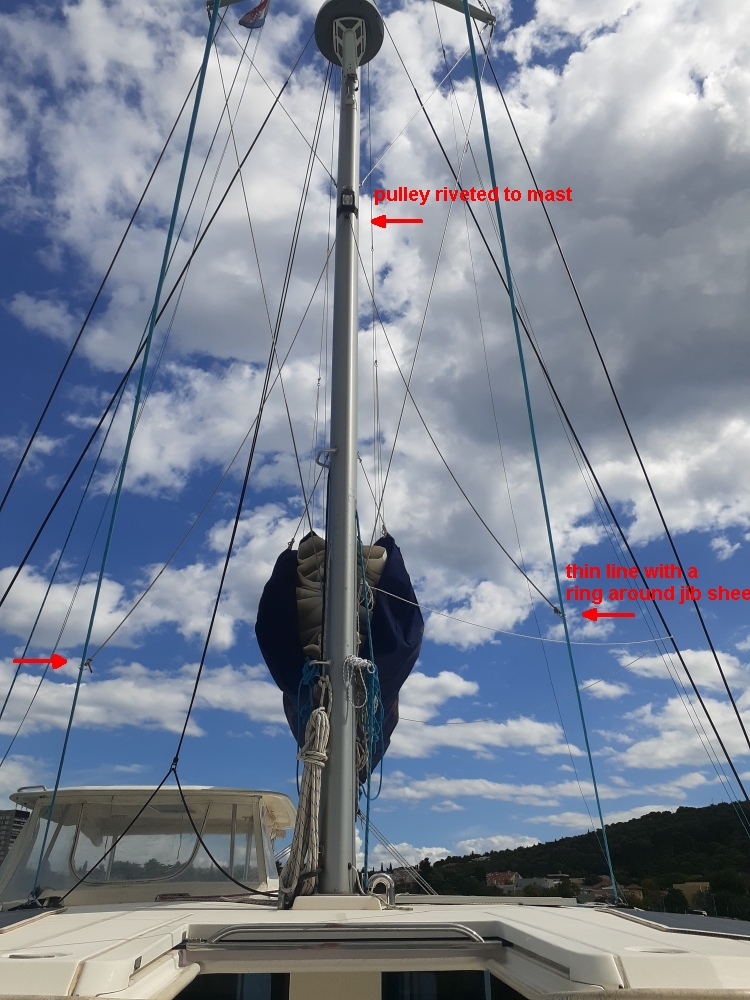 He also changed the oil and filters in both engines (whom we've named Thing 1 and Thing 2), and Giuseppe had given us a big carboy to store our used oil. We cleaned the watermaker with a cleaning solution, and then Eric installed new hoses with valves to direct the outlet water from the watermaker either out into the sea or into one of the water tanks.

We also went exploring. Just down the way from the marina was a 16th century castle, the Castello Carlo V. We checked its website for the hours that the castle was open, and went to have a look. Arriving in the middle of its open hours, we found the doors locked and a sign apologizing for the castle being closed as it was under renovation. We were now two for two with Italian castles...we had yet to see the inside of one. 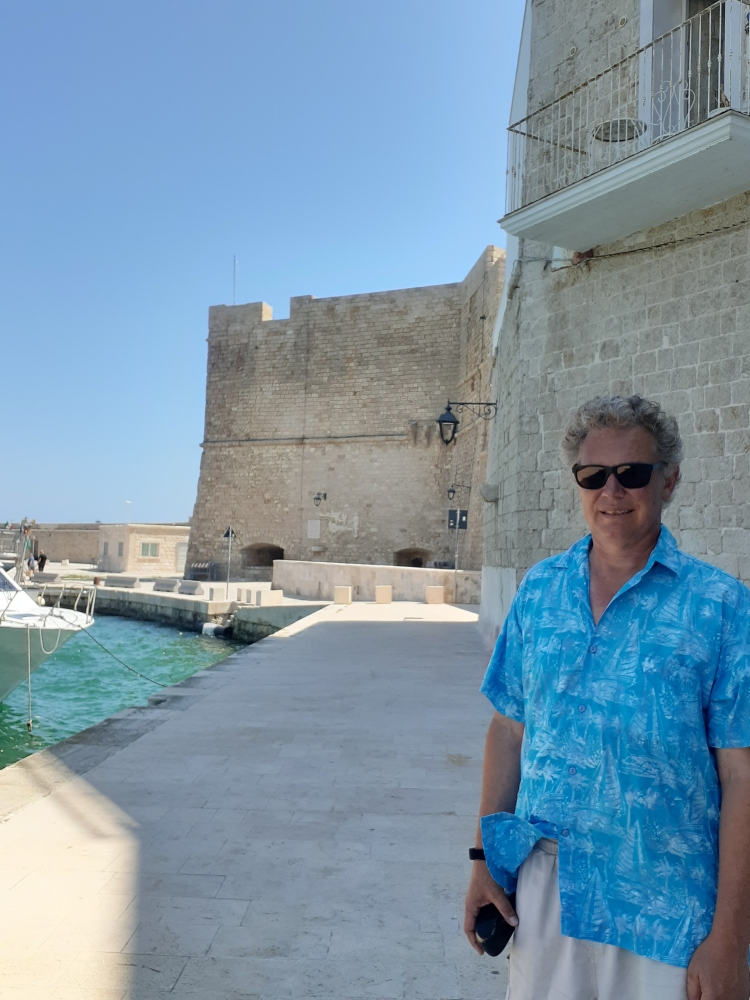 The outside of another Italian castle


We enjoyed walking through Monopoli's old town (centro storico), wandering along narrow, winding cobblestoned streets with their tall stone and stucco buildings on either side. 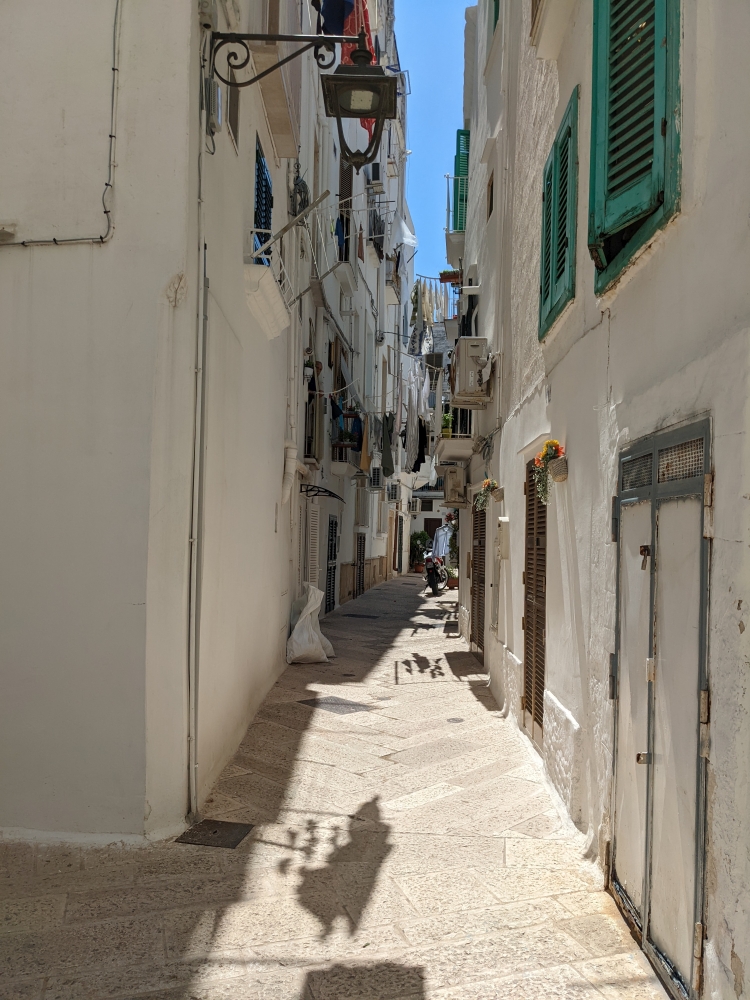 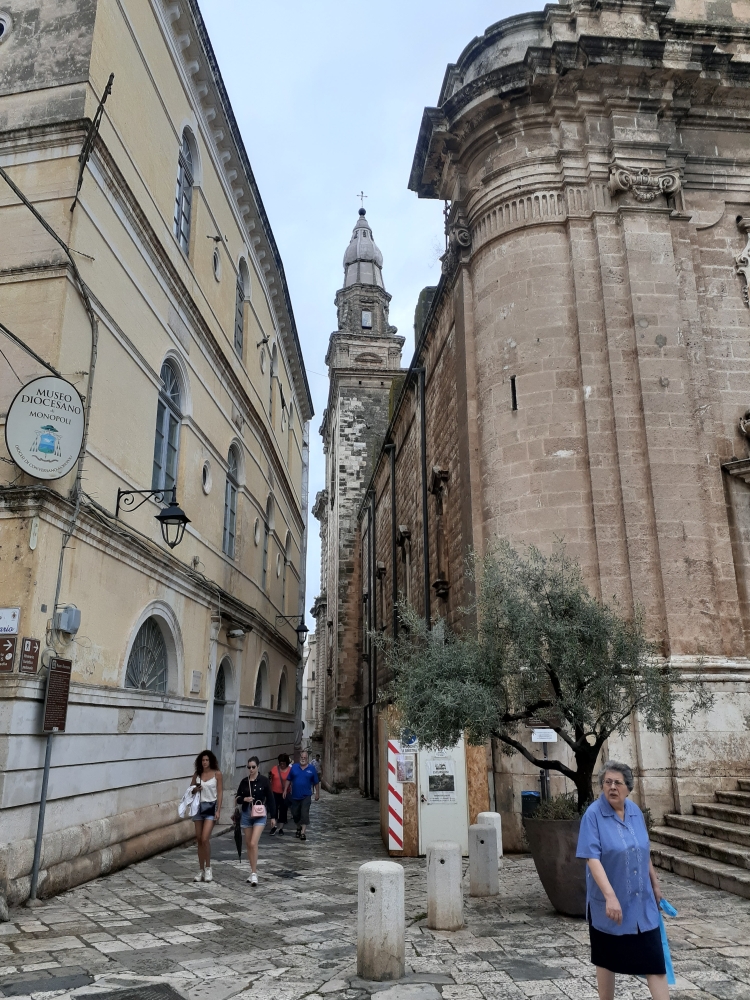 And how really old, sort of old, and new buildings were juxtaposed, with people living in all of them. 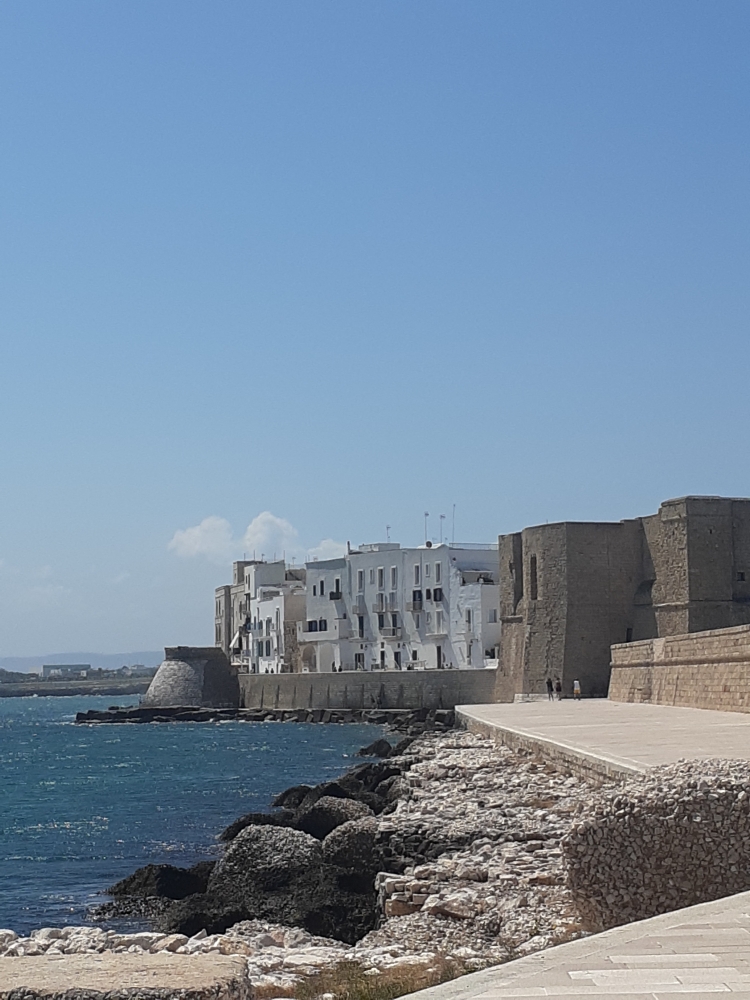 Many of the nooks and sculptures on the buildings made pleasant nesting sites and perches for pigeons. 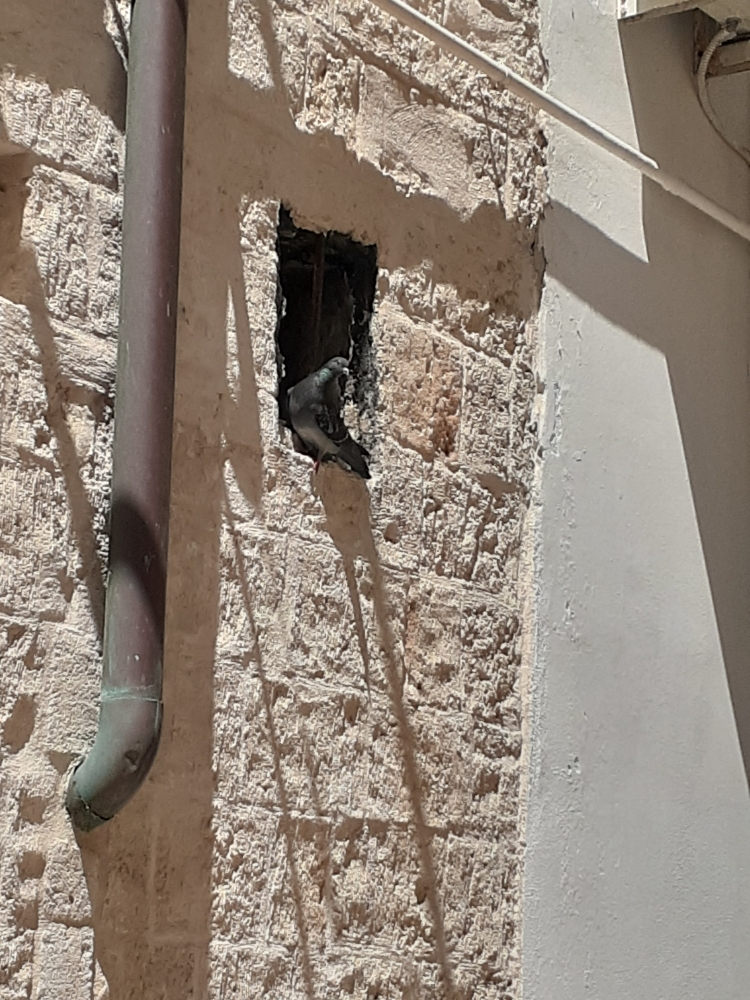 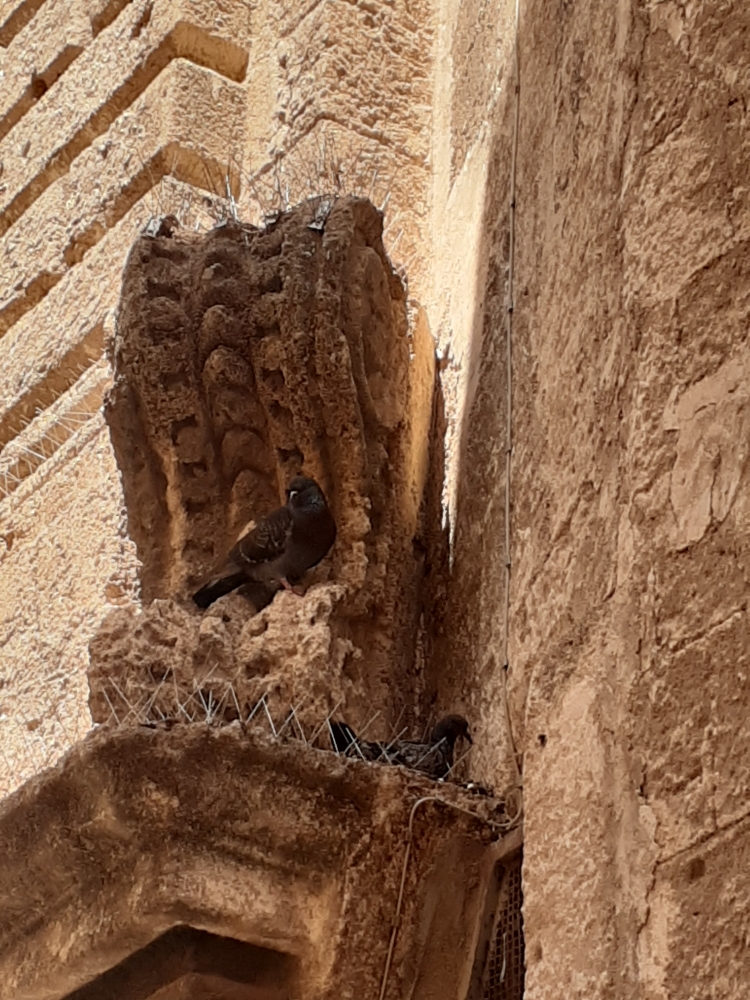 Tucked into a small section of the old port, we saw dozens of gozzi, the small bright blue traditional fishing boats still used by local fishermen. 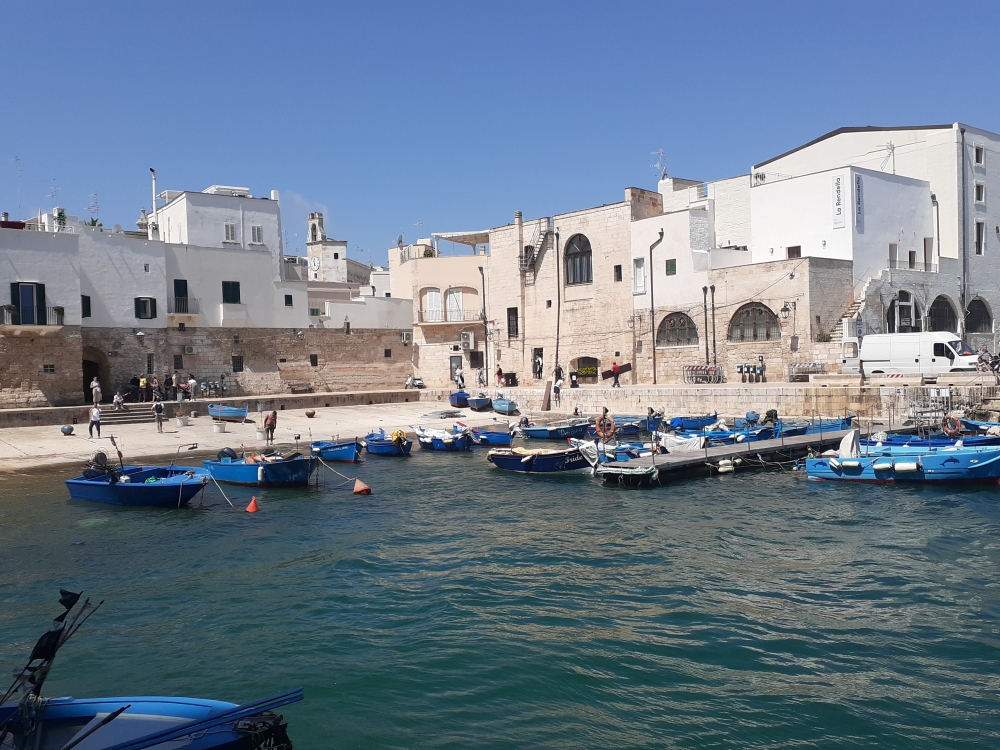 We visited the Cathedral of Santa Maria della Madia, a huge, ornate edifice that was built from 1740-1770 on the site of the original cathedral that was constructed in the 1100s, that was itself built on the site of even earlier religious gatherings.

The story goes that construction of the first cathedral had to stop because there weren't enough wood beams for the roof. Then a miracle happened: a raft constructed of strong wooden beams and carrying a painting of the Madonna with child appeared in the seaport. The beams were used to complete the cathedral roof, and the painting became a sacred icon in the church. 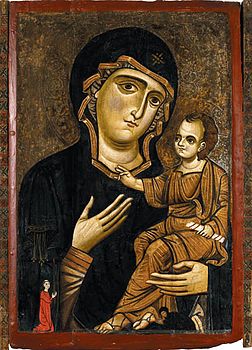 The sacred painting that arrived on the raft in the 12th Century. (not my photo)

The current church is an amazing piece of architecture, with a reliquary, a room to house some of the miraculous wooden beams, lots of sculptures and statues, and an extravagantly-decorated roof held up by dozens of thick marble pillars. Or, at least some of them are marble...on closer inspection we discovered that many of the pillars were actually plaster that had been painted to look like marble. Apparently, the cathedral hadn't received a second miracle that provided marble for the remaining pillars. 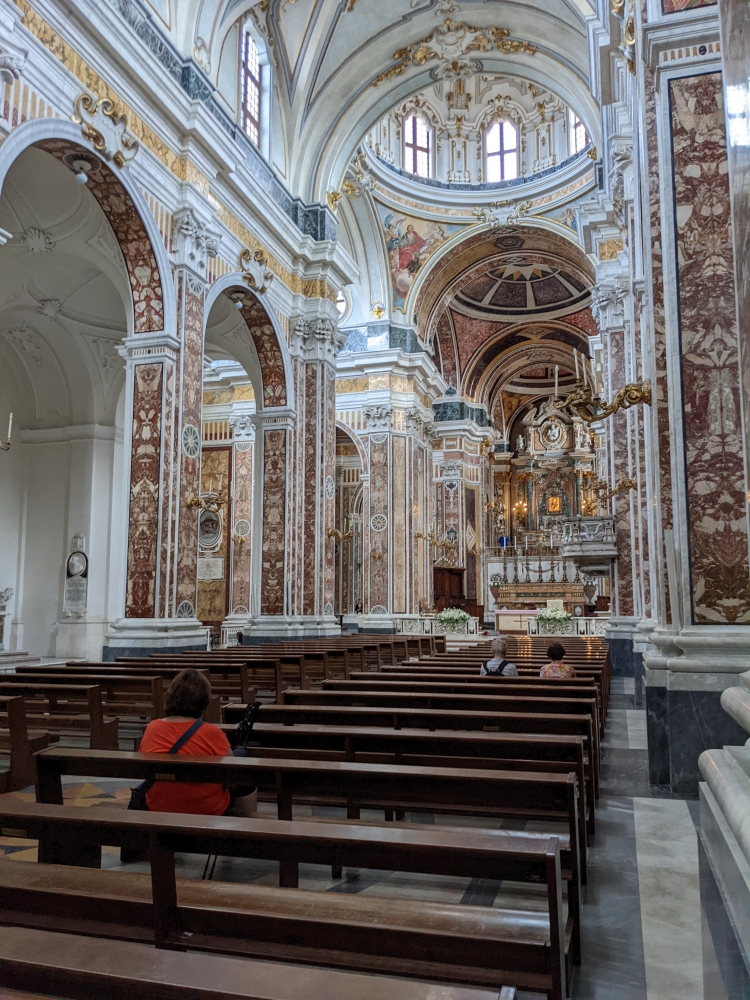 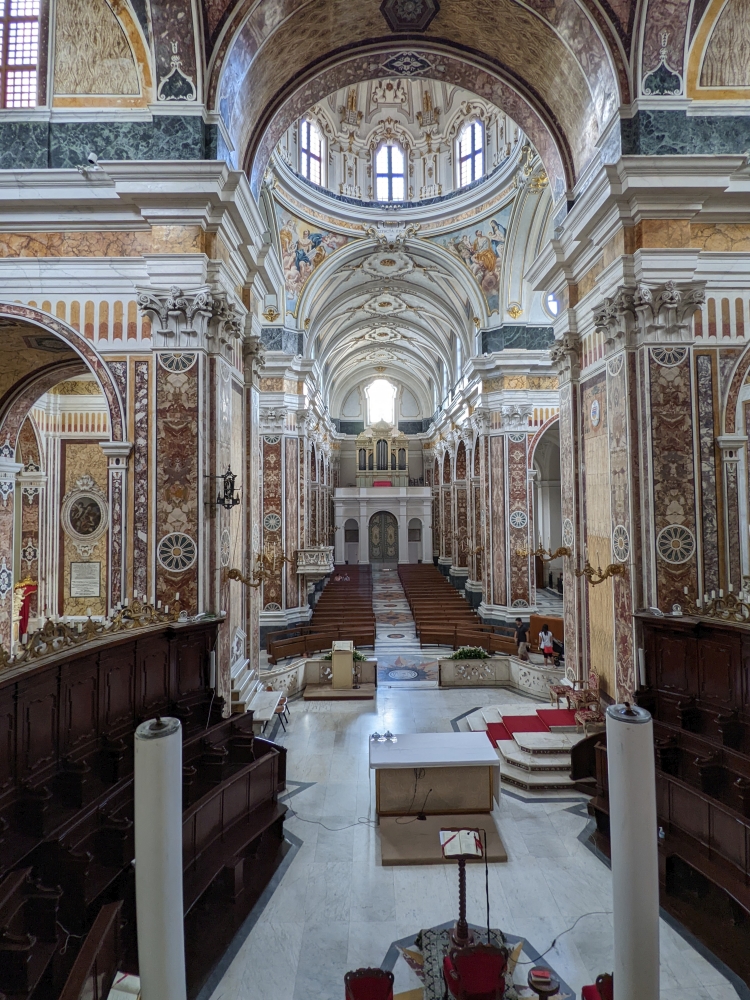 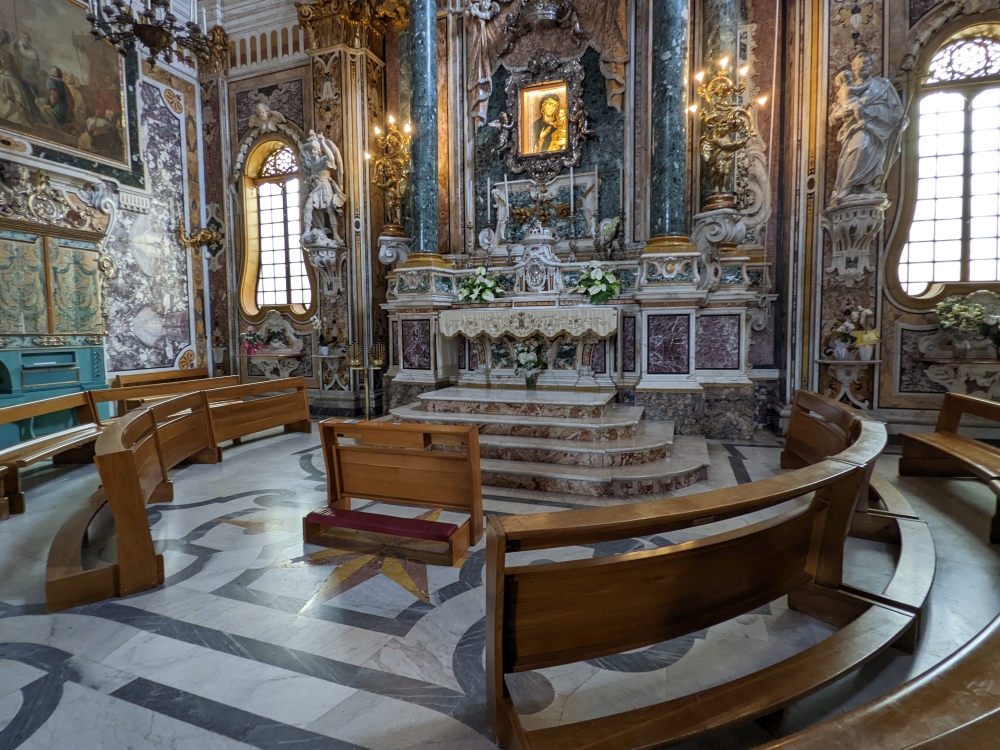 And, we spent a couple of days just relaxing on Awildian, doing things that we wanted to do, a rare treat for us, since moving aboard.

When the maestrale/mistral/maestro had blown itself out, we had seen all we wanted to see in Monopoli, done all the repairs and maintenance we wanted to do, filled the water tanks, and paid our marina bill, we untied the lines that were holding Awildian, and we finally - FINALLY - said goodbye to Italy.

We did not pass GO, we did not collect $200, we just headed east across the Adriatic Sea toward Croatia. 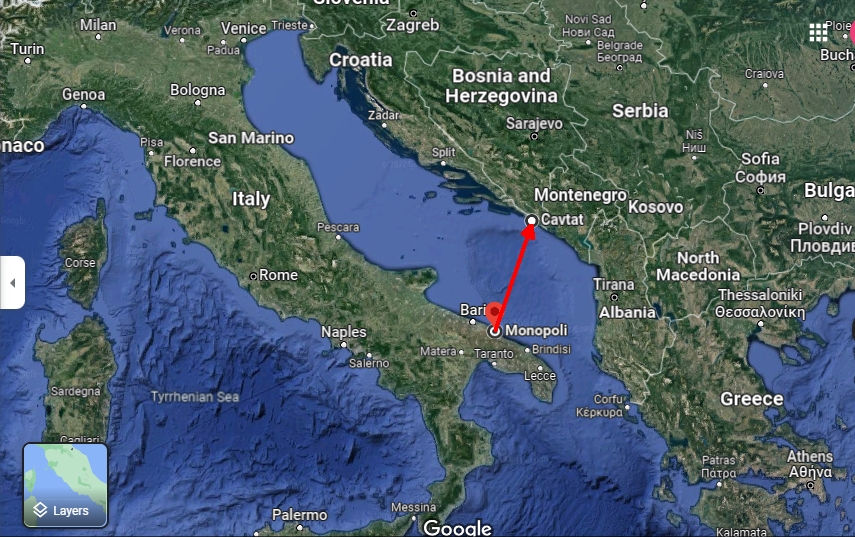