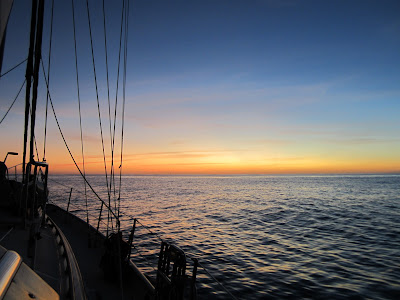 From Trip South Fall 2011
A few days ago, we left Carolina Beach after getting our boiled peanut fix (for some reason they are really popular there) and headed out the Cape Fear River inlet with Slick with a questionable forecast- wind was on the nose but if it stayed light, we could power through it. If it didn't, it would be a crummy trip to Charleston. Well, it turned out to be oily calm for most of it. We got to the turnoff for Charleston in the wee hours of the night and decided this was our chance to make a run for Cumberland Island (FL state line) or risk getting stuck in Charleston, so we beared off and kept going. We hope to meet up again with Slick in Florida somewhere. We motor sailed the rest of the way for another 24 hours or so under sunny daytime skies and moonlit, star filled night skies. It was a great trip. Until we hit the trade winds, we have no problem motoring since east coast wind is so variable it drives us nuts. One minute you're barely moving & the sails are flogging, then the next you're on your ear. We saw lots of dolphin, a big sea turtle and several loons. While we were in Beaufort, we bought a huge bag of locally grown mixed mustard & turnip greens for two bucks along with some southern ham. So one night we had them and I made cheese grits. The second night I roasted a chicken with sweet potatoes so even though we sort of missed the South, we tried to eat like we were there!
Yesterday morning we pulled in at dawn to Cumberland Island on the Southern border of Georgia- a national seashore. We quickly spiffed up the boat and tore ashore to hit the trails. This is the third time we've been here to this dreamy, special place and nothing has changed. Like the sequoias in California, this is one of the only places you can stand under loads of ancient oaks, draped in spanish moss, surrounded by cabbage palms with feral horses rustling among them. Almost all of the island is park and there are beautiful sandy paths that you can walk on along with miles of trails. There are backcountry campsites that some people come over by ferry to use. We walked 12 easy miles enjoying the feel of this unique place. It definitely warrants more time but we don't have it. One thing though was we didn't see any armadillos. Last time they were everywhere, and they didn't seem to see for anything. We came back to the boat and practically collapsed since the lack of sleep from the trip catches up to us the evening we get someplace. We only get 6 hours of off-time per night in 2 hour segments because of our watches, so we sleep like rocks the first night we're stopped. It feels so luxurious to get into bed and know that you can just sleep without someone tugging on your foot saying "it's your watch!"
Then today, we crossed the state line into Florida on the waterway although the fog was so thick early on that we navigated strictly by radar & electronic charts. Whoever said you don't need radar here!? This is a very interesting part of the waterway to me. There are seabirds everywhere you look, including white pelicans & osprey. Everybody has got a boat and is out fishing alongside the grass beds. There is a relaxed feel and finally, the breeze is warm and you can be comfy in shorts and shirt. You also pass by the back yards of miles of fancy houses. Really, a lot of the waterway is like that since it is all waterfront property. It's interesting to mindlessly peer into people's yards and see how they've got them set up. There are still many holdouts among the mansions with funky, old Florida styles and less than Pottery Barn décor.
Tonight we're anchored with a handful of other boats in a little creek just above St Augustine. It is really pretty but we are now in no-see-um territory so there is no hanging out in the cockpit for sunset. It is button up the hatches and keep those darn things out. Tomorrow we plan to stop in Daytona and with any luck I can get ashore for a run.