We found the best of the Marquesas 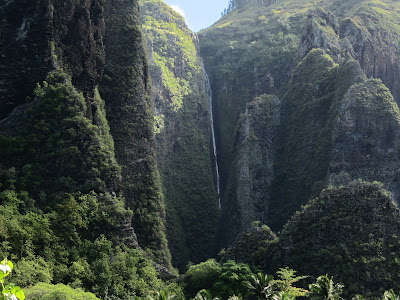 6/6 Tonight, we're back in Taiohae Bay (the main town) on Nuka Hiva after a few days at Hakatea Bay where the Vaipo waterfall is located. It was pure heaven there and our favorite anchorage in all of the Marquesas. The welcome calm anchorage is stunning with high mountains all around such that we could rarely even connect with our Ham radio due to the bowl effect. At the head of the harbor was a white sand beach where we shared bonfires on 2 evenings. A short walk around the point on a pretty trail led to a tiny village with only a few little houses and loads of well tended gardens. Continue on an ancient, flower lined path that was once a road many years ago with tikis and paepae (stone house ruins) along the way, it then shrinks to a trail leading to the Vaipo waterfall. The cruising guide says it is 2,000 feett high, but it's hard to tell. The best part is the canyon that you walk through on the final approach. It has a pinkish light with bright green understory and birds soaring overhead- quite beautiful. There is a sack of hardhats there to wear for the occasional falling rocks. We swam at the base where there were crayfish & fresh water eels, although the water wasn't clear.

The village is in a cove adjacent to the anchorage and a path ends at a lawn that flows to another beach and there's a little channel that winds up the stream that comes from the waterfall into a backwater that you can dinghy through. The water is primarily fresh at this point and calm, so pretty. A friendly couple sells fruit and offers cruisers a lunch as long as there are at least 6 people willing to do it. So 6 of us went yesterday. It is held at their outdoor dining table. I believe I understood their names to be Tuo and Teiki. Our French has not improved and our Marquesan is even worse! Tuo gave each of the girls a flower to tuck behind their ear as is the custom. We had fresh limeade with mint, hand gigged fresh water shrimp in coconut with bananas & breadfruit, watercress salad with grated local "apple" with fermented banana dressing and then a big fruit salad for dessert. The watercress grows along the stream bank. Teiki showed us how to husk a coconut on a tool he uses to husk hundreds per day since copra (dried coconut meat for making oil) is a major export in the Marquesas. Then he gave us each a coconut to take with us. We went to another house a few gardens down and bought some fresh lettuce & cucumbers right off the plant. This was the best meal we've had in these islands and the whole experience was so much fun.

We hiked to the waterfall again this morning to get some exercise and then tore ourselves away from the anchorage to head back over to town for internet. We have to order another autopilot pump but the company is in the UK which makes communication difficult. We hope to have it ordered by the morning and then head off to the Tuomotos, about a 4 day sail away. These are a group of 76 or so islands, most of them coral atolls. They cover about 1,000 miles of ocean but cruising boats usually only visit the ones on the NW section on a path to Tahiti. We hope to visit about 6 atolls and spend about a month total there focusing on scuba and free diving. We've been meeting lots of interesting people and although we're all heading to different spots, we generally leapfrog every few days which leaves us continually running in to each other.

The Marquesas have been really interesting & fun. Jon wishes they were even more remote than they are but I like to see people have modern things and still maintain many of their traditional ways. In most of the islands, the people have 4x4 vehicles (and they need them!), nice, simple homes, and a good infrastructure to the towns which is refreshing coming from Central America. There are very few tourists, no taxis and few cars on the road. Although, what made Hakatea so special was that it was so remote and yet it appeared that the people living there had most of what they needed although they do have a major town a few miles away (only by sea) to get provisions. We've also been met with such kindness here. The other day, we were headed over to a hardware store and a man called out to us from his house asking if we were off a sailboat. When we said we were, he offered some bananas. We said we'd take a few and so he walked us over to his back porch and cut half a stalk which is about 25. He wouldn't take any money, he just wanted us to have some.

We all find it funny that the local currency, the Polynesian Franc, has some very large bills that don't fit into a normal wallet. You feel like you're holding a diploma, suitable for framing, not a $50 bill. I don't think we'll ever get accustomed to the afternoon break for businesses which basically means that from 11:30-2:30, everything you need is closed. Look down at your watch during the day and you'll realize it's either too late or too early to do whatever errand you need to get done! We're getting a little weary of baguettes but the alternative is our own homemade bread which despite kindly advice from our blog readers & other people, hasn't improved much. I think a good part of it is it's just really hot here and the boat is in continuous motion making it hard for anything to rise I should think. We go to the ATM hoping to get some AC time in while we're taking out cash but other than that, it's pretty hot all the time except in the early morning before the sun comes up. They just had elections here and a few of us joked that if we could put our two cents in, we'd ask for whole wheat baguettes that don't run out, a better dinghy dock, unlimited produce and a big breakwater to cut the never ending swell down.

So it's been a good life lately, despite some frustration with things breaking every few days. The other night, Tim asked me why our anchor light wasn't on and I looked up, knowing I'd turned it on- it was burned out. Now, this is an extra special low current LED masthead light that is non-serviceable so replacement is $300. Then Jon was showering a couple nights ago and the sump pump stopped pumping- it was burned out. Mind you, it was the original pump but still, why everything at once? We had a spare and he installed it so we're back in business but now there is no spare! Fortunately, you don't have to spend a ton of money to be here if you're careful and the things we love most are generally free. On a recent walk with Tim & Nathan we talked about what simple things we'd like to have once this cruise is over. Someday I'd like to have a kind sized bed that I don't have to climb up into each night. Nathan wants to have a new pair of socks for every single day and never have to wash them again. Tim wanted to change his toothbrush every couple of weeks and Jon wants his own workshop. But none of us would trade what we're doing now for any of it so we'll keep putting our socks in the wash bucket and climbing up into bed and keep the workshop on the back burner for sometime later. Because it doesn't seem important right now.