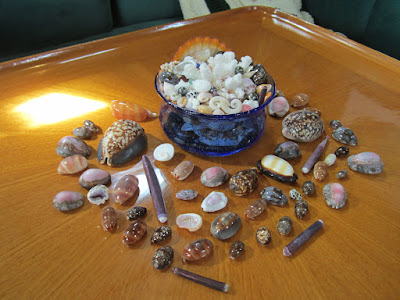 From Tuamotus
Written 7/3
Happy July 4th! We could go for some good 'ol USA summer food right about now! Or at least I could, since I'm pretty much over the stomach bug I had for the passage here to Rangiroa, but then less than 2 days later, Jon got it so he's still suffering as I write this. Hopefully the worst is over.

The last dive we did in Fakarava was of the outer reef and it was really nice. It was a quieter dive in that there wasn't much current but then there weren't as many packs of fish or bottom formations either so it wasn't as exciting. That said, we saw a manta on the reef and another one from the boat on the way to the site. It was an absolutely flat calm afternoon so the water was like an aquarium. There were still loads of fish. We took some nice pictures and saw a leaf fish (elusive like the frog fish), but only because Serge, our divemaster, pointed it out to us. There were 2 other men on the dive with us, one of whom was from Montreal and of course like most border close Canadians, he'd just been to VT a couple of weeks before since that's where he fuels up and buys groceries. He's been coming to the Tuamotu for vacation for 15 years!

The next day we left and headed over to another atoll named Toau. We were the only sailboat there for the first day so had the whole place to ourselves. The next day one sailboat came in but we still kept the solitude. All we did was snorkel all day for 2 days. We'd bring a lunch and all our gear and then head out to the barrier reef which had small sandy islets with a couple of palm trees, great reefs in shallow water and light winds to make it comfortable. We tried two deeper reefs further inside the lagoon and the water wasn't clear but just inside the barrier reef it was clear as air. Since we anchored down at the SE end of the atoll, we were too far away from the pass to scuba dive it. Jon was in heaven & so was I since these are the kind of days that make us happiest. We came back wrinkled and waterlogged and sat on the foredeck (which we rarely do) to share a bottle of wine and watch the sunset. It's hard to believe it can be this good. 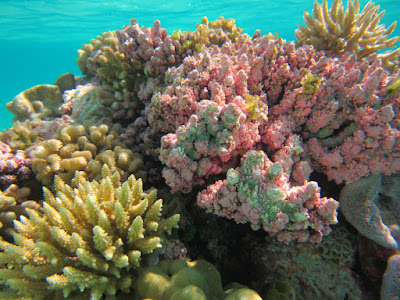 From Tuamotus
It seemed like we should have stayed in Toau longer but we were nearly out of dinghy gas and really needed some fresh groceries so we headed out for an overnight to Rangiroa with a forecast for light winds, to be filling in. In the late afternoon of the first day, the autopilot officially crashed, not to be revived (we have a new motor sitting in Tahiti) and there was no wind to use the windvane. So Jon took out the back-up tiller pilot that mounts to the windvane and once he made some modifications to the length of the stub paddle to get it lined up correctly, it started steering us. It moves the paddle like the wind would but using a compass course instead. Really a great idea actually. But even so, we were still a little shook up. What little wind we had was exactly on our stern, it was hard to keep any sails full and we had no sea room to bear off because there were atolls all around us and it was dark. One was only 4 miles away to port and to starboard, a few miles more. Mind you, we've found the charts for French Polynesia to be excellent but who wants to test it? So we ended up taking the sails in and rolling along, but on course at which point I became nauseous, thinking it was seasickness. I thought some peanut M&M's would be the answer. But it turned out it was a stomach bug or something so by 2am I was really sick. Then the wind filled in, we got 2 squalls, thunder, lightning, rain. Jon steered around the worst one while I was down below off watch, out of service. But then those cleared off, we could sail gently under windvane and it was a peaceful sunrise. We made it to the pass by morning, got in despite bucking the current due to poor tide program predictions and got anchored in a beautiful spot. I signed off for the next 19 hours to be in bed and Jon caught up on some internet stuff. 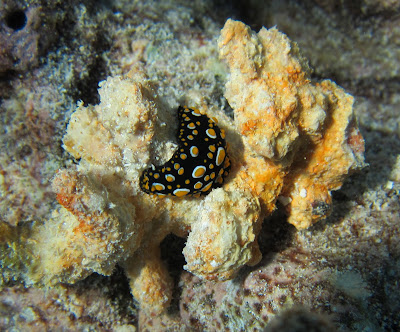 From Tuamotus
Yesterday I woke up feeling like a new person so we went snorkeling at a popular spot just inside the pass. It was fantastic! The water here is inky turquoise, the clearest anchorage yet I do believe. We saw some new stuff on the reef including a beautiful nudibranch, smooth cowries, varied corals. I also can't get enough of disk coral. And when we look at the ID book, the variety & intricate creatures that are coming up further west are incredible. One thing is there are virtually no soft corals so far- no gorgonians or sea fans which we do miss.

There is a fair amount of dive tourism and some overwater bungalows and other small resorts here in the anchorage; it has a happy feeling and we really like it. There are lots of sailboats here and a couple of megayachts, one of which launched a custom waterslide from the upper deck all the way to the water. If I could have... I would have...

We went into town and got much needed produce including oranges, apples & romaine hearts, all from the USA. It cost a pretty penny but I thought we deserved it. Then we went out for a really nice dinner with 2 other couples we met recently- Richard & Alison on Vulcan Spirit and Sue & Bob on Mawara (a type of horse) and had a wonderful time. We all got steak! Also tried the only wine made in French Polynesia (go figure!) that is made here and it was pretty OK. It was Richard & Ali's 30th anniversary and we were happy to share it with them. All of them sailed over from England.

Then at midnight, Jon was up with the same symptoms I had just recovered from so it was a long night and a quiet day today. I basically went through the boat with bleach shocking the tanks, changing filters, cleaning out the fridge, all the while trying to figure out if this is food poisoning, tainted water or something viral that we picked up in Fakarava. Don't really know. This is usually a healthy life.

So, all the things we want to do here are still on the list waiting for us to be healthy enough to do them. We've got a fair amount of researching to do to plan the remaining time after August 15th when we will be kicked out of French Polynesia. There are different potential islands groups to visit, each with their pros & cons and we just need to read up more before we point the bow in any one direction so that we'll be heading to places that we truly want to visit. I hear mixed reviews on American Samoa and on the Cooks due to roadstead anchorages, less than pretty harbors (American Samoa) and customs rules.

Anyway, that's the update. Health is everything, everything is on hold until until we have it back! Oh, and yesterday our email account got hacked into so now we're fixing that too. Hopefully no one opened up the link.
More
Comments
Newer Older
Contents