It's all about the people we meet 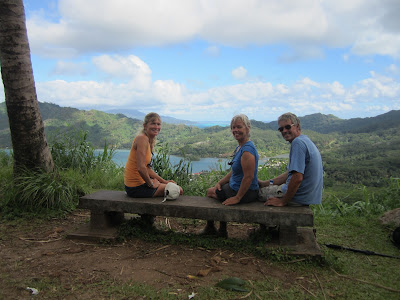 We weathered the latest round of maraamu winds in Haamene Bay on Tahaa and it was a great anchorage. You couldn’t even really appreciate the wind strength while tucked in there which was good! We did 2 long dayhikes with Bob & Sue on Mawari up onto the hillsides of Tahaa. The first day we hiked to the town of Patio on a pretty 4X4 road that made for easy walking. It gave us time to talk & walk and tell each other about our lives and plans. I’m learning more & more about England each day. We went to dinner that night at the Maitai Restaurant at the head of the bay and it was a great evening. We all got the fixed price meal that included a maitai of course, a nice salad, mahi-mahi w/ vanilla sauce & profiteroles for dessert. It was such a fine day!

The following day Connor joined us too and we did a different, much narrower (some bushwhacking needed) trail that led steeply to some views before descending to a little town a bay up from where we were anchored. We sat by the water & ate our lunches, then continued the rest of the way back on the paved road that circles the island. Once we got back to the boats, we all plodded up a different road looking for a vanilla farm to tour. After two tries, we did finally find the Maison de Vanille and got a little tour in French. This time I learned that all the vanilla has to be pollinated by hand. I guess they don’t have the regular pollinators here. Once picked, the beans are sorted for length, color (some still have some green visible on them) and then they are systematically dried outside in the sun for several hours/day over as many days as it takes for them to reach the correct dryness. We each bought some ground vanilla powder to try. Jon & I have seen several 3 legged dogs in these parts and were just commenting on how dogs seem to carry on just fine with 3 legs. But that day we also saw a 3 legged cow. They really don’t get around as well! 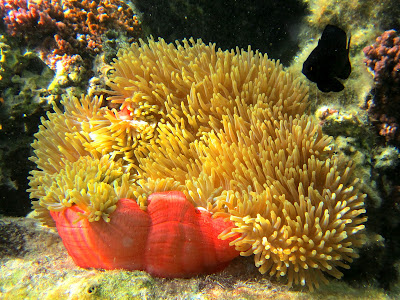 Next, we had a nice sail around to the western side of Tahaa so we could position ourselves to snorkel the next day away at a popular spot in between two motus- they call them coral gardens here. We spent most of the day yesterday in the water with Bob & Sue. We ate lunch in our dinghies bobbing around in the pretty water. There were several anenomes and this is the first time we’ve seen some of them closed. Then they kindof resemble a tomato. Often we see clown fish among the anenomes but none yesterday. We did see 3 octopus, lots of fish and even got a few nips from the lovely damsels. I said to Jon that I like the friendly personality of the butterfly fish and he jokingly said he loves the damselfish because they’re “rough & ready”. They’ve got a serious bad attitude! Just swim too close to them and they’re an inch from your mask letting you know.

And today, we finally motor-sailed the 20 miles to Bora Bora after looking over at it for the past week wondering what it would be like. We couldn’t join our friends in the mooring field at the popular MaiKai marina because all of them were taken so we ended up a mile away on a mooring at the famous Bloody Mary’s Restaurant. It’s nice enough, but when we sat at the bar to have a drink in exchange for the free mooring, we felt pretty out of place. It was full of charterers and people off of a cruise ship. We’re just a little too weathered looking, our clothes are a little too faded and too much has happened between Panama and here for us to fit in. We chugged our beer and got out of there.

This morning we were talking with Connor on Ardea who was anchored next to us. When most of us began our Pacific crossing, there was so much nervous anticipation. We’d never done a 3 week passage, we didn’t know how we or our boats would hold up, the lure of the Pacific was intense and we’d spent countless hours staring at the cruising guides & looking at pictures (not to mention fitting out our boats) trying to imagine what it was going to be like. We were also just getting to know all of the other boats heading across this year. Now the mystery is gone- together, we’ve seen a lot of French Polynesia and the time here is winding down. Now crews are changing, people are headed in different directions- some to Tonga, others to Fiji, then some to New Zealand and others to Australia or beyond. Some people we’ll never see again and others we’ll surely cross paths with. But still, things are changing. It pretty much sunk in today that we won’t see Tim on Slick again since he’s way ahead and has a different itinerary. And we said goodbye to the crew on Ardea today since they’re flying out and Connor is going to single hand for a bit. Barfly has moved way ahead too.
The problem with cruising is the bittersweet reality of meeting & spending time with people you really enjoy only to have to say goodbye before you’re ready. But I guess the positive side is that nowadays we have better communication opportunities than ever and those intense friendships can become long lasting ones if we stay in touch. That goes for friends & family at home too. I mean, we cruised with Jan & Rich on Slip Away in Belize in 2008, stayed in touch all these years, saw them once or twice since then, and now we should be meeting up in New Zealand in November! Sometimes I feel foolish carrying on these pen pal relationships or even this blog with such distance between visits. But Connor told me one of his favorite sayings which is: It takes a long time to make an old friend.

Well then here’s to old friends in the making! Cheers!