Still Soaking It In! 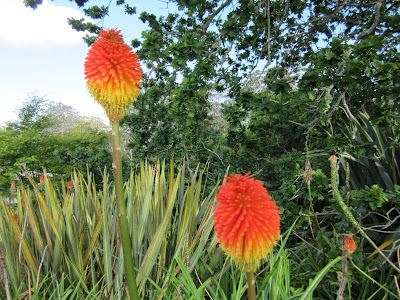 From Opua, New Zealand
I can't believe it's been only a week since we arrived in Opua. Getting here seems like it was so long ago. Boats are continuing to arrive but the bulk of the fleet is here. The boat that was asked to turn back in the storm (they were 2 days behind us initially) to rescue the crew on the sinking boat Windigo arrived today to the Q-dock- Adventure Bound. Everyone has been anxiously awaiting their safe arrival since what they had to do- turn back in 30 foot seas & 40-50 kt winds to cover over 30 miles back to windward was a monumental task. When the real rescue ships finally arrived & released them of their duty to stand by, they had no choice but to continue on where they left off, now exhausted, still in heavy conditions, but by then that meant they'd have another gale to contend with before reaching Opua! It's the kind of thing you have to do but you risk your life & your boat doing it. They received a warm welcome from all of us.

We'd all joined the Opua All Points Rally before jumping off for New Zealand and it was held throughout last week here at Opua Marina where we're staying. It was a fantastic welcome to New Zealand with tons of get- togethers with free food & drink, seminars, specials on gear and services and outings. We've been busy getting estimates on sails, working on the varnish, fixing broken stuff, looking at substitute supplies and making plans. We'll be switching varnishes, bottom paints, etc since the brands and availability are different here! The weather has been good but it is chilly- during the day when the sun goes behind a cloud, the breeze is cold & we're not used to it. Since electricity here is 220V, we had to buy a transformer so we could get power at the dock but Jon did get it set up so we don't have to run the generator for our power needs. 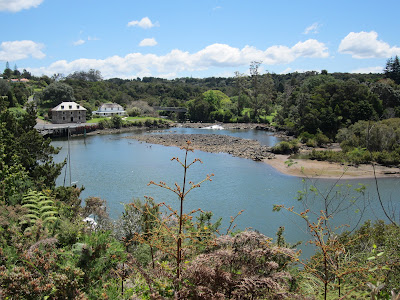 We've taken some nice walks and done some exploring. There are hikes everywhere you turn and really beautiful scenery. The climate supports wooded forests with fir type trees but they are amongst huge palms, fern trees like we've been seeing throughout the Pacific and also bromeliad type plants way up high in the branches. Flowers everywhere. Meanwhile, the Bay of Islands (Opua is part of it) reminds us a lot of Maine. Low tide exposes lots of beach and rocks and there are cedar trees along the cliffy shore. It really is a unique spot, at least to us. We've had local oysters on the half shell (provided free at the rally), we steamed green lipped mussels one night and we're enjoying locally made cheeses after so many months of the flavorless wax they called cheese in the islands. We visited a historic area in Keri Keri where New Zealand's oldest building is located, enjoyed the beautiful gardens and walked up to an impressive waterfall. So far everything we've seen is wonderful. We can't wait to visit the south island.

We scheduled our trip home to the US and will be leaving Nov 27th, planning to return here the end of January. Since Feb/March are the best months for exploring NZ, we want to be back in time to do that. It doesn't seem like enough time. We bought a car today! Never thought we'd be the proud owners of a minivan but after going round & round trying to decide whether a camper van was feasible & wondering how we were going to shop for one without actually having a car, we just broke down and got the van since it's the most popular thing going and we can now move forward. We've got wheels now and can also start getting it set up for the road trip we plan to start as soon as we get back here. There's a guy named Philip right here at the marina complex who runs a business called "Cars for Cruisers" and he's got sailors figured out. He gets inexpensive vehicles in good working condition and sells them to us with a buy back in 6 months less a fee. So in effect you get a car for 6 months for less than the price of a rental and no worries when you're ready to leave the country- he takes it back, or you can keep it. He knows you have to keep going to the ATM each day until you have enough money but he lets you take the car right away. He'll even store the seats that we're going to take out of it to make room for a bed & our backpacking gear. Anyway, I'll get a picture of it. This rod is our camper now and is complete with 2 sunroofs and built in curtains. It won't be a thing like the lovely Scamp we have sitting in Vermont but it'll do. It's so funny because everyone is buying cars right now since we all have similar plans and timeframes. We're still moving in a herd but it's been so fun, like a moving family.

So that's the update. Tomorrow we're headed down the coast 80 miles to Whangarei, where we'll be keeping the boat for the season. We're very excited to meet up with our friends Jan & Rich on Slip Away and to get the boat tucked in. Plus, I have some more TLC to give it before we leave. I want it to fare well in our absence.
More
Comments
Newer Older
Contents