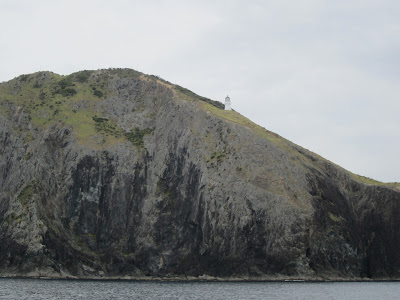 I'm writing this from 33,000 feet, moving at 568mph and it is -37 degrees F outside the glass of my window seat. Quite a change from the stats we're used to. We're on our way to LA and then onward to Vermont with nothing short of a marathon of sitting left to go before we get there. I have to say though, Virgin Australia scores a big 10 so far since this plane is huge, new and basically a big entertainment center. Everyone has their own interactive touch screen with a multitude of movies, music, TV shows and games to pass the time. We just had a nice dinner and I'm sipping a glass of complimentary wine. Plus, we somehow lucked out and got these seats which are off to the side, only 2 seats in our row, right next to the water fountain, head, our own overhead bin and no one behind us so there is no inching your seat back hoping the person behind you won't notice that they now have no space left to move. Plus they have the course map up so I know we only have 8 ½ hrs left of this 14 hour leg.

It was very hard to say goodbye to 'ol Evergreen after such an intense year of togetherness, not to mention the way we've been hustling to get it spruced up now that we're out of the tropics for a few months. We accomplished a great deal since Nov 9th when we arrived in Opua. Lots of delayed maintenance & TLC as well as a date & location for a haulout, a decision for a new sail or 2 (we need to improve our downwind sailing capability) and some repair work. We had a great time in Opua since it was the culmination of the Pacific crossing for this year and a reunion of the "moving family" we've sailed with over these past several months. They catered to us "yachties" as we're called, since New Zealand knows we're all showing up with broken stuff and cravings for civilization after so many months of island unavailability. When we were ready, we left with Mawari to make the 2 day trip to Whangarei. It was a short but beautiful trip through the Bay of Islands and around famous Cape Brett, down to an incredible anchorage called Whagamumu. I hadn't realized how strong an influence the Maori culture is in New Zealand and most of the names of places are Maori so we continue to not be able to pronounce anywhere we're going. The anchorage was stunningly beautiful and there was nothing there at all but park and 5 cruising boats. We took a great hike that afternoon marveling at it all. There were calla lilies growing wild in fields of the brightest, lushest green. The following day we beat all the way to the opening of the Whangarei River and pulled into a marina for the night to top up with fuel, empty the anchor chain onto the dock for washing and fix the windlass since a wire up in the bow had corroded from the rough passage. Then we continued up the river later the next day to our temporary home at Town Basin Marina. The coastline was so pretty and bold looking and we hope to have time to cruise it more before leaving. Not that it made sense, but we drove back up to Opua for a Thanksgiving dinner put on by the local yacht club because lots of our friends were going. It was very good and they even had a women's chorus come to belt out a few songs. 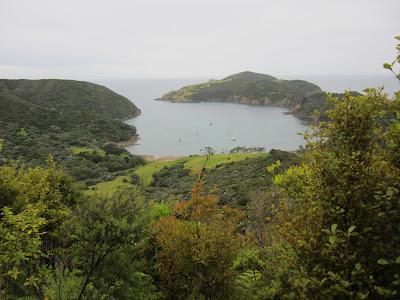 So the tourist information didn't lie. We are totally impressed with Whangarei so far. The waterfront area is beautiful, the marina is top notch and we feel good about where the boat is. Everything is at your fingertips and the running & walking right from the boat is fantastic. We haven't gotten to the museums, botanical garden, caves, quarry or Whangarei waterfall yet (all free) but we did get in some great trails, one nice run for me and a visit to the canopy walk which is a high, elevated boardwalk in the treetop canopy of ancient Kaori trees. We did this walk the day before Bob & Sue headed back to England, sort of for tradition. We got together with Jan & Rich on Slip Away whom we haven't seen in a few years and they're now minding our van while we're gone. Jan gave us her used suitcases since they just came back from the US with eight 50lb bags and now we're bringing some of these back with us since we have a list a mile long of things to buy, because one thing about NZ, most things aren't cheap. And we need a LOT of boat parts. I'm still getting used to the little packages of everything too. So we took one big suitcase, filled it and then nested it in another even larger one so that we could get it back to the US since it's a great bag, except for the floral print. But then it doesn't roll so well since it came from the Salvation Army, and it weighs 50 pounds so maneuvering it is quite embarrassing but so funny! We've had numerous legs on this journey so far and we're not even half done. Rowboat to dock, to bus to Auckland, to another bus in the city, to a van, to a hotel for the night, back in the van at 4:30a, to the airport, then thankfully checked the bags. If someone goes to search this heavy bag with an autopilot pump and various other large metal objects, they'll first notice that there are not one, but 2 suitcases there! Ridiculous! Oh well, this is what we do: haul things around all the time. If it wasn't this, it'd be laundry, diesel, propane, groceries or water!

Our impression of NZ is that it is all it was worked up to be. The countryside we've seen is strikingly beautiful with rugged volcanic coastline and rolling, green pastures & cultivated lands full of cows, sheep and flowers. The amount of trails for someone who likes to do all the trails in a park is overwhelming and what we don't understand is how they finance such elaborate trail systems. Even all the roads seem new and it's easy to get around & find things because everything is set up for you to tour around on your own. There seems to be a lot of ground to cover once we get back and it's hard to consider leaving it anytime soon. Although come May, winter will be around the corner and we'll have to move on to Fiji or figure out if we can stay.

I regret not keeping a daily log for this past year since it would've been nice to pull it all together with some stats but I'm not much of a recorder and neither is Jon. But it's been a great year, with lots of intense memories and a good sense of accomplishment for something that we've been working toward for a long time. Previous cruises were building toward this one. Jon seems to have added line fishing to the mix since we actually caught things this year and he did get some spearing in too so he didn't get too rusty. We did so many multiday passages we can't count, and we all comment that if we have one that's only 3 days, we don't even think twice about it so it's become easier. We visited 8 countries, numerous island groups and while islands do have their similarities, you can appreciate the cultural differences of each or special things they have to offer such as wildlife, diving, whales, mountain hikes, and local festivals. And when we tired of these things, we sailed over the horizon to someplace new. The freedom & peace of that is addictive.

We're excited to come home for the holidays and see the people we've been missing all these months and recognize it's a privilege we're allowing ourselves to do to stay connected. I'll put the blog on hold since I hope our communication can be more personal for these next 2 months! It's been a great way to stay in touch and we'll pick it back up once we get started touring in February. Best wishes to everyone for a great holiday!