The Butterfly Effect (look it up during your next happy hour) 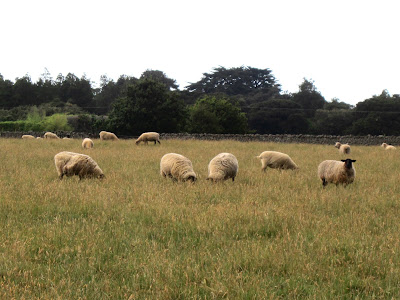 It's time for an update on the going's on for us. Now that we've gotten all of our bags back, we're absorbed trying to get some of the money back that we paid to have them sent here on a much more circuitous route than usual. We can put that toward a replacement pack for Jon & all the phone & internet minutes we've used trying to get anyone to care. Yesterday, I was on a 1 hour call and then a two hour call to American, again, and finally this pleasant customer service lady came to understand why we couldn't just claim for baggage damage from the airline we arrived in New Zealand with since they never saw hide nor hair of our bags. I think the reimbursement is in the works. I feel like I've been back at a desk job, minus the paycheck.

We can't start traveling around until we get the parts for our broken bikes that friends on Mawari are bringing back for us from the UK. There's a popular 150km rail trail on the south island that we want to bike on. We've found that NZ sort of works on island time and island unavailability principles. Can't get the bike parts here, can't get most pairs of trail running shoes sent here- all of these things violate some international trade rules. Some businesses are still sneaking up on the new year and aren't fully rolling again. We'll wait to have ou 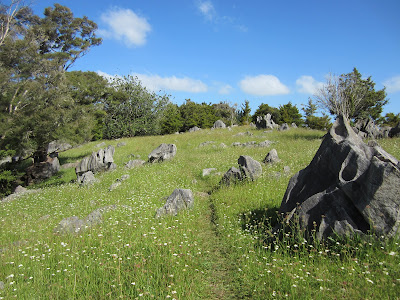 So we've been splitting our time traveling around locally and diving into boat projects. We have a Toyota Estima Emina but a friend of ours nicknamed it the Enema so that's it's name now. It's working out great. We've been on some great hikes, a really nice bikeride to Abbey Caves (but we decided not to ride the bikes anymore until all the parts are fixed) where we're going back tomorrow with friends to actually go farther into them than we did on the first attempt because our lights weren't bright enough. We did see a lot of glow worms and the trail that winds around the 3 caves has very unique rocks & scenery- a real jewel of a landscape. We spent a day with friends off the sailboat Chautauqua whom we first met in Columbia several years ago and recently found out they'd sailed in to Whangarei after 3 years in Australia. It's so fun staying in touch over the years and then meeting up again like that. It happens time & time again. We moseyed around town going to the Botanical Garden, library, Quarry Gardens and then hiked a trail back again before crashing at a picnic table with an ice cream cone that could've been three times bigger. The Quarry Gardens were interesting in that it was once a quarry but then the land became a park & community volunteers developed extensive gardens complete with trails that encircle the residual pond of the original quarry. Aside from feeling absolutely baked by the sun that day, it was a really nice spot. We find that the sun is very strong here- much more intense than coming across the Pacific islands. When it hits your skin, it feels like you're cooking. We keep reminding ourselves to be super careful. Must be that hole in the ozone layer? 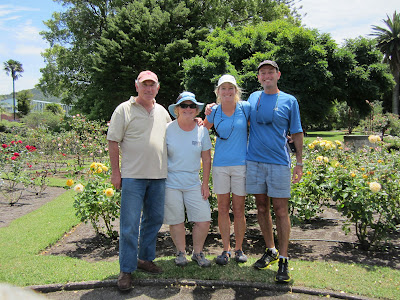 
We've had some great cruisers get togethers too. Recently we went to a potluck and it was bring your own meat to toss on the grill & then a dish to pass. I think we're all still going through produce withdrawals since everyone brought a fresh salad. You should have seen all the bright colors on our plates- no rice or pasta anywhere! Today was Saturday, the day of the popular Whangarei Growers Market. We got there at 7:30 and it was in full swing. There were loads of colorful tables laden with pretty much everything I could think of. We got fresh plums, peaches, lettuce, avocados, eggplant, parsley & honey. Then we headed off with Jan & Rich to go to lunch since we'd all bought half price Groupon vouchers for a restaurant. But this brings up another thing we've noticed.... store hours can be very short or non-existent! The place was closed today for some reason. So we found an alternative, then went for a hike. We decided the biggest deal in NZ so far is McDonald's 50 cent ice cream cone.

The boat projects we've been doing remind Jon of the Butterfly Effect. Not familiar with it, he looked it up tonight on Wikepedia for me. Broadly speaking, it just means that the smallest thing can evolve into or affect something else much bigger a little later. One example is on the passage here, the masthead navigation light burned out so we flicked on the deck level ones but found that one of those was out too- it's no wonder with the waves they have to endure.When Jon took that one apart right before we left for the US, the socket disintegrated in his hand from corrosion, so we brought back a replacement, plus got the masthead light repaired while in the US. Upon taking the wires apart to fix it, we discovered they were brittle and in need of replacement too so that meant taking off the whole bow pulpit to run the new wires through. Well it would make sense to pull up the stainless fittings that hold the pulpit in place since we had that off so he went about removing the bolts for those when one broke in the hole. So off to buy more bolts & nuts, then try to drill the old bolt out. Couldn't get it all out so instead filled the hole with epoxy, let that cure and then put in a shorter screw. We finally got the thing back together today after 2 ½ days and that was just one of the frustrating projects we've been doing the past few days. One thing just leads to another, then another, including a few more trips to the hardware store and a few more hours before we can call it complete. But we are getting things done. And the hardware store personnel know us pretty well now. I just finished compounding the hull and realized I have a big lump on my upper arm from all that waxing on & waxing off. It also took me over 2 days to get it done. Brother, I am getting old!

Right from the boat, there are a great set of trails that are perfect for running including a steep climb up to a view of Whangarei and well beyond- you can actually look all the way out to sea. It is so beautiful. We really like this town. This week, we dinghied down the river with our spinnaker pole to bring it to a different boat yard for an extension. It felt so nice to be in the dinghy and reminded us of how fun it is to be able to zoom around on the water. We do miss being underway sometimes. We've been enjoying a lot of green lipped mussels. It works out that they're $1.30/pound. They've got a beautiful shell and are so tasty. New Zealanders know how to make cheese too and Jon, who wouldn't eat unmelted cheese for the first 40 years of his life, now can't get enough of the stuff. He always says that I'm his conscience (well someone has to be!) so he doesn't overdo.

I guess that pretty much sums up the life of the Evergreens right now. More to follow....