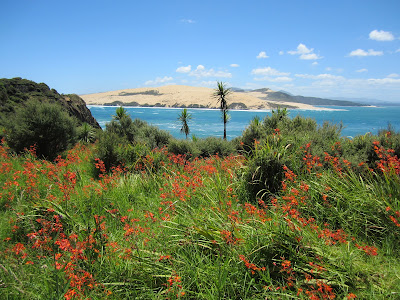 Our New Year's resolution was to try to stop rushing around with our heads spinning but just like some people's promised work out routines, we can't seem to stick to it- there's too much to do! We have done some interesting things though.

We did go back to Abbey Caves here in Whangarei with Richard & Ali and had a great time spelunking for a few hours. Abbey Caves was named after the English house that the former land owners had that resembled an abbey. There are 3 caves and all are explorable on your own. We did all 3 and each one was different but the first one was the longest. We walked in for just over 3 football fields worth of cave! Since there were 4 of us, we had plenty of light among us and you could see pretty well. There were the usual cave formations, but no bats or birds. We saw an eel, crayfish and a few huge bugs that I can't remember the names of right now. Water flows through the caves and at times we were up to our waist in water but mostly it was ankle to knee deep and clear. It felt really crazy to be in that far in a cave without a guide but then at the same time it was so open & obvious that you could see what you had to do. Once out of one cave, a pretty trail led you to the next one. The openings were filled with lush green plants and ferns and the air would get cooler as you'd descend into their dark world. The second cave was much shorter with a shallow stream running through it that was the path and then the last cave was very still, more open, but waist deep! Each one had it's won feel. We had a really nice time and there is strength & comfort in numbers so I was never afraid. 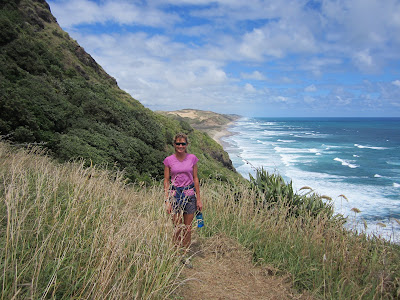 
We paused from our long list of boat projects this past week to steal away in the van for a couple days and try it out for living. We headed almost due west for 2 hours to the Tasman Seacoast of Northland. One thing NZ isn't short on is tourist information and there's a tourist bureau right next to our marina since we are right in the Town Basin, in the heart of Whangarei. We have "heaps" of info and nearly everything looks so interesting. Like a broken record, we all keep talking amongst ourselves that there just isn't going to be enough time to see & do all we want to. We have to either not leave or come back to it.

We went straight to the seacoast to walk on a coastal trail that was said to be really beautiful and it was. The Tasman is known to have plenty of wind and you could see it by the lean of the trees. The beach was covered in Ram's Horns and we picked up a bunch of them just for fun. They are the swim bladder capsules for a small squid that lives in the Pacific. These squid dive to depths of 1000 meters and these little gas chambers help them retain their buoyancy. When they die, the chamber floats away once they decay and lands on the beaches here and elsewhere. In all our years of beachcombing, we've only found 2 but they're known to be here in great numbers so we went out to find them. I took a picture of a design I made with some of them.

Then we went to Waipoua Forest where the most ancient Kauri trees in NZ are preserved. Tane Mahuta (means lord of the forest in Maori) is NZ's largest living kauri. We saw this and several others on pretty trails through the forest. All of the big trees have boardwalks surrounding them since footsteps can damage their roots. It always feels so moving to see something so old and huge and know that so much has transpired in the time it's been standing; so much more than we will ever be able to experience in our comparatively short lifespans.

At the end of the day, we knew it was time to get to a grocery store to buy some dinner fixings but we realized we hadn't seen a store since leaving Whangarei. Hmm... people have to eat here.... well, as we've found, the towns roll up by 6pm-7pm at the latest and just because you'd think something would be nearby doesn't mean it will be. I asked a lady where the nearest store was and she gave me that look and said we'd better hurry for 25km through the park to get to the last one that might be open. We made it, then backtracked at a more reasonable speed to the park campground. That night we camped at Waipoua Forest Campground. It was supposed to be a nice campground by the ad but we were a little surprised at how not nice it was and what you didn't get for your money. No distinguishable campsite to call your own, no fire ring, no picnic table (but I think this is common not to have these things). There was water for a time, then they ran out. There was a kitchen to cook in so that was good, and I guess it wasn't all bad that we couldn't do our dirty dishes that night but... that gave us more time to enjoy being in the van getting eaten alive by mosquitos since we had no netting and needed to have a window open for some air.

We busted out of that campground ASAP in the morning and proceeded to have a great day continuing to tour a little further northward along the coast. Hokianga Harbor was especially picturesque with an incredible trail that looked out over the water across to a huge sand dune on the other side that is of course all park too (seems like everything is). Another park had the Kouti Boulders which are the round
rocks along the shore that stick out like a sore thumb. 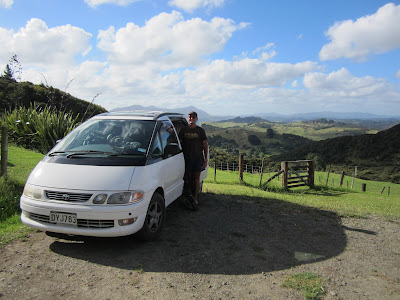 
The second night we found a more mom & pop type campground on a farm way back on a mountain road. It was perched on a hillside with a perfect view and their sheep framed the foreground. It was a quiet night for them so we had the place all to ourselves. We parked where the view was the best, and enjoyed the communal cooking area that was all for us that night and enjoyed the view from there. The owners, Nils & Lois, were very talkative and we learned a lot about sheep & cattle raising. In order to keep healthy sheep, you have to give them a bath frequently, especially their backside and especially if they get into some particularly green grass, or else flies will move in and infect their skin. It was fn having the sheep so close so we could study them. They had 2 dogs. One's name was Nell and she was the sheep herder. She was of course very well trained, relaxed and quiet. Then there was the terrier "Ruff" and he was the possum dog. I understand possums are a real problem here especially for the kiwi birds. Anyway, this dog had a hilarious personality and once again, was very well trained. He loved attention and would sit there looking all cute wanting one of our smoked mussels but if Nils motioned for him to go see Lois and leave us alone, he would tear off like a shot.

The second night in the van was just fine since there were no bugs and we slept well. But we did decide that a sleeping platform would double the storage space, we have to get a screen rigged and we do want to pursue being self contained so we can camp wherever. The next morning we left early to head back to Whangarei because we had plans with friends to go to Kiwi North, a museum here in town. We swung by the Bunnings (like a Home Depot) and Jon built a platform in the parking lot so now we have plenty of room for our clothes, backpacks, bikes and food. Jan lent us an air mattress so we sleep on that. We have a camp stove & water jugs too. 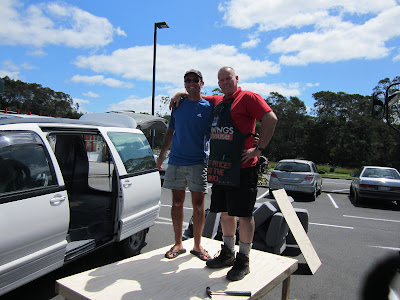 Kiwi North was interesting but the best part was the Kiwi house where we could get a good look at the elusive kiwi bird, the icon for New Zealand. They only come out at night so the exhibit was kept dark except for black lighting. Kiwis are flightless, about the size of a chicken, with a long beak. They have very interesting, soft feathers. They are the only birds that have a nostril on the tip of their beak and it is used for rooting out bugs & other foods. They will eat fruit too, if available. They are endangered because rats & dogs can kill them and their young or eggs and most every baby born in the wild will be killed this way. The craziest thing is the size of the egg inside the bird's body. It is HUGE! Typically, they lay eggs twice a year, two eggs, 10 days apart and the male will then sit on the eggs for 3 months meaning that half of his life is spent sitting on eggs! In the exhibit, there was one pair of kiwis. Even though they weren't a couple and didn't have eggs to sit on, the female kept making the male get back into the roost as if to care for the eggs and she would root around at will out in the open. When he did come out, you could see him moving leaves around and tidying up the area around the burrow as if doing housecleaning, but not for long before she chased him back in again! The volunteer present with us told us all about this relationship and we learned so much about the kiwi bird. It's pretty hard to get a picture in all that darkness but we'll post one that is sort of OK.

After the museum, all eight of 8 headed over to a gas station that Jon & I had discovered had $1 ice cream cones. For some reason, the girl scooping the ice cream took a liking to us and gave us these humungous cones. We were all cracking up walking out with all this ice cream for $8 but were saddened to find that the special ended the same day.

Anyway, now we're back at the boat getting packed to head out again. We figured out that the van is definitely livable especially with our latest "improvements". There are several of us getting ready to tour the South island at the same time so we hope to meet up some which would be fun. We feel sort of guilty not doing all that needs to be done on the boat but, this place demands exploration. It's SWEET AS!