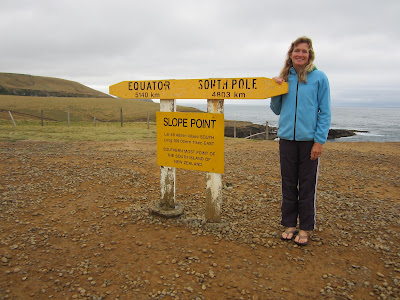 From South Island
Well we finished the Otago Rail Trail and spent the second night at a quiet campground in Middlemarch. There wouldn't be much of anything to these little towns if not for the bike path, which is heavily marketed, other than sheep farming. The campground owner was a sheep shearer by day. He was a stocky, super strong guy that you could tell never lost a bar fight. Fortunately for us, he left 2 big, cold beers in the fridge for us that we enjoyed on the front porch of our cabin after a long day on the trail. Then we cooked dinner in the kitchen area which was made out of an old caboose train car- very cute.

The following morning we jumped a shuttle back to our van, 3 hours away by road. The driver was an ex sheep shearer as well- no surprise since much of NZ is sheep farms. We've seen millions now. In talking with the guy, there are about 31 million sheep here now, down from 70 million. Polarfleece has dampened the demand but they do still /export a lot of wool. A typical sheep shearer will do 300 in a day and the sheep are penned a day before so athey cannot eat- to prevent them from messing up the wool and the shearer during the process. The going rate is about $1.60/sheep. aBy the time they get back out to graze it's been at least 24 hrs and they're hungry! They can shear as often as they want but longer wool is more valuable and they shear even in winter which can be a bit chilly for them. It's been really interesting to watch them being rounded up by the sheep dogs and to speak with the farmers here & there. When we got back to the van, we headed straight for the city of Dunedin and the Otago peninsulka which is on the eastern coast of the south island.

We've spent the past few days traveling along the coastal route from Dunedin through the famous Catlins area on down to Invercargill. It's been a great time! The road passed through orchards with plums, cherries and apricots, among grapes and pretty fields. Dunedin has a beautiful train station that is just over 100 yrs old, complete with stained glass windows & mosaic floors. Unfortunately, we had to spend a few hours in the library completing the paperwork to extend our visas but we got it done. We headed out on the peninsula to try to see NZ's unique yellow eyed penguins along with seals, sea lions and albatross, who are nesting on the cliffs at the tip. We saw everything except the albatross since the cliffs were blocked off unless you did a really expensive tour which we heard wasn't very good.We see them when we're at sea anyway. On a beach walk, we poked around near the rocks & Jon spotted the feet of a chick. It was so cute and every few seconds it would lower its head to peer out at us, then stand back straight so you could only see his little feet. We let it be and hoped for more sightings like that but we only saw one more. He was molting so he stayed up on the beach preening all day. It was nice to see seals & sea lions again but nothing will ever compare to the experiences in the Galapagos. We also saw a couple of Hector's dolphins but since it was a cloudy, cold day, we didn't get in to swim with them but you can, if you can stand the cold water. Unlike a lot of our diving experiences, these weren't so much encounters, where both you and the creature pause and study each other, they were more like sightings. But it was still fun to see them and this is likely the only time we'll ever get to see penguins in the wild, unless we do get to Antartica someday like we we want to.

In between looking for wildlife, we walked numerous trails through rainforest, up to waterfalls, through open fields along the sea with high cliffs and dramatic rock formations, and beachcombed for beautifil puau shells. We saw a petrified forest that is covered at high tide, climbed over huge sand dunes to get to specially built hides so we could view penguins without them seeing us and looked out over an incredibly blue southern ocean from Nuggett Point. There's a whole lot to see here, that's for sure. Despite the fact that there's a really big tourist media machine here- I mean there's a pamphlet for everyrhing, it is really amazing at all there is & how GOOD it is.

We finished out the region by going to Slope Point this morning, the southernmost point in NZ and probably the furthest south we'll get for now since we decided we don't have time to go to Stewart Island. Slope Point was a beautiful spot, we had the place to ourselves, it was perfectly calm and all you could hear were the baaa's of sheep. Quintessential New Zealand! We got a video but can't put it up till we get back to Evergreen.

Then we spent the rest of the day in Invercargill, walking through Queen's Park where we found rose gardens, a mini-zoo that included an ostrich, a museum, every kind of garden you could think of and we topped it off with fried mussels and blue cod fish sandwiches before leaving the coast to head back into the mountains. Now we're in Queenstown where we'll spend tomorrow getting organized for backpacking on Monday. Our friend Richard from Vulcan Spirit is joining us which will be fun.

We're terribly behind on emails and have all but given up on writing them. Just know that we think of all our friends & loved ones constantly and we'll be better at personal emails once we're back at the boat. Warm hugs to you all! Heather & Jon
More
Comments
Newer Older
Contents