A Labor Of Love

10 April 2013 | Norsand Boatyard
Heather
What a difference a week can make. One minute we're flitting around like tourists and the next we're neck deep in huge boat projects and the all too familiar life "on the hard" in the boatyard. The only consolation is we have the company of our friends. Mawari is now right next to us, literally inches away and Vulcan Spirit is within a stones throw. It's easier to work all day when you have company. The van has now become tool central rather than our home. Since we park it under the boat, it's now a dusty shade of green because of all the bottom paint residue. 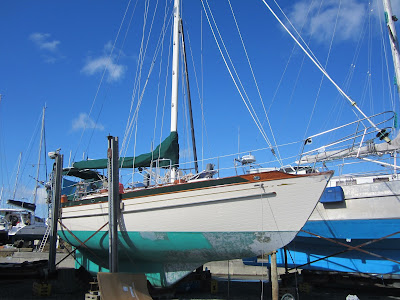 We are hauled out at Norsand Boatyard in Whangarei, about a mile from Town Basin. It seems like a really top notch boatyard and is well regarded here. They put you in a cradle rather than the usual Travelift and transport you on a trailer, then block the boat in the cradle and drive the trailer out from underneath the boat. It seems tedious but I think the boat is safer this way. We both have welts on our heads from banging into the crossbars of the cradle though since they seem to be in the way of getting to the sides of the hull. We dug right into our projects and we've got some pretty serious ones going. We're working long days, but rather than getting paid, we're spending "heaps" on must-do boat maintenance.

First off, we removed the rudder shoe because we'd noted play in the rudder after all the downwind miles. Seems most everyone we know has had similar issues. The shoe is worn and is already at the shoppe being fixed. Today, Jon lowered the rudder the rest of the way to examine the post and it looks OK. The rudder itself looks OK too. This is a relief!

This past weekend, we worked like dogs scraping & sanding the underside of the hull to take all the bottom paint off. It's hard to believe it's been 12 years since we'd done it last but it has and it needed to be stripped down. Jon says that a couple who strips together stays together, but this isn't the kind of stripping that I would consider fun! We are half done with this but had to switch gears the past 2 days to give our hands a break and to get the other projects that involve boatyard staff rolling. I have huge blisters on my hands from the scraping and all my tendons and muscles hurt, still. The real kicker though is that they don't make the bottom paint we're going to use in green, so we have to get black and that stinks! We are Evergreen not Everblack! Oh well, what can you do?

The anchor is off being regalvanized, the prop is off to service the rudder but then we can re-pitch it back to the way we used to have it before we re-powered since we know now that the old pitch setting was the right one. That ought to give us a little more speed for the same RPM which would be nice. We're also going to splurge on PropSpeed which is a silicone coating that is supposed to ward off any growth- we'll see if it works! We are forever having to scrub the prop to remove barnacles and other squatters and it really makes a world of difference in speed and vibration if the prop is clean. And if all this wasn't disruption enough, now the entire bowsprit is off the boat too! We'd been suspicious that water was penetrating areas of the bowsprit but we weren't sure. But then Jon was up in the anchor locker re-wiring the windlass and he noticed near definite moisture and punky wood. Since the bowsprit is critical to our rig, we had to dig into it to be sure it was sound and the end result was that we felt it wasn't, so off it came.

It's really hard being here without our truck and all of Jon's tools. The power is different here so whatever tools we buy we can't use back in the US and we couldn't carry everything we'd need with us either. But, things are moving along.

Our launch date is scheduled for April 30th and we're pushing for that date. Of course everyone who's fabricating stuff for us has to have their part done too or we'll fall behind but so far we're on track. It feels like a lot has to happen before we're ready to sail again. Never ending projects and one leads to another if for no other reason than you have everything taken all apart anyway so you might as well do such and such at the same time....

We got some good, inexpensive Indian food last night with Richard & Ali and have had some nice dinners together but otherwise we really have just had our heads down focusing on getting back in the water. Climbing up a ladder for everything, using the boatyard facilities and having no other life outside the boatyard gets old quick but it does feel good to be getting these things attended to. And if the passage out of NZ is anything like the one getting here, you certainly wan a sound boat and a good rig!

We're going to a wedding this weekend! Our friends Bob & Ann on Charisma (we crossed the Pacific with them) are getting married here in town at a B&B. We'll have to do a super duper scrub to make ourselves presentable but it sure will be a welcome change of pace!

Well, that's the big news from here. I was talking with Sue today (Mawari is right next to us) as she was scraping barnacles off the hull- they weren't coming off easy- and she said she was grumbling to herself at first but then started thinking that if each one represented the price for a fish she'd swam with over this past year, then it was all worth it. I said I would have to agree. It was so worth it. For me, working on the boat is somewhat of a labor of love. It does wear me down; the endless lists of things that need doing. But I can't think of any other means of transportation that is also a home that takes the kind of beating that a passagemaking sailboat does. Wind, waves & salt. Incredible forces on sails & equipment, constant motion, constant corrosion. You count on it with your life. It takes you places that you can't get to by any other means. So, a little TLC is in order.
More
Comments
Newer Older
Contents