Dust In The Wind

10 September 2013 | Port Vila, Vanuatu
Heather
Once again, we're doing an overnight. Grrr! We thought we were home free with overnight trips till it was time to leave for NZ but the distances between some of the islands in Vanuatu are too far to cover in daylight. Oh well, it's not a big deal since we're used to it. We've done some great downwind sailing lately and even got a chance to try out the second pole we had made in NZ for the staysail. It worked really well and was easy to rig. A good addition we think. 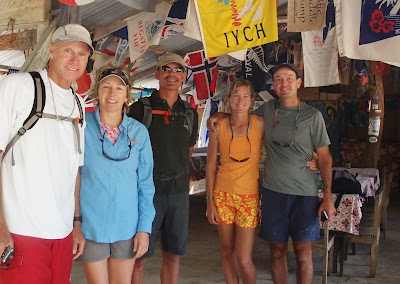 Since the last time I wrote something, we left the island of Anatom and did a daysail to Tanna. The best & I think only anchorage is Resolution Bay, named after Capt. Cook's ship. It seems this whole trip we've been following in his footsteps. The anchorage was beautiful with really neat cliffs at its entrance, hot springs flowing into the right side of the anchorage from several steaming holes, Yasur volcano in the distance and a cute yacht club set high on the hill to port. The yacht club was organized by the village there to help welcome cruisers and was full of burgees, SV Slick stickers and plenty of seating but there was no one around. The grounds were perfectly tended but we never saw a soul except for a cute little cat that didn't mind being given a LOT of attention from us since we're feeling a little pet deprived. This one was funny because you could do whatever you wanted with it as long as you were giving it attention and when it would meow, no sound would come out. It was mute!

We're still traveling with great friends on Victory & Blue Rodeo. We took a walk together the first day to check out the village and get our volcano trip set up. Tanna is beautiful with lovely foliage and cute little paths leading all over- mainly from the village to plantation areas where they each have their respective gardens. What struck me most were the huge banyan trees and all the treehouses. They seem to love to make treehouses. We got to know a few of the local people and one of them- Tom, showed us a fruit bat that was living in his house. He feeds it papayas and it supposedly chooses to stay hanging upside down on his ceiling! I've noticed that their homes have very little inside them. They do not have a lot of material things. Tanna is famous for it's coffee, which we were excited to try, but just like the yacht club, there weren't any souls selling coffee either. 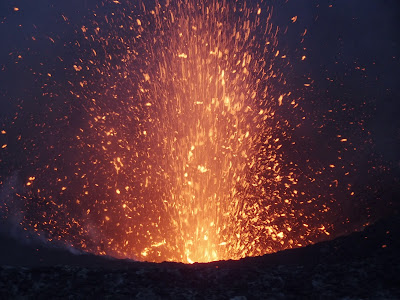 The big draw for most people is Mt Yasur, a very active volcano that's easy to get to. The taxi picked the 6 of us up early (3pm)so we could visit a "kastom village"- a traditional village named Etapu where we could see traditional dancing including the men wearing the nambas (penis sheaths). The grounds of the village were like a garden with carved tree fern trunk statues and beautiful landscaping everywhere. The dancing was set under a huge banyan tree and they actually emerged from the base of the tree at the start. They sing songs to make their music and dance around in a circle, all age groups represented, the women dressed in grass skirts, faces painted and no tops on. They used their hands & arms to cover their breasts. The men were wearing a type of namba with a brief belt but it didn't look like the ones we'd seen in pictures, so does that count? The dancing was interesting, but short and nothing compared to say..... what we saw in French Polynesia. The most interesting part for me was afterward, when the head of the dancers showed us how to make fire using 2 wild hibiscus sticks. It was dry wood and by scraping one piece against another with a great deal of pressure, the stick totally caught fire! I had to see it to believe it.

From the kastom village, we continued on up a very bumpy road to the park entrance for Mt Yasur. The "taxi" is a pick-up truck with some wood planks in the back for seating and thankfully, a rack of metal bars that you can hang on to. It's hard on the tailbone, hard on the kidneys and oh, freezing cold to boot! We found it to be pretty cool at Tanna but atop the volcano, after dark, with about 25kts of wind blowing, we were cold the whole time. From the carpark, a steep path goes up the side of the cone and once on top, you can peer down into the crater. It was loud, exploding every minute or so and ejecting fiery bits of molten rock way up into the air. After dark, it reminded me of July 4th but with all the fireworks in orange. Every once in a while we could feel the heat on our skin from the bigger blasts. The explosions weren't equal- some would be accompanied by a big blast of black volcanic ash and other times it would be whitish smoke. We watched until we'd had enough of the cold and then headed back to the taxi . I had a cup of hot tea that night and tried to imagine that I was in the tropics. The only thing Jon & I had to compare this volcano to was Picaya in Guatemala, which had flowing lava and plenty of spots where it was like standing on a BBQ but Mt Yasur is about the noise, the smoke filled explosions and the hurling of fiery bits to skyward. It was impressive in a different way. 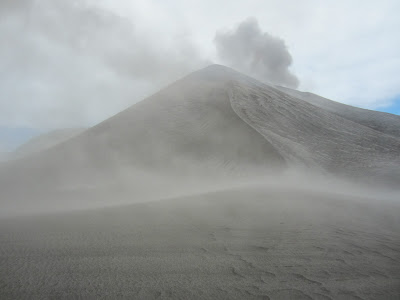 The next day, Jon & I decided to take our bikes out to tour the island some. The main "road" is 2 tire tracks since there are only a handful of vehicles on the island. Jon picked our route and it so happened that we'd be biking around the periphery of the volcano, including over the ash plain. The road pretty much disappears when you get to the edge of the ash plain since its just a huge windblown area of volcanic sand with the volcano blasting away overhead. The wind carried most of the smoke away but the falling ash and the blowing sand was pretty much like being in an eruption I think! I was pretty nervous at first since I didn't see anyone else around and us standing there with our little folding bikes seemed pretty....STUPID.... to me! But we decided to keep going to get to the other side since we knew the road would continue to villages over yonder. And we did climb out of the dust bowl, finally, to a village and a beach, out of the worst of the fallout. We had a nice picnic lunch over there, talked with a couple of the villagers and watched part of a soccer game, all to the "music" of the volcano booming overhead. I suppose after a while you just don't hear it anymore. Although I walked around most of that day with grit in my mouth, including when we were watching the game which would get to me after a while. I think I'd move. On the way back, we figured out that we could shortcut the worst of the ash plain and climb down into a ravine which meant we carried & pushed our bikes most of the way but no complaints out of me since I could breathe and keep my eyes open this time. There was less wind too and to my surprise, there were all sorts of pedestrians crossing or just playing on the plain! They were crossing over to Port Resolution like we were, some were just standing around, and we even passed 7 kids. I gave them each a granola bar and they seemed pretty happy. It felt so good to be back on the "right side" and we meandered back to the boat considering the day a success since we did something we'd never done before!

Our little rally picked up and left very early the next morning for Erromango, a fast, downwind sail of 53 miles. We averaged something like 7.3 kts that day- too fast to fish. Erromango means "land of mangoes" and sure enough, on a long 12 mile walk the following day, we saw plenty of very old mango trees, all in blossom. Too early to harvest any. We also saw some sandalwood trees which the island is known for since they export this fragrant wood to China. Since it was Sunday, we let the villagers be and just walked on a peaceful road with Mark & Anne to get some exercise. It ended at an airport that was dead quiet and it was nice to just walk & talk without seeing anyone else the whole way. When we got back to the dinghy, there was a pack of cute little kids practicing what little English they knew on us. We find that we often have kid escorts on shore but they don't usually venture too far from the village.

The snorkeling in the anchorage at Dillon's Bay was really nice in that it was great for vacant shells and the black sand bottom gave the water an inky green color. It was crystal clear with lots of rock formations and alleys to swim through. We spent the day today doing some boat maintenance and then snorkeling before having an early dinner & setting off toward Port Vila. We probably should be staying to explore Erromango more but we're craving civilization. Probably since we had to have canned vegetables for dinner tonight since we're all out again!

Wed, Sept 11
A sad day in our memory. I'm sure everyone will always remember exactly what they were doing that morning. Well, we're in Port Vila after an annoying overnight to get here. We had some wind, no wind, more wind, too much mind and then just enough wind. Each type instigates sail changes which equals no sleep. Since I noted a stripped out screw on the staysail furler recently, we didn't want to use it until it could be fixed so we went with a double reefed mainsail for the high wind part of the night. Problem was, we were going too fast and the winds were building. I was sitting there worrying about what we would do to reduce sail further without using the staysail but luckily, it settled down and we never had to do anything. We went ashore yesterday to scope out the town and mosey around. I got an American style hamburger and a chocolate shake for lunch which sat in my stomach like a bomb but it was worth it. We were in bed passed out by 8pm but we feel like normal people again today. Am working on putting up some pictures but will probably head out for some much needed exercise this morning. It's great to be here, I really like the harbor and the veggie market was even better than I thought it would be. I have fresh dill!