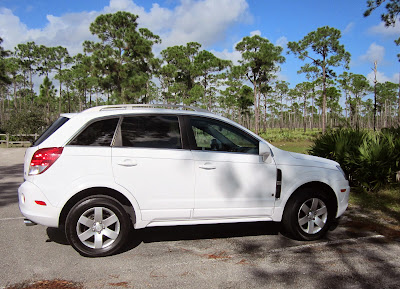 Just an update to say we're still alive; I've had a bit of writer's block lately. Not to mention, we seem to be very busy trying to get everything we have planned done in the time we're home. We had a good Thanksgiving in Vermont with my mom & dad & got to do some cold weather running in snow. It wasn't too bad. My mom & I pretty much made the whole dinner together and it tasted great! Then we met up with Jon's parents and did a 3 day roadtrip in their car down to Vero Beach. It was pretty painless and I think a good bonding experience! It is amazing how much ground you can cover in a car with good roads compared to a sailboat- a whole different way of travel. But by the end 3 days, I think we were all set with the open road for awhile.

You can't complain about the weather here- it's just lovely. In Jon's parent's area in Vero, there are still sand roads with orange groves and cattle ranches within a few blocks of their development so Jon & I have been running most days and have seen some great birds along the way. We're sure the same bald eagle is still here from last year, hanging out in the same tree. We got a laugh from the DJ on the radio today when he reported just for kicks that the high in Minneapolis today was set to be -1 degrees. It's 85 here. Phew!

When we were up in VT considering our options about transportation for this time at home, we decided it made sense to try to get the truck running (stupid idea) and use that rather than get in to buying something just to store it again. It started right up, we pumped up a flat tire and then Jon drove it out of the shed. But, when he went to apply the brakes, the fluid poured out of a rusted line so that pretty much determined that we were going to need a different vehicle. The pile of things needed to revive the truck is more than the truck is worth. So... we got on the stick soon after arriving down here and found a new, used car. We've entered the 21st century! We got a Saturn Vue and it's hard to tell it's a used car. When we were looking around at cars, you could clearly see which ones had lived in Florida vs up north just by peeking underneath. Like our truck, the rust is amazing. Signing the papers that night after a long day of looking, haggling and decision-making, was not amazing. A commitment??? We are not used to that. And answering questions about where we live, for how long, jobs, income etc, had us chuckling and the dealer looking puzzled. But it's great to have this done and to have wheels so we can move on with our agenda. The questions remains: store it or sell it but we'll decide on that later.

The packages have started arriving as we check things off the need's list that have accumulated over the past year. It's so great to have the selection & pricing of the USA; you really can't beat it. It appears diving was the priority since we got a new underwater camera on super sale & new wetsuits right off the bat. That feels good. I hope next season provides a lot of good diving opportunities. We're staying with Roland & Mariette right now and it's been nice to have some time together. Jon & I joke around about trying to be "as normal as possible" but we do sometimes slip and we have subjected Roland to large amounts of bagged lettuce! Mariette and I made several batches of fudge yesterday which was fun.

And today we're headed down to Miami for a few days to see Ann and whoever else we can. We plan to leave Florida after Christmas to work our way back up to VT making stops along the way to see friends and tour a bit. The time is going fast, but we're really enjoying each day.

We think of the boat and our cruising friends every day, hoping all is well. I think everyone we know closely who was headed to NZ has arrived safely which is a relief to us.

Best wishes to everyone for a safe & happy holiday, wherever you are.
More
Comments
Newer Older
Contents