Who Invited you For Happy Hour? 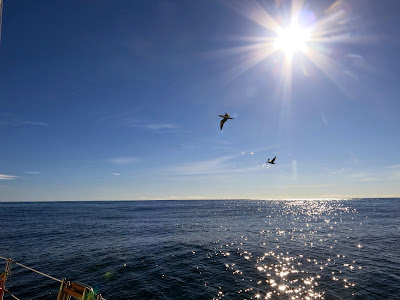 
5/31
Last night was one of those crazy nights on passage that we'll most likely never forget. We've been traveling through
a large high pressure area which accounts for the light conditions and last night we passed right through the center of it.
There was absolutely no wind and the sea, aside from the undulations of swell, was oily calm. We can't recall this ever
happening to this extent on a passage and certainly not in this part of the ocean. It was also crystal clear and there were
so many stars that you would never even consider that there wasn't other life out there beyond our reach. It would be
impossible. Shooting stars and passing satellites are frequent sightings on any night. The sea is full of phosphorescence
and in this circumstance, our bow wave was sort of slipping over the top of the water making a smooth patterned bright
green glow- hard to explain but crazy! And still, it is just us we see out here, for people anyway.
This morning it's another beautiful tropical feeling day and three birds came over to check us out. I think they're some
kind of gannet but not sure. When I took the camera out and starting snapping pictures, they started to fly even closer,
peering into the cockpit and sticking in a tighter formation, talking to either me or themselves. I kept willing them to
land since I feel like taking care of something. We've started to see flying fish again which is a good sign. Hopefully
they'll stay in the water rather than on our decks. We passed by a piece of flotsam- a waterlogged cardboard box, and I saw
a mahi and a bunch of smaller fish hanging out under it. We rarely see anything for debris out here actually. Unlike the
east coast of the US where hundreds of miles offshore you'll come upon a mylar balloon. Sometimes when I'm looking around,
I remember what Nathan, crew on S/V Slick told me once when we were on passage to the Marquesas. He was seeing much more
sealife underway than I was. He told me to just sit there and really LOOK around. He would often see mahi swimming in the
waves just behind their boat. But I've figured out that I'm not good at sitting still. Anyway, seeing the mahi made us put
out a fishing line but we had no takers.
Being that we've been doing so much motoring and we have more left to do, fuel is of concern if we don't get any wind. On
top of that, we keep running in to counter currents of sometimes as much as 1 kt, which inhibits our progress. Very
annoying! It's always mentally much better when you have a fair current going with you and you can sometimes subconsciously
attribute that to just how great your boat moves through the water but then when fighting one, you just feel like you're
being wronged somehow! There are a lot of underwater seamounts (essentially mountains) in this whole area which is why in
heavy conditions the seas can be so confused. A few days ago, we passed pretty close to "The Three Kings" seamounts and
noted a heavy counter current for about 18 hours. The usually very deep depths are interrupted by these massive mountains,
higher than most we've climbed and of course this disrupts the water flow around them. Yikes! I can't think about it too
much because it just plain scares me. We finally made it past them and as the words slowly moved off the bottom of the
chart and we got to the big blue screen without any soundings recorded, I felt relieved. It's better not to know. 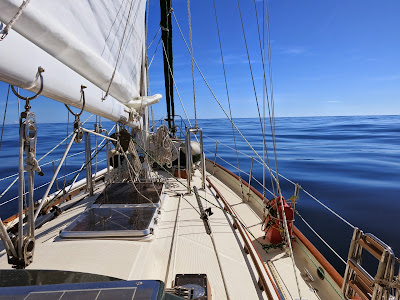 From Vanuatu 2014
Before we left NZ, Jon discovered that you can buy packs of meat pies to store in the fridge (no surprise since the Kiwi's
do love their pies!) and he bought some in anticipation of the first few cold nights. The routine was I put 2 pies in the
oven around midnight, I'd eat mine just before I knocked off watch at 1am and then Jon would awaken to a hot pie to start
off his watch. While this doesn't set the gold standard for nutrition, it was pretty darn tasty! But now the pies are gone
and so is the cold weather but our stomachs are still expecting this snack. We haven't found a suitable replacement yet &
don't think we will. I wonder what Australia's claim to fame is? Hopefully it's as good as the meat pie. I do notice that a
fair amount of the foods we enjoyed in NZ were either from Australia or there was a division there so I hope that there
will be some familiarity to make things easier. We grew to love a few specific foods in particular that the Kiwis make,
among them, great flavored humus, interesting coleslaw mixtures, flavored tuna including incredibly delicious yellowfin in
olive oil & garlic, crackers, wholemeal bread, healthy cereal, awesome granola bars and their carrots & potatoes. We sure
won't be missing hairy pork chops, "pet food mince" that is packaged exactly the same as people food hamburger, roll-on
deodorant or inexplicably expensive dental floss. Hmm. That's a pretty short list of gripes. We had to look really hard
this time for NZ's flaws!

6/2
We're now anchored at Anatom in Vanuatu! The motion has stopped, the boat is buttoned up from the passage and we're
anxiously waiting to go ashore and check in but the immigration officer is busy right now handling a cruise ship. Don't
think there's anything here for cruise ship facilities because there's definitely not! They have a little island called
Mystery Island where they ferry the passengers ashore for a few hours, then they ferry them all back to the ship, and then
the ship departs! It is the least invasive cruise ship port we've ever been to. The last two days of the passage went fine
too. The wind definitely filled in and we had more than we needed since there weren't many miles left at that point but we
needed to stretch it out for a daylight arrival. It ended up we only had to heave to for 2 1/2 hrs and then we came on in
to the anchorage and reunited with friends on Blue Rodeo & Gypsea Heart. It was funny that this whole trip, we felt like at
any moment everything could go to hell and we'd be getting doused with water in the cockpit with heaps of wind and confused
seas but it never happened. Therefore all of the extra taping I do to plug potential entryways through the dodger, engine
compartment door, taping up the dorade vent holes since water has come in those before in heavy waves- all of that was
unnecessary for this trip. Amazing!

6/5
Ahhh, we've been enjoying this sleepy little island as much as last season. Check-in was a breeze, we took a nice walk that
afternoon with Rankin & Sandy, Mark & Anne and then had happy hour on Gypsea Heart with "heavy hors d'oeuvres" (I love
that term). We were all chatting away until Mark noted some slithery movement out of the corner of his eye. Lo & behold it
was one of those black & white striped sea snakes coming in to the cockpit to sleep! They have a catamaran so access to the
cockpit is easy via the swim steps but goodness, didn't know snakes would be coming up there! This is a very poisonous snake but
we never really worry when we're diving because they have a very small mouth and the of course mind their own business. But
still... don't really want them on the boat! Rankin carefully picked him up with a boat hook and put him back in the water.
We see them all the time diving and Jon & I have also seen them way up high on cliff side trails because they come ashore to
sleep in crevices. We resumed our happy hour but we were all a little skittish after that. 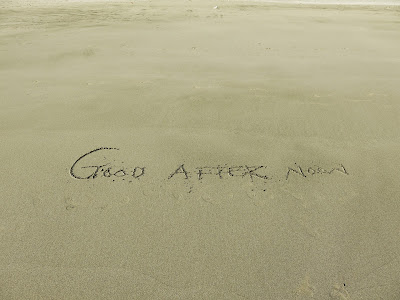 From Vanuatu 2014
We took that long day walk along the western side of Anatom with Mark & Anne. Jon & I discovered this trail last season and
enjoyed it so much we wanted to do it again. It follows the shoreline for about 2 hours, traveling in & out of several
coves on trail and beach until entering the bush to head inland and upward. Once on the inland trail, the scenery has a
little of everything- pine forest, clay cliffs, dry desert like volcanic areas and wooded areas with streams and lush
foliage. The thing that grabs us the most is that parts of this very long trail have been landscaped, typical of so many
islands we've visited. A handful of people pass by as this is the "highway" between the north & the south of the island. We
followed behind some local boys on the beach for awhile and they were writing messages in the sand for us. So one said
"Good Afternoon" and then a little later, one said "All Welcome". As we re-entered the village from our walk, we were
greeted by Henry, a friendly man who presented 2 bags of pamplemousse for us to have! It feels good here.
And yesterday, we got it the water for a snorkel. It felt so complicated, getting out all of the dive gear. We have some
new equipment like masks & fins and this was the first trial. But it was worth it, the water was really clear and we saw
some pretty coral, an oblivious turtle, a massive giant clam like out of a cartoon and a large school of ballyhoo. So,
that's what we've been doing. We're slowly getting back in to cruising mode and adjusting to the time change, recovering
from the passage, etc. All is well.