Care for a Glass of Water? 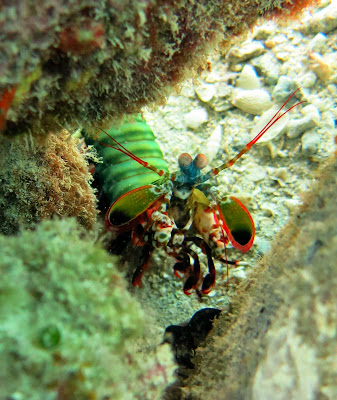 We've been flat out the past few days catching up on internet stuff & re-provisioning in Luganville but we made our escape yesterday and are back to being "away from it all" again. It's really nice to get to town and it's equally nice to get outta town too! As Jon & I sat on the settee the other night, taking a break from the internet, I looked over at him and realized that we were separated by two laptops and 2 power cords. Wowsers! It wasn't like that back in '97 when we did our first trip! Back then we had a GPS and an EPIRB- and a lot more free time.

When we left Maewo, headed for Luganville, there was a weather system looming so we needed to tuck in someplace. So all we piled in behind Ratua Island which is just a few miles away but worlds apart from Luganville. We loved this place last season and this year, our sentiment's the same. The anchorage is clear, full of life, there's a beautiful reef within easy swimming distance of the boat and the low key Ratua Island Resort welcomes yachties. Their clientele seem to enjoy the simple things. At any given time sun up to sundown, you find a few of them in or on the water in kayaks or paddleboards. There's a good vibe going there. Over a few days, we waited out the weather in flat calm conditions and stayed in the water till our feet & hands were white & wrinkled. We all dinghied over to a blue hole and swam there, we did a happy hour ashore at the resort one night, we took walks and did a few boat projects. We also met a couple in the anchorage on an NZ boat named Reflection and learned that they are active in trying to remove the invasive Crown of Thorns (COT) starfish from over-populated reefs. We've noted too many of these all across the Pacific in certain areas and in reading cruising guides on Australia recently, I can see they're struggling with them too. There isn't much on a reef that creeps me out but I have to say these do. They're about the size of a large dinner plate at their smallest and are covered in thorns. They move over a piece of coral, essentially throw up onto it, the acid dissolves the coral animals turning them into "polyp soup" and the COT slurps it up leaving behind a pure white skeleton. You can see their tornado path on the the reef and if there are a bunch of them in one spot, the reef will become a ghost town.

So.... our lovely reef at Ratua and another one nearby was covered in COT. Reflection provided us all with sacks and hooks and we went to work to reduce their numbers in these 2 spots. Jon & I removed 41 of them just between ourselves. We put them on an uninhabited islet nearby, out of the water. I had bad dreams that night struggling with my conscience, but it's also difficult to see something we care about and like so much being destroyed by too many of one thing. I resolved that done selectively in vulnerable spots, it's probably the right thing to do, like pulling weeds so other life dosen't get snuffed out. Anne and I both thought we could still smell them over the next few days, most likely because the bag we used to round them up was still in the dinghy for use again someplace else.

On our first night in Luganville- the "big city" on Santo Island, we went out to Beachfront Resort's steak night. Vanuatu beef is pretty famous. They do have really attractive & healthy looking cattle here. The meat is very lean and on the chewy side but good just the same. Anne & I both needed a haircut so we booked an appt at the local salon. We both walked in feeling good and just in need of a trim and then an hour later, we both walked out feeling bald and UN-beautiful. I watched my "stylist" like a hawk and felt like I was really on top of it until he stepped in front of me to cut my bangs, blocking my view of the mirror. A few short seconds later and a whirling of the scissors, he stepped away to reveal that he'd hacked off much more than I'd wanted. Dam! Needless to say, we don't need haircuts anymore and probably won't be able to face one for quite a while! 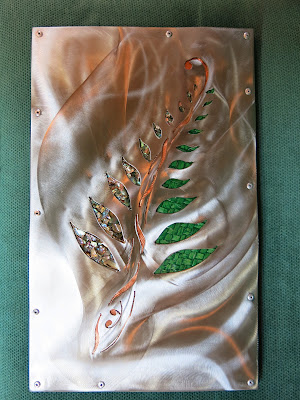 Oh and I know you've all been waiting with baited breath to hear about the fate of our watermaker parts. A few days ago, Jan on Slip Away turned box #1 of our parts over to another boat that was heading to Luganville for this past Saturday. Meanwhile, we pulled in to Luganville and started trying to track package #2 down. We went to the Chuan Building, where we'd had it mailed via DHL but the shipping office was locked. We started calling all the numbers on the door but no one answered. Nothing accomplished that day. We looked at the tracking online and got the name of the person who signed for it, then got an early start the next morning asking around if anyone knew "Noella". The office at Beachfront Resort was very helpful and made a couple of calls on our behalf speaking in Bislama, and finally located Noella and our box! The DHL office wasn't actually at the Chuan Building, it was about a mile away from there. We scurried over to retrieve it, then the boat Tara arrived the next day; we exchanged chocolate chip cookies for that package and today, we installed the new parts since we're finally in clear water again. We are now making good water with a TDS (total dissolved solids) of 140, rather than 800. Woohoo! We say that the watermaker's condition is still "guarded" and it won't be out of ICU until it has proven itself healthy over the next few days but we are hopeful that the prognosis is good! Meanwhile, we are enjoying water for happy hour....

While we had internet, Jon worked hard on our website VentureFarther.com to get the initial phase of KAP file generation (the ability to create satellite image charts quickly & easily online) up & running. Previously, creating a satellite image map was so tedious and sometimes they're the only thing we've got to navigate by since the charts are non-existent. Meanwhile, I wrote up & entered new markers for the places we've visited lately. Lots more to do but we can't be everywhere at once. Hopefully interest will grown over time and the markers will begin to multiply.

Over the past few days, we've gotten a bunch of rain (which was great for filling tanks), the most of which I think occurred as we all headed in to the produce market for one last stock-up before returning to the land of nothing. We got bananas, celery, limes, lettuce, peppers, tomatoes, squash, drinking coconuts, scallions, and something called "island cabbage". All this stuff takes forever to wash and put away only to peek into the fridge a couple days later to find a lot of it has liquefied like a magic trick. Jon & I are both completely burned out on island produce even though its only been a month & a half. What's wrong with us? I tried to load up on NZ apples and Aussie oranges because they're so good and they remain in the solid state for quite some time. 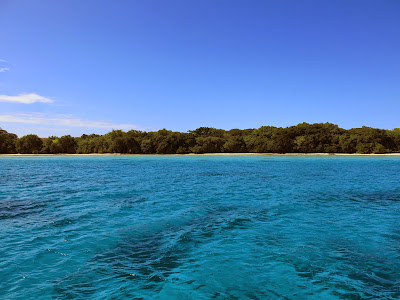 Well yesterday we awoke to clear skies and southerly winds bringing cool, dry air for a change. We left Luganville to anchor behind Aese Island, an old coconut & lemon/lime plantation with no village. It has beautiful turquoise water and nice coral plops for snorkeling. Late in the day, we headed ashore for a stroll with Mark & Anne. We started walking & talking and making our way to the windward side of the island but we kept getting blockaded by thick, thorny brush & huge spider webs. Because the only thing living on the island other than spiders are pigs, all the "trails" were only passable on hands & knees. Meanwhile, we were finding lemons & limes and stuffing our pockets and hands with them. After a fair amount of crawling on trails, running into spider webs and retrieving dropped limes, we realized that there was no getting to the windward side. We turned around but weren't sure exactly where we'd come from. Was this a Survivor episode? Cradling our precious fresh limes, we stumbled around for a while trying to get our bearings. Finally, we headed toward the pink hue of the setting sun to find our way westward to the anchorage. Phew! Back before dark, all limes accounted for. It was margaritas for happy hour and there are plenty for more. We know we can rest easy. They won't turn to liquid by morning!